This would be our last full day in Maggie Valley on this trip. It was hard to imagine where almost a complete week had gone but I guess that proves that time flies when you are having fun. I had a piece of the leftover Brickhouse pizza for breakfast after warming in in the microwave on a cardboard plate I cut out of the pizza box lid.

Last night, Huffy had said he and Cary would like to do the same route we did yesterday so I took his older Garmin Nuvi and successfully loaded the Gary Bohler GPX file into it. Today, I needed to get some paperwork done to be ready for the border crossing on Monday. The ArriveCAN app seemed to be easy to use but we'll see when we get there. The other task was to determine what we have to declare to Customs.

Slammer arrived mid-morning with Butterscotch Schnapps to share. It had been too long since we last saw Jerry and I have to say that he still looks just the same. All around, people were relaxing and enjoying a pleasant morning. 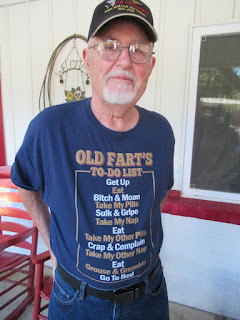 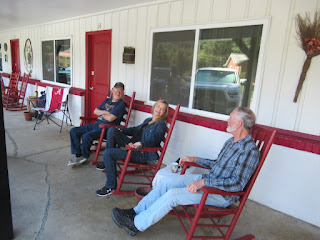 Slammer, Susan and Badger catching up 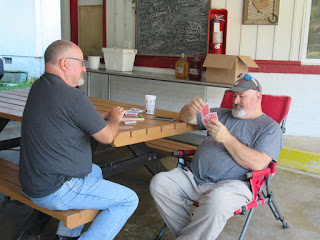 Willie Wonka wanted to go for a ride and Sandy and I wanted to go over to Two Rivers Lodge between Cherokee and Bryson City to say Hi to Blain and Kathy so we made that the objective. I told Willie it was his turn to lead and that all he had to do was to follow US 19. I'd tell him when we were there. He and Carlene took point followed Reed, Sandy and I and Butch. 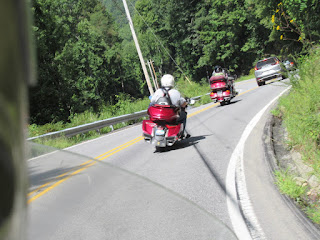 Riding down US 19 towards Cherokee 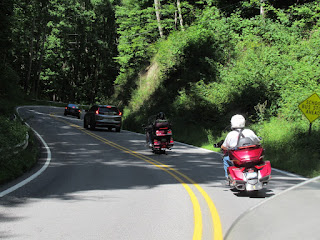 This is always a fun ride, even when following cars

We got to Two Rivers and found Kathy at home. Blain arrived a few minutes later and we spent some time catching up. It had been some time since we stayed here but it is a great location for riding the Smokies, more centred than Maggie Valley IMHO. The office still has the appreciation plaque presented by the Freedom Riders after they hosted the President's Ride here in 2014.

Blain told me Pappy had headed home yesterday. The lingering effects of long COVID were weighing more heavily on him than he had expected. We really enjoyed seeing him and were sorry he left but understood and hoped he would be feeling better soon. 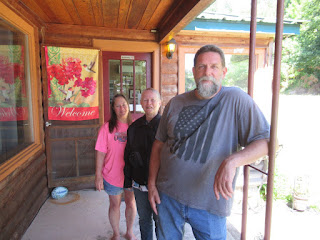 Willie and Reed wanted to go for a longer ride but Sandy had come along because I said we were just going over and back. I gave Willie directions to the Blue Ridge Parkway out of Cherokee and we headed out to US 74 through Whittier. The ride across the divided highway was nice but we kept heading towards a couple of building storms in the distance. Then we stopped briefly at the rest area just before Waynesville where I talked to a couple from Atlanta on a Harley. When we pulled back onto the road, the threatening clouds were gone.

Since this was the last outing for the bike, I stopped and filled the tank with relatively cheaper US gasoline. 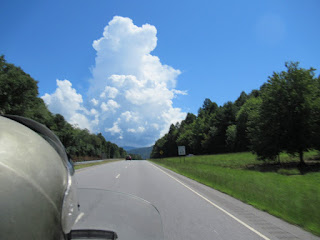 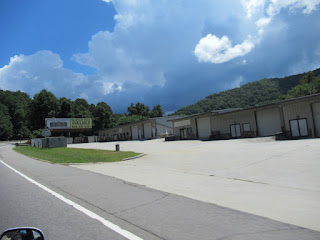 Back at the motel, we found that Flip and Renata had arrived by car from Greenville, SC with their new family addition, Kingston. 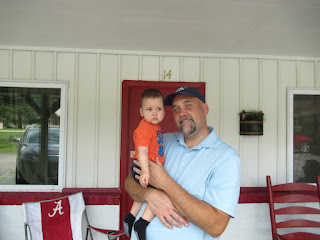 Kingston and his proud papa 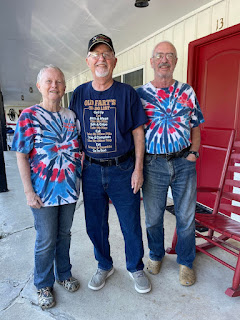 I had more day old pizza while Sandy had yogurt and snacks she had on hand while I got the ArriveCAN app completed, telling them that we would be crossing the Ambassador Bridge at 1300 hours on Monday. Posting the bills to Quickbooks also let me make up a list of the goods we acquired in the US that we would be taking home with us.

Sandy had been packing while I worked on the books. Then we loaded the car with everything except our overnight bags (the ones we take into a motel for a one night stay). After hooking the trailer up, I pulled it down into the parking lot and loaded the bike. It went flawlessly, which was good considering I had an audience. Then I parked the rig back in the field, ready for an early morning departure.

There was a group supper planned at Guayabito's Mexican Restaurant across the street. Sandy is not a fan of Mexican food even though she has hardly ever tried it. Something about not liking the texture. But she agreed to go, have a drink and see if something looked ok. I am not that familiar with Mexican food either, mostly because my wife won't go to restaurants that serve it.

When we were seated, Sandy ordered a pina colada and I got one of their signature margaritas. She ended up ordering something called a taco loco (a crispy flour tortilla shell filled with shrimp, lettuce, tomatoes, grated cheese and sour cream) while I had enchiladas supremas (one chicken, one beef, one bean and one cheese enchilada, all topped with shredded cheese, salsa, lettuce, tomatoes and sour cream). Sandy didn't complain and I found mine to be excellent. 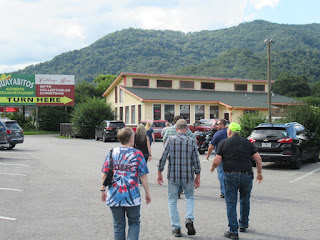 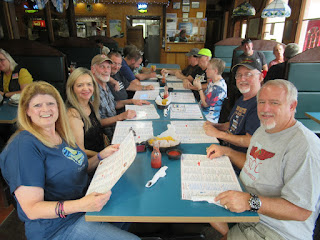 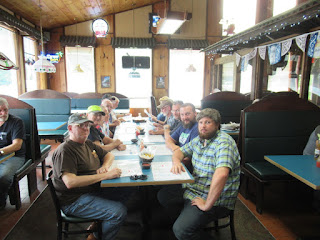 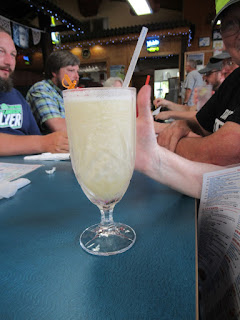 The pina colada was a good size 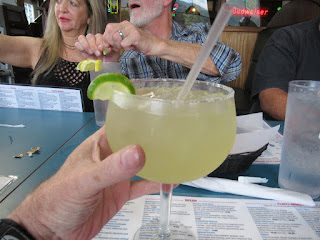 The MEDIUM margarita was bigger 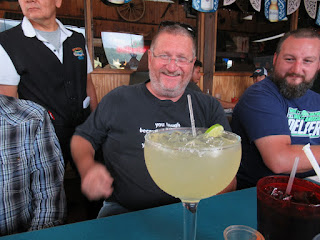 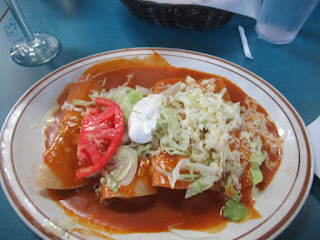 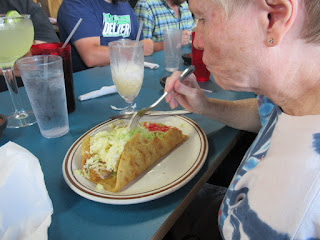 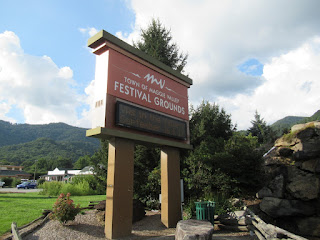 Festival grounds across from A Holiday Motel 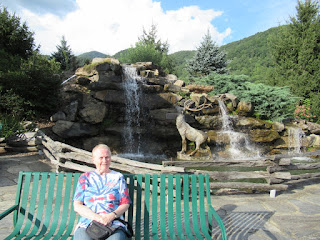 A relaxing spot to sit and watch the world go by

It was a quiet evening back at the motel as the rally wound down and everyone who would be leaving the next day mingled. It was surprising how many faces we hadn't seen in a long time had showed up this week. We even had Sherm join us on a Facebook messenger call. 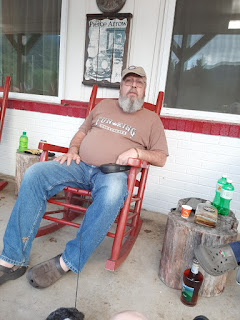 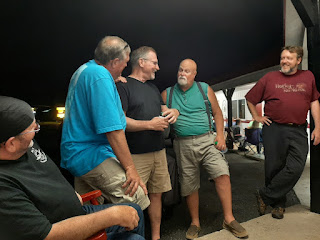 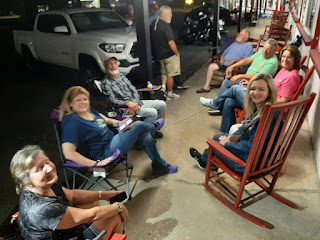 The mood was mellow - we should do this again

As usual, it was a little sad to go around and say our goodbyes before we turned in. But after three years of not being able to attend VROC gatherings, it was good to know that the magic was still alive. 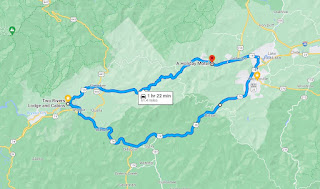