Before we went to bed last night, we both took COVID Rapid Antigen Tests. At least we will be starting the trip virus free. The box of tests is coming with us. 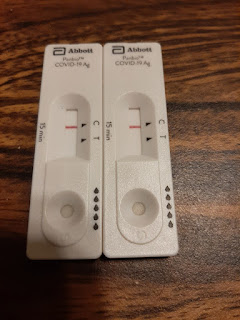 No COVID here
We rolled out of bed at 6:30 and threw what was not packed in the car yesterday into the overnight bags, filled our travel mugs with coffee and headed out. We prepared to drive over to the storage place to get the trailer but I had to stop and go back upstairs after I realized I had forgotten the trailer keys. Lucky I realized it before we left the property and not when we were trying to unlock the trailer to hook it up.
We brought the trailer back to the condo and I loaded and tied down the bike. The new floor loops I got from PROLine are much better than the eye bolts for keeping the hooks secure. The gear bag fit in the back better since I had moved the chock forward. Lastly, Don's Trailer set the trailer tires to the max sidewall pressure of 65 PSI but I knocked them back to 45 based on the actual gross weight. The maximum pressure would have worn out the center of the tread on no time given we are carrying just half the rated load. We were on our way at 8:10 AM under grey skies and 68 F temperatures. 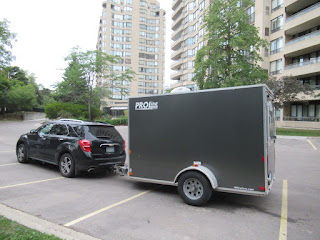 Ready to roll
We stopped at McDonald's on Sportsworld Drive and got our first On The Road McMuffin breakfasts before heading southwest on Highway 401 to the Ambassador Bridge to Detroit. It started raining in Ingersoll and I cut the speed back from 110 KPH to 100. It became obvious the 10 KPH made a large difference to the fuel mileage so we decided that we could take a bit longer to get where we were going. The rain eased up past London. 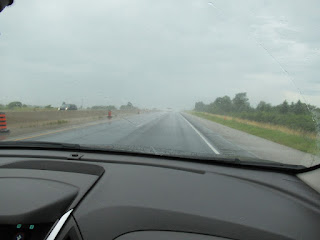 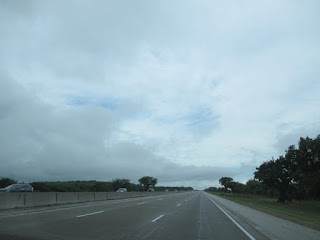 Then it cleared up
We planned to stop at the Duty Free because Top Shelf Distillers screwed up my order of Reunion Butter Tart Moonshine but I missed the entrance and we were on the bridge before we knew it. 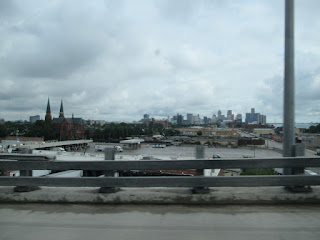 View from the Ambassador Bridge 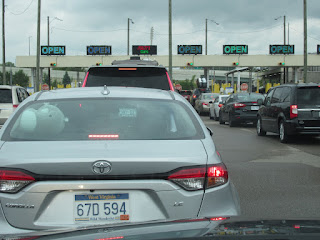 In the bus/RV/trailer/car line
The Border Protection Officer was thorough and all business. I thought for a moment we were going to be bound for a secondary inspection but he admitted us after hemming and hawing more than we were used to. We were southbound on I-75 by 12:25 PM.
I-75 in southern Michigan sucks. Where is isn't under construction, the pavement feels like it could be from a war zone. It made me question whether the time and distance benefits of this route over crossing at the Peace Bridge were worth it. Then we were in Ohio and the road got a lot better. 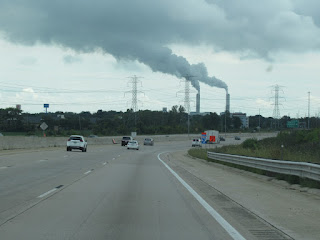 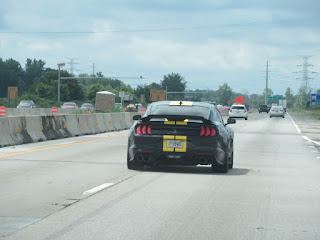 It had Cobra written all over it - really.... 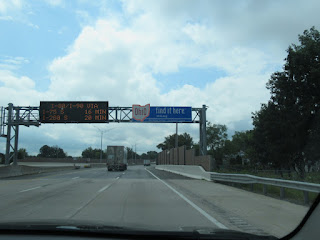 Welcome to the Buckeye State 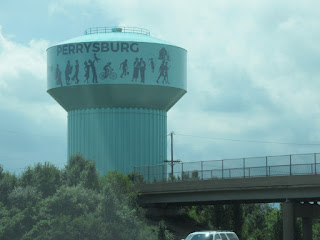 Perrysburg looks like a friendly place
Near Bowling Green, I stopped at a Speedway for gas, coffee and a restroom. Speedway lots are usually pretty spacious but this was an exception. There was a lineup for the bathroom and I couldn't get near a fuel pump so I grabbed a coffee and a sweet treat and we continued on. That is, we got moving after what I considered to be a pretty skillful job of backing up and maneuvering the trailer to escape the congestion in the lot. A little later, we stopped at a pleasant and not busy rest area to use the facilities. 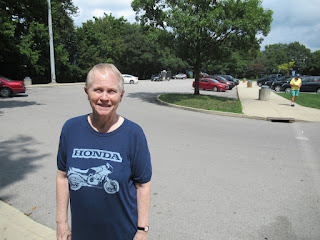 In an Ohio rest area
The next stretch brought us into some heavy rain. A torrential downpour saw us down to 45 MPH with the four way flashers on. It wasn't long before we were out of it but we could see weather systems all around. 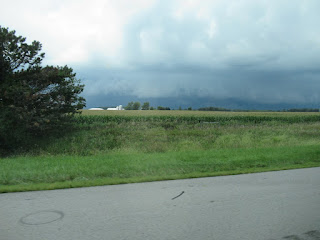 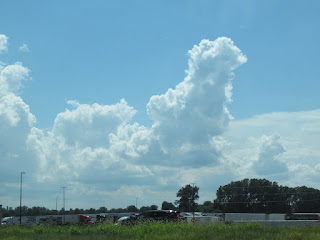 Looking better
As we approached Dayton, fatigue was getting the better of me. I didn't sleep that well last night and it was starting to show. We stopped at a Murphy gas station in a Walmart lot and fueled up. Then we went inside and bought some snacks, water and 5 Hour Energy bottles. It looks like Wally World is no longer carrying Zebra pens, at least in this part of the country.
Back on the road, I was feeling better. 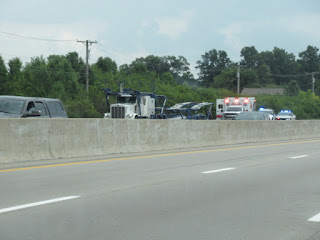 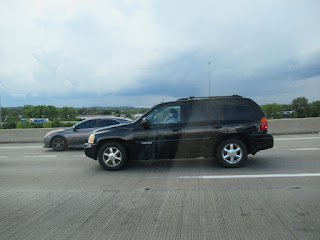 An accident waiting to happen
Things were going well until just after we passed downtown Dayton. Southbound traffic ground to a halt and we spent 45 minutes in stop and go traffic. It turned out that three lanes were funneling into one at the site of a particularly nasty crash. The investigators were doing their thing. From the looks of the one car I saw, I would think it was not a survivable incident. 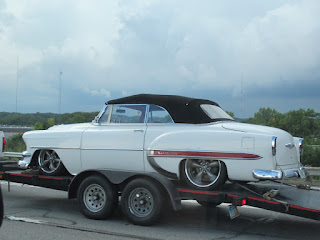 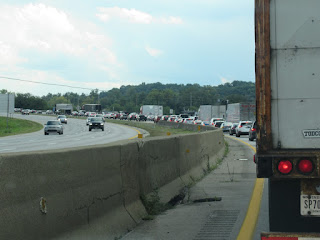 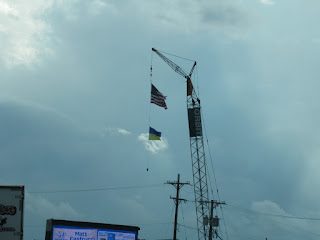 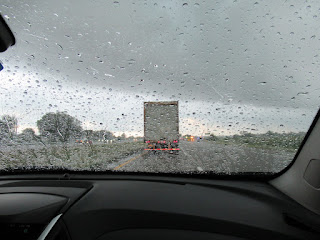 Rain started as we approached the crash site Lots of cops on scene
As we cleared the crash site, it started to rain. It was another frog strangler with us reduced to 40 MPH with the four way flashers on again due to lack of visibility. It did clear before we got to the Cincinnati boundary. 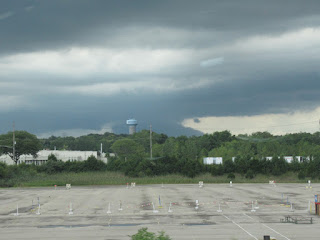 More dark clouds to the west of us 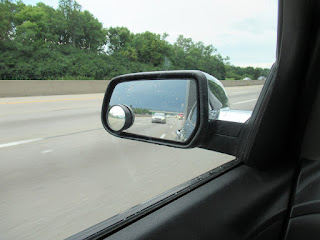 Happiness is this in your rear view mirror 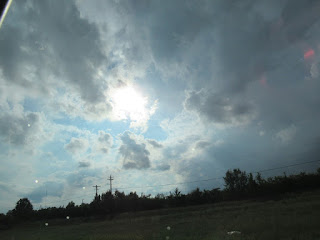 Blue skies ahead - sort of
Traffic through Cincinnati was brisk but not heavy. Soon we were crossing the Ohio River into Kentucky and starting up the Covington Hill to Florence where we had a reservation at a Hampton Inn. 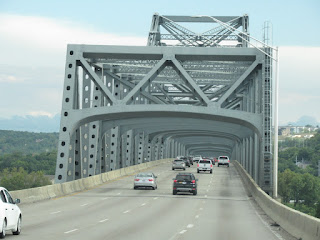 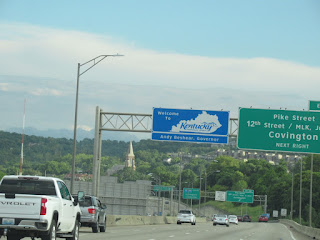 Welcome to Kentucky
We arrived at the Hampton just before 7:00 PM and got checked in. We could have done it on line but it was nicer to talk to a real person. Then we parked in a bus/RV spot next door and took our overnight bags up to the room. 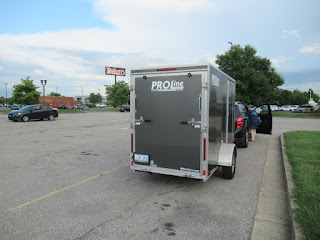 Parked for now
There was a Cracker Barrel Old Country Store, an Applebee's and a place called Rafferty's side by side adjacent to the hotel. The desk clerk said Rafferty's gave a 10% discount to hotel guests so we gave it a try.  Sandy had a chicken salad with croissants and potato bacon soup. I had chicken mushroom soup and a chicken Caesar salad. They were very good and we had a nice conversation with our server, who was here for a year on a visa from Jordan. 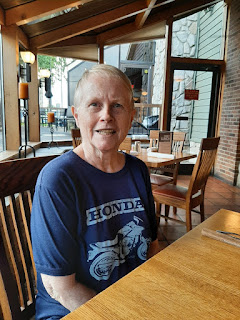 Sandy at Rafferty's waiting for food

Back at the room, Sandy climbed into bed while I downloaded and sorted photos, transcribed my audio notes, made maps and wrote the blog. The A/C unit kept pumping out cold air no matter how I set the thermostat on the wall. I did this because the sign on the unit said the wall thermostat controlled things. So I called the desk and was told to lift the panel on the unit that said to use the wall thermostat. Under that panel I found the real controls. Apparently they changed how things operated but did not correct their instructions.

We will enjoy the Hampton hot breakfast tomorrow and then head on to Maggie Valley. We just have about 330 miles remaining and check in time is not until 3:00 PM. Can't hardly wait to get there and see people. Looks like first day was a bit of an adventure without any serious consequences! Enjoy your trip!