Sandy and I were up at 7:00 AM again. Today, we had some Jimmy Dean microwave omelets that she picked up ay WalMart the other day. The weather storm said we would be good until 1:00 PM, when there was likelihood of thunderstorms moving in. I made an executive decision and decided we would take the shorter route today, which should see us back at the motel around noon. Willie said he was good with that. Thank you again, Gary Bohler, for all the work you have done sharing rides in this area. 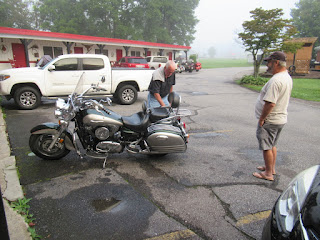 Carl watching Butch wipe the dew off his Nomad 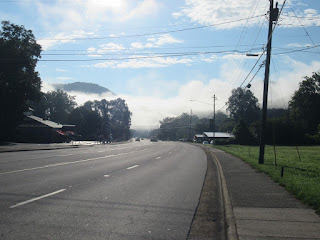 Through early morning fog I see....

Our group headed out at 9:00 AM sharp. I was in the lead, followed by Willie, Reed, Snubs, Pickles and Butch. Sandy chose not to go so I had no riding photographer. We headed out along Lake Junaluska and hopped over to US 209. This road starts out through rolling farmland but soon tightened down, making for a fun ride. It wound its way back and forth plus up and down. At one point, I was warning Willie (we both have CB radios) about roadkill ahead when the black dog laying in our lane looked at me. He made no attempt to move as we rode around him.

Our first stop was in the quaint little town of Hot Springs, North Carolina. The Lovely Carlene talked to a local lady who said that dog was always there. 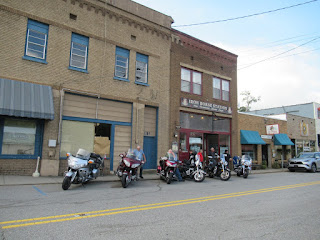 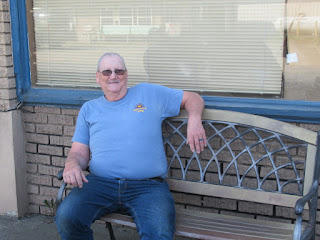 Willie relaxing on a bench on

We left Hot Springs on US 25/70 and followed it all the way to Marshall, NC. This stretch consisted of beautiful sweeping curves that rose and fell through the countryside. That changed once we got to Marshall and got onto narrow winding roads heading roughly southwest. There were some patches of gravel on pavement, particularly at the end of driveways, but we never lost the highway marking even though signs threatened it a few times. Eventually, we turned onto the more open NC 63 which we followed back to NC 209. From there, we retraced our steps back to Maggie Valley with a stop at Ferguson Supply for bathrooms and coffee. We got back to A Holiday Motel at 12:45, still dry under blue skies. 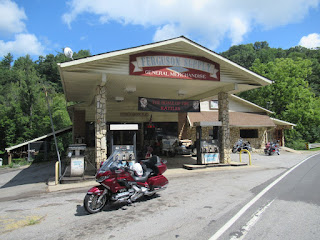 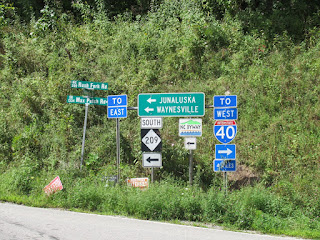 Willie, Sandy and I went down to Ammons Drive In and Dairy Bar for lunch. Sandy just had a root beer float while Willie and I each had a Double Super Cheeseburger. The menu said I could have mine with lettuce and tomato OR chili and onions. The server, who was a hoot, let me have both, which was a challenge to eat. For sides, I had hushpuppies while Wonka had onion rings. 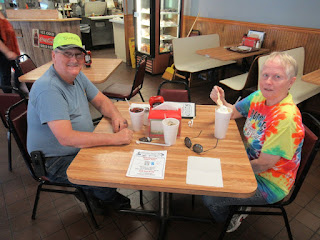 Willie and Sandy waiting for food at Ammons

We were going to ride NC 209 up to I-40 where we had seen cheaper gas, but we looked back up towards Maggie Valley and noted that black clouds were suddenly rolling over the mountain. So we hotfooted it back to the motel getting hit briefly in a few spots by some really big raindrops.

Again, we spent the afternoon visiting. It rained off and on but rocking chairs under large eaves don't care. 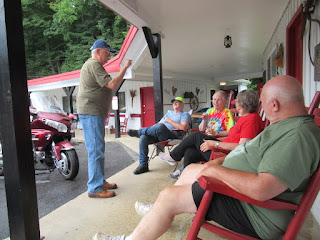 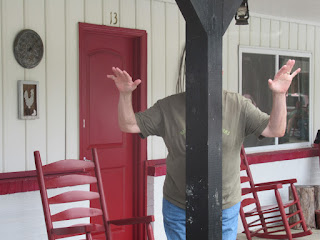 Talon pretending to be invisible 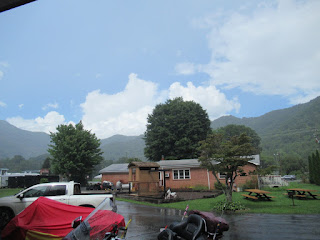 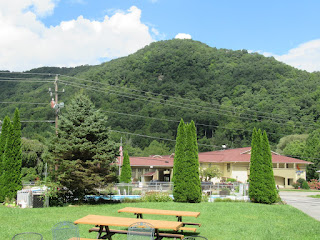 See the little patch way up the side of the mountain? 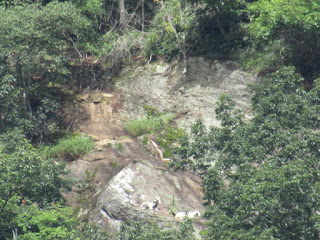 The excellent zoom on my SX620 Canon revealed the goats 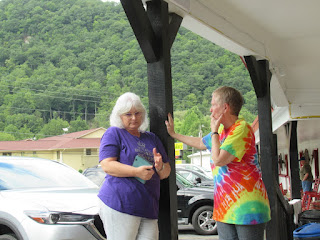 Scooter and Jan showed up 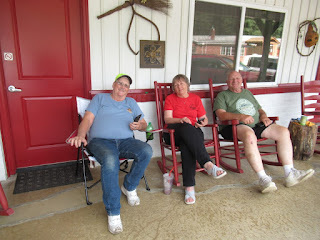 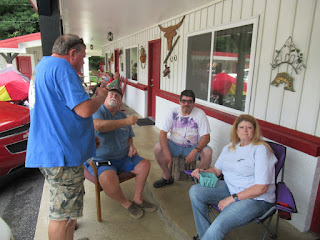 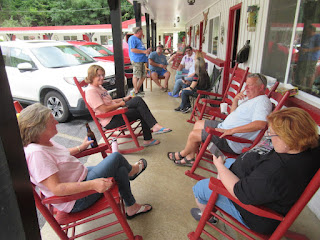 The rocking chairs were a major feature of the motel

We had not seen Sky King in a very long time. He and Gearman, who were traveling in the same car, joined Sandy and I for supper at the Brickhouse Burgers and Pizza up the road. When we got there, we found that another table had beaten us.

Gearman and Sky had burgers while Sandy and I ordered a large Maui Wowee pizza. This is a Hawaiian  pizza with both ham AND bacon to go with the pineapple. Sandy found the crust chewey but I though it was good. We both agreed that a smaller pizza would have done, since we took half of it home. 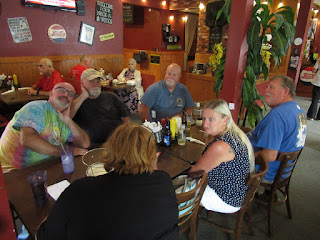 After we finished eating, we took Sky to the Bearwater Brewing Company where we had a beer. Not liking beer, I had another cream ale milk stout, while Sandy had water. I told Connor that my sunglass clip had been found.

Back at the motel, the mingling and drink sharing continued. Some serious rain arrived and we got a call that Wonka, Carlene and Reed needed rescuing from Guayabito's just up the street a bit. They had walked over and needed a dry ride home. I took the Equinox and, in addition to Willie and crew, brought Snubs and Pickles back as well. 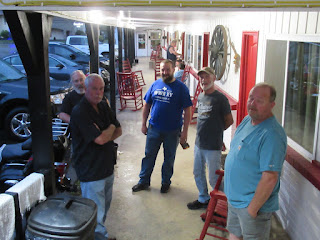 It was another pleasant evening with Sandy and I retiring about 11:00 PM. 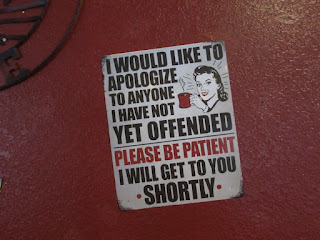 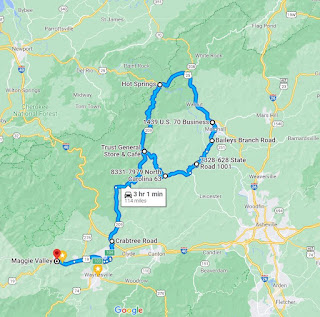