After going to sleep so early last night, we were easily up and dressed by 7:00 AM. We didn't have to leave until around 9:00 to be at the Ambassador Bridge at 1:00 PM, the appointed time I had picked when I filled out the ArriveCAN information two days ago, so we took it easy. The hot Hampton Inn breakfast had a wide variety of things but I focused on maple sausage and an omelet thing. Sandy is a breakfast minimalist, usually gravitating towards cereal and yogurt.

Back in the room, we took Rapid Antigen Tests. This was not a requirement for crossing the border but we periodically test ourselves after we have been out and about. This morning's results were negative again. What I am not looking forward to when we get home is the bathroom scale nor the glucose meter readings (I hardly tested during the trip). 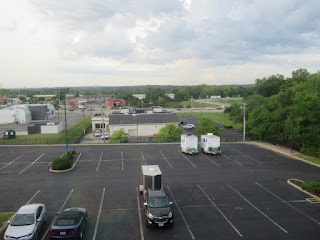 Not many arrivals overnight 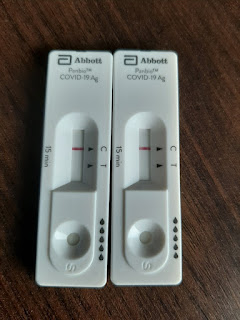 Always with the negative waves, Moriarty

We hit Dayton Monday morning traffic about 9:25 AM. It wasn't as bad as I expected. The 4 lane north of Dayton had very little traffic. 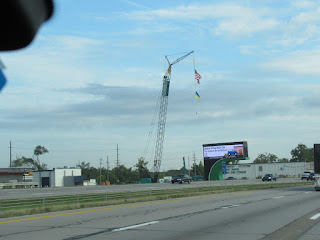 When we passed this flag southbound last week, we were stuck in a huge traffic jam 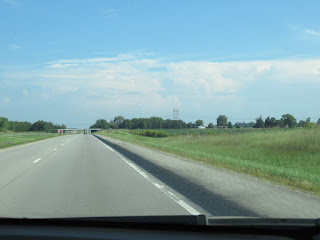 I-75 north of Dayton 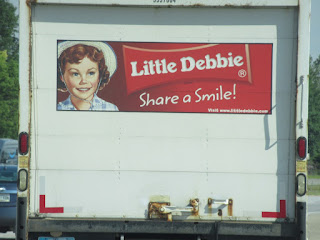 We stopped for fuel at a Speedway in a cornfield north of Lima (pronounced l-EYE-mah), Ohio. As we pulled out, the GPS said we had 118 miles remaining to the Ambassador Bridge and our ETA was exactly 1:00 PM. We hauled north with a purpose. 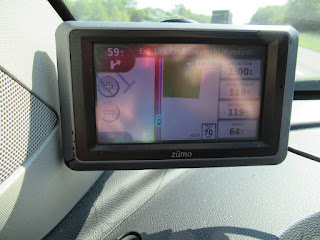 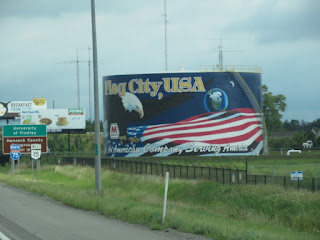 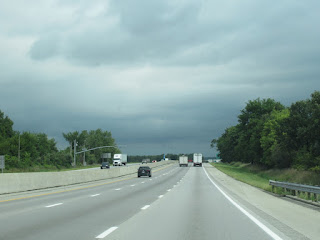 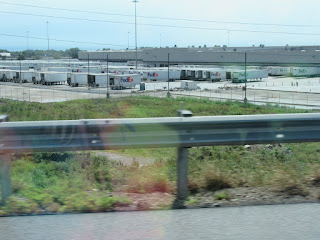 Cruising along, we saw another Cracker Barrel billboard advertising cheesecake pancakes and I once again regretted being diabetic. I bend the rules sometimes but I think a plate of those might put me into a coma.

In Toledo, the idiot GPS tried to have us exit I-75 to US 25 through downtown. This once again underscored the reality that using a GPS is an art, not a science, and you better have an idea of where you are going from other sources before you start.

We crossed the Michigan state line at 12:06 PM and the road surfaces immediately deteriorated. Between bad pavement and construction zones, I am really starting to think that a few extra miles and a little more time going through Buffalo would be a wise choice next time. When we head for Arkansas in a couple of weeks, I plan to cross at Sarnia and take I-69 south to Indianapolis. 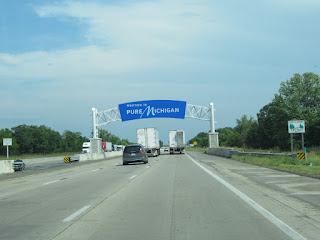 Southbound traffic was tied up in a couple of spots, first by a jackknifed rig and then by construction closing all but one lane. I couldn't imagine the cost of having all those big trucks sitting there for hours. Lucky for us, the northbound lanes were unimpeded. 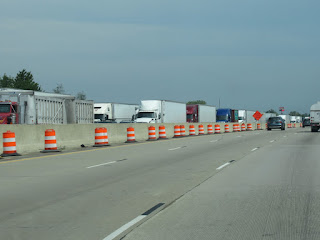 No one is going anywhere for a while 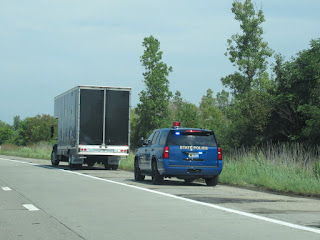 The Ambassador Bridge plaza had a somewhat unfinished appearance with marginal signage. They did have a huge gas bar adjacent to the Duty Free store but I just stopped to unlock the side door of the trailer just in case our border agent wanted to look inside. Then I paid the toll ($12 US or $16 Canadian compared to the $8 Canadian it charged my credit card going the other way) and we proceeded almost due SOUTH to Canada (Really) across busiest bridge, in terms of trade volume, in North America. 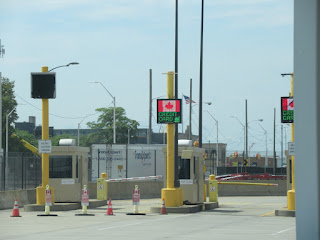 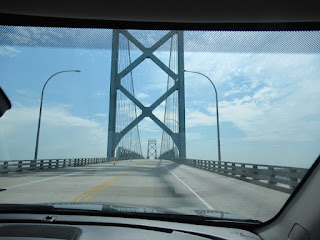 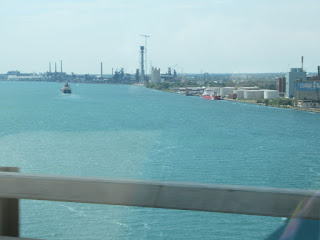 Before crossing, I made sure I had the ArriveCAN app open on my phone with the receipt visible, had a copy of the Email duplicate receipt the app had sent me and had a photo of our morning negative RAT tests. I honestly had no idea what to expect.

There was very little Canada bound traffic. There were several vehicles lined up in the NEXUS lane because, I guess, they either don't know that they can use a regular lane or the feel that because they went to the cost and effort to get the card, they were above using a regular lane. I pulled into an empty regular lane.

The agent was probably in his early thirties with close cropped hair, a well trimmed beard and tattoos peaking out from the cuffs of his shirt. I handed him our NEXUS cards and the conversation, which started normally, went like this:

Agent: Where do you live?

Agent: How long have you been gone?

Agent: What's in the trailer?

Me: A motorcycle and riding gear.

With that, we spent at least five minutes talking motorcycles and then he returned our cards and wished us a good day. No questions about purchases or vaccinations. I found out later that when he entered our NEXUS ID's, it would have brought up our vaccination status from the documents I uploaded. In any case, it was one of our better crossings.

The first thing we encountered when leaving the bridge plaza was a McDonald's. They had dual parking spaces and the "lobby" was open for business so we picked up lunch to go, locked the trailer back up and set out for home. As we drove down the street towards Highway 401, we saw truck after US bound truck lined up and, again, going nowhere. I have no idea what the holdup was but I can imagine there were a lot of unhappy drivers. 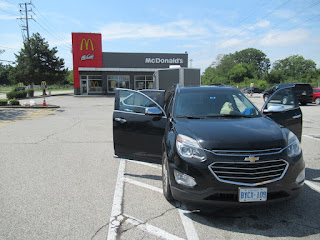 Mickey D for lunch to go 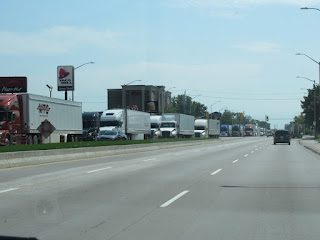 Miles of stopped US bound trucks

We were surprised at how many wind turbines there were visible from the 401 through Essex County. This article from two years ago says there were 170 turbines then and I can only imagine there were more today. 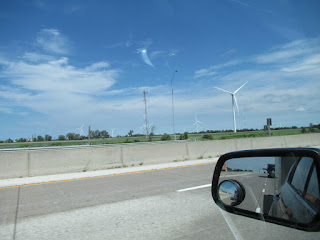 I fought fatigue all the way back. There was a short stop in Elgin County so I could get out and walk around and a coffee stop (OK, cold brew) at the Dutton On Route service centre. It looks like there will be major improvements to Highways 401 and 402 around London including upgrading interchanges at some major roads. This should disrupt local traffic for a while.

As we approached Waterloo Region, I planned  to take the King Street exit and follow Highway 8, 7 and 85 to get home. I was going to be careful getting off there because they had made some changes to the ramps. It did not matter because I blanked out and the next thing I knew we were approaching Hespeler Road, several miles further along. That was downright scary. We got off there, flipped around the other direction and caught Highway 8 on the way back.

After unloading the bike at the condo and parking it in the underground garage, we took the trailer over to Access Storage on Shirley Drive. Note to self: avoid Shirley Drive right after 5:30 because every business along that road seemed to get off at the same time and there are no traffic lights at either end. Cars were lined up a ways back. After we parked the trailer, the flash jam had vanished.

On the other end of Shirley Drive, Sandy saw something interesting so we stopped to take a look. The vehicles looked good from far but were far from good. Still, we had our own Cadillac Ranch right here in Kitchener. The first was technically a Lasalle but it was made by the Cadillac Division of GM. 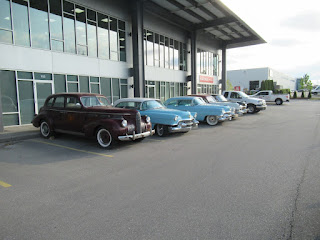 We stopped at the grocery store to pick up a couple of essential items (bigger shopping trip tomorrow) and then headed home. It took a few trips to get all our luggage up to the 15th floor (elevators are great) but it was all done before too long. The unit was nice and cool because I had engaged the AC from the app on my phone. The new Ecobee unit is great.

So our first trip out of the province/country in almost three years was over. It was great to see old friends again but the time just flew by. We are planning to head back out for the VROC Reunion in Eureka Springs, Arkansas on September 11th. In the meantime, the list of things to do is long. At least now this trip blog is finished. 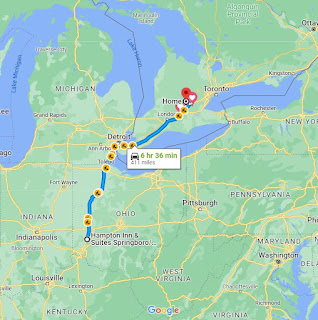