It was still dark when I pulled the Equinox and trailer down in front of the room and we loaded our overnight bags. It looked like it was going to be a good day to travel, especially important for those who would be riding home. We said goodbye to the early risers and hit the road about 6:30. Our destination today was Springboro, Ohio, where I had made a reservation last night at a Hampton Inn.

Our first stop was the McDonald's in Waynesville. Sure enough, a sign in the door said the "lobby" was temporarily closed but that we could visit them in their drive-thru. I don't like driving thru with a trailer. After seeing DQ, Wendy's and now Mickey D's with closed lobbies (ostensibly due to A/C problems or staffing shortages), I have come to suspect something else is going on. During the period when the indoor options were prohibited due to COVID, I think that these fast food operators discovered that their profit margins were higher if they did not have the expense of operating the counters, tables and restrooms inside. If I am right, expect to see these "temporary" measures become more common, just as phone service lines are now always experiencing "higher than expected wait times". In any case, this establishment did not get our business on this day.

Since we were in Waynesville, we took NC 209 up to I-40 and stopped at the Petro truck stop for fuel. I had noted Friday that the stations here were priced significantly lower than either Maggie Valley or Waynesville. This was the first time on this trip that I encountered the Zip Code Challenge while paying at the pump and it was the first time ever for our new Postal Code. (For those not in the know, take the three numbers in your Canadian postal code and add 00 for a five digit numeric value that will satisfy the pump.) We also went in and got coffee and food to go. I chose a Jimmy Dean breakfast sandwich and Sandy picked up some banana bread.

By 7:15, we were heading towards Knoxville on I-40 under lightening skies while listening to an audiobook rendering of Nicholas Sparks' The Return (borrowed online from the Sudbury Public Library). We crossed into Tennessee and, around the Gatlinburg exit, were passed by a pack of jeeps that looked like they had been off-roading. Jeeps were to become the theme of the day all the way to Ohio, augmented by some really muddy side-by-side ATV's on trailers. 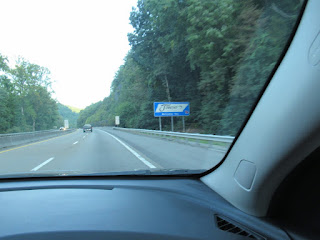 The Volunteer State on I-40

I-40 gave way to I-640 as we went north of Knoxville to connect with I-75 North. The day went by without much to note except that I started to feel waves of fatigue. We stopped at a gas station in Jacksboro, Tennessee so I could get a coffee, which I chased with a 5 Hour Energy bottle. 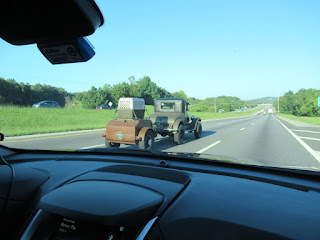 The things you see 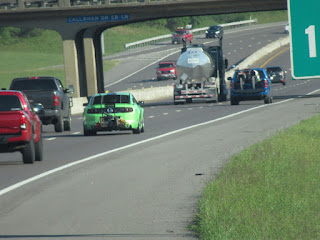 That is a lawn mower on the rack on the Mustang 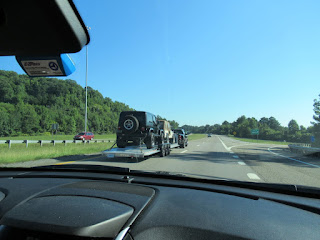 Many, many jeeps both driven and towed

We came down the Jellico Hill and crossed into Kentucky about 10 AM. The smell of scorched brakes in the truck parking section of the Welcome Center was quite noticeable. We used the restrooms and then I splurged for a data connection to tell my DVR at home to start recording the NASCAR race at Daytona, which had been postponed yesterday due to rain. I'll be able to watch it when we get home. 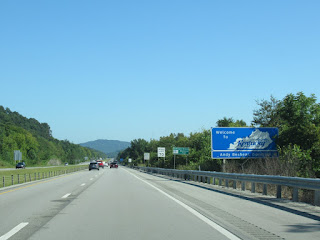 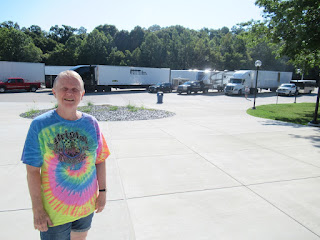 A touch of colour at the Welcome Center

We stopped at a Shell station for fuel and I added one liter of oil since it was looking a little low and a longer dipstick was not an option. It was 91F as we breezed by Richmond, Kentucky, home of the famous VROC Wolfman's Wandering Rally in 2009. Just before Florence, we stopped at a McDonald's that did have an open "lobby". I got a large iced coffee to try and perk me up again while Sandy got her favourite, a smoothie. People say they can see things in the clouds 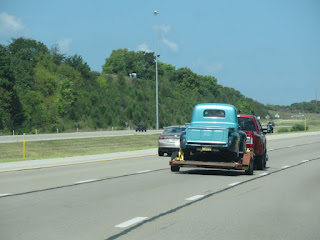 We passed through Florence, Kentucky (where we stayed on the way down) and started down the Covington Hill towards the Ohio River and the Ohio state line. There were dire signs about closed lanes and traffic backups but we didn't find much of a problem. 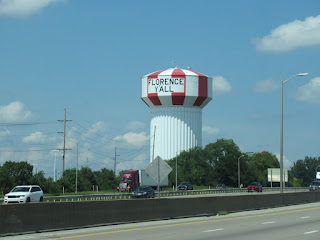 There is the famous water tower 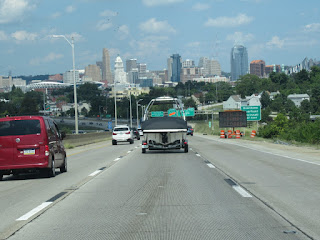 Covington Hill with Cincinnati ahead 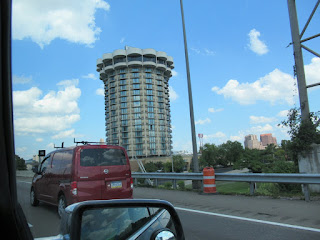 Used to be a Rodeway but now a Radisson 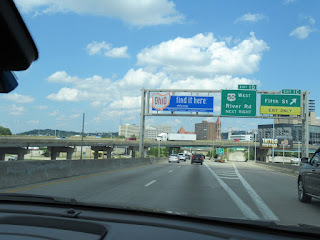 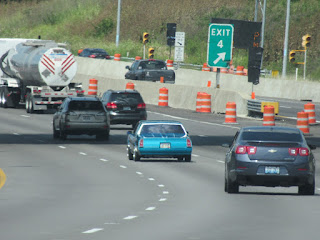 The drive through Cincinnati was uneventful and traffic eased up as we moved north. We arrived at the Hampton Inn at a relatively new crossroads adjacent to the Interstate in Springboro at 2:45 PM. I spent some time resting my eyes and then sorted some photos and worked on the blog for a while. 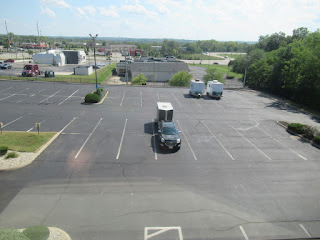 A quiet night at the Hampton Inn

There was a Bob Evans nearby so we walked over there about 5:00 PM for a bite to eat. Oddly, there was no sidewalk on the side street down there so we walked facing traffic. Luckily, there were push to cross buttons on the main road or we would have been roadkill. 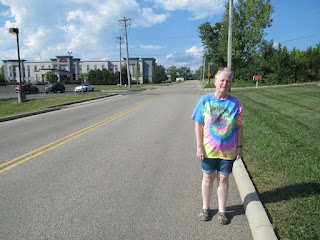 Not a sidewalk to be seen

At Bob Evans, a nice young lady named Sierra took our orders. We each had a half turkey/bacon sandwich with chicken noodle soup. After all the food I put away in the last week, it was time to start tapering off. We brought Sandy's sandwich back to the room and I nibbled on it a bit but we were both asleep before 8:00 PM. 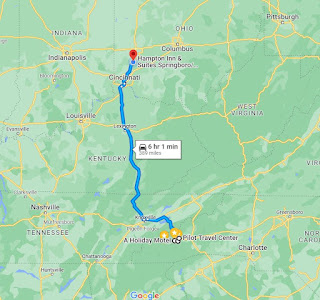