After a breakfast at the Unique Café, the group ride set out this morning for Galena Illinois, a small historical town just south of the border. It originally mined most of the world’s lead supply but now caters mostly to tourists. The group leader did a fine job and all sixty bikes arrived in Galena in style. The group broke up to explore town. 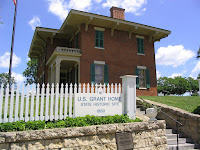 A few of us walked the main street, checked out the shops and had lunch before riding up to take a tour of the home of Ulysses S. Grant. The house, given to him after the Civil War, stood on a hill overlooking the town and held many of the original furnishings. He was in this house when he learned he had been elected President of the USA.

After the tour, I led a small group over to Dubuque Iowa and north along the Great River Road. We stopped in Balltown to enjoy an overlook Sandy and I discovered last year but skipped a visit to the oldest bar in Iowa. We went on to Prairie Du Chien for ice cream and then we returned to Boscobel via Highway 60, which runs along the north side of the Wisconsin River.

We spent another evening around the campfire on Fly hill.
Posted by Jim "Skid" Robinson on 6/17/2005