We’re getting better at packing up. It took a mere twenty minutes to get ready to go. We hooked up with Scotty and Marlene and run into town to meet UteMike and Brent, a Colorado rider who joined us.

I led the group north on 191 to I-70 and then west to Green River. The terrain was mostly a flat desert with some low canyon walls in the distance. After Green River, we continued on and turned south towards Hanksville. As we approached Hanksville, we passed red rock needles and buttes and then some badlands type of features with a palette of colours striping the eroded walls. We turned west at Hanksville heading for Capitol Reefs National Park and Torrey. 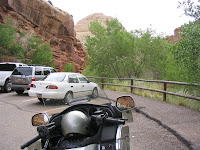 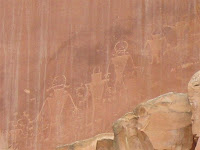 The road through Capitol Reefs winds through a narrow canyon. We stopped at one point to view the Capitol Dome, and again to view some petroglyphs or native pictures carved in the rock face (picture). At the visitor center, we took a scenic drive down through the park and back.

Heading west again, we reached Torrey and stopped for lunch. Dan from Salt Lake City joined our group and, after a quick bite, we headed south on Highway 12. This is a spectacular road. With the trailer, we dropped to the back of the line to let the others rock and roll. After a short run across the desert, we started up a mountain sweeping back and forth through curves lined with pine and aspen trees. As we got higher, the trees thinned out to high meadows and, at one point, a snow bank still hung on at the side of the road. We stopped several times to enjoy the scenic overlooks.

After a while, we left the trees and grasses and came to the place I had been dreading. The Hogback. This is a stretch of road several hundred yards long that has a series of curves. There is no shoulder to it and both sides drop steeply away from the edge of the pavement (look for link). Miss either side and you would have a fall of several hundred feet or more. It seems that Utah doesn’t use guardrails. This put my acrophobia to the test. Despite being almost paralyzed, I managed to get across it and join the rest of the crew on the other side. From there, the drop into Escalante Canyon continued to hang on the edge of cliffs without rails, but the drop was only on one side or the other.

Coming down to flat land, we again encountered, Brillo, Deb, Batman and Ace at a gas station. They headed out first and we followed shortly although we stopped once to don rain gear since it looked like we were heading into another afternoon rain. The weather immediately brightened up.

We bypassed Bryce Canyon National Park and turned south on US 89 towards Kanab. About 25 miles short of town, the wisdom of donning rain gear became apparent. The downpour was heavy and lightning was flashing across a dark sky. We pushed on and found our temporary home, the Parry Lodge, at the center of town. This place was apparently built so that TV and movie actors would have a place to stay while filming in the area. Shows as diverse as The Outlaw Josie Wales and Planet of the Apes were shot in the Kanab area.

The gathering was well underway, and the rest of the evening was taken up with greeting old friends and meeting new ones. This was why we came.

After midnight and an evening of rain, it was time to turn in for the night.
Posted by Jim "Skid" Robinson on 6/23/2005