Today all the Ontarians hooked up with a crew of Georgians and decided to see Mt. Zion National Park. It’s a short ride up Highway 89 to Mt. Carmel Junction where we turned on Highway 9 west towards the park. After a few miles of open road turning into a small red rock canyon, we came to the park gate. Our National Parks Pass got another workout and the sign said 11 miles to the Visitor’s Center.

After five miles or so of running through the red rock canyon, we came to a line of backed up traffic. A sign said there was a tunnel ahead and we could see a ranger stopping the traffic. After a while, a line of cars, RV’s and bikes came out of the tunnel towards us. When they had passed, we were allowed to go. Although the tunnel road is painted for two lanes, it twists and winds for over a mile through the mountain. When we came out the other side, we were perched high on the wall of a deep canyon and we descended through a series of switchbacks down to the floor where we followed the winding road to the Center.

This was the most spectacular National Park I have seen so far. The towering multi-coloured peaks surround the canyon and its offshoots. We checked out the Visitor Center and then caught a free tram, which took us up a side canyon along the North Virgin River where normal traffic was barred. The further we went, the better the scenery got. Some places, the only way to see the top of the canyon was through the open roof of the tram. The trams stopped at various places to let people on and off at hiking trails and viewpoints. 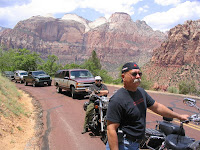 When we returned to the Visitor Center, we got back on the bikes and headed back to the switchbacks and up to the tunnel where we had a short wait. This gave me a chance to get a photo of Norm and Gary backed by some of the most spectacular scenery in North America. By the time we got to Highway 89, we turned south and started traversing the front of a very nasty storm system. We raced the storm back to Kanab and only got a little wet, although the winds were starting to get violent. We got safely back to the Parry without incident.
Posted by Jim "Skid" Robinson on 6/25/2005

It's true: Zion National Park is spectacular! The multi-colored canyon walls and peaks are gorgeous!