The words for today are Mormon and Cricket.

We waved goodbye to Bob, Barb and company as the GoldWings thundered westward out of Ely. Actually, Sherm had to honk his horn because the Wings under full throttle didn’t make enough noise to get them to look up.

There was that sign again. Highway 50. The Loneliest Highway In America. This part sure was. As a counterpoint, a steam engine running parallel to the road gave a jaunty toot of the whistle and wave as we went by. 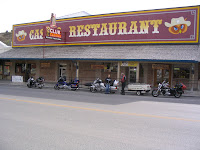 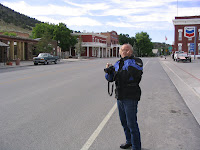 We ran for an hour or so until we reached Eureka where we stopped for a fine breakfast at the Owl Club Casino & Restaurant. While there I was able to get a picture of Sherm, the elusive blogmeister, at work. Before we were done, Barb, Bob, Las and Terry arrived. We were, in fact, being followed. This place wasn’t so lonely after all.

We left first again, roaring silently up the hill headed for Austin. Things were going well until we reached the turnoff to Tonopah. I saw black spots running across the road and realized we had come to the leading edge of the Mormon Cricket invasion Sherm had described on his outbound trip. As we continued, they got thicker and the dead crickets on the road started to become a layer. In addition to traction issues, smashed crickets have a very pungent odour to them. This continued, off and on, as we went up over the summit and down into the small and very antiquated town of Austin. We stopped and walked around checking out the old buildings and discussing crickets with locals and tourists alike. There was also a family from Colorado who had just lost their windshield to a deer. Last word was that highway crews were using snowplows to the west to clear squashed crickets off the road.

With fear and a little loathing we headed west looking for more crickets. We passed a rank smelling eastbound snowplow. Soon we came to a sign saying “Slippery Road Next 8 Miles”. And it was. The road was covered several crickets deep and all I could think as they crunched under the tires was “Rice Crispies”. Eventually the crickets thinned out and we got back on good old pavement again. Parts of the bikes and trailers will need a pressure wash soon. 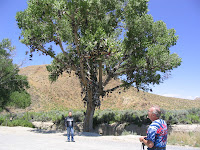 The next thing we came to in this land of wonderment was the Shoe Tree. I don’t know what possesses people to throw their shoes up in this otherwise ordinary tree, but it certainly is a must see if you travel this way. I looked for snakes in the gully it grows in but I am still 0 for 978 in my serpent search. Before we left, Barb and Bob roared by and Terry and Las pulled in.

We followed T&L across a dry lakebed towards Fallon. We saw several pairs of jet fighers rolling in and making practice runs on the Navy range south of town. When we stopped for gas, Barb and Bob (who had stopped to see petroglyphs) caught up to us again. They rolled on ahead towards Carson City while we took the road leading to I-80 and Reno.

The Reno traffic was a little hectic as we found our way to the Atlantis Casino. Finding a place to park while we checked in was a little tricky as was finding a parking place for the night which would accommodate the bikes and trailers. We got her done, showered and then wandered over to the Casino. Sherm and Steve each parlayed a 50 cent contribution to the slots into a $2.50 fortune before we quit while ahead and went to Toucan Charlie’s Buffet and Grill for dinner. After the buffet, I was considering looking for a maternity shop to find some pants that would fit.

We’re taking a break right now but will be heading downtown after dark to see all the lights.
Posted by Jim "Skid" Robinson on 6/27/2005