The winds had abated this morning and it dawned nice and clear. We broke camp and were on the road shortly after 6:00 AM headed for Denver on I-70. After breakfast and fuel on the west side of Denver, we started up.

I’ve never run west of Denver on I-70 before. This has been my loss because it is a beautiful road. The climb out of the city is steep and seems to go on forever. As you get way up it suddenly occurs that some of these people must have mountain goat blood since there are houses, very luxurious looking ones, built way up the mountainside.

We stopped at a visitor center at Livingston and checked out things to do there for a future trip. Continuing on, we marveled at the mountains and the towns down in the canyon. We also passed UNDER the Continental Divide through the Eisenhower Tunnel. Through Vail, you could almost smell the money. 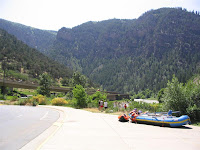 After leaving Vail, the canyon widened into a very dry desert valley as quickly as if someone had thrown a switch. This continued until we reached Glenwood Canyon. I’ve never seen an elevated Interstate Highway, double-decker in some places, built through a canyon before. The canyon ended at Glenwood Springs and we were back into arid valley again. 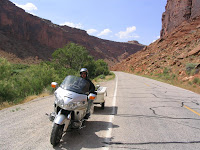 After a quick lunch stop in Grand Junction, we crossed into Utah and started down Highway 128, the Scenic Byway that was also the shortcut to Moab. It was a bit daunting since it twisted and wound its way across barren terrain. That was until we got to the Colorado River. Then the road wound along the river through one of the most spectacular red rock canyons I have ever seen.

At the end of the canyon we reached Moab so we hunted down the KOA on the south side of town. My temperature readout on the bike was 40C, which is about 104F. When we pulled in to the KOA, two red Vulcans belonging to Scotty and Marlene, VROC friends from Adrian Michigan, were parked in front of the office. Before we registered, Toby and Slammer were shouting at us as well. It was like old home week. I parked the bike and trailer in front of our campsite and took a moment to have a cold Pepsi Slammer offered. While enjoying the cold drink, I saw an RV try to make the turn around where the bike was parked. He didn’t hit the trailer hard, just took a small chunk out of the gel coat. This will be a reminder to me not to leave the trailer where inexperienced drivers can hit it.

We set up and then headed out to look for food. If you are ever in Moab, I can recommend the Stagecoach Grill. I had an excellent chicken fried steak and Sandy had fried chicken.

Fed, we adjourned back to camp where storm was just approaching. Last year in Moab it rained on us. It hardly ever rains in Moab but here it was again. Gusting winds added to the effect. After visiting with a couple from Custer SD on a Harley trike, we called it a night and went to sleep to the sound of the wind gusts beating on the camper.
Posted by Jim "Skid" Robinson on 6/21/2005