We packed the gear, connected the trailer and joined Sherm and Steve for breakfast in the lodge. There were a few people about getting ready to leave, while others were already on the road or still asleep. After checking out and getting fuel, we headed north up Highway 89. 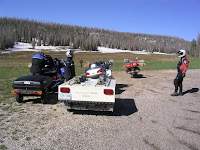 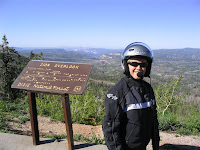 A ways up, we turned west onto Highway 14 towards Cedar City. This was a great road. In just over 40 miles of twists, we got to see cedar and aspen stands, lava flows, snow, high meadow, Zion from a distance, steep canyons and red rock cliffs. This is definitely a must see road if you are ever in the area. It was cool up top and some people donned extra gear.

In Cedar City, the terrain flattened and the temperatures climbed so the extra gear cam off. We set out across some very empty terrain on Highway 310 North. About 50 miles up the road, we came to Milford Utah and stopped for gas. For a little town in the middle of nowhere, Milford is very nice. As we turned NW, we found Penny’s Diner at the end of town. This was a surprisingly nice place withy a 50’s theme, good food and reasonable prices. And WiFi. Sherm hooked up and posed some pictures to his new blog. BTW, if you want to see more photos of this part of the trip, you can see his new blog at http://kanabtocoosbay.blogspot.com. Just before we left, the power went out and he missed his last post. We also had trouble paying since the cash register wouldn’t work. 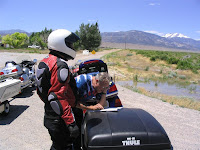 From Milford, we continued NW, crossing the Nevada line and picking up another hour. North of Baker, we turned west on Highway 50, billed as The Loneliest Highway In The World. The terrain was varied, with rolling dry valleys, low mountains and larger snow covered peaks in the background. Sherm and Steve pored over the map. I'm not sure why because there was only one road. We saw very few vehicles along here.

After a while, we arrived in Ely Nevada. This little place looks like it has seen better days. We had reservations at the “historic” Hotel Nevada and Casino in downtown metropolitan Ely. This six-story high rise dominates downtown and was the first fireproof building in Nevada when it was constructed in 1929. It’s seen better days but we’re comfortable. After checking in, we walked around town looking for ice cream. Since almost everything closes on Sunday here, we ended up back in the casino restaurant.

After the snack, we went up to check out our rooms, which had been made up in the meantime. It was a surprise when a door across the hall opened and Bob and Barb, VROCers from Carson City we had said goodbye to in Kanab, popped their heads out. Small worlds continue. We moved our gear from the bikes up to the 4th floor rooms and then went down to the bar for our complimentary margaritas. Then it was back to the room to figure out which dial-up connection to use to get on-line.

About suppertime, Terry and Las (friends of Bob and Barb) arrived after an extended tour of Zion. We settled in the casino restaurant and had some pretty good meals. Somehow, Terry ordered prime rib even though it wasn’t on the menu. We made fun of him because he didn’t know the price but when the bill came, the slab of meat cost him less that $9.00.

Now we’re sitting around the rooms and relaxing in anticipation of another day on The World’s Loneliest Highway. Tomorrow we are booked into a flashy hotel/casino in Reno.

BTW, there are two Honda GoldWings parked in the lot, both bearing the licence plate VROC. One is from Oregon and the other Ontario. I’m waiting for someone to ask the question so I can tell them it is the mark of a Kawasaki Vulcan club:-)
Posted by Jim "Skid" Robinson on 6/26/2005