At the last meeting, the Freedom Riders membership agreed to join Action Sudbury. This worthwhile organization, started by Peter Wong and currently headed by Ron Roy, has been promoting safe and sober driving for 25 years. The Freedom Riders feel that drunk drivers are a threat to people on the road and that motorcyclists are proportionately more at risk of injury and death than car drivers.

We were notified that there would be a press conference with Rick Bartolucci, Sudbury MPP and Ontario Minister of Public Safety & Correctional Services at Dynamic Earth this morning. Various speakers would introduce a campaign to promote sober ATV operation, various awards would be given out and everyone would smile for the cameras. Action Sudbury would have a booth set up.

The police presence was more than I expected. The OPP SAVE team had a tow vehicle, trailer and two ATV's. OPP and GSPS had motorcycles. GSPS had a boat. Even Honda had a traveling display. Uniforms were everywhere. 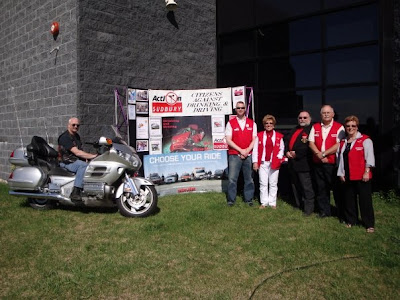 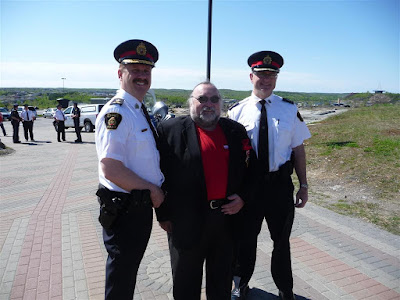 Normie, flanked by new Greater Sudbury Police Chief Elsner and Deputy Chief Lekun
It all went as planned. After the press conference, most of us had hot dogs or sausages on a bun BBQ-ed right there for us. Then we tore down the display and headed back to our previously scheduled day.

I have been involved in community programs aimed at interdicting impaired drivers since 1992 and can't stress how much I believe that it is important that each of us ensure that we are not impaired by alcohol, drugs or fatigue when we take control of a vehicle.