Another Day Around Combermere

Well rested, Sandy and I woke up about 6:00 AM. We relaxed and I read more Uris until the rest of the family arrived a little after 8:00. Breakfast consisted of two packages of bacon, 16 scrambled eggs and most of a loaf of whole wheat bread.

It was quite cold outside but there was no sign of the forecast flurries, even though there was a stiff breeze blowing through the tall trees. The phone browser told me it was 3C in Bancroft but felt like -1.

After breakfast, Kim, Mike and Jolene made the circuit of the cabins to say their goodbyes. Mike wanted to beat tomorrow's Toronto-bound traffic and get out a day early. They hit the road a little after 11:00.

Heather, Tom, Sandy and I decided to go for a ride. I plotted out old traditional route through Palmer Rapids, Quadeville and Foymount before swinging back to the Wilno Tavern for lunch. Palmer rapids was celebrating Palmerfest. I'm not sure what was involved but there were a lot of cars with kayaks and canoes. These are tough folk because I'm sure the water temperature was quite cold. Funny, I had forgotten that Plamer Rapids implied that there would be some fast moving water somewhere.

In Quadeville, I elected to scrub the long route and take the direct way to Wilno. Some of the road was OK but I'm sure that part of it was three miles of used pavement they stretched to cover 15. Some of it was almost as bad as Sudbury streets. Tom hit one pothole that really jarred him and he wasn't too happy about it when we arrived at the tavern.

Wilno was the first Polish settlement in Canada. The tavern serves perogies, cabbage rolls, Polish sausage and sauerkraut and other ethnic food and, today, they had the buffet. Heather, Tom and Sandy ordered a la carte, but I made two trips to the buffet table. I probably shouldn't have, but it was good. 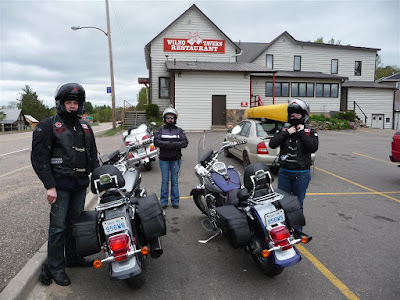 After thanking Tom for treating us to lunch, we went outside where Tom's bike refused to start. In fact, it refused to do anything. I figured it had to be either a battery terminal or a fuse. They were both under the front seat, so we pulled it off and I found a loose negative terminal. After a bit of tightening, he was back in business.

We rode along Hwy 60 to Barry's Bay, following one very slow driver the last part of the way. If I were a cop, I would have pulled him over to check his sobriety. In the Bay, we stopped at the train station/tourism pace to get a photo of the water tower. Heather and Tom have been collecting photos of themselves in front of water towers wherever they go. 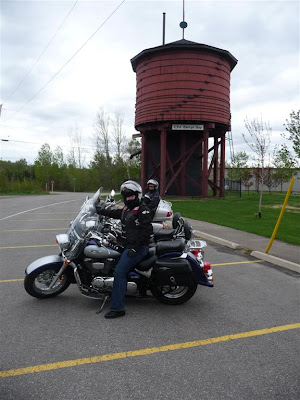 We fueled up so we'd have full tanks starting out for home tomorrow. Then it was back to the Lodge where we were just in time for the challenge judging and ice cream feast. We didn't do well in the challenge because we didn't try some of the more difficult tasks.

John asked if I would be lighting the dock fireworks tonight and I said sure. That's been my post for years. He said he'd detail Matt to assist after he had done such a fine job last year. Brian had already done the beach prep work and gotten a lot of the fuses ready, something we left until the last minute a year ago. We also considered that we would be able to light at a more leisurely pace since it won't be pouring rain this time. There was a moment of hope that we wouldn't have a premature explosion like one of my smaller mortars last year or an errant candle like the one that hit Brian. The uncertainty provides a lot of the fun. 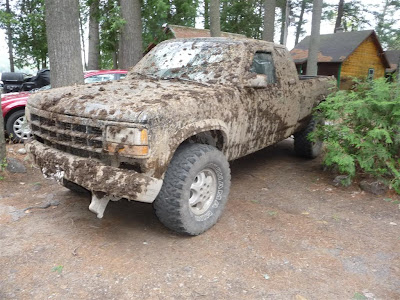 Mud bogging is a popular pastime in the Madawaska Valley
The four of us sat down to a supper of fireside pie (a concoction of meat, potatoes and carrots), Caesar salad and Kim's homemade bread. This was topped off with chocolate pudding.

The forecast for tomorrow has changed. They now say it will be going down to -4C overnight, but tomorrow should be sunny and warm up fairly quickly.

After supper, I had some quiet time to read before it was fireworks time.
Posted by Jim "Skid" Robinson on 5/17/2009