Heather headed to the chiropractor this morning. When she came back, she told us that police had closed an area around Weber and Northfield due to an ammonia leak at a plant. Traffic was badly tied up and that was the way we had planned to leave town.

The forecast said it was +4 and would be heading to +18. The call was for sunny until evening. Someone on the radio said the song was "Dirty Deeds Done Dirt Cheap", not "Dirty Deeds Done With Sheep". I immediately though of my VROC friends in new Zealand.

Tom drove his car over to his parents where they loaded their bikes. I skipped the first part of the route I had loaded in the GPS and went out through St. Jacobs to avoid the road closures. We ran the usual route up through Fergus and Orangeville to get to the Hockley Valley.

Tom had told me they needed gas after 100 kms. Once again, we were reminded of the downside of GPS use when I selected a Petrocan station in Beeton as the stop. All we found when we got there was an empty corner where the station used to be and a sign saying a new one was coming soon. We managed to make it to Pete's Donuts at the corner of Highway 27, where we had breakfast in addition to getting fuel.

I have never run up Highway 27 to Barrie. It is parallel to Highway 400, which I do all the time, but has places I never heard of. Like the little town of Newton Robinson. In Barrie, we travelled 400 for a short way and saw a traffic accident being attended by an OPP S/Sgt in his white shirt. I guess he was first on the scene, but I've never seen anyone that senior handling a minor collision. Of course, traffic all had to slow down to see what was going on.

We took 11 to Orillia and then went pretty much directly to Combermere via Monck Road, Highway 503, Highway 118 and Highway 28. The traffic wasn't to bad and, while rough in some spots, the pavement was passable. 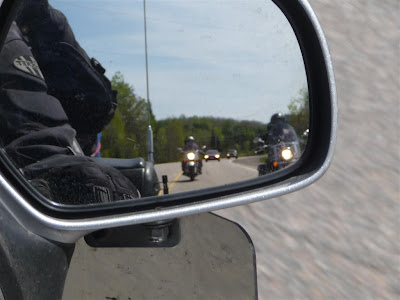 Unfortunately, in one stretch with nowhere to pass, we got behind someone who thought the speed limit, or slightly below, was a reasonable speed. 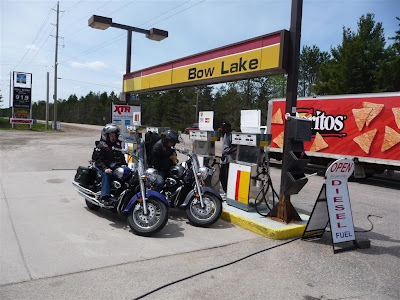 We stopped for gas at Bow Lake. I called Kim but got voicemail. After we got rolling again, she called back. The hands free cell on the bike is a nice feature. Turns out they were about 20 minutes behind us on the same highway. After getting through a very busy Bancroft, we arrived at Stevenson's Lodge. 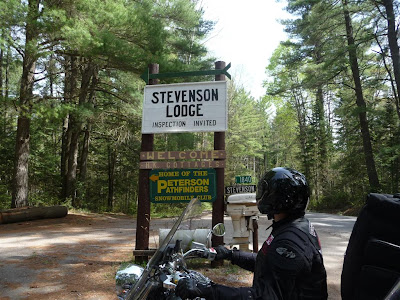 Sandy, Heather and Tom went to find Rob and see about the cabin arrangements. They did some dickering and we did some switching around. About then, Mike, Kim and a smiling Jolene arrived. 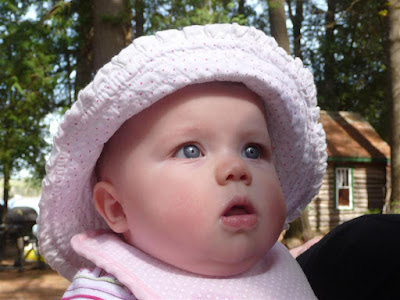 Tom, Heather and Sandy took Mike's van to Barry's Bay for groceries for the six of us. Because the van only had seating for three, I took the bike. We were careful not to buy too much. After returning to the lodge, we had a feed of chili and hot dogs in the main kitchen as people continued to roll in. The SEVROC people in Maggie Valley had a webcam going courtesy of Russ. The lodge had a router so I was able to check out what was happening down there. Then we were outside talking with some folks when strange things started to happen. 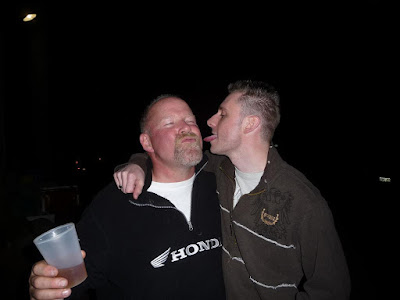 I'm not sure if Justin is washing Ken's face, or what, but the picture was too good to pass up
Then we adjourned to the Round House. This is the large octagonal building with the fireplace in the centre where we hang out most evenings. This wasn't our usual Round House. I'm not sure where all the young folk came from, but the place was hopping. 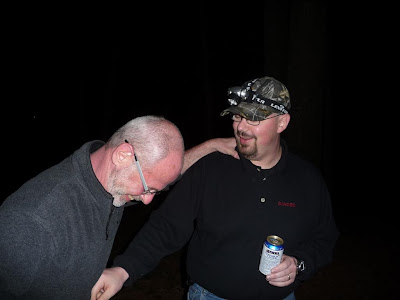 Old friend Eric and son-in-law Mike share a moment at the Round House
A few of us watched the antics until, about 1:00 AM, the last of the "old" folks decided it was time to head for bed. The forecast of rain tomorrow and flurries Sunday morning was weighing on us as we turned in.