Once again, the time for our annual Victoria Day trek to Combermere, Ontario is upon us. This will be the 21st year. And, once again, we will miss SEVROC in Maggie Valley NC because it is on the same weekend. I need to work on being in two places at the same time. We will ride to Waterloo today and then over to Combermere tomorrow with Heather and Tom. Monday, we'll all go back to Waterloo, and Sandy and I will return to Sudbury on Tuesday.

This morning, it was raining quite hard with strong gusting winds. We weren't in any rush so we watched the season finale of Lost (it ended with a bang) and Ice Road Truckers. Then I went out and picked up some cash and lawnmower gas. Bike tires were checked and we packed the gear. By noon, the rain was gone and I loaded the bike. The bags seemed light, leading us to wonder what we had forgotten. Probably nothing, we are just master packers. By 12:30, we were on the road.

By 12:40, we were on the southeast by-pass and fast moving clouds out of nowhere were raining on us. It only lasted five minutes, but the spitting on and off was consistent until Parry Sound. The one constant was a brutal wind out of the southwest. It pulled and tore at us steadily. One small trunk pocket opened up and Sandy's fuzzy Freedom Riders neck warmer left for parts unknown. The temperature started at 17, dropped to 12 and recovered to 14 over the first hundred miles.

We stopped for lunch at McDonald's in Parry Sound. Further south, the winds got even harsher, especially once we got south of Barrie and there was nothing to break the wind. At Highway 89, we left the 400, fueling at Cookstown. Proceeding to Alliston, the Honda plant must have just changed shifts because the oncoming traffic was steady. It made me think that, with all the woes of the Big Three, Honda was still going great guns.

We arrived in Waterloo at the advertised 6:00 PM. Heather and Tom were coaching their soccer team in a field beside Northfield Drive. We stopped there and then went over to the nearby Daily Grill where the Waterloo Wings were having their weekly supper. We had coffee with them and, I'm sorry to say, I won their 50/50 draw. Then we talked bikes outside until Heather and Tom arrived, having won their game. 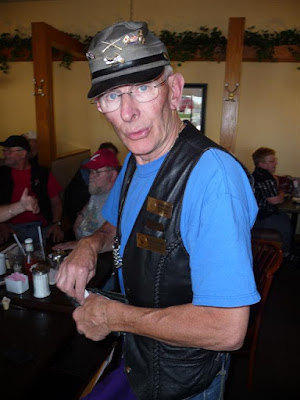 The four of us stayed at the Daily Grill for supper. Then we went back to the condo where we watched the two hour season finale of Grey's Anatomy. All our shows are ending, so we'll have lots more time on our hands after next week.

Sandy talked to Kim. Mike will pick up fireworks for all of us tomorrow before they leave town.
Posted by Jim "Skid" Robinson on 5/14/2009