Before we left Tom & Heather's for Combermere, I had lost one of the chains that hold my vest closed. Tom loaned me one of his three for the weekend. When we got back, I checked the restaurant where we had supper and along the road looking for it, but no luck. Just before we left this morning, Heather found it on the kitchen chair I had been sitting on, hidden under a jacket. So, just so I wouldn't have everything together, I forgot my Support Our Troops cap on their table.

We left as Heather was heading out to work. It was clear and 8C, but The Weather Network was calling for rain between Parry Sound and Sudbury.

The trip to Barrie was uneventful except for an OPP convoy we encountered after leaving the Hockley Valley in Loretto. A van coming south on 50 Road turned east on 1, followed by several police cars and SUV's. It pulled onto the shoulder and one cruiser blocked the road as several others arrived. Then they headed east again. 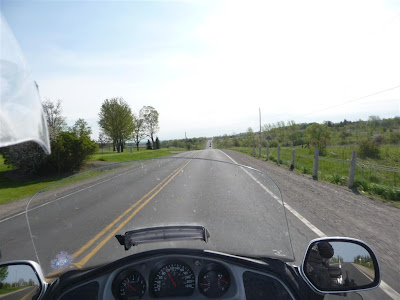 It's hard to make out, but all the vehicles ahead of us are police units
We wondered if the lead van was part of the convoy or, because it was unmarked, was being followed in anticipation of a takedown. It must have had some serious cargo because the whole group pulled into the OPP detachment at Beeton, where a TRU Team member was standing outside waiting.

We stopped at the service centre in Barrie for breakfast at McDonalds and fuel. We barely beat a busload of schoolkids to the counter. Although the sky was still clear and the temperature was up to 18C, I checked the radar on my new cell phone browser and saw we wouldn't get away unscathed. On went the rain suits. We looked a little funny all dressed up under the still blue skies but, thanks to technology, we knew we were doing the right thing.

Riding north on 400 through Barrie, we came upon an unmarked OPP car following a police officer riding an OPP Harley. I'm not sure what the deal was, but the motor officer was not the most competent rider I have seen. They got off at Bayfield.

On the by-pass, we saw OPP and ambulance. Two pickup trucks were in the ditch on their sides facing different directions. I'm not sure if they were a head-on or a side swipe, but it looked serious.

At home, we settled in and watched the Survivor Finale recorded on Sunday night. Luckily, we had avoided accidentally finding out the results for a whole two days and were able to be surprised as if we were watching it live.