The Sunday night fireworks display has been a mainstay of the Combermere weekend for all 21 years. Some of the fireworks are purchased by the committee with the money collected from the participants while the rest are brought by individuals.

About 9:00 PM, I headed down to the dock. This was a well planned campaign this year thanks to Brian, the lodge proprietor. 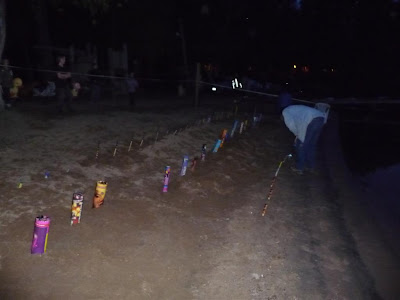 Fireworks technology has come a long way in the last couple of years. The dock fireworks used to consist of mortars on solid bases and we would launch 50 of them or so. Last year, the multi-shot boxes appeared. This year, we only had about 6 mortars, but there were lots of the big boxes. 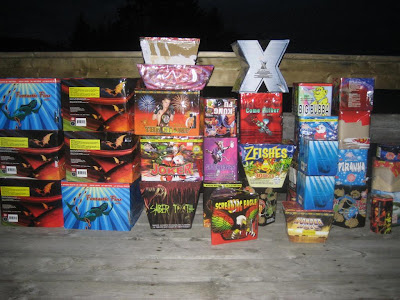 The six stacked on the left contain 160 choreographed shots each and even the smallest are over 20. This makes for a much more exciting show as the sequences can by quite spectacular. It also makes for less fuses to light, but is more dangerous working around them to keep a steady show going. 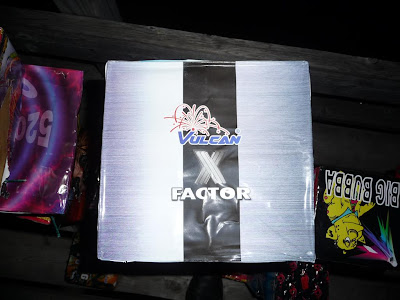 We even had some Vulcan fireworks 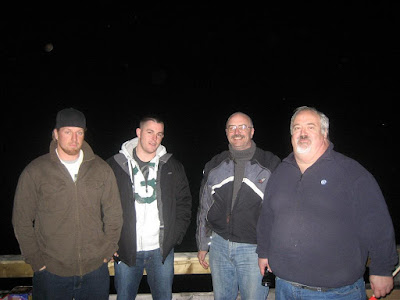 Your launching crew, Andrew, Matt, Yours Truly and Marc
Marc started on the beach with little guys that basically created coloured showers. He moved on to Roman candles and then to some that put on some sequenced shots. He held off before the three largest tube devices while Matt and I shot the mortars. Then, as he set off the last big three on the beach, Matt and I fired the flare and got ready to go. 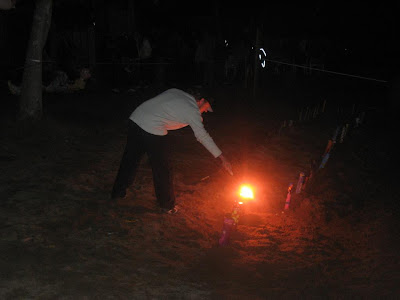 Andrew lighting the last big ones on the beach
Matt chose the order for ours and set them up with the fuses facing consistently towards me. I lit. There was a steady show and, as we neared the end, we lit a set of three at once and then another for the finale. 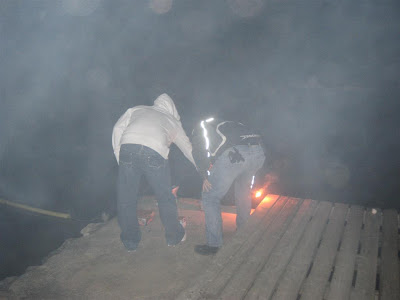 Matt and I lighting some boxes in a cloud of smoke 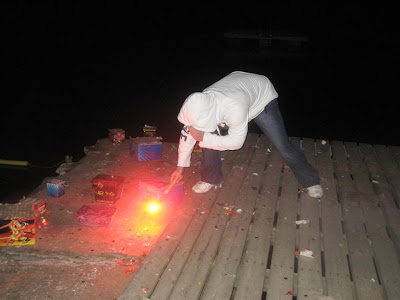 Matt lights the grand finale
The whole show took about 45 minutes and, from where I stood, looked like one of the best we had done. The only near mishap came when one of our smaller box charges tipped over after the first shots. Luckily, it righted itself when the next charges went off. We were also showered with debris as the tops blew off the packages. Some of it was burning. Fun times were had by all.

After our finale, they handed out sparklers to the kids and most people adjourned to the Round House for the last night gathering. Unlike the Friday night young people's bash, this was mellow and subdued. People eventually drifted off and Brother Rob and I, with Katy, were the last to leave at the stroke of midnight.
Posted by Jim "Skid" Robinson on 5/17/2009