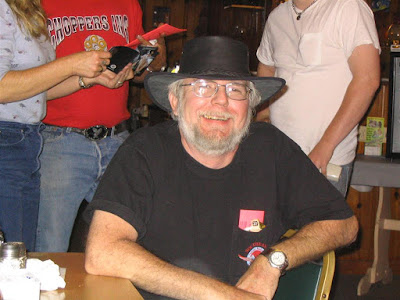 After we got to Heather and Tom's, Sandy was checking Facebook and saw a very sad post by Roxy. It seems our good friend Phil "Gunslinger" Thompson of Martinsville Virginia died today in a motorcycle crash. We met Phil at our very first VROC rally in Suches Georgia back in 1999.
Phil was a truck driver and a staunch libertarian. Several years ago, he reconnected with Lynn, a lady he knew back in school, and they got married. This past year, he fought throat cancer and it looked like he had won. Now he's gone, courtesy of a pick-up truck driver who "didn't see him", and the world is a lonelier place for those of us who knew him.
Our deepest condolences to Lynn and Brandy.
I went through my photo albums for some pictures of Phil. Some are mine, some I took from people's posts over the years, if anyone wants to check them out.
Here are some random thoughts I posted on the VROC newsgroup.
I was surprised that I don't have any recent ones and it occurred to
me how long it has been since I have seen Phil. But I have always
considered him a kindred spirit.
I was in that crowd Joker spoke of at Suches. Phil had the first of
the modern folding camp chairs and, with a high back, it dwarfed him.
All I could see was the hand come out, take the bottle of JD, tip it
and pass it on.
I remember the black Peterbilt climbing Wilkerson's Pass in Colorado
on the way to V2K and how he convinced the fairground security that
the Pete tractor was an RV so he could park it on site. I remember
the two of us riding back from Durango to Ignacio after dark slowly
with all the lights on high to avoid the deer.
I remember sitting up one night at Lake Lure after even Scott and
Margo had gone to bed, sharing a bottle and talking about all kinds of
important things, most of which we forgot before morning. Rest
assured it was all stuff good libertarians would approve of.
I remember early ES mornings when Phil, Uncle Lyle and I would sit
around the back of the IHS office drinking coffee and swapping tales.
I remember the blue/black/purple/pink paint job.
I remember him telling me how he met Lynn again and how happy he was.
I was happy for him, too.
Unfortunately, I also remember going through Martinsville last summer
and thinking I should call Phil. But we were on a deadline and there
would always be tomorrow, right? I was wrong and now he's gone and
I'm really sorry.
Rest in Peace, Phil. The world is a lonelier place without you and
I'm going to miss you a whole lot.
Posted by Jim "Skid" Robinson on 10/09/2009