I hope everyone had a great (Canadian) Thanksgiving.

We woke up this morning to -4C in Waterloo.  This was odd because TWN said it was only 0C in Sudbury.  Not often that it is warmer back home than down here.

We left Tom & Heather's and dropped a gift from Heather to Tom off at Kim & Mike's for hiding before heading home.  We left there about 10:45.  I took the Canamera Parkway and Wellington 32, but cut south of Guelph on Laird, Downey and Stone Roads.  This looks like it will be a great way to avoid Guelph traffic as long as the traffic lights on Stone Road don't back up.

Up on Highway 9, we took a drive through the Tecumseth Pines adult lifestyle (retirement) community.  I believe friends of ours will be moving here shortly.  I've always looked at the neighborhood from Highway 9 and thought it would be a nice place to live.  Seeing it up close hasn't changed that opinion.

We followed Highway 9 to 400 North without incident.  Northbound, I was reminded why I'm glad I live in the north as three lanes of southbound traffic ground to a halt around Highway 89. 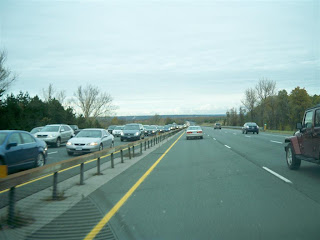 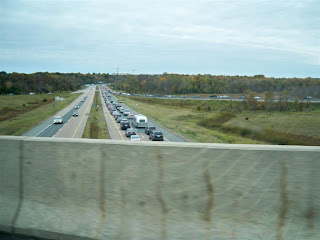 As we continued to roll north without much traffic, we started to get into the coloured trees.  The best were between the Musquash and Moon Rivers. 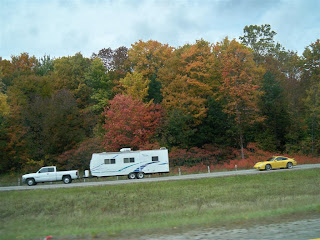 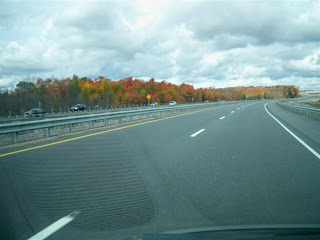 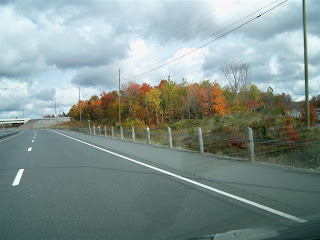 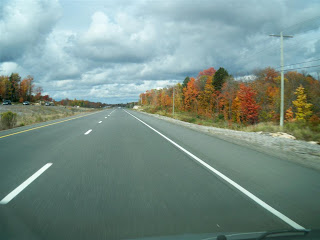 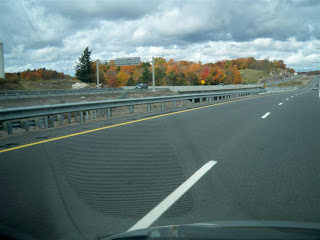 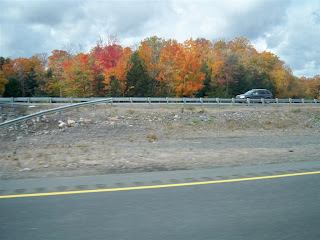 It started to get cloudy north of Waubaushene and spitting rain around Parry Sound.  Had a nice hands-free cell call from Thrillseeker as drove along.  She was looking for Guns phone number.  Traffic got heavier and slower on the northbound side.  We were jammed up at the speed limit except in the passing lanes when everyone, including the slowpokes, floored it.  The jam worked to our advantage north of the Key River when we came over a rise and found an OPP laser unit staring at us.  Due to flashed warnings and backed up traffic, we were doing 30 KPH LESS than the speed limit at that point.  One of the slow movers I got behind was a light brown Honda CRV doing 55 MPH but it had Ontario plates so it couldn't have been Slammer.

They closed all the passing lanes from Estaire to Sudbury.  Wiped them out and painted new fog lines.  I'm sure MTO decided these would no longer be needed when the new four lane Highway 69 opens down to Estaire, supposedly this fall.  It would have been nice, though, if they had waited until the new highway was open before closing the lanes on the old one.  It would be nice, once in a while, to have access to those who make these decision so I could ask the perennial WTF? 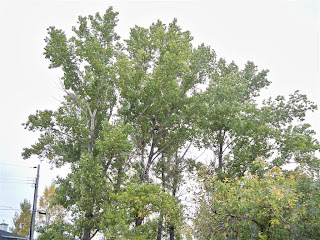 Back home, I note that the huge poplars in the back yard two doors down haven't even started to change colour.  This is typical.  They wait until all the other leaves have been raked up and the weather is really nasty before covering our yards with their many more leaves.  I hate those trees.  So does the neighbor but he doesn't have the considerable scratch right now to get them taken down.

We'll be heading south for the wedding a week from Thursday.
Posted by Jim "Skid" Robinson on 10/19/2009