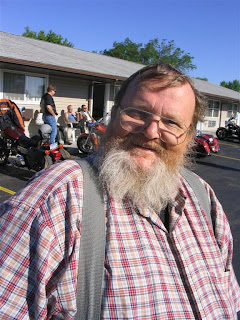 We received word today that one of the kindest, gentlest and most knowledgeable VROCers it has been my privilege to meet passed away in his sleep Tuesday night in Sparks, Nevada.  Chunk Keisling, who hailed from Jefferson, Wisconsin, was on his winter pilgrimage to pan for gold in the warmer climates.

I think Sandy and I met Chunk about 2001.  I know it was at Eureka Springs, Arkansas because he was giving away FGGB buttons.  That stood for Fat Guy Grey Beard and there were a lot of takers. Chunk was a master of many things including photography, painting, lapidary, gold prospecting, baritone horn playing and nuclear physics.  After Fred's passing, he aided Mo at Kickstand Lodge for a long time and was a fine chef as well.

Chunk attended very many VROC gatherings.  He was one of the smaller contingent who could be counted on to pop up almost everywhere, sometimes on the red Kawasaki Concourse that used to belong to Foggy (RIP) and other times with his 800 Vulcan in the back of his truck.  He towed a Time Out camper trailer behind the Connie and we would often compete with him for the most level spot to set up.

We last saw Chunk in August at the Interlochen gathering.  He and I sat out the  last night away from the fire and watched the Perseid meteor shower.  It occurred to me that this was also how I had spent the last night with Snake.  He was in his usual form, dispensing the wry Wisconsin with with great effect.  It's funny, I never knew his name was Ronald until I saw the obituary.

I loaded a few pictures I took of Chunk over the years here.

Rest In Peace, old friend.  We are sure going to miss you.