Oddly, I was up again and in the exercise room at 6:00 AM for an hour of cardio.  It is not nearly as much fun when there are no TV's or other people to watch.  Then it was time to start getting ready for the BIG DAY!

Yesterday's rain had stopped but there was still a strong wind blowing.  The only difference was that today it was coming from the south and didn't bite nearly as much.  Mike picked up the girls to take them to get their hair done, while I checked the tire pressures in Heather's Grand Am after she hit the curb yesterday. 10, 12, 12, 18.  I was sure I had given her a tire gauge and showed her how to use it.  Off to the gas station for some air since I didn't want to over-tax the little air compressor I carry.  Then I checked the van and found them all at 25 PSI compared to the spec 36.  It looks like the new Goodyear Comfort Tread Kevlar tires were set at this pressure when I got them, which explained the smooth ride.  I took it over and upped the pressure to 36.  Now it is riding like a truck.


In the meantime, the ladies were having fun with hair and make-up. 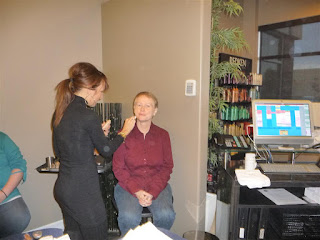 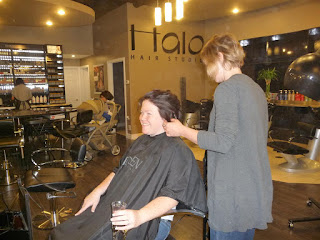 Heather in the chair 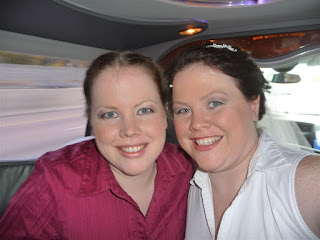 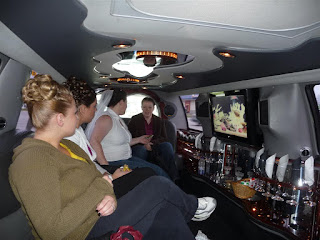 The limo ride back

While they were away, I had several father-of-the-bride tasks.  The first was to get the flowers when they arrived and ensure they were moved to Heather's suite.  No problem.  Then I was to go over to Zehr's and pick up prepared sandwich and fruit trays so the bridal party could nibble while they were getting dressed.  Not only was this no problem, when I got to Zehr's there was (in a very crowded lot) an empty space right in front of the door.  It was closer than the handicapped spaces.  Good omen, indeed.  I got the food back to the suite and then went downstairs and reheated some cold pizza from yesterday.  The  girls arrived back just after 12:00 and I drove the men's boutonnieres over to Zofia's house.  On the way, a small patch of blue sky showed through the overcast.  The guys were relaxed and watching TV, but the pace was about to pick up.

I started to get dressed up in my monkey suit.  It all fit quite well, but I eventually needed some help with the shirt studs.  Sandy got dressed as well and we went down to the lobby wait for the bridal party to descend. 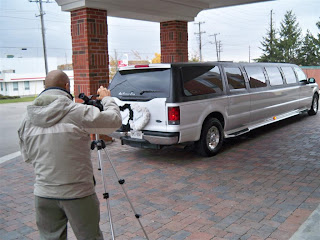 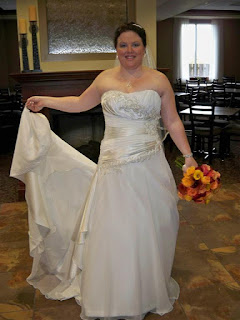 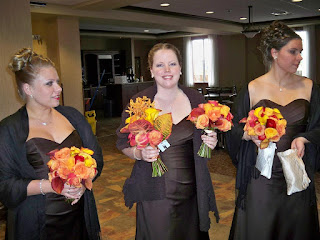 Then it was off to Zofia's to collect the guys and get some photos taken.  Sandy went in the limo with the bridal party while I took Jan, Harry and Jessica in the Caravan. 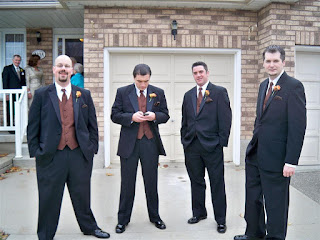 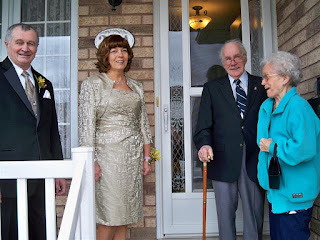 There were two video cameras and the still photographer today.  They got some shots at Zofia's of the bride, the groom, the bride and groom, the wedding party, etc.  Then we piled into the vehicles and drove to the Sun Life building for photos.  The limo parked right on the street, causing some traffic consternation and we had to wait for another wedding party to vacate the steps as the wind picked up and a little rain spit on us.  The limo driver, Mark, was a jack of all trades.  He cleaned a spot of dirt on Heather's gown and said he was prepared to sew buttons or anything else that was required.  He was also the brother-in-law of Dr. Huneault in Sudbury who did Sandy's surgery back in 2007. 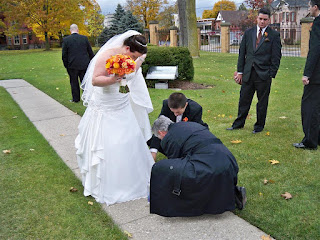 Once the grandparents and parents were done being photographed, I took our van with Harry, Jan and Jessica headed for the Black Forest Inn in Conestogo.  (I learned that Conestogo is not the home of the Conestoga wagon, but that the settlers here came from the  Pennsylvania Conestoga Valley where the wagon did originate.  Conestogo is a heavily Mennonite area).  As we waited for the limo, people started to arrive and John G. got this picture of me all dressed up. 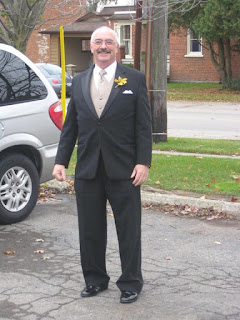 Me all cleaned up

The limo arrived with time to spare and we moved inside for the Big Event.

You clean up nice, Skid.