With Heather and Tom's wedding only two weeks away, we decided to drive to Waterloo for (Canadian) Thanksgiving Weekend. We took the van because the weather is just too unpredictable at this time of year.
We left after I completed my gym workout and paid the bills, getting away about 11:00. The vehicle choice was validated when we started to encounter rain about 20 miles south of Sudbury. It rained all the way, much of it hard and cold. Sandy got some coloured tree pictures as we rolled along, but the best ones were ruined because of the rain. Best colours, if anyone is looking, were on highway 400 between the Moon and Musquash Rivers. 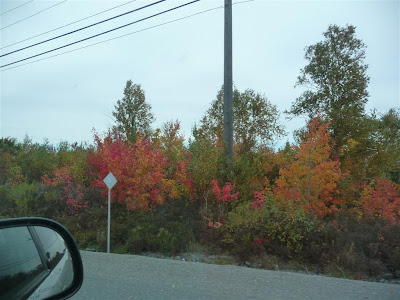 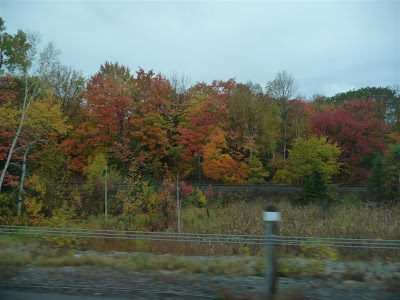 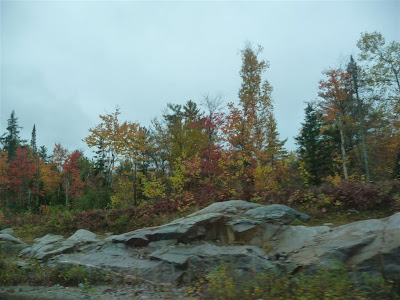 Some Fall Colours
It was a slow trip because of traffic. We took Highways 9 and 24, and tried the new shortcut on Wellington 32. We still went through Guelph traffic but I think I can beat this going back via Laird, Downey and Stone Roads. We'll check it out on Monday.
We arrived at Kim and Mike's about 5:00 PM. Jolene is standing all the time now, occasionally unsupported, and can clap, wave and high five. I expect it won't be long before she takes those first steps. After Mike got home, he ordered pizza and salads for supper.
We left Cambridge about 8:00 PM in hard rain. On the 401, traffic was dead stopped westbound so I took a detour up 24 and across Maple Grove Road to Highway 8. Thank goodness for GPS because we had never been this way before, although when we crossed Fountain Street by the Toyota plant I knew where we were. As we went up the ramp onto 8, the other direction was stopped for an accident right there at the ramp. A dark rainy night is about the worst driving I know short of an ice storm.
We got to Heather and Tom's and visited a bit before hitting the sack.
Posted by Jim "Skid" Robinson on 10/09/2009