Today was the day we would head south for Heather and Tom's wedding.  I was up before six and laid out my clothes for Sandy to pack since we were (uncharacteristically) sharing one large suitcase.  Then I left for the gym in a cold rain.

While I was working out, Luc and Shannon on the radio kept reporting that freezing rain was approaching from the north.  Cartier, then Chelmsford followed by calls from Garson, which is right next to us.  Luckily, when I went out, the rain wasn't freezing.  Instead, we had big white snowflakes falling.  Thank heavens for Al Gore and Global Warming because I'd hate to see what would be going on if we weren't warming up uncontrollably.

At home, I loaded our gear into the van as the white, fluffy stuff started to stick. 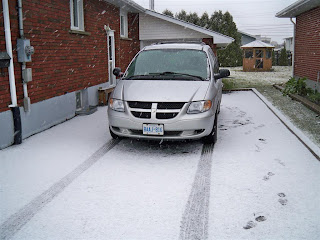 The van is ready to go

We picked up Jan and Harry and were on the road before my target time of 9:30.  Traffic  was light and the snow changed back to rain before we got to the French River.  The rain would remain with us all the way.  There was a lunch stop at Subway in Waubaushene where we got Meal Deals to go and forgot our cookies.  Then I went across 89 to Alliston, down Tottenham Road, across the Hockley Valley and down to Fergus.  We took Jan and Harry across the Kissing Bridge and showed them where we camped for Cyclefest.

The Destination Inn, where we had two suites booked, has grown since the last time we stayed here.  The tower and suites are new and the place is very upscale.  We took the luggage to the rooms on the four floor and then I headed for Cambridge to pick up my tuxedo at Moore's.  I tried it on and everything fit.  On the way back, I picked up Kim and Heather's friend Jessica in Kitchener and brought her to the hotel.

After killing a bit of time, we drove out to Conestogo to the Black Forest Inn, the site of the wedding and reception, for the rehearsal.  We met the Planner, Barb, and the Officiant, Trish, as the clans gathered to receive our instructions.  An Officiant is a secular individual authorized by the government to perform wedding services.  The Black Forest is a restaurant part of the time so we practiced while the diners looked on, some weird kind of impromptu dinner theatre. 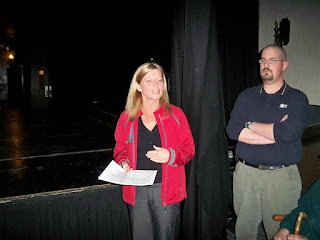 Trish lines up the wedding party 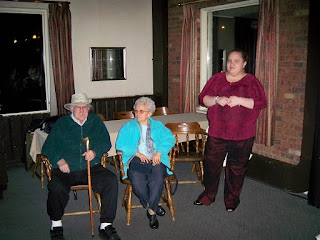 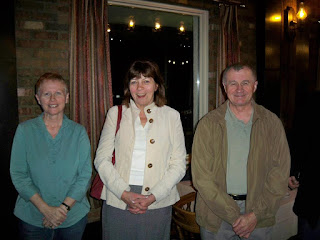 After we had rehearsed, the crew adjourned to St. Louis Ribs on Northfield for the Rehearsal Dinner.  We all fit into the back room where a young lady named Whitney took care of us single-handedly.  She did an excellent job and we at while Heather and Tom presented gifts to the people who would be standing with them.  They also gave the parents very nice electronic picture frames.

On the way out, Mike, Tom and I reviewed the critical path for Saturday, especially clarifying the responsibilities each of us had.  After that, I dropped my team at the hotel and gave Jessica a ride home before returning and turning in for the night.  The beds and pillows here are very comfortable.
Posted by Jim "Skid" Robinson on 10/22/2009