Today is the fifth anniversary of the wreck on the Blue Ridge Parkway that took Rick "Wolfman" Jakubas, VROC #3, from us. Rick was one of the very small group of people who got VROC started and was responsible for our excellent website. RIP Rick. We miss you.

Some thunder boomers rolled through the campground at 6:30 and the rain continued until 9:00 AM, when we finally headed next door to Dilbert's Cafe for breakfast. 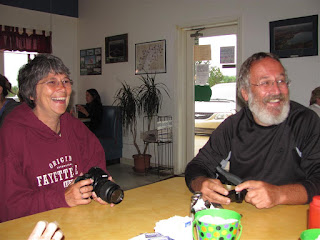 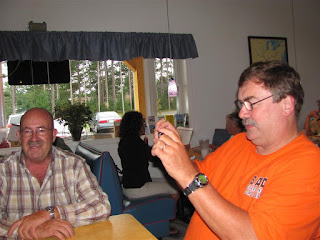 Zever and Stewey
Back at the campground, Stewey's smart phone (a very handy device to have around) showed that the rain should be over for the immediate future and so we planned to take a little ride. We all went, with KT and Wrong Turn following in the Jeep. 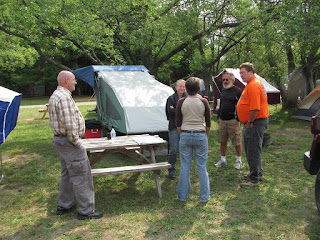 Zever, Sandy, KT, Wrong Turn and Stewey talking ride options
I had a couple of errands to run first thing and so the group decided to accompany me. First we stopped at a nearby post office so I could mail the refurbished Zumo to Art in Albany. I figured it would be easier and safer to ship from within the US. Cheaper too. Then we rode into Traverse City and stopped at a Radio Shack so I could buy some Deoxit spray contact cleaner, the kind Mal had in Colorado that fixed my cruise control buttons. I also bought some battery powered speakers for the Netbook.

Now that the business was done for the day, I led the group along some back roads to M 72 and followed that to the village of Empire where I planned to stop for ice cream. Alas, the ice cream shop was closed up and for sale. Then I looked forward to a ride down M 22 but found the best part of the road was being reconstructed. Figuring we needed some consolation after these disappointments, I took the gang on down 22 and across Crystal Road to the Cherry Hut in Beulah where we had pie, ice cream and coffee. 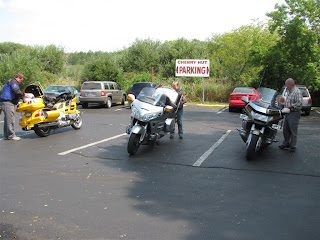 The lot at the Cherry Hut, Beulah Michigan
Full of pie, we headed back to the campground. Sandy and I went on into Interlochen and got some supplies at Tom's grocery store. Back at camp, more people had rolled in and we spent time visiting until it was time to go to supper. 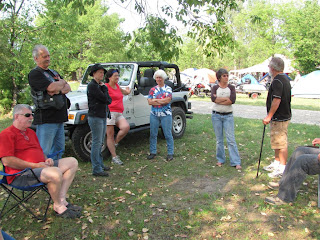 Rainman, Big Grouch, Sandy, Fireball, Marlene, KT and Wrong Turn
In a simple mood, Zever, Stewey, sandy and I went over to Culver's where we had burgers and fries. Then Sandy and I split a two scoop caramel/cashew sundae for dessert.

The campfire was roaring at one end of our campsite while a few of us sat back and caught up on recent happenings. As is usual these days, we were in bed by 11:00.