Four of us from the S.T.O.P. program, me, Terry, Norm and Real, went for a Sunday ride today. Real and I were at the Tim's on Levesque Street on Time but Norm and terry were a bit late. As I guessed, Norm's Drifter, which doesn't get much use, had a flat battery and needed a boost.

We headed east, stopping for gas in Wahnapitae where the Drifter needed another boost. then we continued on to Sturgeon falls where we stopped at the Sturgeon River Inn for the brunch buffet. It was a good spread and we ate well.

The Drifter needed yet another boost to get going and then we continued east to North Bay. Terry led and I ran a close second with Real, new to group riding, third and Norm bringing up the rear. In North Bay, we headed south on Highway 11 to Burk's falls where we went looking for the Screaming Heads.

The Heads are not well marked but Normie got us there, along Midlothian Road of Highway 520. This is a labour of love for the eccentric gentleman who makes the sculptures out of concrete and places them around the sizable property. You can see from the website that he has a plan. In fact, the place is quite spooky even in the daylight. 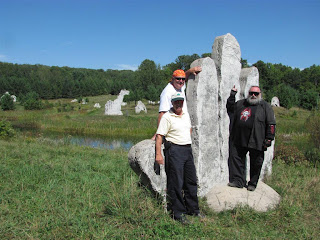 Real, Terry and Norm at the Screaming Heads 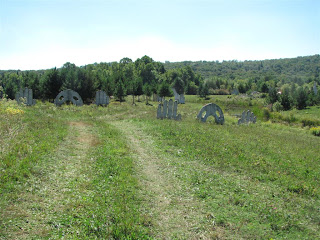 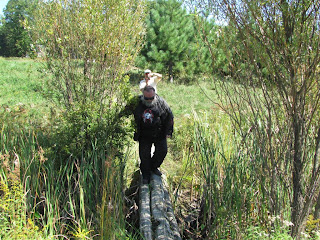 We were waiting for the splash
Our tour of the Heads complete, we returned to Burk's Falls for fuel. When I went to pay, I discovered my credit card was missing. Luckily, the Visa slip from the Sturgeon River Inn had their phone number on it so I called. The young lady I spoke to had my card and said it would be held until I came back for it.

Knowing the card was safe, we didn't rush straight back. Instead, we went back up 520 to Highway 124 and followed that to Parry Sound. There, we headed north on Highway 69 at a moderate pace. We had to wait at the Key River Bridge, which is expected to be down to one lane for a year. Welcome to the north, where we don't have much in the way of alternate routes.

Wile waiting for the bridge, I asked Terry (whose Valk is notoriously thirsty) where he planned to get gas. He said the Petrocan at the corner of Highway 64. I had to tell him it closed down in the spring. We stopped right over the bridge at the Esso but it was out of gas. "Sorry for the inconvenience", it said. Inconvenience? With most of the other stations closed, that could be a disaster for someone. Lucky for us, we had enough gas to make it across Highway 64 to Noelville.

Up through Lavigne on 64, we turned east again on Highway 17 to Sturgeon falls where I retrieved one Visa Gold card. Then we all road back to Sudbury into the setting sun. The others went on the Shaughnessy's Restaurant for wings while I went on home for supper.

It was a good ride today. I don't get out with Terry often enough and really enjoy putting on some miles with him.