I had noticed before the Freedom rally that the left fork on the Wing was leaking a bit of oil. It looked like the fork seal had been compromised, probably due to a bug carcass or grit getting on the unprotected (because of the Kuryakyn fork brace) fork tube. In addition, I had been planning to have the rear shock rebuilt since it was way over the interval suggested by Traxxion Dynamics.

Since my shop won't touch the high tech aftermarket suspension, I contacted Paul at Youneeditdone in Merrickville Ontario to arrange for a complete servicing and the installation of a Traxxion fork brace with guards. He ordered all the parts and we picked August 10th to do it, so today I needed to head down there.

On the way out of town, I swung by the police station to drop of a donation cheque on behalf of the Freedom Riders. The city had the traffic so screwed up due to paving operations that I wished I had mailed it. Finally I was on the road by 12:35, heading east under partly cloudy skies on a 25C afternoon.

I stopped at RL Equipment in Verner to pick up two J&M headset cords that had been back ordered. While there, I booked two service appointments, one before the fall trip for new tires and one in late September for a 50K km service. I also ordered two J&M buttons for the passenger, one a CB Push-To-Talk switch and the other to shut down the passenger intercom microphone when not in use to reduce wind noise.

From Verner, I continued east on Highway 17. Outside Mattawa, I saw a vehicle pulled over by a dark red Tahoe with hidden blue/red flashing lights. There is a ghost police vehicle I would never have expected. I noted as I rode that the wind was out of the east, an unusual direction which continued to prove the wind is seldom at my back. The new pavement east of Mattawa is excellent, in contrast to the broken road surface in the small town itself.

In Deep River, I stopped for gas and then had to pass many of the same cars all over again. Further along, traffic was down to one lane east of Cobden. This was right at the entrance to Yonder Hill Campground, a place where several of the great old Ottawa Valley Touring Club Rallies in the Valley were held in the 90's. Then I had to thread my way through a long line that was being held up by two bikes riding at 80 KPH in a 90 zone. I was embarrassed for them.

Turning south at Arnprior, I followed Upper Dwyer Hill Road as clouds developed ahead of me. At the corner of Franktown Road, I saw one of Canada' worst kept secrets when I passed the double fenced property that is home to JTF2, Canada's equivalent to the US Delta Force. I would have liked to take a picture but was afraid they might take exception.

When I turned west along the Rideau Canal for the last little bit into Merrickville, I was faced with a serious looking black cloud. I arrived still dry at the Baldachin Inn, an 1860 vintage building at the main intersection. Originally, this old building is reported to have been the largest department store between Montreal and Chicago. Now it has a restaurant, pub, banquet room and some small hotel rooms. Mine was on the top (3rd) floor with no elevator. I moved down the hall after complaining the the A/C unit didn't work in my first room. 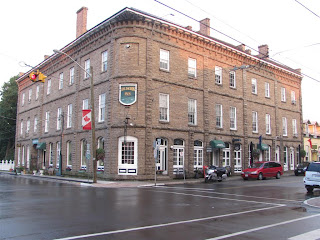 Baldachin Inn - Merrickville Ontario
Ten minutes after I unloaded, the skies opened up. Excellent timing. Unusual for me since, as regular readers will know, my weather luck is not the best when I'm on my own. 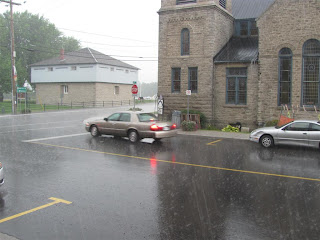 Rainfall outside the Baldachin Inn
I had supper in the Baldachin dining room. The ribeye steak was very good but it was also quite pricey. After supper, I took a short walk around the town. Located on the Rideau canal, it is one of the more quaint and historic places I have encountered in Ontario. The canal has one of many sets of locks here and a tie up area for the pleasure boats that frequent the area. 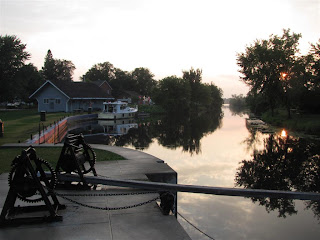 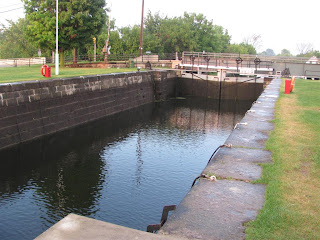 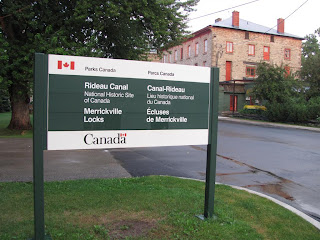 Parks Canada runs the locks
After walking for a bit, I returned to my small room and read some of the Butlerian Jihad, the first book in the Dune Legends prequel series by Brian Herbert. I fell asleep early.