After rain much of the night, some were flooded out this morning and some were fine. It was a quiet day for us starting with the usual breakfast at Dilbert's where I found that a Southern Omelet (filled with sausage and covered with sausage gravy) and a side of bacon are too much to eat.

We hung out at the campground where the soft ice cream was free and Tvlle's wife kept us furnished with cherry pies. A lady camper who retired and then started driving long haul truck (she looked like a school teacher)had a couple of dogs. One was an older German shepherd and the other was a good looking cross between an Irish wolfhound and an Airedale terrier. 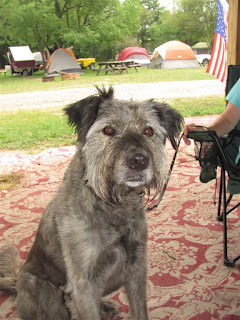 Irish wolfhound/Airedale terrier mix
Stewey packed up and hit the road in the afternoon so he could take the longer route to Peoria, avoiding Chicago and the road construction. Zever left soon after headed back to southern Ontario.

Some of us decided to go to Giovanni's, just down the road, for supper. I led, followed by Big Grouch, Shoot, Scotty and Marlene. I guess when I slowed near the crossroads because of the Jeep ahead of me stopping to make a left turn, Shoot didn't notice because there was a sudden squeal of brakes from the rear. It was both Shoot and Scotty. Luckily, they got stopped before anything made contact.

Supper was OK but not spectacular. I seem to remember their fare being better last year. Back at the campground, we took down the awning while it was dry in anticipation of packing up in the morning.