This Sunday morning was cool and foggy. A somber day to remember the attacks on 9/11, ten years ago. It is hard to believe it has been that long.

Sandy and I decided to be a little healthier this morning and ordered the granola and fruit breakfast. Guess what? They were out of granola and fruit. I settled for bacon and dry French toast while Sandy had syrup on hers. We said our goodbyes and were on the road just before 9:00 AM. My initial plan had been to take two days to get home but it was only 627 miles, according to the GPS, and we decided to do it in one. I estimated we would be home by 10:00 PM.

My normal route would have been to take US 2 to St. Johnsbury, Vermont. This time, we retraced some of our Friday track by taking NH 115 to US 3, US 302 and I-93. The distance was about the same but the twenty miles on I-93 allowed us to make better time. Then, instead of continuing on US 2 to I-89, we cut diagonally northwest just past Danville on Vt 15 (aka Grand Army of the Republic Highway) and 104, catching I-89 near our turn west towards New York State. We rode this route going to Bethel a few years ago and liked it because of its steady, sweeping curves and the fact that it bypasses the cities.

Exiting I-89 at Swanton, we drove towards the bridges across the two lobes of Lake Champlain. Near the first bridge, I caught up to an SUV loaded with kayaks and bicycles. Obviously real outdoor types. I asked Sandy to get a photo so she was ready for what happened next. As we entered a straight stretch, the driver slowed right down. No signal so I assumed he did this to allow me to pass. Assuming, of course, makes an ASS out of U and ME. As I prepared to move left and cautiously overtake, he turned sharply left into a parking area with no signal or mirror check. I hope he is better with his toys than he is with his vehicle. 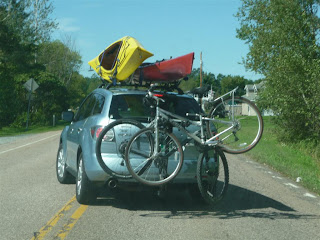 Unsignalled left turn - I couldn't get a licence number if I wanted to
We crossed into New York and left the clouds of Vermont behind. I am sorry the map is a bit inaccurate but Google Maps doesn't realize that the bridge at Rouse's Point is passable. I see someone complained about this in June but no one has fixed it yet. We stopped at a Price Chopper in Champlain to get Normie some Cherry Coke (unavailable in Canada) and grab lunch at the McDonald's Drive-Thru. We each had a hamburger and shared a medium order of french fries.

Continuing on, we stopped in Chateauguay, New York at a Stewart's gas station and store. In addition to fuel, they had great root beer and ice cream but all we took was the fuel. After all the slow driving in the Green and White Mountains, we got 25.1 miles per US gallon on this leg, better than my highway average of 22.4. I wanted to fuel up before the border and could have gone further but I didn't want to patronize a station on the Mohawk reserve because I won't support a business that dodges paying the same taxes as everyone else.

We crossed back into Canada at Massena/Cornwall. We stopped for a traffic light on the bridge where it was down to one lane for repairs. Then we passed the defunct Canadian customs station on Cornwall island. This was abandoned after the Mohawks, whose reserve includes the island, got upset over the arming of Canadian border agents. Finally, we saw a billboard on the Canadian side that advertised "Cornwall bridge is falling down....". I see there is a plan to replace the decrepit old bridge with a new $75 million causeway. I am all in favour of tearing the bridge down and closing the crossing. We can use Prescott/Ogdensburg or go to Quebec. The Mohawks can build their own bridge if they want to instead of claiming sovereignty while using our infrastructure. Maybe I am just getting old and crabby.

The interview at the border was enjoyable. I declared we were gone three days and had about $150 in goods (boots, book and Cherry Coke) and we were on our way in less than a minute. I guess if the heinous felon James L Robinson wants to leave the USA for Canada, we'll let him in.

Leaving Cornwall, I saw a Texas BBQ place that was closed down. I never knew it was there. My loss. We drove up 138 to Highway 417 and headed for Ottawa. The traffic was moving along at 110 to 115 KPH, a far cry from the days when this was one of the fastest stretches in Ontario and being passed at 100 MPH was a common occurrence. Traffic through Ottawa at 4:00 PM was surprisingly light and didn't hold us up at all. We did encounter the usual middle lane hogs on the six lane, one reason I wish I was equipped with push bumpers. Again, I am getting old and crabby.

We stopped at Tim Horton's in Deep River as the sun was setting for supper to go. I got two chicken ranch wraps and a muffin while Sandy chose a new sundried tomato asiago parmesan specialty bagel, which tasted like pizza. Wow. Continuing northwest, the sun was low on the horizon and often in my eyes, highlighting the pitting my windshield has taken over the last 175,000 Kms. 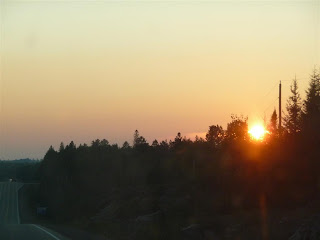 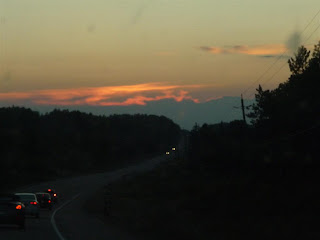 At last, I can see again
We drove past North Bay and stopped for fuel in Sturgeon Falls. Sandy took Windex to the inside of the windshield, which helped the view. The rest of the trip was pleasant with a bright moonlit night and a cleaner windshield. The towns counted down the familiar path which I could almost do in my sleep. Sturgeon Falls, Verner, Warren, Hagar, Markstay, Wahnapitae, Coniston and, finally, Sudbury. We pulled into the driveway at 9:34, slightly better than my morning ETA. It is, however, slower than the old days when I used to travel much faster, but we got here.

This will be, barring unforeseen circumstances, our last trip of the year outside Ontario. We had planned to go to Eureka Springs, Arkansas next weekend but Sandy managed to get an appointment with the local neurologist on Friday and that takes precedence. We will, however, be making several trips to see the kids and grandkids in the next couple of months and I will get some bike riding in before the snow flies.