We were greeted by a very nice morning. I was surprised to find my wireless Rocket Stick couldn't find a signal because Tom had used it last night. On the plus side, there was a WiFi hotspot within range so we were able to get on line.

Tom told me he hadn't paid for our site so I walked over to the office at 8:00 AM to get things squared away. My hip was causing pretty intense pain when I walked. And the office wasn't open, so I limped back to the campsite. I took a few minutes and pulled the seat off the bike to remove a button that I had installed to allow Sandy to shut of her microphone when the wind noise became annoying. Unfortunately, it decided to start shutting off the microphone randomly, so it had to go. We walked slowly back to the office at 9:00 and found someone had marked Paid on the list next to our name by some kind of mistake. We paid for the site and got our tag to put on the post.

Al was going to be our guide today for a ride that would explore some of the bays around the Bruce Peninsula. We rode up to his place for 10:00 AM. He led the group up Bruce Road 9 to a side road to Hope Bay. The road was hard pack dirt but the bay was beautiful An excellent beach and no parking places. 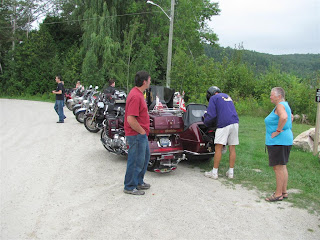 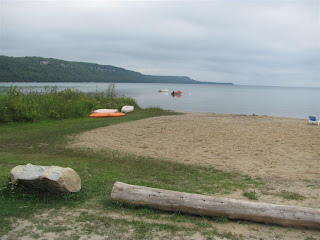 The beach and bay 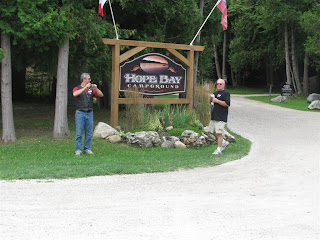 Al and Todd capturing the moment
From Hope Bay, we moved on up 9 to Barrow Bay where we took another side road down to the channel to Little Lake. Again there was no parking area but, this time, there were cottages all the way along. We parked in front of one and the nice couple who lived there allowed the group to use their yard to get close to the channel. 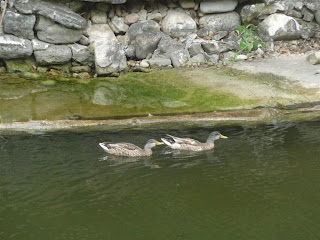 Ducks in the channel between Georgian Bay and Little Lake 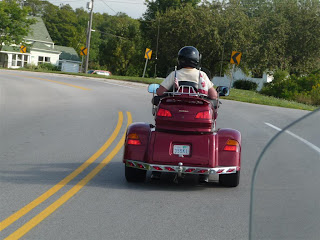 Our leaders Al & Marion on their 2001 Motor Trike Wing
Continuing north along the Georgian Bay side of the peninsula, we stopped at Lion's Head. The regular lot in the park was full so we moved over to one by the marina. 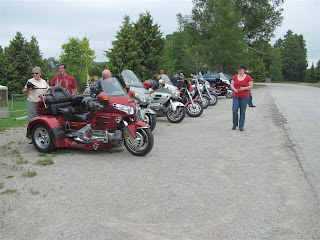 Lined up at Lion's Head Lion's Head Marina
Next, we cut over to the Lake Huron side on 9, which Al informed us ran along the 45th parallel half way between the Equator and the North Pole. We turned north and followed the road through Stokes Bay to Tamarack Island and the Tamarac Island Resort Inn. They were just opening the dining room and we sat down for lunch. I had a chicken ranch wrap and triple cooked chips. The meal was on the expensive side but the food was good. 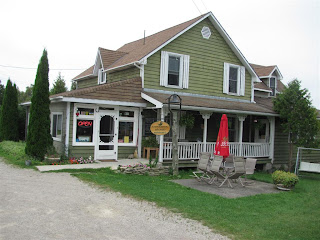 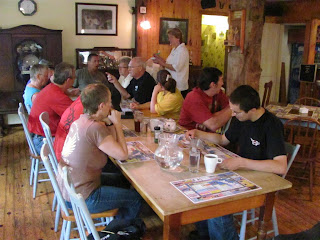 Placing the lunch orders
While we were eating, it started to rain. On went the suits and the consensus was to head straight back to Wiarton. The rain stopped as we were heading south on Highway 6 and it looked like it hadn't hardly rained at the campground.

The plan for the evening was to travel the 50 miles north to Tobermory, the northern tip of the Bruce Peninsula, by car and take the Sunset Dinner Cruise on the MS Chi-Cheemaun ferry. This left at 8:00 PM, crossing to South Baymouth on Manitoulin Island before returning us to Tobermory at 11:45 PM. Al and Marion each brought their vehicles and Lynn had her car so all thirteen of us piled in and headed north about 6:30.

It was a bit of a trick to find parking since the ferry lot was full but we found three free spots on the road. After paying for our tickets, we waited for the boat to arrive. 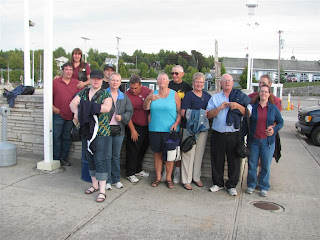 The gang is ready to cruise 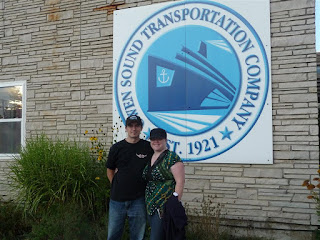 Heather and Tom in Tobermory 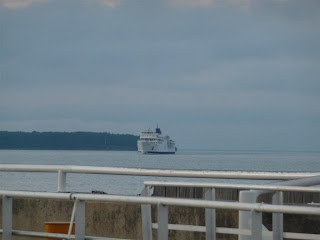 The Chi-Cheemaun comes into view 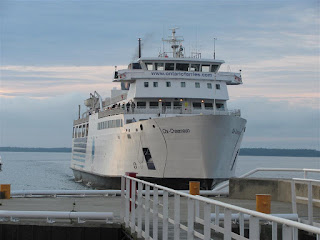 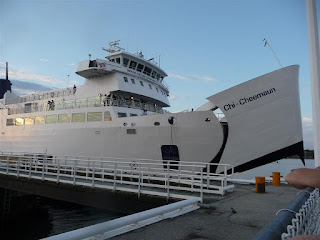 The nose raising to allow the vehicles to exit and enter
Once we went aboard via the pedestrian gangplank, we were directed to the dining room and its nicely set tables. Our server was May, whose name was on a plaque mounted to a skillet commemorating the staff on the first dinner cruise back in 1997. She took the drink and dinner orders. I started with a tomato and roasted red pepper soup while Sandy had salad. She ordered a pork loin while I selected a medium rare prime rib with Yorkshire pudding. The beef was excellent but she found the pork a little dry. 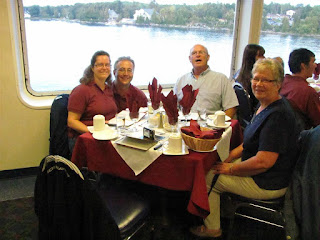 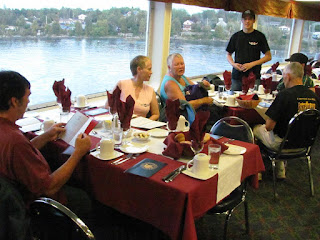 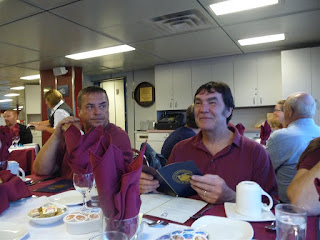 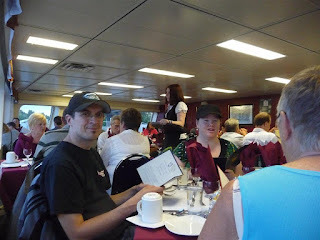 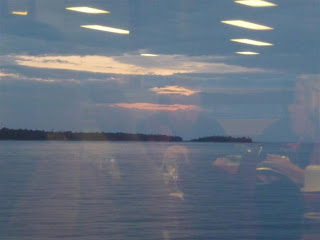 Ghostly reflections in the window 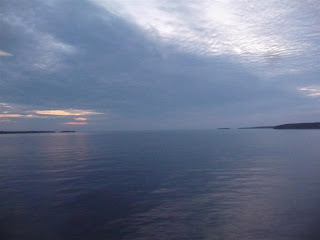 The road to Manitoulin
After the entrees, we opted to hold our dessert for the return trip. I went cruising the decks and found, on the top one, a spectacular display of heat lightning to the south. Then, as we approached South Baymouth, someone to the starboard side had a fireworks dispay on the horizon. I couldn't imagine where that might have been.

In South Baymouth, the cars departed via the stern and we took on a light load southbound. There were three semi's waiting to load and we could see the boat sink several inches as each one came aboard. Then the horn sounded indicating we, the smokers on the dock, should get back aboard. 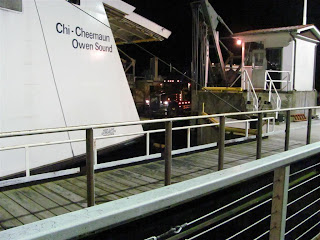 Semi driving aboard the boat in South Baymouth
We returned to the dining room for Turtle cheesecake and coffee. Then we went back topside to enjoy the evening. The return trip seemed shorter even though my watch said it was about the same. before too long, we were back in Tobermory. 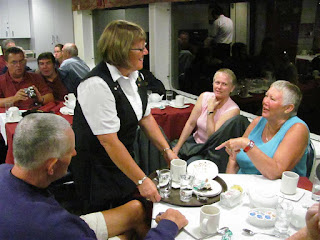 May picking up the dessert plates
The drive back to Wiarton was uneventful except for a few fog patches and an O.P.P. cruiser that went past us (no lights) at a very high rate of speed. We suspect he was late for coffee somewhere. Al and Marion dropped us off at the camground at about 1:00 AM and we all immediately headed for bed.