We enjoyed our Colour Run last weekend so much that Ride Captain Nepper decided we should squeeze at least one more ride in. The forecast for today was excellent so he sent a message out saying that he'd like to lead us to Elliot Lake, about 100 miles west of Sudbury.

The day dawned warmer than last Sunday, 9C versus 4, but it didn't really dawn all  that much. We looked out to see a heavy blanket of fog laying low on the land. Nepper said we should meet at Mr. J's Roadhouse in Lively at 9:30. I wasn't sure whether this meant we would depart at 9:30 or if we would have time to eat first, so I talked to Leo and we decided to arrive early.

Leo arrived at 8:00 AM sharp (the man is punctual) and we headed out through town soon after. Although it was warmer than last week according to the thermometer, it sure didn't feel like it in the damp fog. Sandy had her Gerbing heated liner turned up and I ignored it as best I could. 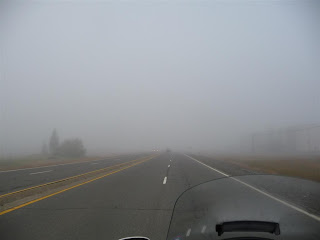 Riding through the fog to Lively
We were the first to reach the restaurant so we went inside and ordered some food. Sandy just took hot chocolate while Leo and I had ham and egg sandwiches. Soon the others started to arrive, most having coffee or some other type of warm beverage. We agreed that we would ride to Elliot Lake and back but would skip the Deer Trail because of negative reports about the pavement condition. We didn't want a replay of last week's Aspdin Road episode. 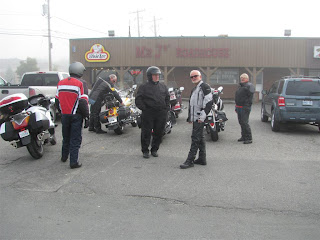 Gathering at Mr' J's Roadhouse
We were on the road shortly after the posted time with Nepper in the lead. We followed Municipal Road 55 through Whitefish to where it joined Highway 17. As we prepared to turn left onto the main highway, another group of bikes went by heading west. We fell in behind them and could tell from the patch on the tail end rider that they were the local chapter of the Canadian Motorcycle Cruisers. They were moving at about 10 KPH above the limit so we followed them to Nairn Centre, where they pulled off at the truck stop. We continued on another ten miles to the Tim Horton's at the Espanola turnoff. 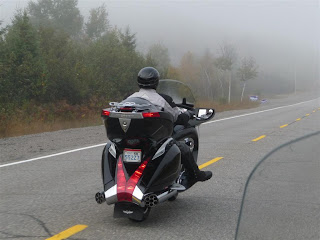 Nepper on his Victory Vision leading us through the fog 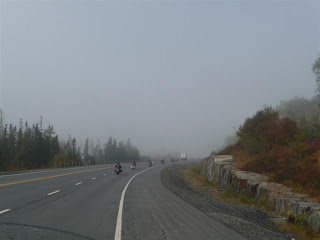 The CMC riders ahead of us
While stopped at the Tim's, I talked to a few other riders who were planning to join some others for a run through the Deer Trail. One was on a Nomad and another had an immaculate GL1100 Goldwing Interstate painted a pale yellow. I wish I had thought to take a picture. Then another Nomad rolled in and Sandy and were pleasantly surprised to discover it was Heather and Jim, a couple we haven't seen in many years. Jim bought the Nad last fall after not riding for over 35 years. They were also headed for Elliot Lake so I invited them to join us. Roger also arrived from the island with a new rear tire on his Harley.

Nepper led us west again as the fog finally cleared. The trees were much more colourful than last week. Sandy took many photos which I posted in a separate entry just before this one. After we passed some slow traffic, I noted that Jim was holding back a bit. Heather wasn't comfortable with the buffeting at higher speeds, so Leo and I stuck with them. Jim is new to group riding but has learned the first lesson right off the bat. Ride your own ride and don't feel pressured to step outside your comfort zone.

Elliot lake lies about sixteen miles north of Highway 17. That last stretch on Highway 108 is a very nice ride, especially when it is bordered by trees of gold and crimson. When we reached town, we caught up with the lead group and followed them to the Fireside Grill. Imagine our surprise in discovering it was now a Shopper's Drug Mart. A nice local lady directed us to the restaurant's new location. I should mention that there was a middle group that had gotten mislaid but they found us as we were moving to the new location. 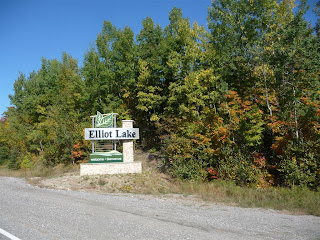 Welcome to Elliot Lake
Lunch was very good. I had half a club wrap and lobster bisque while Sandy had a chicken Caesar wrap and acorn squash soup. After lunch, we headed for the Fire Tower Lookout, located on a hill just north of town. From there, you can see all the way across the lakes and colour-tinged hills to Georgian Bay. 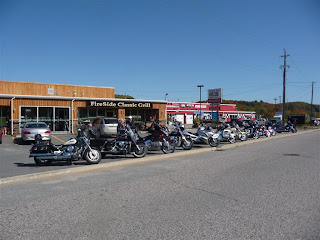 Parked at the Fireside Grill 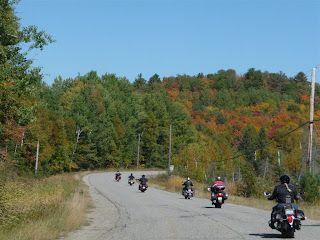 The road to the Lookout 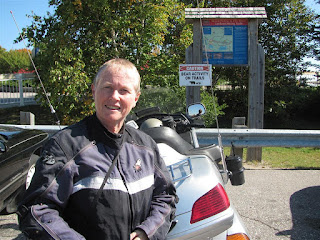 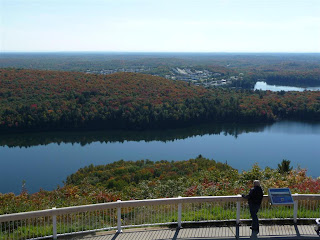 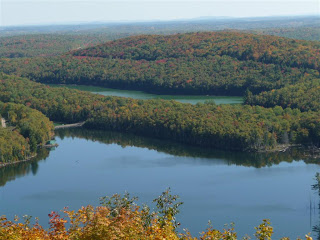 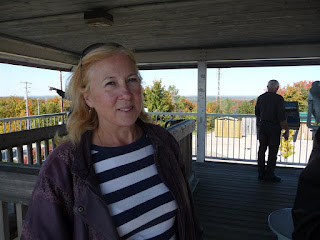 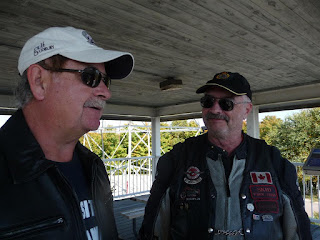 Two Jim's
We left Elliot Lake in two groups. Nepper led the first and Jim and Heather led the second. Gary V dropped into the second group with Leo and I but, since Nepper reduced his pace, we were together all the way to Highway 17. 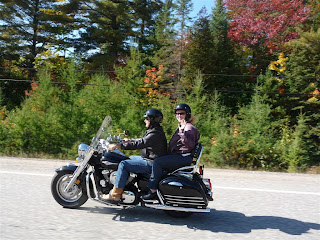 Jim and Heather on their 1600 Nomad 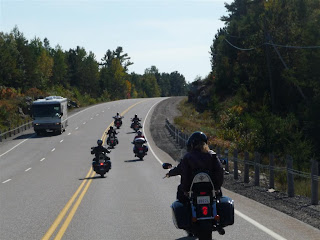 Yes, I waved at the motorhome 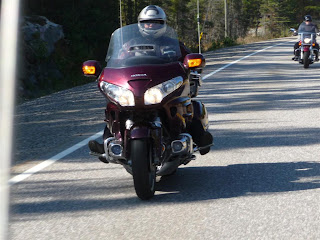 Leo on his pretty '08 Goldwing
The two groups separated a bit once we started east on Highway 17. There was an unplanned stop in Spanish due to a luggage malfunction on Terry's Valkyrie. Then it was on to the Tim's at the Espanola turnoff again, where we made our final group stop. There, wonder of wonders, we met another couple we haven't seen in a long time. Ted and Helena from Blezard Valley, on another Nomad, are a couple we rode with to the west coast back in 2000. That was a significant trip, the first long ride on our 2000 Nad, where we first met Scorpion, Sherm and other northwest VROC icons. 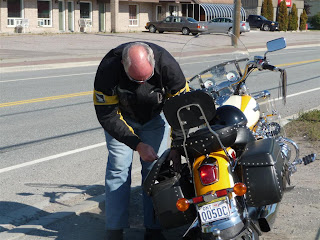 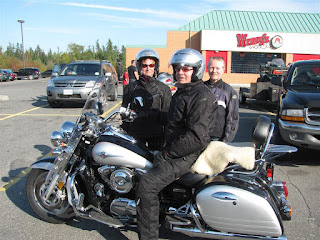 Ted and Helena
The group rolled out while we were talking with Ted and Helena. Then Jim and Heather left after giving me their Email address so I could send them some info on VROC and more comfortable seats. When I finally left, Ted and Helena were behind us but, in my rush to catch the others and get some more spirited miles on, I lost them as I was cutting through the Sunday afternoon traffic. We did catch Jim and Heather just before Lively.

We rode through town and arrived home thankful for another great day of riding with like-minded friends. With the benign way the autumn has fallen the last few years, there may be time to squeeze a few more in before it is time to hang up the helmets.