We had the van loaded and were rolling by 7:40. It was a cool morning with heavy dew but there wasn't a cloud in the sky. We stopped for a Tim Horton's breakfast to go on the way out of town on Highway 17 East.

Our first stop was in the village of Wahnapitae because a school bus was loading ankle biters under the protection of the red flashing lights. When I see all the school buses on the road and realize they are largely moving these kids from here to there and those kids from there to here due to our supposed need for FOUR school boards, I wonder how much of my taxes this takes up. And how much noxious greenhouse gases these chrome yellow beasts belch out. Surely there must be a better way.

We made a pit stop at Tim's in North Bay while listening to a CBC program about some people who moved from the US to Canada 40 years ago and took out Canadian citizenship. The US apparently still considers them US citizens and wants to hit them with large penalties for not reporting their assets held in foreign (Canadian) banks. Yikes.

Near Deep River, we met an O.P.P. cruiser, first responders, an ambulance and then a police supervisor all heading west with lights and sirens. I hope it was nothing serious but am glad that we got through ahead of it, whatever happened.  When they close a highway up here, the detours often involve hundreds of miles.  This one would have.

Another pit stop at Tim's in Deep River. I'm sure you can see a pattern developing:-) In Arnprior, I couldn't find the exit. They had so many orange barrels, I was unable to navigate. This area was heavily under construction at this time last year and they haven't made much progress. We stopped for fuel in Kanata, instead. I wanted a McDonald's lunch but it was inside the WalMart so we got Harvey's burgers to go instead.

At the Cornwall bridge crossing, we had to go inside US Customs again. It seems the notes they put on my file back in May in Buffalo must have been overwritten when the files were updated. I was warned about this. They put another override on it but told me it could easily get zapped again. I'm not sure I put much faith in Homeland Security if their computer systems are this Mickey Mouse. But the agents were friendly so it could have been worse.

NY 122 had signs past Constable warning about rough road. Maybe they think it is rough but I thought it was pretty damn good. We drove across the Champlain Bridge into Vermont and south on I-89 to the Days Inn in Colchester, next to Burlington. I missed the driveway the first time because the dumbass GPS had me looking on the wrong side of the street. Our room has a loft with the bed in it. There were no plain rooms because the whole area, including Burlington, was booked up solid. We're here because the Comfort Inn wanted $149 for a king room, all they had left and that was too rich for my blood. 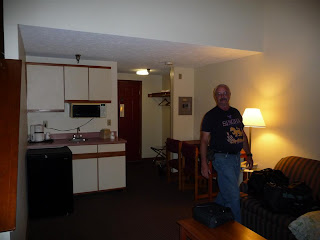 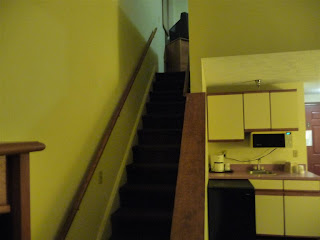 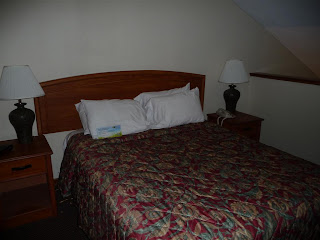 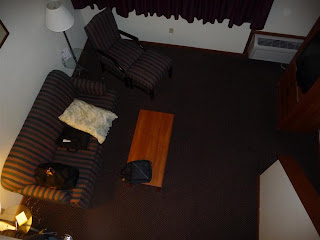 We went to Friendly's for supper. The server sure was friendly but they post the calories of all the selections on the menus. What a buzzkill. I had a sandwich and clam chowder while Sandy had half a sandwich and salad. We looked at the ice cream selections on the menu and then skipped dessert. After weeks of wildly fluctuating blood glucose readings, I have been happy today. It was 7.2 (130) this morning, 4.1 (74) before lunch and 4.4 (79) before supper.

Back at the room, we hooked up the computers. Mine was fine but, after connecting, Sandy's couldn't reach the Internet. I never know what the damned Vista is doing but I fixed it by telling it to get a new IP address. Bingo.