It was a cool and foggy morning in Colchester, Vermont. We got up, loaded the gear in the van and then had ate our continental breakfast in the hotel breakfast room. Out in the lot, we saw a TomTom camera car. I guess they are going the same route as Google, although it seems like a lot of duplication to me. 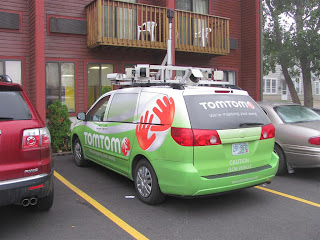 TomTom camera car in Colchester Vermont
Our first destination today was the Whitehorse Gear headquarters in Conway, New Hampshire. I have been wanting us to switch to Tourmaster Solution boots for some time because they are fully waterproof and we'd be able to ditch the infernal rain totes, but I won't buy boots without trying them on.

We headed south on Interstate 89 through patches of fog. It still amazes me how many people drive in fog without turning their lights on. We left 89 at the state capital of Montpelier and took US 2 east past the gold domed Vermont State House. This was a notoriously rough road that has been much improved since our last visit here. Traffic on 2 was light to non-existent and we moved right along. Past St Johnsbury, we took I-93 south to US 302. 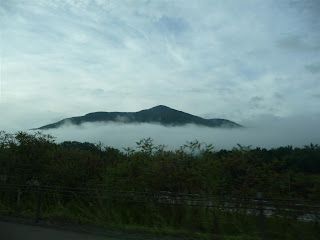 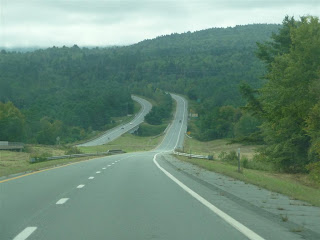 I-93 rolls through scenic Vermont countryside 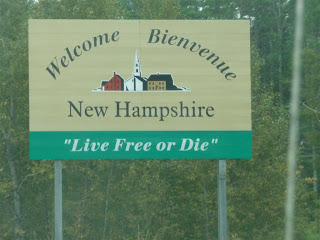 Welcome to a state where they really advocate freedom
US 302 should have taken us to Conway but that was not to be. There was a bridge out, courtesy of Hurricane Irene, and we were detoured from Twin Mountain north on US 3 and New Hampshire115 back up to US 2. It would have been shorter to stay right on 2 from St. J but we would have missed the enjoyable drive along 302.

US 2 took us to Gorham, New Hampshire which put us close to Bethel before we turned south on new Hampshire16, which took us south past Mount Washington and into Conway. On the way, we saw Brake for Moose signs, leading me wonder once again who (in their right mind) wouldn't brake for an animal that size. We also saw numerous construction zones and closed side roads as the state struggled to repair the damage that heavy rains from Hurricane Irene caused. In one spot, 1/3rd of the highway was washed away. Luckily it happened at a spot where there was a passing lane. Near Conway, we saw a lot of bicycles escorting eight handcycles and a bus that claimed it was for Evening Moose Tours. 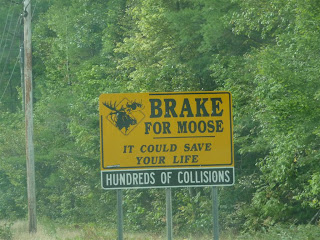 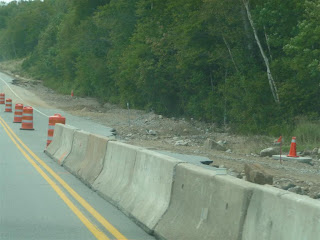 Highway washout on New Hampshire 16
Whitehorse Gear is located a little off the main roads in Conway. Luckily, they post their GPS coordinates on their website and the Garmin took us right to the door. It was an unassuming white building guarded by a huge dog named Hudson. They claim he is half Newfoundland and half standard poodle but I see hints of wolfhound in him.  At least he was friendly.  I tried on a pair of size 10 boots and then opted for 11's to give me a little wiggle room. Sandy tried a pair of ladies 6.5's but they were too tight around the calf and her feet were swimming in the 7's, so we will have to find her something else. We also looked at convertible jackets but didn't see anything better than what we have now so will hold out for Rocket Alter Ego 3's, which are totally waterproof, later on. I did buy a returned copy of Bob Woofter's Motorcycle Camping book, $24.99 retail, for the princely sum of $3.00. Our Nomad is on page 44, a photo taken by Bob at Lake George back about 2002. 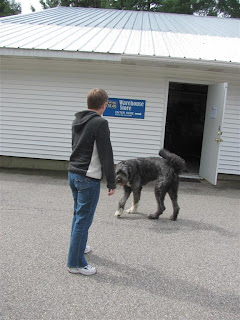 Hudson greets Sandy at Whitehorse Gear
From Conway, where we grabbed lunch at McDonald's, we crossed into Maine and caught Maine 5 in Fryeburg. They were holding a Good Sam Samboree there and, as members, I was tempted to stop but we pushed on.

Highway 5 has been resurfaced. It isn't a pretty job but the new layer of asphalt is certainly effective. It took us right into Bethel where we were the first to arrive at the Sudbury Inn. We got the keys to Room 21, our traditional spot on the 3rd floor front. Not five minutes later, Ol' Phart Joe & Karen and Lost Bob & Laurie arrived, having come in the same route we did. 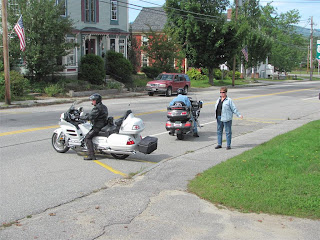 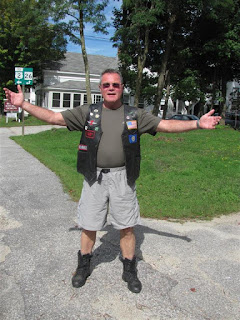 Lost Bob in all his sartorial splendour
After getting our bags to our room, we adjourned to The Suds Pub for a few drinks while we waited for the rest of the gang. Steve and Dee were next.  Dee coached me while I played a game of cribbage against Joe. I haven't played in many years and needed all the help I could get. I actually drank a couple of Guinness'. The rest arrived later including Brad & Judy, Homer & Sylvie from Quebec, Ralph & Dawn, Bobcat & Jewel, Jessica & her beau and the inimitable U-Turn. We had supper in the pub, with Sandy and I sharing a pizza. 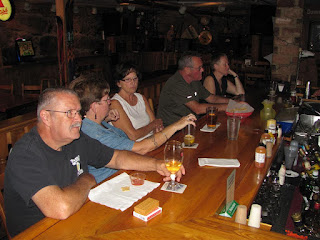 Ol' Phart Joe, Karen, Laurie, Bob and Sandy at The Suds Pub
We spent the evening socializing and joking, but had to speak louder after the entertainment, a local gentleman playing guitar on stage, started up. The music was OK and some of the blues guitar numbers were pretty good but we wanted to catch up with each other and probably didn't appreciate his efforts as much as we should have.

Eventually, people started to wander off to their rooms. It was about 10:00 PM when it was down to U-Turn and I so I bid him good night. From what I heard later, he didn't go straight to his room but continued to enjoy the Bethel night life for a while longer.