We awoke at 5:30 to the sound of hard rain on the roof. Sandy said it also rained earlier but it didn't wake me. By the time we got up at 7:00, it had receded to a light drizzle that stopped completely soon after.

The Niagara Escarpment runs up through the Bruce Peninsula. This limestone structure goes from upstate New York all the way to Wisconsin via the Upper Peninsula of Michigan. In this area the rivers and streams fall off the edge of the escarpment forming a series of waterfalls. The Grey County tourism people have put together an interesting guide to the various falls and, on this overcast morning, Al and Marion were going to lead us to see some of them.

Sandy, Heather and Lynn decided that they would stay behind today. The rest of us geared up and hit the road about 10:00 AM. Al led us out of town on County 1 following the south shore of Colpoy's Bay. Rather than stick to the shore all the way, we turned inland and took a shortcut over the headland, giving us a spectacular view as we descended the other side.

The first stop was at the Kemble Women's Institute Overlook. This commemorates the oldest active women's institute in the world, established in 1897 by a group of local ladies. 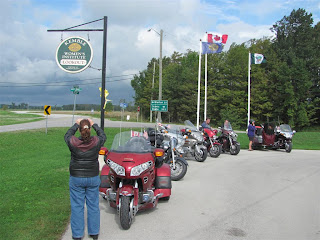 At the lookout with threatening skies in the background 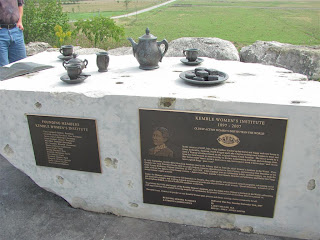 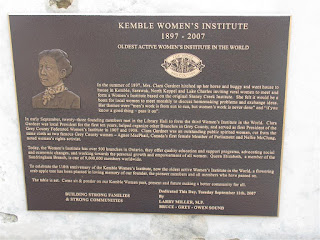 These ladies were ground breakers in their day
From the lookout, we rode on down and around the town of Owen Sound to Inglis Falls, the site of an old grist mill. We paid the $3.00 parking fee and went to see the falls. As usual, I was moving slowly due to hip pain. 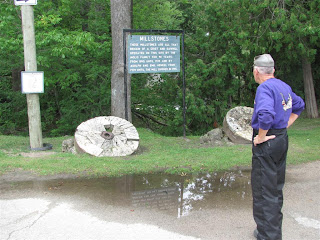 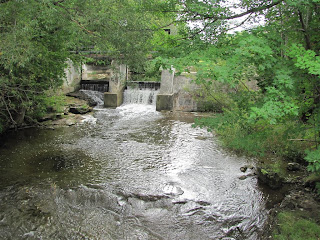 The site of the old mill 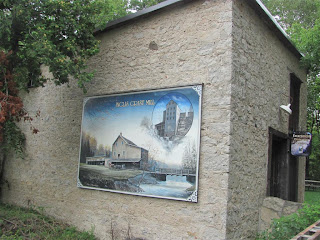 Artist's depiction of the old mill 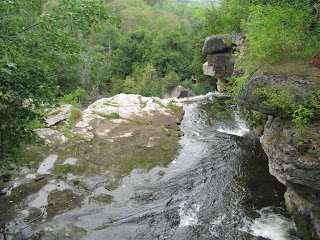 The water falling off the edge of the escarpment 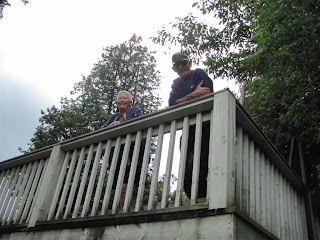 Maysey and Kevin on the upper lookout 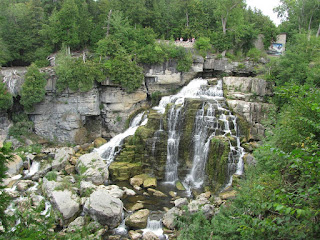 The 18 metre Inglis Falls
From Inglis Falls, we rode to the junction of Highways 6 and 10 where a few took on fuel. Then we rode into Chatsworth where we stopped at Kettle's Back Home Cooking for lunch. We were lucky that they had a table for ten because, as soon as we were seated, the lines at the door started to build. I had a Ma Kettle's Burger which had, in addition to a home made patty, ham, bacon, mushrooms and double cheese. Add lettuce, onion and tomato and it was hard to get my mouth around. And it was also very good. 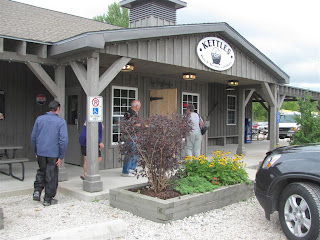 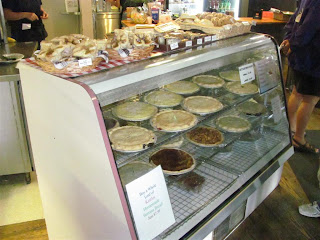 And baking
From Chatsworth, we rode on to Walter's Falls. The Falls Inn And Spa is located adjacent to the falls and looks like an interesting place to stay. Maybe some day in the future. The falls themselves have a lookout but the railing appeared to host a wasp's nest. Kevin stopped a young fellow with more curiosity than brains from picking up a snapping turtle.  I never did find out who Walter was. 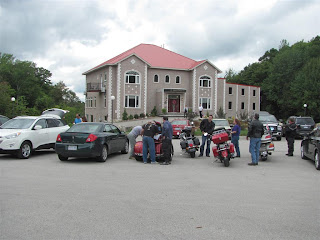 The Falls Inn and Spa 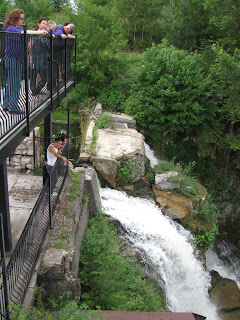 Walter's Falls
As we returned to the parking lot, the skies started to spit on us. Some put on their rain suits but Al and I decided to take our chances. We decided to head straight back to Wiarton through Owen Sound. Over the whole route today, Marion was giving us a travelogue over the CB radios. The rain ended up being nothing of consequence.  Just before we got to Wiarton, we were riding west on County 17 when we encountered a stretch of gravel starting in the middle of a blind curve. Some advance warning signs would have been nice. Luckily, we were traveling at a sedate pace.

We were back at the campground by 3:30. There was a visiting time until the supper Lynn had prepared was ready. The Waterloo Wings have a tradition of members cooking supper and splitting the cost, which invariably ends up coming to $7.00. Today, we had Sloppy Joe's on very fresh buns and several salads. It was very tasty. I enjoyed talking to Al about wells, Wings and work (former for both of us).

As the sun set, Al and Marion left for home and we felt the chill air of a September evening fall over us. This is a great group of people and we are very thankful they allowed us to share their weekend. With the trip home tomorrow, we turned in fairly early.