I overslept a little bit this morning but we were ready to roll out of the driveway at 8:40. I almost forgot to unplug the extension cord from the house but Sandy warned me. By 9:20, we had fueled ($1.287 / liter), picked up breakfast at Tim Horton's and were on the road. The ride seemed OK with the tires at 80 PSI so there probably isn't any reason to run them any lower unless the tread wear shows problems.

The wind was, predictably, out of the south. I almost always end up facing headwinds. The only issue was a bad smell when Sandy used the bathroom. Since we had barely used it at the rally last month, I didn't empty the black water tank and it was pretty rank. My bad. A few shots of the conditioner and the problem cleared up. The tanks will be emptied when we get back.

I was listening to CBC Radio for a while. There was a program called Know Your Rights, hosted by Craig Norris, which appeared to be trying to educate Canadians on just what rights we do enjoy under the Charter of Rights and Freedoms. One caller said that he was not a fan of the Charter because it was all about individual rights and granted no rights to the community. The libertarian in me realized that I had found another enemy to the fundamental principles I hold dear. But this isn't my political blog so I won't go any further with this.

The GPS had us exit the 400 Highway at Horseshoe Lake Road near Barrie. This is a little longer but avoids the congested stretch through Wasaga Beach. Highway 26 through Stayner, Collingwood and Meaford to Owen Sound had some very good sections and some that were choppy. There were several sections where they said construction started last June but no work had been done. I'm not sure what the strategy is because winter is coming soon.

I missed the turn on Highway 6 coming out of Owen Sound. No good reason, I just wasn't paying attention. There was nowhere to turn around so I went on and turned north on County 10. It made the trip a little longer since Highway 6 was the hypotenuse of a right triangle, but we got there all the same.

In Wiarton, I went to the address for the campground and found the office. The young lady confirmed my site and told me it was paid for. That was a surprise. Tom, maybe? We had to go back out onto the street to get to the proper entrance. Since the site was a back-in, I unloaded the bike and unhooked the trailer. The fellow from the next site helped me push it to a good spot and then I backed the motorhome in and hooked up the water and electric. We were all in place by 3:20. The sites are nice with tall cedar hedges protecting you from your neighbors. It was hot and humid this afternoon with the Humidex pushing 41C. 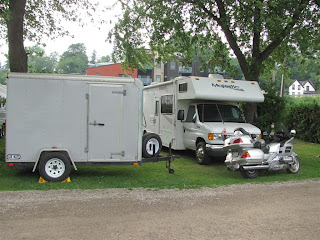 Our campsite
Most of the others were set up already, all in a neat row just down from us. We sat and gabbed for a while, catching up on who had been where. Kevin and Maysey from Cambridge are old friends and were the only ones who had been involved with all the Cyclefests from the very beginning. They have also attended most of the other Ontario club rallies over the last three decades and we have also met them at rallies as far afield as Arkansas and New Mexico. The others are newer friends.

About 4:30, we climbed on the bikes and rode a few miles to Al and Marion's house in Colpoy's Bay. They were originally from this area but Al worked with Kevin for many years and, after retirement, they decided to come home. They have a beautiful R2000 house and hosted a barbecue for us this evening. We set up in the back yard and the chefs cooked hamburgers, chicken burgers and hot dogs. There were also salads and corn on the cob followed by some tasty desserts. It was an excellent meal. Tom and Heather arrived near the end. 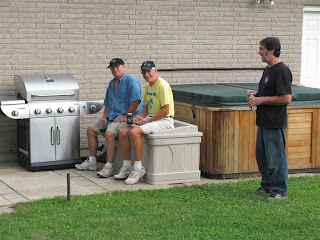 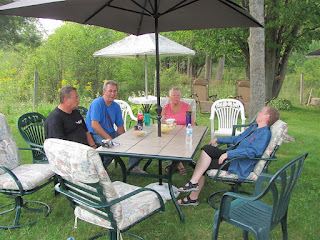 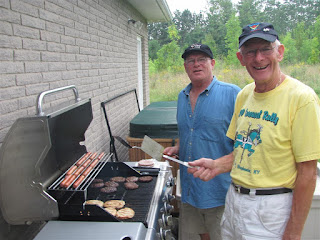 Al and Kevin, The Iron Chefs 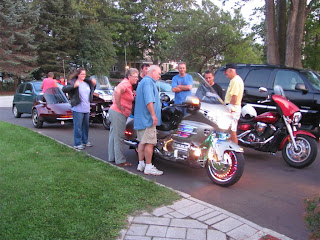 Admiring Todd's lights in the driveway
As the sun was setting, we rode back to the campground. Everyone headed off to their own sites, with Heather and Tom joining us in the RV for a bit to watch a little TV. I went next door and talked to a couple from Toronto with a Class A about RV'ing for a bit. Before long, Heather and Tom returned to their tent and we turned in for the night.