Mother's Day dawned with the news that it was +2 C and had snowed in Sudbury. Luckily for us, there was no white stuff here, but it was cool. I hope all the mothers out there had a great day. With the temperature the way it is, this truck/trailer thing isn't so bad.

We didn't rush and were out of the lot at 7:45. We followed the GPS instructions to a nearby McDonald's for coffee and a muffin to go. Maybe there will be a Mickey D's there some day but all we found was a vacant lot full of brush. Executing a deft U-turn, we headed the other way on Garrison to where I knew there was another and we got our order filled.

At the border, the agent asked where we were going and why. I explained about the bike in the trailer and the great roads in North Carolina. He asked if I owned the trailer and what the plate number was. I had no idea what the tag said and scrambled for the registration. He then asked about alcohol (none) and cigarettes (four packs). He thought I said four CARTONS. Once we cleared up that little misunderstanding, he wished us well and sent us on our way without even looking in the trailer. I guess I am still back in the Homeland Security good books. 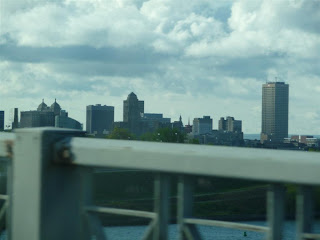 Buffalo from the Peace Bridge 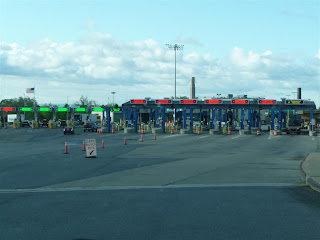 The US border at the Peace Bridge - Buffalo

We headed for I-90 West and passed through the toll booth, letting the EZ Pass take care of the fees. I still have to use a manned lane in New York so the attendant could enter the proper class because of the extra axles, but the transponder saved time and juggling coins and bills. And there was no need to figure out where to stow the toll ticket en route. Pretty good for a device that costs me nothing. The ETR 407 could learn from this.

We proceeded west into what felt like the teeth of a gale. I put the truck in 3rd and set the cruise at 50 MPH. I had adjusted the tires on the truck to the prescribed 30 PSI at home but, unfortunately, I did it at 80 F. Now just above freezing, the sensors were reading 27 so I stopped at the Travel Centres of America in Erie and pushed them all the way up to 35. I also bumped the trailer from 43 PSI to 50. The air compressor was high volume/high pressure but it still cost me $3.00 to get all eight tires adjusted. We'll see if the theoretical reduced rolling resistance has an impact on fuel economy.

It was raining south of Erie but we missed the brunt of it, catching a bit on I-90 and a bit more on I-79. Lunch was leftovers from last night, steak sandwich and chicken strips. They were even good cold. We did get passed by some interesting vehicles. 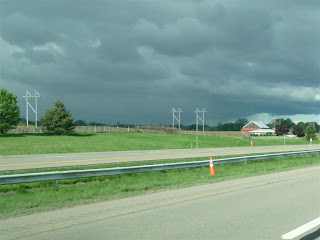 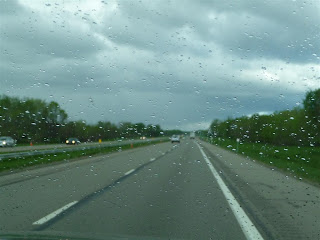 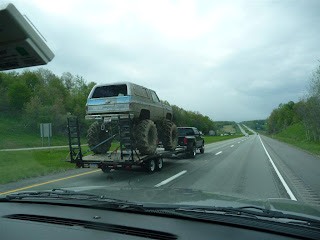 It was 3 C (38 F) as we crossed into Mercer County. How is that global warming working for everyone? We were the slowest thing on the road except for a white Prius driven by and old dude sporting an Obama sticker on the side window.

I stopped for gas just before the north I-279 split. The young lady at the cash wondered if we were going home and was very surprised that we were southbound. She believed us when I explained that we were not normal. We continued south towards West (By God) Virginia, crossing the Ohio River at Mckee's Rocks and up the twisting road that climbed the hill on the other side. 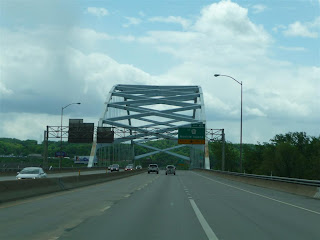 The bridge over the Ohio River

Entering West Virginia, we found ourselves facing another headwind. Seemed like we couldn't find a break. I find in places like this that I often can't tell up from down. If it wasn't for the way the engine was working and the elevation readout on the GPS, I wouldn't have a clue. We made the turn onto US 19 and proceeded due south towards Summersville. 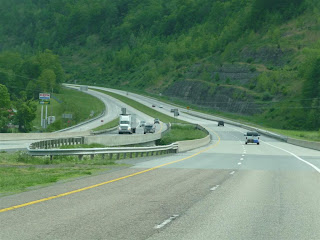 Downs and ups on the Mountaineer Expressway

The plan for today had been to make it to Wytheville (pronounced Withville), Virginia but I had gone through two bouts of fatigue today that had required me to get out and walk around to clear my head. Discretion being the better part of not driving off a mountain, I decided we would call a halt in Summersville, where the hotels were largely unoccupied because it was not yet rafting season.

The Super 8 had room, so we got parked and settled in. The rate was much better than last night although the pillows and bedding weren't nearly as plush. The TV remote refused to work until I discovered that someone had put one of the batteries in backwards. Then all was well.

For supper, we walked next door to Applebee's. I had forgotten that it was Mother's Day evening and that everyone and their dog would be taking Mom out for dinner. Luckily, they were all larger parties with an expected wait of thirty minutes. A party of two was seated at a high table almost immediately. Sandy and I split potato skins and an oriental chicken salad.

After supper, we returned to the room where I sorted photos for the blog and we watched Cochran win the Survivor finale. Then we turned out the lights and went straight to sleep.