I didn't mention in the previous post how, as I was getting ready to deliver carnations and figured my hair could use a trim, I attached the wrong guide to the clippers. Instead of a #2 cut (1/4"). I now sport a #1 (1/8"). Strangely enough, I like it, as long as I wear a hat on sunny days.

Today was the day to leave for SEVROC in Maggie Valley, but first we needed to complete the jobs that we couldn't do yesterday due to the rain. Luckily today was dry, albeit cold. First, I took the truck for fuel. Then I hooked the trailer up and loaded the bike. The lawn needed mowing and, while all of this was going on, I was updating the maps in my Garmin Zumo GPS.

If you aren't interested in GPS's, skip the next two paragraphs. The Zumo is an older 550 and I have come to rely on it heavily. But it has a few quirks. The internal memory is about 1.1 Gb while the current map files exceed this. This means that I can either install a part set of maps or I can install to the SD card, a somewhat more complicated process. The second feature is that the Zumo uses USB 1.1, which means loading a map set cab take up to four hours. Interestingly, there is a single solution to both problems.

The SD card in the Zumo can be loaded in the card reader in the computer for faster speed. For example, backing up the music and audio files on the Zumo would take 74 minutes via the USB 1.1 connection but just took four minutes via the card reader. Rather than install the maps to the Zumo directly (even though I see the new load program will give the choice of which media to install on), I download to the computer. Then, using Mapsource, I can install them to the SD card in the reader. Unfortunately, it took an hour and a half because I had, for some reason, put the SD card back in the GPS. Oh well, I was mowing the lawn and loading the bike while all this was going on and I now have the 2013.4 version of the maps installed. 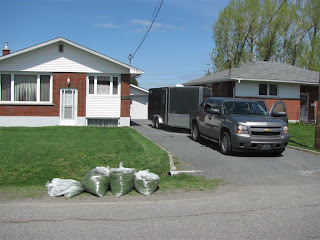 We were rolling by noon under sunny skies, although the temperature had only gotten up to 11C. Southbound traffic was very light and, even though I was travelling at about 95 KPH, almost no one was catching me. At the Alban turnoff, we saw they were golfing despite the construction work. There was silt screening between the fairway and the new road, but folks were out. I stopped briefly at the French River Trading Post to check the bike tie-downs and, south of the Pickerel River, a large bear ran across the road but Sandy didn't have the camera ready.

You don't realize how many hills there are on Highway 69 until you tow a trailer. Near Still River, we met a line of clouds. Entering this zone, we started getting some crosswind buffeting, although the trailer tracked well. The temperature started to drop and was down to 8 C by Pointe Au Baril. 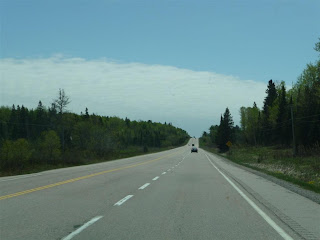 We stopped at the McDonald's in Parry Sound for some food to go. I couldn't help but notice all the solo cars parked in the pull through trailer spaces. But that's OK, I parked in a bus space. By Waubaushene, the clouds cover had broken and there were large patches of blue sky. As we reached Toronto, Canada's Wonderland was open and they had a sign advertising Dinosaurs Alive. We haven't been to Wonderland in many years. Sandy hates roller coasters so I need to find a ride buddy. 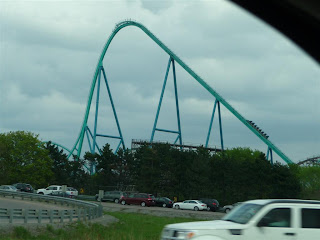 We splurged and took the 407 to the 401 to Kim and Mike's. The side trip was necessary so Sandy could pick up the jacket I had left at Heather and Tom's on Easter weekend. They brought it to Cambridge when they came too visit. The service centres on the 401 are coming along nicely. 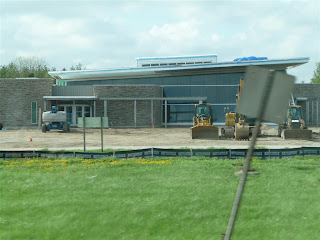 New service centre construction on the 401 near Cambridge

We arrived at Kim and Mike's at 5:30 PM. Heather and Tom were also there, and Tom was on his bike. Jolene and Robyn were both happy to see us. although Kim said Robyn has been scared of almost everything for the last week. This was unusual because, up until now, she has been absolutely fearless. Our planned 15 minute stop turned into an hour but time with grandkids is always good. 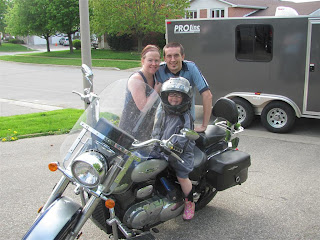 The original plan had called for getting to Erie, Pennsylvania tonight but it was getting late so I decided Fort Erie would be a good place to stop. I called our usual Comfort Inn and found it was now an Econolodge. The desk clerk told me they were renovating and probably didn't have room for the truck and trailer in the lot, so I checked out the only other place there, a Clarion Inn and Conference Centre. They had room and said the parking lot was huge. 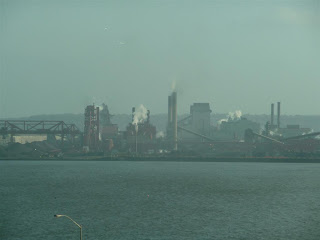 On the way down to Fort Erie, I took advantage of the fact that I now had the NASCAR channel on XM radio and was able to listen to the night race from Darlington. We found the Clarion after wandering a few back roads by mistake and they were right. There were several parking lots and they were all huge. The room was very nice with comforters and lots of big pillows, although that was to be expected for the price we paid.

There was a restaurant, Freelands, downstairs that didn't close until 9:30. I had the soup of the day (cream of mushroom) and an open face steak sandwich with a Caesar salad. Sandy had chickens strips, five large ones. The soup serving was generous with more mushrooms than I have ever seen in a soup bowl. The steak was an excellent New York strip on toasted French bread topped with cheese, mushrooms and onions. The Caesar dressing was just right and the salad had lots of large bacon pieces. Sandy said the chicken strips were great. All in all, it ws a much better meal than I had expected, although there was so much that we packed some of it for tomorrow.

Back in the room, I watched the rest of the NASCAR race on TV before turning in for the night. Tomorrow, we would see if Homeland Security still liked me.