The end of any rally is a bittersweet time as we acknowledge the fun we had but wave goodbye as friends go their separate ways. The weather mirrored our feelings as the rain teemed down when we got out of bed at 6:00 AM. But it started to clear soon after as we packed and, by the time we drove down to Country Vittles at 7:30 with Cheap B for breakfast, the streets were dry. 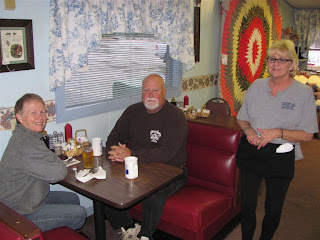 Sandy and Cheap B with our server at Country Vittles

Back at the motel, we loaded our gear in the truck, hooked the trailer up, attached the big mirrors and I pulled the outfit into the street to load the bike. As it sat there with the four way flashers on, Derrick said I commented about parking just anywhere. I told him this was how we do it at home. I don't know if we really do, but the street was pretty quiet and, other than the risk of having some little old lady drive into the trailer on her way to church, it looked like the best way to get the job done.

The bike was loaded and tied down in short order and, after we said our goodbyes to those who were up, we hit the road at 8:35 AM. 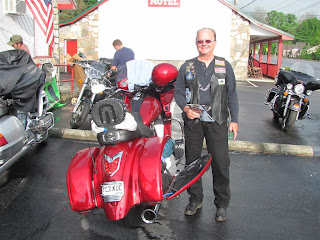 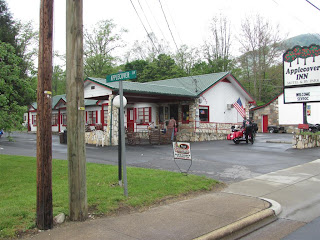 A final look back at our old North Carolina home

We opted to take the I-75 route home so we followed US 19 and US 276 to I-40 West. This stretch of 40 is fairly winding and limits truck to 50 MPH. Light rain was falling but it was warm as we wound our way through the Pisgah National Forest. There were a lot of eastbound big trucks but we had none that we could see going our way. We stopped at the first rest area we encountered so I could check the tie-downs on the bike. They were fine and we continued west. 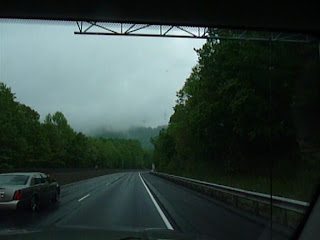 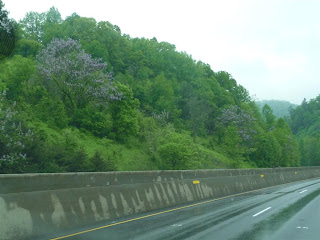 The flowering trees were prettier in real life 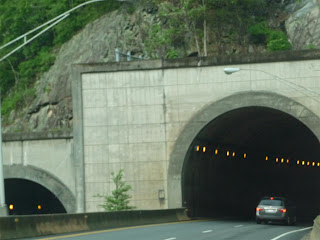 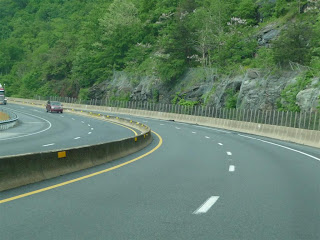 One of the many curves 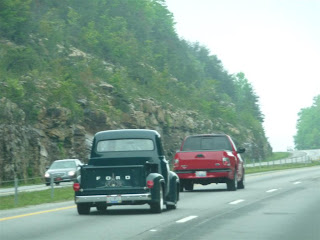 Something old and something newer

The truck was averaging 15 MP(US)G with a tail wind as we crossed the Tennessee state line. Just short of Knoxville, we took I-640 north to I-75. The sky was broken overcast and the pavement dry. I hiked the pace up and we moved along at 65 MPH. I set a Love's truck stop just north of Richmond, Kentucky as our first gas stop.

A funny thing happened with the GPS as I entered this new via point. Originally, when I said to take us home, the Zumo had us crossing into Canada via the Bluewater Bridge between Port Huron and Sarnia. This was my preferred crossing. When I gave it the additional stop along the same road, it recalculated with a crossing via the Ambassador Bridge in Detroit. I have no idea how it works out the routing but I have always maintained that using a GPS is an art, not a science. We will cross the Bluewater, no matter what Garmin tries to tell us.

Another thing that I pondered was how the Shell station yesterday stopped my third fill-up by requesting I see the cashier. This is a Shell thing and I, as we travel, avoid multiple Shell stations on the same day. If this policy keeps me away from their pumps, I have to think that it isn't the best from a marketing standpoint.

Near Lake City, Tennessee, we encountered some hard rain. As we slowed to 40 MPH with the four-way flashers on, I reflected that it was better to be behind windshield wipers than out in the wet on the bike. OK, I am getting older. As a few cars blew by us blindly, I also gave some thought to how multi-car pileups happen.

The rain cleared as we approached the Kentucky border at Jellicoe. We coasted down the long hill to the state line and made a pit stop at the Welcome Center. Then we continued on, encountering another stretch of  solid rain near Corbin, Kentucky before breaking free into the bluest skies we had encountered all day.

The Loves truck stop I had chosen did not have a McDonald's and Sandy wanted a fruit smoothie so we stopped instead at a BP station across the road and then parked in a truck lot next to Mickey D's. It was 28 C (83 F) when we got out but felt even warmer. Smoothie, burgers and coffee in hand. we rolled on. 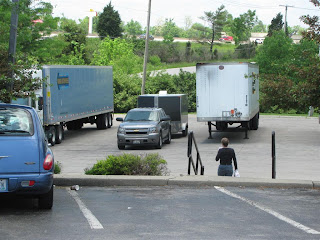 As we traveled north, I considered that I actually enjoy driving motorhomes and towing trailers. Who knew? At 65 MPH with the tow/haul mode engaged, the transmission shifted more aggressively on the hills but wasn't as picky about maintaining the cruise speed. As a result, we got down to 3rd quickly on the grades but it didn't try to go to 2nd when the speed fell off a bit.

Quote from Greg Behrent heard on XM: "When you are around an asshole, it is YOUR responsibility to leave." Oh yes, on the recommendation of Cheap B, I found Tom Petty on XM Channel 111 too. Thanks, Mark. 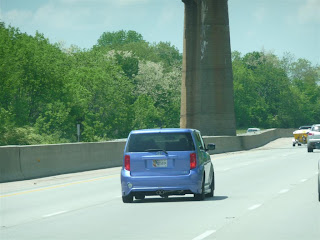 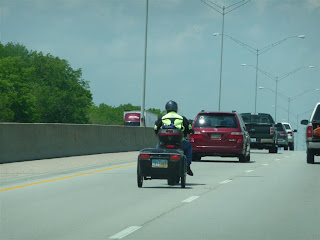 Dropping down the Covington Hill, we crossed the bridge into Ohio and threaded our way through Cincinnati construction and then through more in Dayton. The orange signs and barrels in Dayton have been a factor since the first time I drove through here in 1985. Maybe, some day, they will finish.

After looking at time and distance, I decided we should get through Detroit this evening so we wouldn't have to contend with Monday rush hour traffic in the morning. At a rest area, I called the Comfort Inn in Port Huron that we had stayed at a few years back with Brother Bear, Brad and the ladies. It is a bit more expensive, but is a very nice place. Reservation made, we continued on. By the way, my longstanding bias against pomegranate flavoured 5 Hour Energy drinks has been unfounded. After trying it, I really like it and had one now to keep me going. 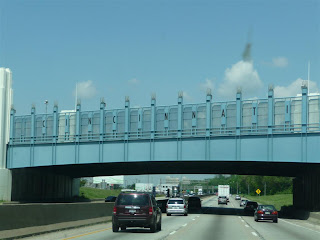 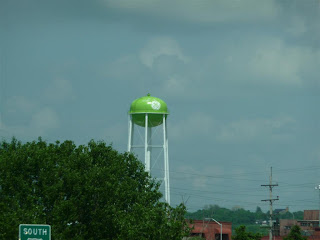 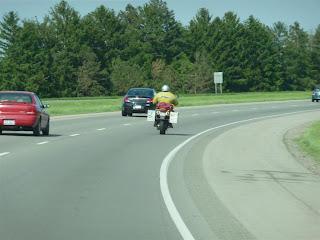 Adventure rider with FYYFF sticker (I had to look it up) 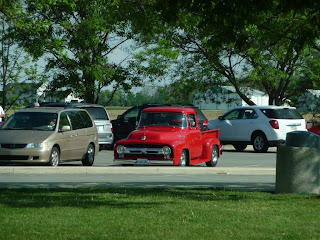 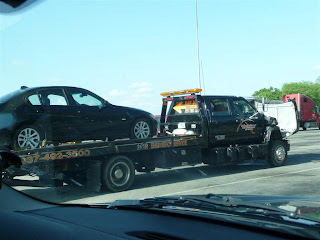 Roll back broken down in rest area 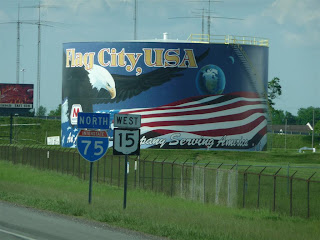 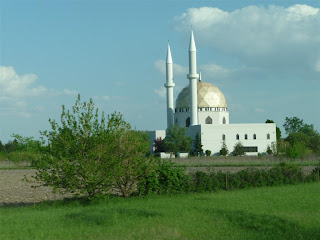 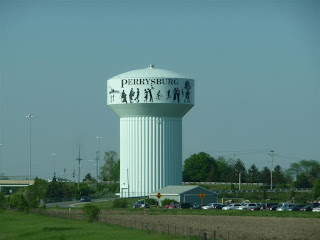 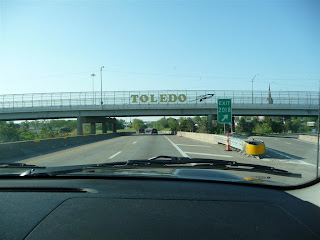 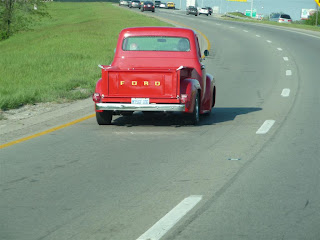 That same F100 passes us

One jolt in Ohio was that the gas prices went from $3.76 in the south to $3.89 in the north. This compared poorly to the $3.25 to $3.59 prices in North Carolina. Ohio can argue that it uses the extra tax money to maintain roads but Michigan, with similar prices, can't make a similar claim. As soon as we crossed the state line, the sharp and incessant bumps began. We stopped for expensive fuel and noted that the temperature had dropped from 29 C to 23 C in a very few miles.

It was back to 28 C as we threaded our way through Detroit on I-75. The signage isn't the best and the GPS proved to be very valuable in this case. Traffic was light as we switched to I-94 and continued on through construction  to Port Huron.

We arrived at the Comfort Inn at 8:38 after covering 664 miles in twelve hours and three minutes. Not bad for a truck towing a humongous trailer. There was a portable sign as we entered town saying that GPS users should tune to 1610 AM. I didn't do so but suspect that it was to tell us that the town had moved the roads without telling Garmin, because where I drove didn't match what the electronic marvel attached to my windshield was telling me.

We got our room on the front side and I parked the truck/trailer in two car spaces. I never thought it would fit but Sandy had better eyes than I did. We met Dave from Orillia who had grown up in Whitefish Falls (near Manitoulin Island) and whose parents had owned the infamous Red Dog Inn there. In our room, I ordered a thin crust Hawaiian from Happy's Pizza (tasty but a bit soggy) and posted the day's photos. Then I went out for a smoke and talked old time snowmobiling with Dave in the parking lot before returning and falling asleep in a very comfortable bed with many even more comfortable pillows. 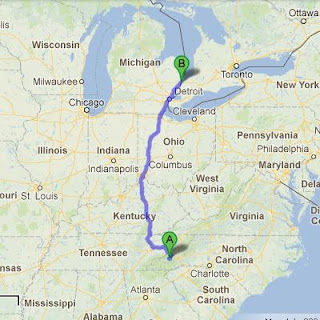