Victoria Day dawned sunny and warm in Port Huron. Victoria Day is a Canadian statutory holiday originally celebrating the birth of Queen Victoria and is now the symbolic natal day of our reigning monarch. Due to a quirk of nature, it always falls on a Monday and is considered the official start of the Canuck summer. This one would also be the last day on the road of this particular trip.

This Comfort Inn had a hot breakfast. Sausage links, eggs and biscuits were on the buffet but we knew we were back in the north because there was no gravy. Sandy opted for raisin bran and yogurt.

We left the lot at 8:30 and, with no help from the confused GPS, followed the road signs to the Bluewater Bridge to Canada. There was no traffic on the bridge and there were absolutely no vehicles in the customs plaza. I pulled into a regular booth and, after a few peremptory questions, we were readmitted to our home and native land. The CBSA agent, in response to a question, told me we could use the NEXUS lane even if we had goods to declare. This is a change from the original rules but is good to know for future crossings. 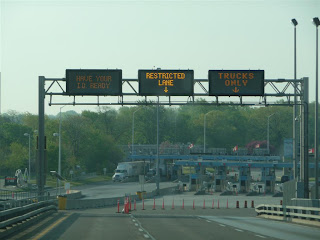 No waiting at the border (for a change)

Highway 402 is almost level but has a distinct slight upgrade going east. Combined with a strong crosswind out of the south and less tree cover than Kansas, it caused drag so I put the truck in 3rd gear and set the cruise for 55 MPH. The interactive mileage readout said we weren't doing well.

I called Heather and Tom to see if they were at home. Tom said they were just on their way out for a bike ride heading for, of all places, Port Huron. Shortly after we got onto Highway 401 in London, we saw them going the other way. Sandy saw them first and we exchanged waves as we passed each other.

We stopped at the new Flying J in Ayr for fuel. The bill stung a bit after getting used to American gas prices. I also got a travel mug full of coffee to keep me sharp. 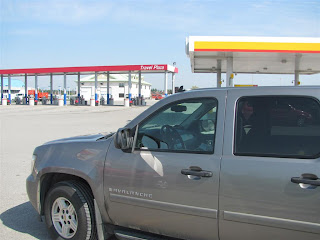 We continued east on the 401, with traffic staring to back up as we approached the Milton/Halton area. I opted to again take the ETR 407 toll road. Vehicles with a gross of 5 tonnes (about 11,000 lbs) require a transponder so this choice was denied us with the motorhome. I don't use this road often enough to justify a transponder. Although the truck/trailer has a combined gross rating of 13,000 pounds, I maintain our actual weight of approximately 9,000 pounds makes me legal. The traffic on the 407 was very light. 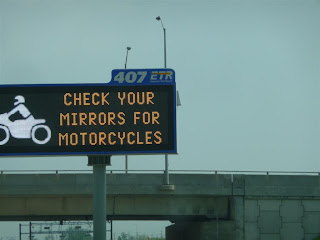 This made me feel all warm and fuzzy

We exited the 407 onto Highway 400 North at 11:30. I had been looking forward to the south wind giving us an assist but it was now blowing out of the east. Not unexpected. As we moved north, the long weekend traffic going back into Toronto was starting to build. This is one reason I am happy to be a northerner. 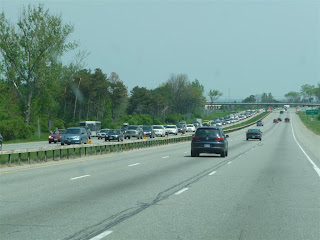 Southbound traffic on the 400

Near the Highway 89 exit, we came up on a police vehicle with someone stopped. In accordance with the law and common courtesy, I moved left to the middle lane. As I went by the cruiser, I was passed on the right by a lady in a Range Rover moving at a good clip. This is how police officers get killed.

Again, north of Moon River, someone was working on a car on the shoulder so I moved to the left. Another lady, this time in an Escape, blew past me on the right. What is the point of having laws regarding safety if they aren't enforced?

We stopped at the Tim Horton's south of Parry Sound for a pit stop. I had some difficulty finding a parking spot and there was no way we were getting food because of the huge line-up of southbound folks. Instead, we continued on to Pointe Au Baril and stopped at the chip stand for fries. I also had a very good hot dog to go.

We were in the home stretch as we ate our fries and crossed the Naiscoot River. Then with just 70 miles to go, traffic ground to a halt. It soon became clear that we had encountered the bane of northern travel, a significant wreck on our two lane highway. Before long, we were all out of our vehicles speculating and socializing. A number of vehicles turned around and then one of the southbound hit another, causing the escape to grind to a halt. Despite rumours of a four hour wait and my recollection that the Sturgeon Bay Road might get us around, we held our ground. After about an hour, we started to move.

At the curve south of Harris Lake Road, we could just see the top of what appeared to be an older southbound Class B RV that had gone off the highway and down an embankment. I have no idea if it went off on its own or was trying to evade a passing northbound vehicle in the curve. 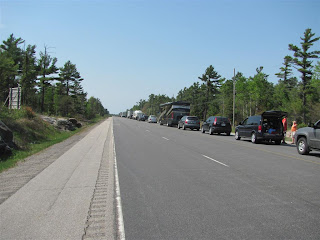 Stopped traffic lined up ahead of us 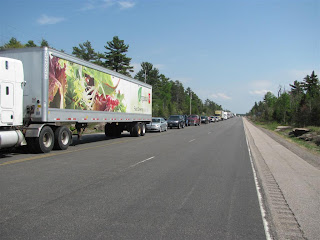 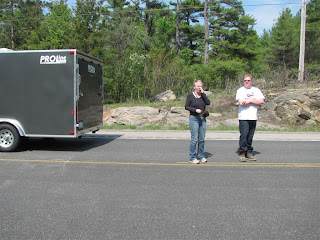 Sandy and a Day truck driver 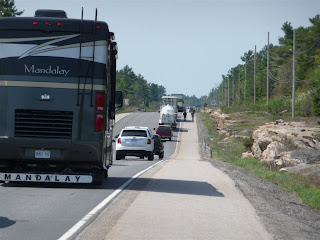 I'm sure the Class A pusher was a comfortable place 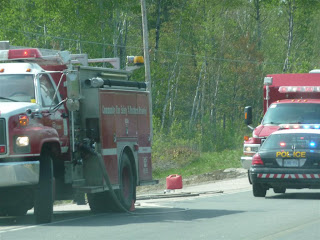 The fire department made it

Once we passed the wreck, we were faced with a very long line of southbound traffic. Some of them had their noses stuck out over the line to peek so I had to be careful with the wide trailer. One load of hay had obviously shifted so I was glad he was stopped when we went by. As we went by the road that was the other end of the detour via Sturgeon Bay, the line of cars that had taken that route were now trapped. They couldn't pull out and turn left due to the steady stream of vehicles moving north. 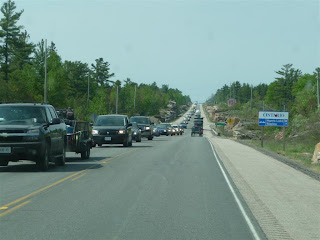 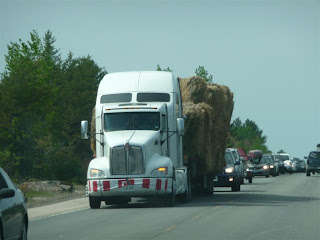 We found the worst hills of the trip north of the Harris Lake turnoff. For the first time in two days, the transmission kept trying to shift down to 2nd gear to maintain speed. Our grades aren't long but some of them are steep.

We encountered solid overcast as we approached Sudbury. The temperature, which had been 29 C in Parry Sound, was now 15. We got to the house at 5:22 PM and were backed in, unhooked and unloaded by 5:45. The grass sure needed mowing. 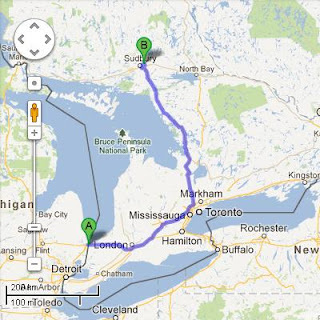