I went to bed so early last night that I woke up at 4:00 AM. I didn't know if Sandy was awake so I waited until 6:00 before I got up. It turns out she was awake too but didn't want to disturb me. We need a signal of some kind. I sorted some photos, then went outside to get my WiFi fix and found Tbone already sitting in front of our room. There wasn't a cloud in the sky and it was much warmer than yesterday. 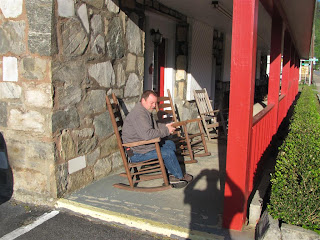 Tbone waiting for us to get up

We rode down to Country Vittles for breakfast. It was less than a mile but I didn't relish the uphill walk after we were done. 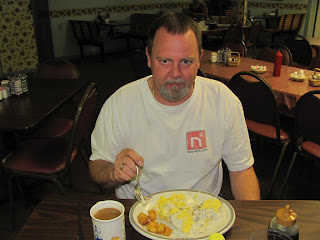 Tbone looking intense as he addresses his breakfast 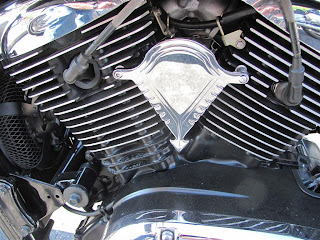 Sandy didn't want to ride today so Tbone and I left about 9:15 to do some exploring. We rode over the tail of the Parkway to US 441 and started north. Just past the park Visitor Center, we encountered two deer. One of them was just standing in the road staring at me so I gave him a few blasts of the Goldwing horn and he and his partner took off leaping through the tall grass.

We managed to ride all the way to Newfound Gap at the top of the ridge where Tennessee begins without getting behind a car until the last half  mile. We pulled into the parking lot where I talked to a gentleman on a new Wing who had just retired and was returning to Hickory from visiting his son in Knoxville. He wanted to know if he was still on 441 since there were no signs. I assured him he would get to Cherokee if he just kept going. There was also a caravan of vehicles towing teardrop trailers, which made me think of Malachi. 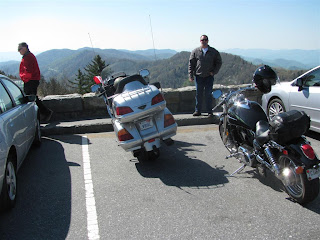 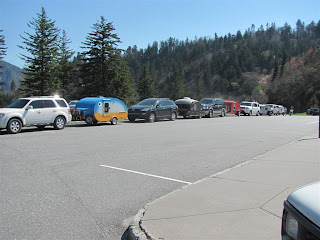 From Newfound Gap, we took the seven mile ride up to Clingman's Dome, the highest spot in the Great Smokey Mountains National Park. They were mowing along the road and throwing cuttings onto the pavement. I don't know why they don't blow the grass the other way. Actually, we were 1/2 mile shy of the actual Dome since I didn't want to walk the rest of the way up the steep path. Strangely, we were serenaded by bagpipe tunes. 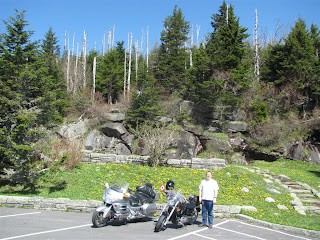 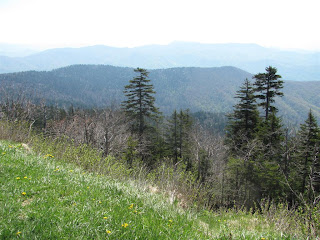 Looking out from the lot 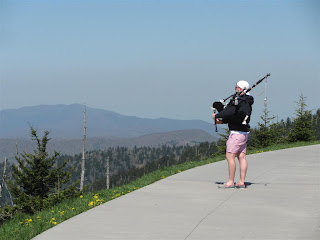 The last thing I expected to see up here 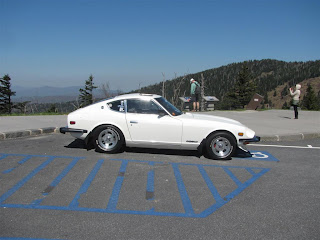 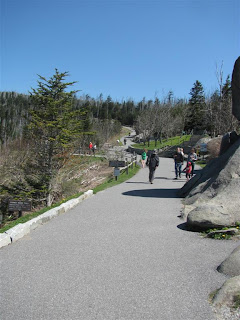 The path to the Dome (steeper than it looks here)

Riding down from the Dome to 441, we got behind a young couple in a Cobalt. They were moving slowly and passed several pullouts so I got a little obnoxious. Then we dropped back and charged up behind them, at which point they moved over. The Chrysler ahead of them ducked as soon as they were able and we had an unrestricted run the rest of the way.

Heading back towards Cherokee, we were again behind vehicles but the Ford Escape in front, although he rode his brakes a lot, kept up comfortable 45-50 MPH pace. The Yukon behind him knew how to downshift and we hardly ever saw his brake lights.

We stopped in Cherokee for fuel and then followed 441 to Sylva, where we made a pit stop at a Shell station. Then we rode on down 107 looking for the Cullowhee Mountain Road. We found it and it was everything the local couple had said. Paved all the way, it went up and up and up. The track was narrow and the curves  were tight but nothing too difficult except for about four 180 degree switchbacks on severe upgrades. In the last one, neither Tbone nor I was able to hold our own lane. This made me think of Wolf Pen Gap on steroids. I wouldn't send a novice rider up this road where the speed limit was 25 MPH and the corners were posted at 10. By the time we got to the top, the Wing temperature gauge was pushing the red.

At the crest of the ridge, we found a quaint little church and a graveyard. We stopped for a smoke before heading on. The bike temperature had returned to normal when I started back up again. I would really like to know what that gauge is actually connected to, because this makes no sense. 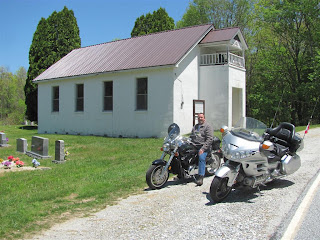 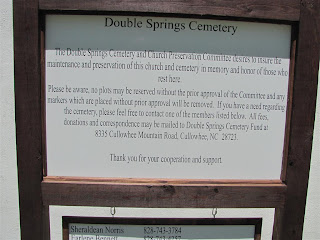 Even dying has rules 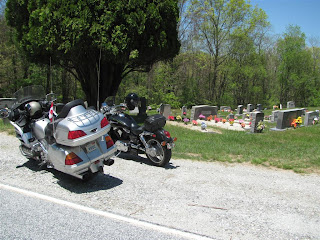 We continued on past farmland at 4,000 feet and a Christmas tree farm on a 45 degree slope. As predicted, we arrived at a stop sign at a T intersection and had to decide whether to continue riding the mountain roads south to 64 or cut over to 107. We opted for the latter and took Pine Creek Road east past the Thorpe Reservoir. I slid a bit in one corner on fresh tar and was more careful until we reached better pavement.

Highway 107 was two lane at this point and we followed it south to Cashiers where we turned east on 64. I have ridden this every year but didn't remember as many curves as we encountered. Traffic was a bit heavier as we passed many fine looking golf courses. Some day, I will bring the sticks and play down here.

We finally arrived at the Citgo station where we waited out the hail storm two years ago. We had lunch of crackers and Slim Jims. The older lady behind the tire suggested that maybe it was time for Tbone to get a new front tire. We pointed out that we weren't riding much on the centre of the tread. Still, there wasn't much skin left. 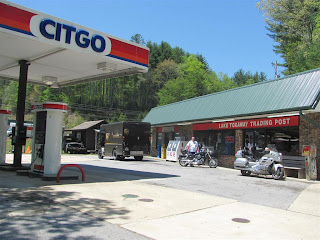 Our regular  stop on Highway 64

From the Citgo, it was a short ride to Highway 215 where we turned north towards the Parkway. We left the traffic behind and had the road pretty much to ourselves as we wound our way to the top of the ridge.  We followed the BRP south, stopping at the highest point for a photo op. There, we met two riders from Texas, one on a 99 Nomad with 120,000 miles on it. They were continuing on towards Gatlinburg. 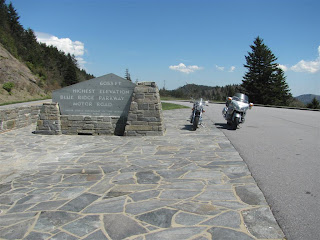 The usual photo at the highest point on the Parkway 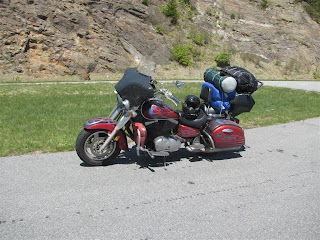 From there, we continued on to Soco Gap and down into Maggie Valley, arriving just after four PM. We had covered 182 miles, about five of which had been upright. But it was the kind of ride that brings me down here time and time again. I hadn't really been in the groove today and had to work at the curves, but the groove is elusive and the more you look for it, the less you find it. Maybe tomorrow.

We found when we got back that Neppy and his wife had arrived from Central Pennsylvania and Mikey pulled in soon after. 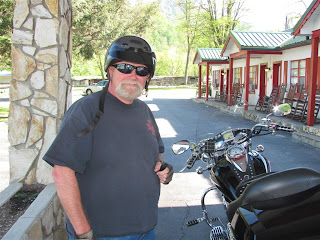 About 5:30, we all headed back down to the Rendezvous for supper. They set a table for eight in the otherwise empty dining room. Stephanie was off and the server today wasn't in the same class. Good but not great. Tbone got mushroom caps for the table and he and Sandy had salads. I had a clubhouse sandwich with (you guessed it) more mushroom caps.

Blondy called while we were eating and I told her where to find us. She drove her new Ford Escape up from Alabama. She is looking really slim in a good way. 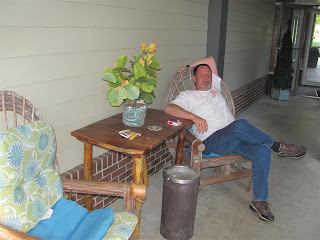 Tbone relaxing outside the restaurant 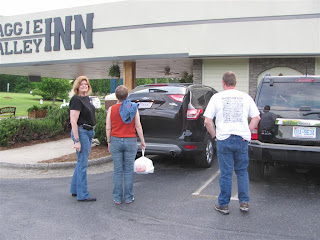 Blondy and her new Escape

Back at the motel, we hung out visiting until 11:00 PM, when everyone turned in. 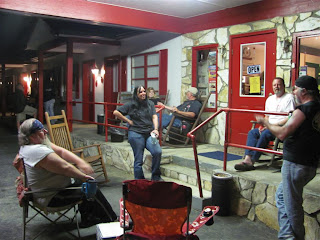 Under the awning at the Applecover 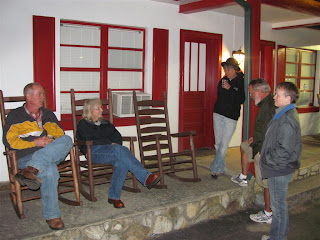 I am way behind on the blogging and there were requests for photos, so I changed the protocol and started posting previews of each with just the photos and maps. I will get around to adding the story as soon as I can.