It was a cool morning and Tbone found ice on the seat of his bike. We walked up to Joey's Pancake House for breakfast where I had two pancakes, scrambled eggs and country ham. The server asked me several times if I knew that country ham was salty and I assured her I knew exactly what I was ordering. Afterwards we walked back down to the motel as the day started to warm up. 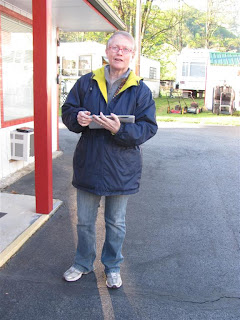 A warm jacket on a cool morning 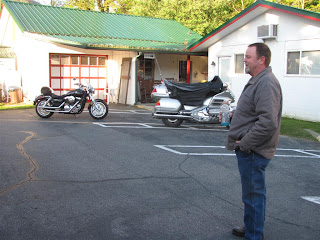 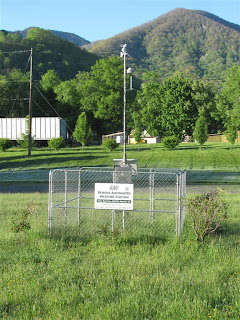 We have our own weather station (sort of) 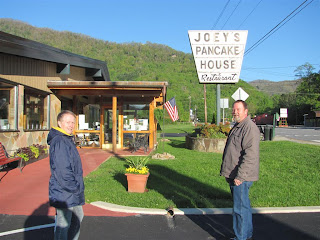 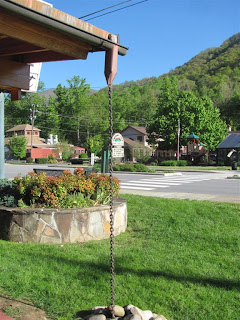 We hung around the motel for a while and talked to manager Billy about all the motels and restaurants that are either closed or for sale in Maggie Valley. Business is not doing well here but he is hustling and even persuaded the Can-Am Spyder group to stay here a few weeks from now. He has the place looking pretty good. 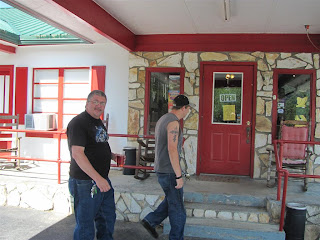 Billy and his son James

After a bit, I was itching to do some of riding so we got on the bikes and headed for the Dairy Queen in Cherokee. We rode up US 19 to Soco Gap and down the other side, a road involving multiple downhill 35 MPH curves. I was feeling pretty good in the lead and we got about 2/3rds of the way down before we caught up to some slow moving cars. The lead vehicle was still doing 10 MPH under the limit after he got to the straight and level so, figuring there was no hope for him, we passed and put him in our rear view mirrors.

The DQ now has a lunch special for $5.00. A chili cheese dog or chicken strips, fries, a drink and a sundae. Sandy and I split the chicken strips. I ate most of the fries and she got the sundae. That was an inexpensive meal. We rode back to Maggie Valley over the Blue Ridge Parkway with nothing ahead of us. 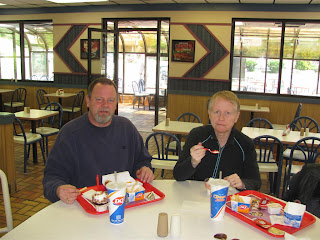 Tbone and Sandy in the Cherokee DQ

Back in Maggie, we went to check out the used bookstore that we had seen a sign for at the south end of town. A mile up a nice little side road, we found it at the bottom of a steep driveway. I believe Mary when she says she has 200,000 books, but they are in a building that would comfortable house a much smaller quantity. On the plus side, Sandy was looking for Ann Rule true crime books and Mary led her right to them. She picked up four and I got four science fiction books. As well, Mary has written a book called The Moonshiner's Daughter about growing up in the mountains here and we got a copy of that. 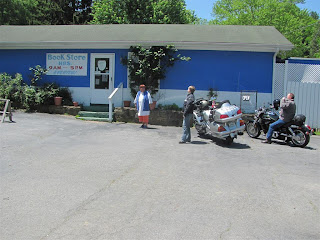 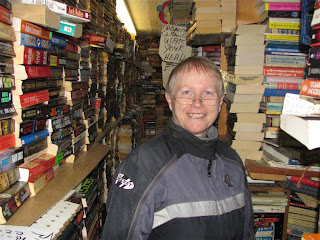 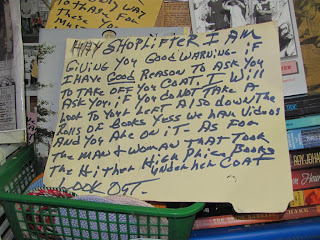 There were dire warnings about getting back up the driveway onto the road. Apparently quite a few have dumped their bike trying to get out and Mary's son said the last mishap involved people from Ontario. The exit involved a steep run up to the level road but it was blind. You can't see if anything is coming from the bottom. Sandy walked up and waved us up when the coast was clear. Easy-peasy, as Jolene would say.

We stopped at a couple of leather shops looking for a new vest to get Freedom Riders patches sewn on. There were lots for $29.95 but they had jacket cut shoulders and didn't fit well. I needed a narrow shoulder and found one at the Leather House. I didn't realize until I reached the cash that this one was $79.99. Trust me to have expensive taste. Oh well, it will be here when Carlene and the sewing machine arrive. A bonus is that it even has a special pocket for carrying my handgun. If I had one.

Back at the motel, it was getting positively warm. Tbone got comfortable and I got a picture that I posted on Facebook, garnering all manner of comments about chicken legs and such. Charlie and Christie arrived from Alabama on their new Harley soon after we got in. I did my best to catch up on some blogging before supper. 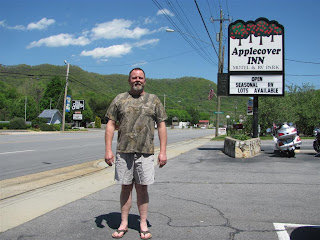 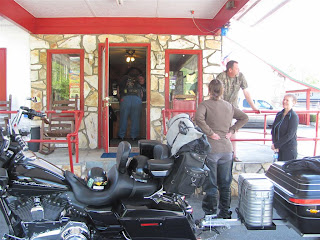 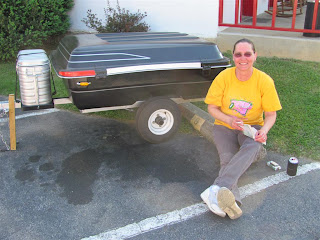 Christie relaxing with a book

We were getting hungry so we took the truck down to the Rendezvous restaurant. Our favourite Garlic Knots had closed up but we found this place had gotten their pizza ovens, recipes and owner/chef. Stephanie was our server and was excellent. We had some of the best mushroom caps I have ever eaten, salad and lasagna. The only drawback was that they were out of romaine lettuce so a Caesar salad wasn't an option. The Chev HHR crowd, gathering this weekend as well, will be having a 50's party here on Saturday night and Stef tells us all the servers will be wearing poodle skirts and such. Sounds like fun. 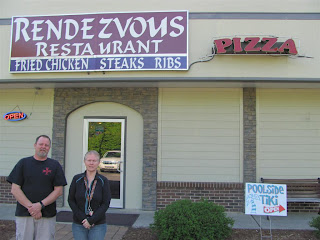 A good place to eat 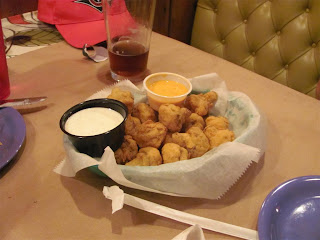 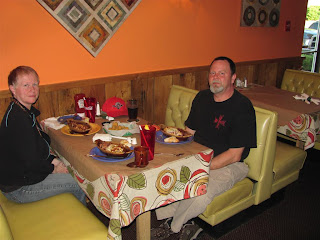 Sandy and Tbone chowing down 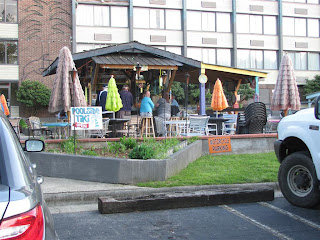 They even have a Tiki bar

We returned  to the motel and hung around outside for a while. A local couple at supper had told us about what he called the Spillwell Road, a challenging ride south of Sylva. I used Google Maps and found it was actually a road through Speedwell called the Cullowhee Mountain Road and marked it for tomorrow.

After we went in, I sorted pictures and transcribed blog notes for a while. I felt bad that I was behind on the blogging since I know many are waiting for photos. I'll see what I can do tomorrow to get something posted. I then read about four pages of one of the books I had gotten before falling asleep.