Each year, the Freedom Riders Motorcycle Association of Northern Ontario, Inc. (known usually simply as the Freedom Riders) holds a Memorial Run to remember fallen members and, more generally, all friends and family who are no longer with us. For the last few years, this has been held on the last Saturday in May.

This Saturday morning dawned clear, sunny and cold. It was just above freezing in New Sudbury and word was that it was below that mark in the Valley. Sandy and I donned several layers to hold in the warmth and then I went out to check the bike tires. The pressures were last set at 3,500 feet elevation and 70 F in Maggie Valley. The current 1,200 above seal level and forty degree cooler temperature resulted in tires that were six PSI low. The new air pump fixed that in short order.

Leo arrived as I was airing the tires and we managed to get under way at the planned 7:50 AM to make the meeting time of 8:30 across town at Fielding Memorial Park. 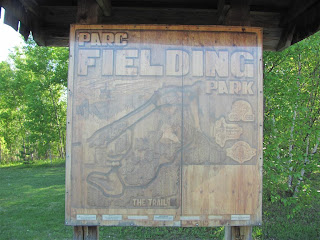 Last year, we were the first to arrive at the park. This time, although we were actually earlier, there was a good crowd already assembled. Many were on bikes but a few arrived in cars or trucks. The nature of this gathering meant that it didn't matter how a person got there as long as they attended. 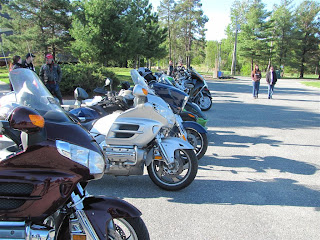 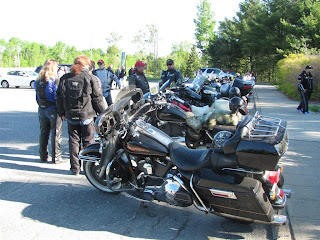 Before we got down to the main purpose of our gathering, it was time for a pleasant task. The Freedom Riders usually generates a surplus of cash from our annual Freedom Rally. In accordance with our bylaws, the membership from time to time decides to donate a portion of this surplus to a local children's charitable cause. For the third consecutive year, we were about to present a cheque for $1,100 to the Canadian Diabetes Association to send a local underprivileged diabetic child to Camp Huronda near Huntsville.. 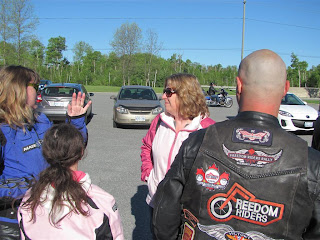 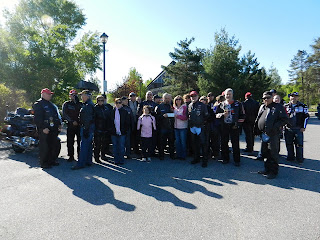 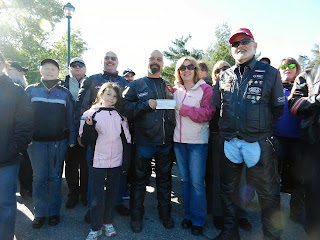 Cheque presentation complete, we moved towards the edge of the adjacent pond for the memorial service. Last year, we held it by a tree planted in memory of founding member Alex Ogilvy. Unfortunately, the tree did not survive the year so, while we plan how to replace the tree, we had to make due with what was available this morning. 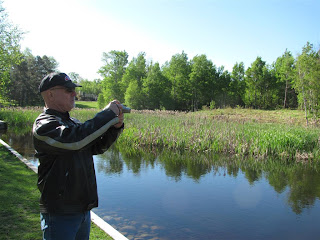 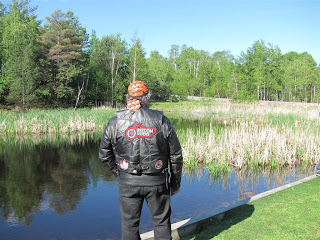 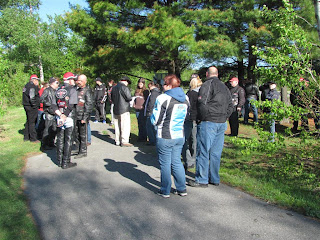 Gathering for the memorial service

Father Jolicoeur, a local priest who does a lot with the motorcycling community, had once again graciously agreed to conduct the memorial. He arrived in his Smart Car and was introduced by Nepper, our VP. His words were simple but heart felt as he spoke of our feelings for people who are no longer with us. In closing, he blessed us and our bikes. Although I don't believe, I never turn down a sincere blessing. 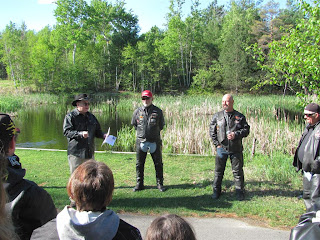 Once the memorial itself was done, it was time for the second part of the memorial tradition. Food. We  had a reservation for a pre-arranged buffet at Mr. J's Roadhouse in Lively. It was only a couple of miles but we managed to get there several different ways. All of them involved road construction. 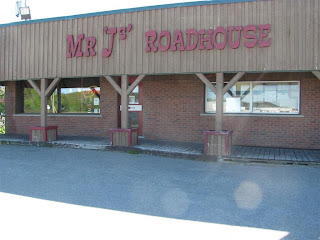 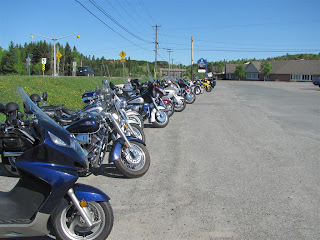 The steeds waiting outside

The back section of the restaurant was set up for us when we arrived. There were just enough places to accommodate the crowd, which numbered about thirty hardy souls. Unfortunately, we were almost an hour early so the buffet was not set out yet. You can't blame the establishment for the unexpected. Coffee and tea were brought straight away as we relaxed and waited for the food to be brought out. 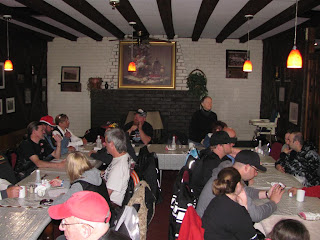 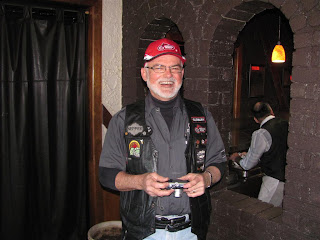 VP Nepper and his trusty camera

When the food trays were brought out, it was worth waiting for. Breakfast included perogies & sour cream, hash brown potatoes, scalloped potatoes, large sausages, bacon, ham, french toast and pancakes. Additionally, since this was technically a brunch, there was a beef dish and  a lasagna. It wasn't a good place for someone on a diet to be. Lucky for me, I haven't been too serious about the diet lately. 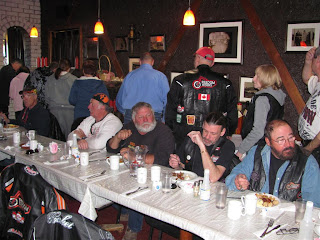 With the dining behind us, our trusty VP Nepper took charge of the ride. He led with President Rob riding second while Leo and I guarded the rear. The sixteen bikes held a good staggered formation as we headed out Municipal Road 55 towards Manitoulin Island. I would have included photos of the actual ride but Sandy forgot her camera at home.

The ride to Espanola was uneventful. We stopped at the Tim Horton's on the south side of town for a quick break. At this point, Sandy and I decided we wouldn't continue on to Manitoulin Island because of some work that needed to be done at home and so we bid farewell to the others and headed back to Sudbury. 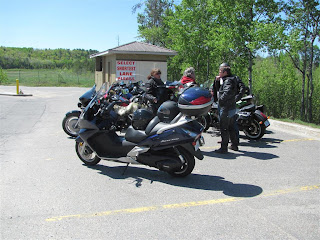 Stop at Tim''s in Espanola 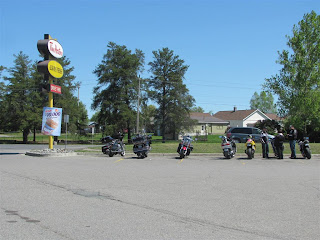 On our way back into town, we decided to put in an appearance at North Star Recreation, our local Honda/Kawasaki dealer. The Honda demo bikes were here today, including the new 700 and the F6B. There was a group heading out just as we got there so we waved goodbye to them. Owner Dave Bimm directed me to the coffee machine and we talked to a few people while I drank mine. 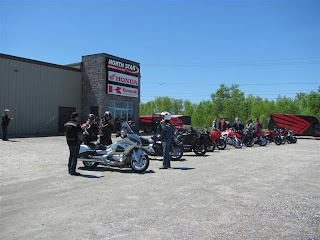 From North Star, we returned to the house and put the bike away. I used Kawachem cleaner to remove a large number of red spatters which were recently bugs from the windshield and fairing. Some day soon I will break open one of the new Kawasaki cleaning kits I won and give the bike a good going over.

The main task for the rest of the afternoon was mowing. I had mowed our yard and that of our neighbor the day we left for North Carolina. After we got back, it rained all week and the grass had grown like weeds. So had the weeds. I fired  up the mower and got to work. Despite having the mower set on the highest level, I had to unload the grass bag about four times more often than usual. Although I wasn't able to finish the back because the ground was still wet, I got a good start on the job. I will get the rest tomorrow or the next day. 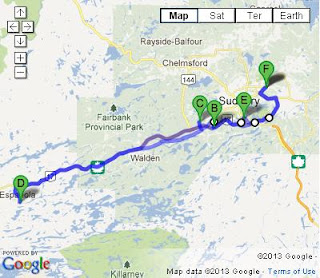