Woodstock/Cambridge Ontario - A Movie and a Birthday

I was awake at 6:00 AM. The grandkids and Sandy were still sleeping peacefully so I waited for them to wake up on their own. Sandy was up first and then the kids started to stir a little after 8:30. Everyone got dressed and we went down to the hotel lobby for breakfast. The hot fare today was scrambled eggs, bacon and sausage links, which suited me fine.

The hotel had one of those waffle makers. I have avoided these after an unfortunate experience years ago but Jasper and Fiona wanted waffles, so I gave it a try. After carefully reading the directions, I went ahead with what looked like an idiot proof system. Instead of a golden fluffy waffle, I ended up with a thin gooey mess. I tried again and got more of the same. The kids ended up with cereal instead. I didn't say anything about the waffle disaster because I thought the deficiency was in my technique. Talked to a nice couple from Bracebridge at the nest table. They couldn't make a waffle, either. I found out later that the batter mix was way too thin.

Jasper and Fiona were as good as gold the whole time they were with us. After breakfast, Jasper and I played a game of chess. Not bad for a five year old. Heather arrived about 10:00 AM and we decided to take the kids to see Dolittle at the movie theatre downtown.

The show started at 1:00 so we drove downtown and parked a little early. That left us waiting in the street for a bit since the cinema didn't open it's doors until 12:30. 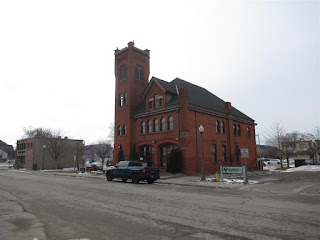 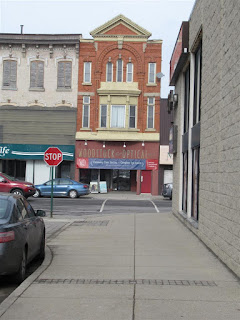 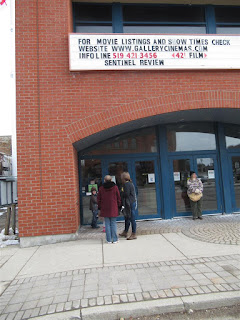 Waiting for the theatre to open 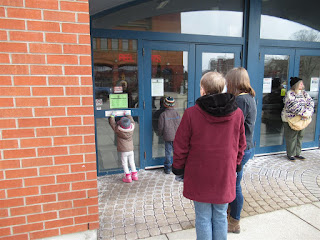 Noses to the glass

The movie was OK. It had a very distinguished cast providing voices for the animals, while our grandchildren provided the running commentary in their own voices. After the show was over, we picked up lunch at Tim's and took it home. Then Sandy and I went back to the hotel room where I worked on the overdue October blog posts for a while.

Mike had come up with the idea that Sandy and I take Heather and Kim out for a birthday supper alone. They had decided we should go to the Cambridge Mill. This was a very upscale place beside the Grand River in Galt. We had a reservation for 6:45.

The snow, which had started falling in the afternoon, was starting to accumulate so the shoes were switched for boots. We picked up Heather and headed for Cambridge on what was becoming a slick highway. It was no problem as long as one remembered to take it easy. Most did. We picked up Kim and got to the restaurant just in time.

The food was good, the prices were high and the service was absolutely stellar. The staff here knew how to treat the guests. Our server, Allison, made all of us feel like we were the most important people in the world. Everyone passing by kept an eye on every table and made sure plates were cleaned away and coffee cups were filled. I had a chicken concoction crusted with Parmesan cheese combined with roasted mushrooms. It was very tasty. Kim had oysters followed by tenderloin while Heather had fish. Sandy settled for a pizza. For dessert, they brought the girls complimentary birthday trifle and then they had something I just could not bring myself to look at. I could not afford to eat here regularly, but once in a while on special occasions would be nice. 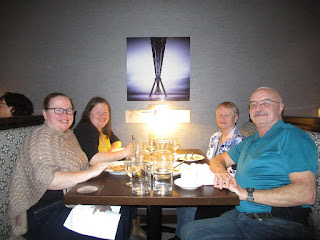 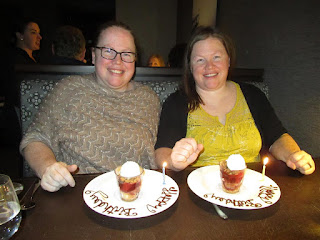 After supper, we dropped Kim at home and gingerly made our way back down the 401 to Woodstock. We only saw one car in the ditch the whole way. After dropping Heather at home, we got back to the hotel about 10:00 PM. I was going to hit the exercise room but decided I was too tired. 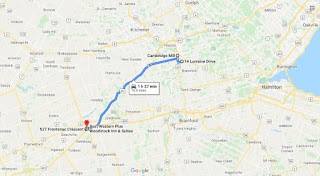