Beckley West Virginia - Back Of The Dragon

The skies were clear this morning. The forecast was calling for 80F and thunderstorms but the radar suggested that they would be mostly to the north and only barely touch Beckley. Our plan to ride south looked good. I finished my posting from last night an wandered over to the breakfast nook for some biscuits and gravy.

Once fed, I unloaded the Wing from the trailer. Since there still wasn't any sign of anyone else, I wiped some of the dirt and a few of the bugs off, but don't tell anyone. I talked to a Harley trike guy from Florida and he suggested that the road northeast to Babcock State Park was worth checking out. I filed this for future reference. Gary unloaded his VTX and we hit the road about 9:45. 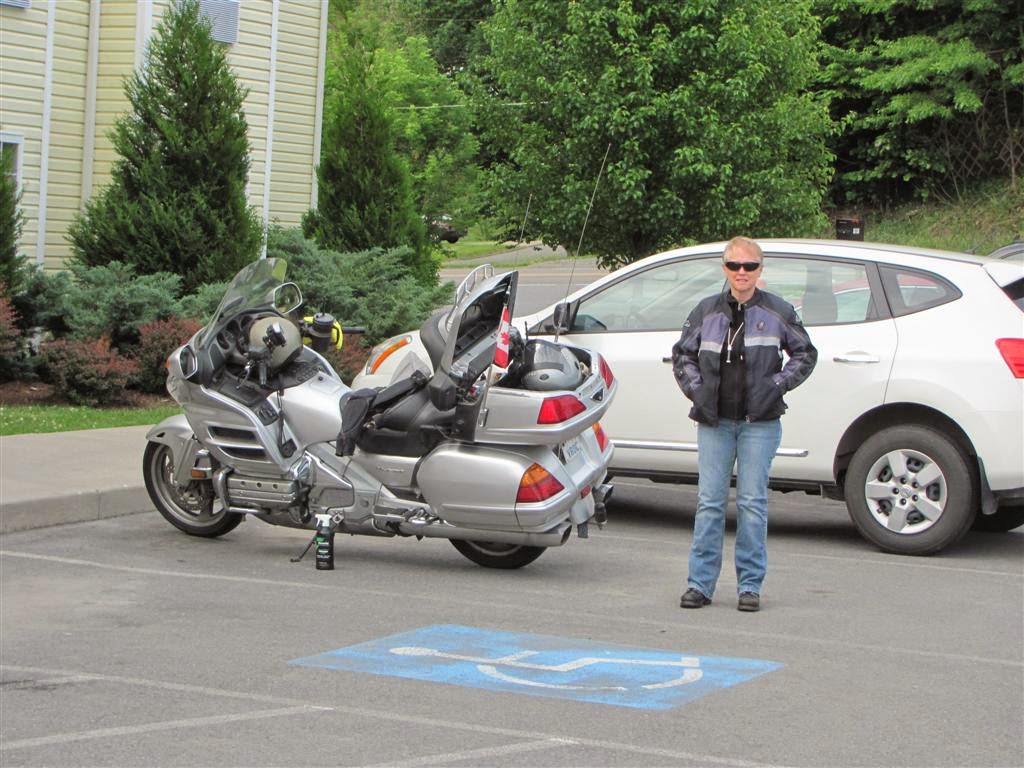 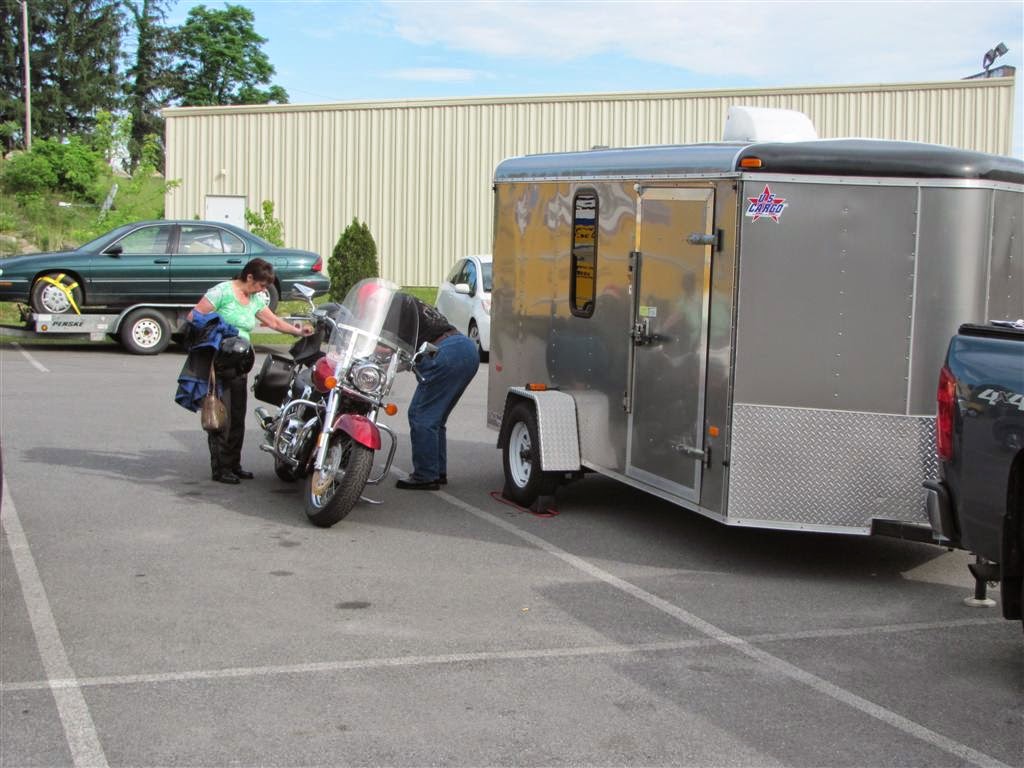 Sandy and I had never traveled US 19 between Beckley and Princeton. It pretty much parallels I-77 through some mountainous terrain, especially the large southbound downgrade to Camp Creek. The first part out of Beckley was through a lightly built up area but south of Ghent there were no buildings and, more important, no traffic. Gary had never ridden this type of road so I set an easy pace. This was a great road to ride and I would recommend it. US 19 near Camp Creek

We stopped at a McDonald's in Princeton to use the facilities and see how the new mountain riders were doing. Dianne doesn't like heights and wasn't too sure about how she liked twisty mountain roads, but we decided to push on. We stayed on US 19 through Bluefield and on to Tazewell, Virginia even though the GPS tried to suggest (or demand) a different route. The gas prices dropped from $3.69 to $3.36 as soon as we crossed the state line. 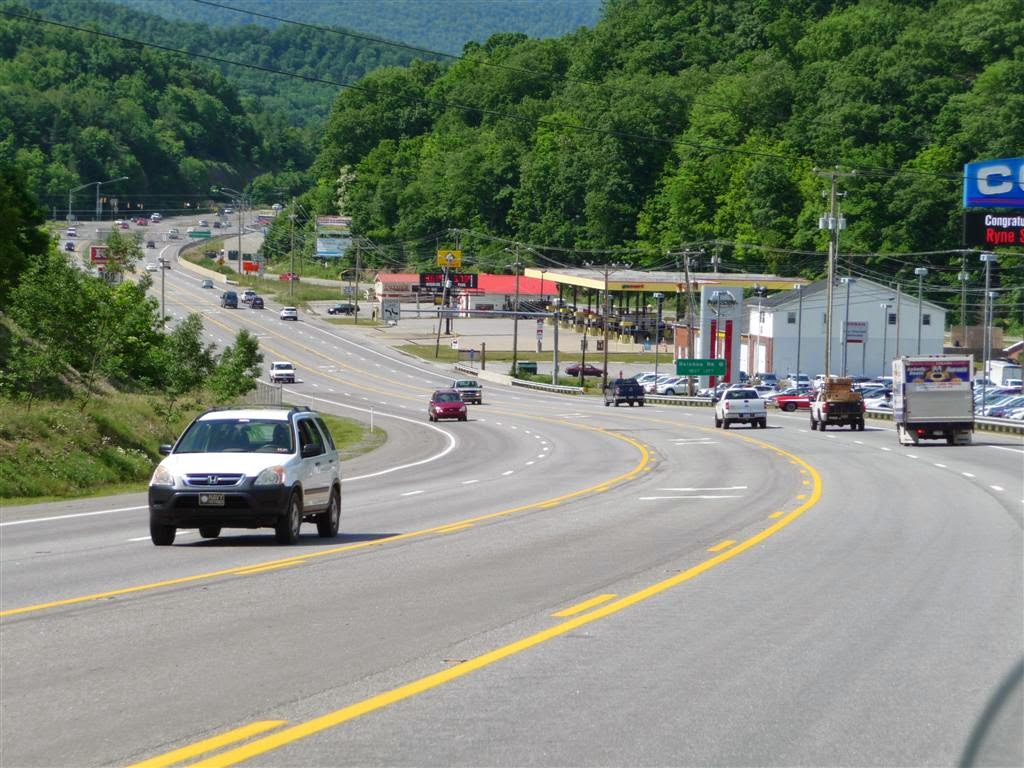 US 19 near Bluefield WV 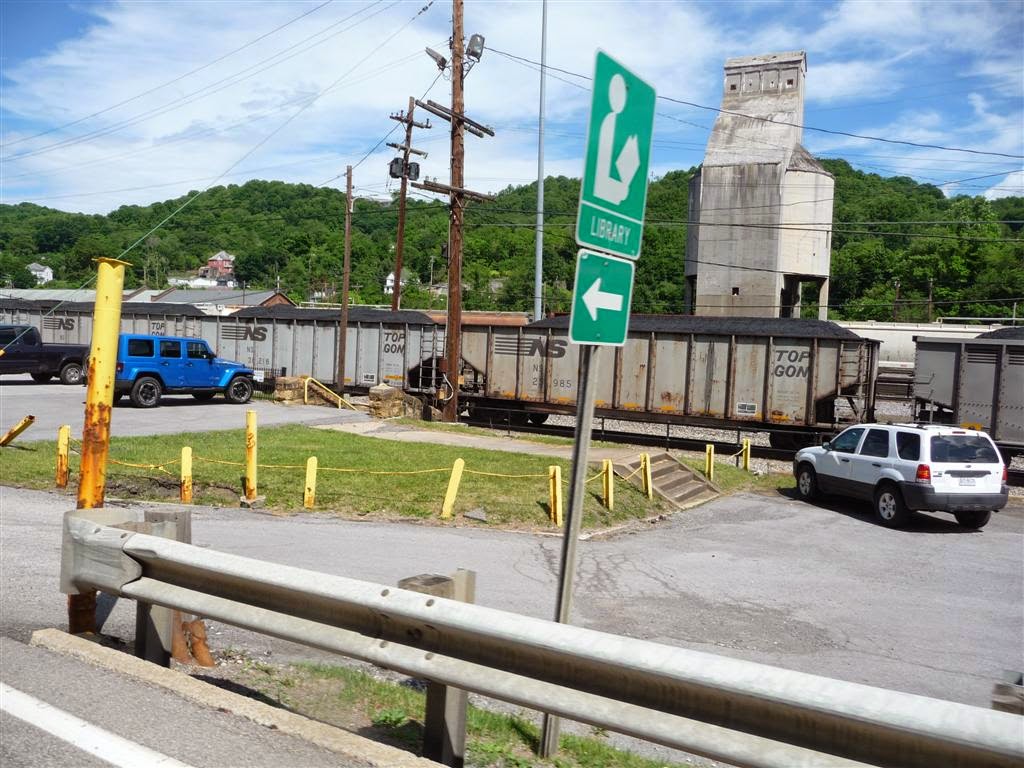 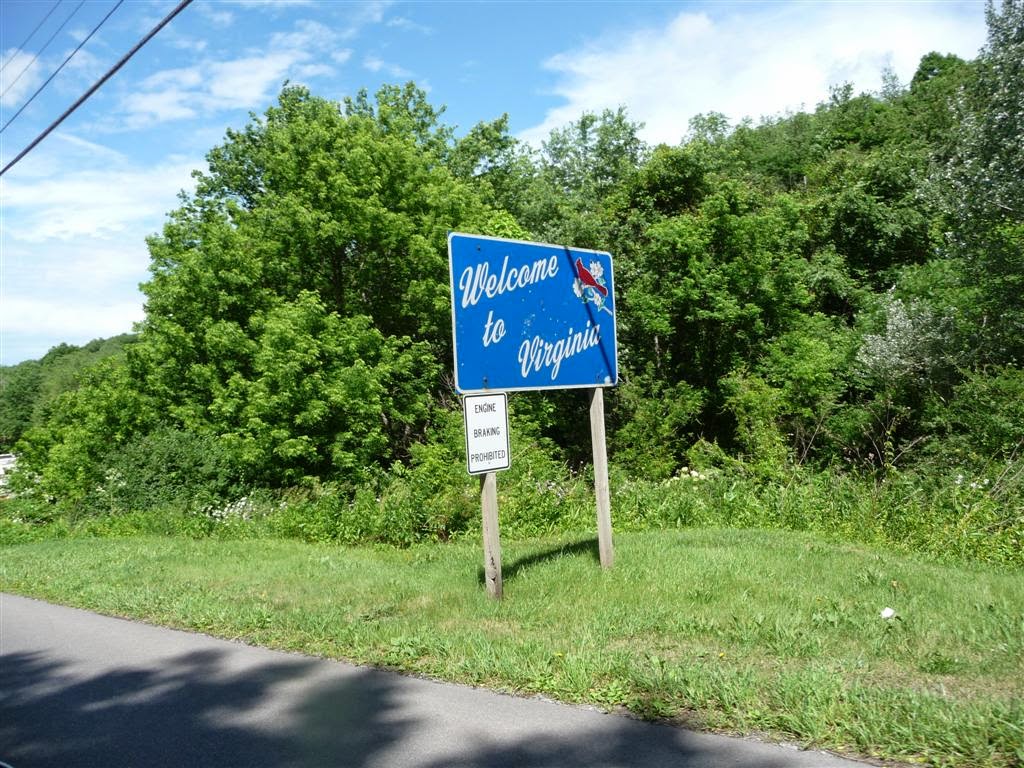 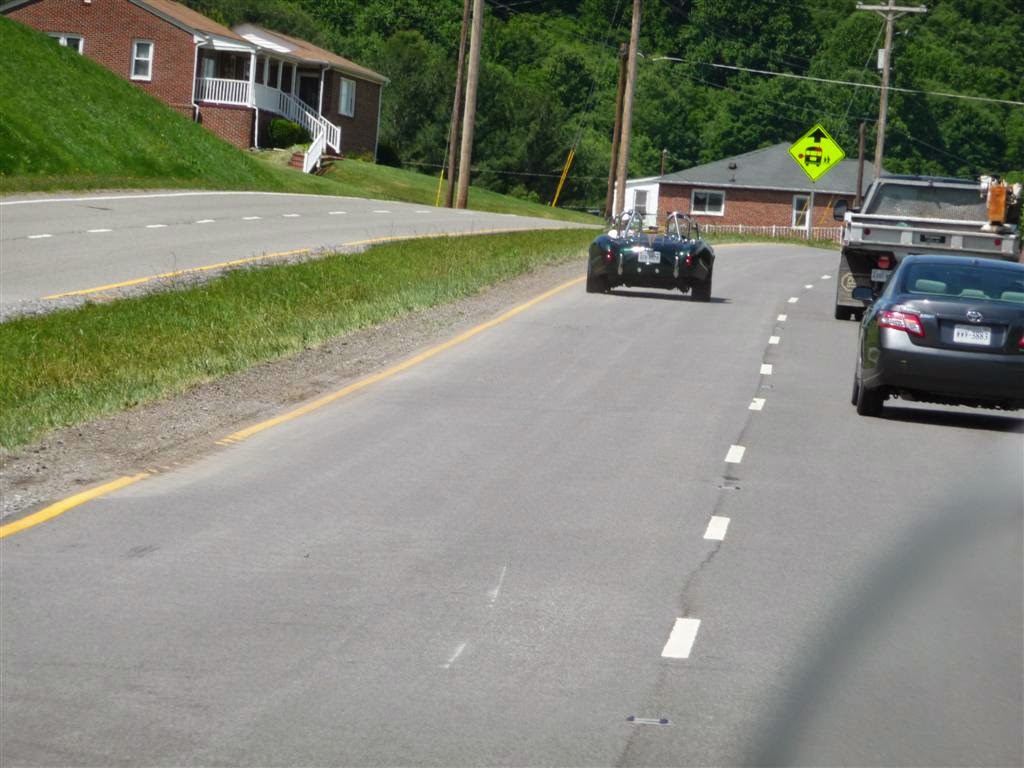 A Cobra or replica passed us

Approaching Tazewell, we took an exit and followed the business route through town. There were red and black markings painted on the road. I didn't realize until later that these were the Back Of The Dragon logos. The local powers-that-be are certainly promoting this as a motorcycle destination to rival North Carolina.

We turned south on Virginia 16 and started down the BOTD. The mountains run from northeast to southwest and so any highway traveling this direction is in a valley and is relatively benign. But try to travel south or southeast and you have to climb.  Highway 16 to Marion crosses three ridges following old tote roads that have been used since the horse and wagon days. These are very twisty in some places. I like twisty when there is a rhythm to it, but am not a real fan of first gear cornering. Still, most of it was very nice. The third ridge peaked at the Hungry Mother State Park overlook. 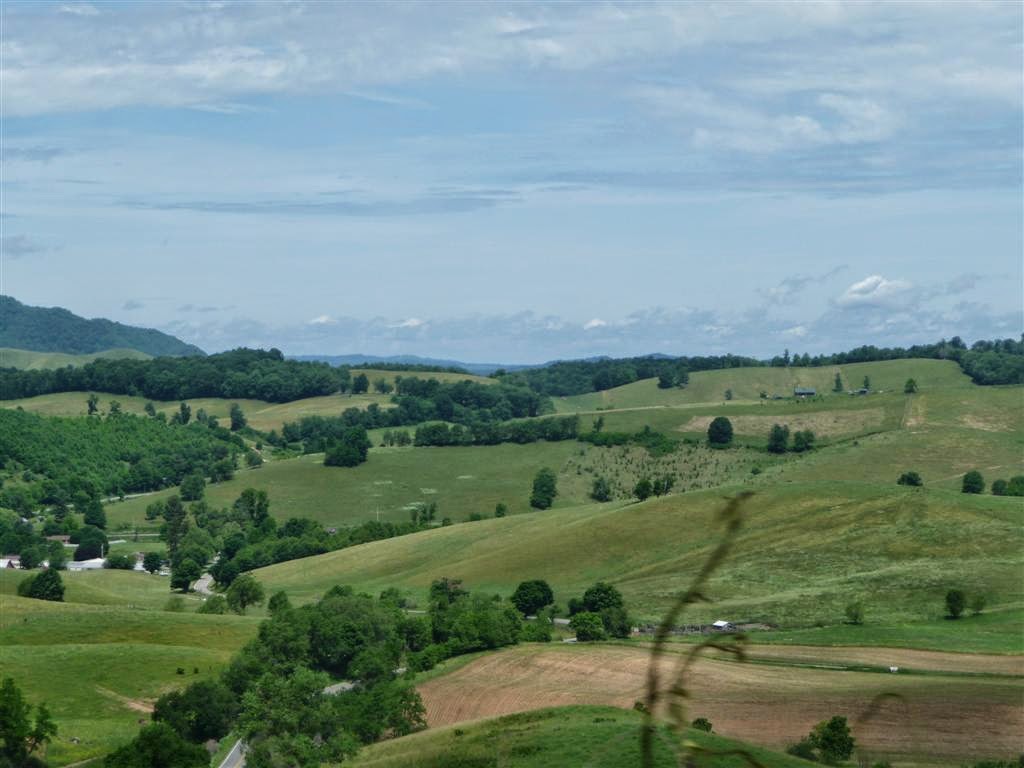 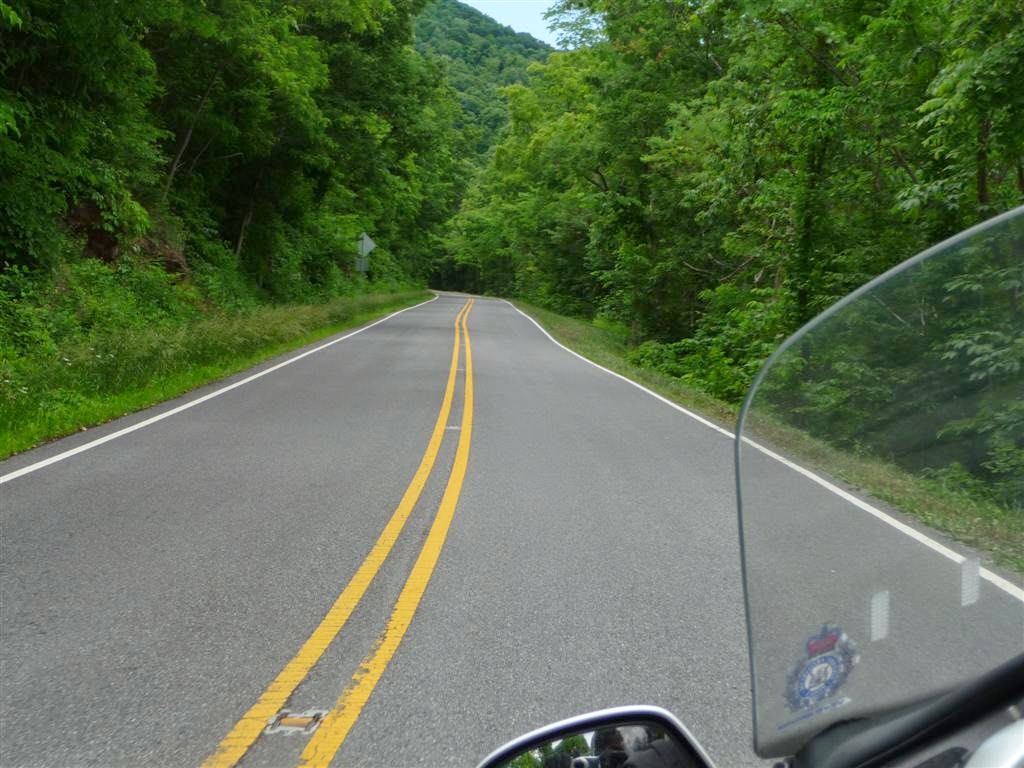 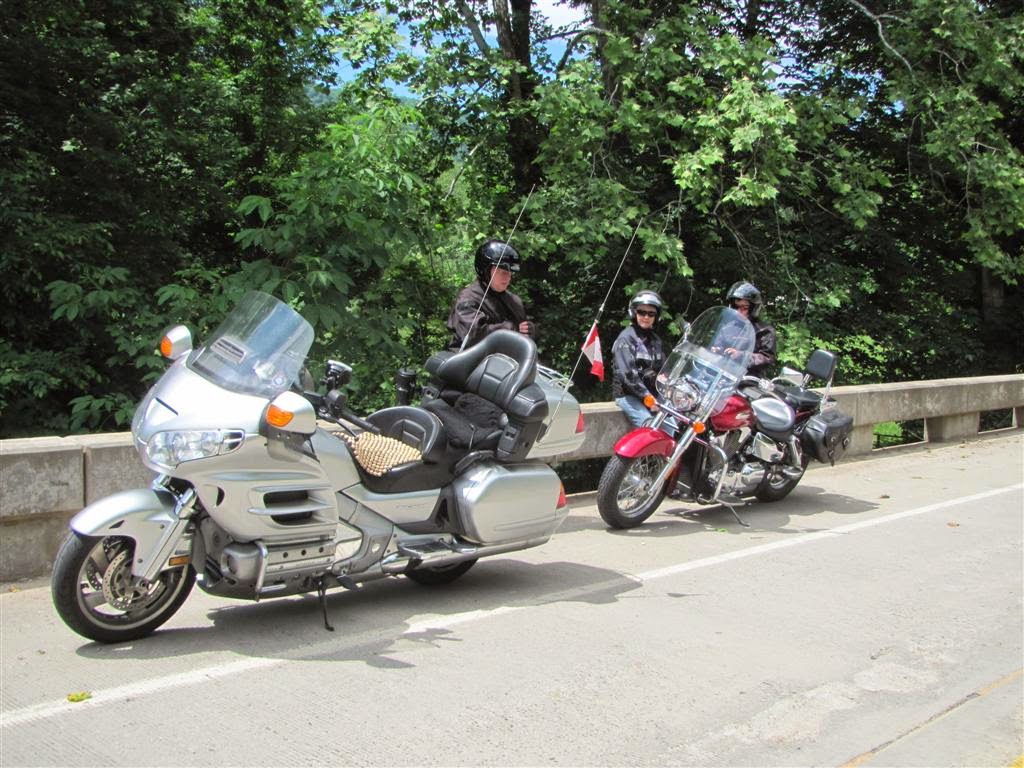 Stopping after the first ridge to check out the riders 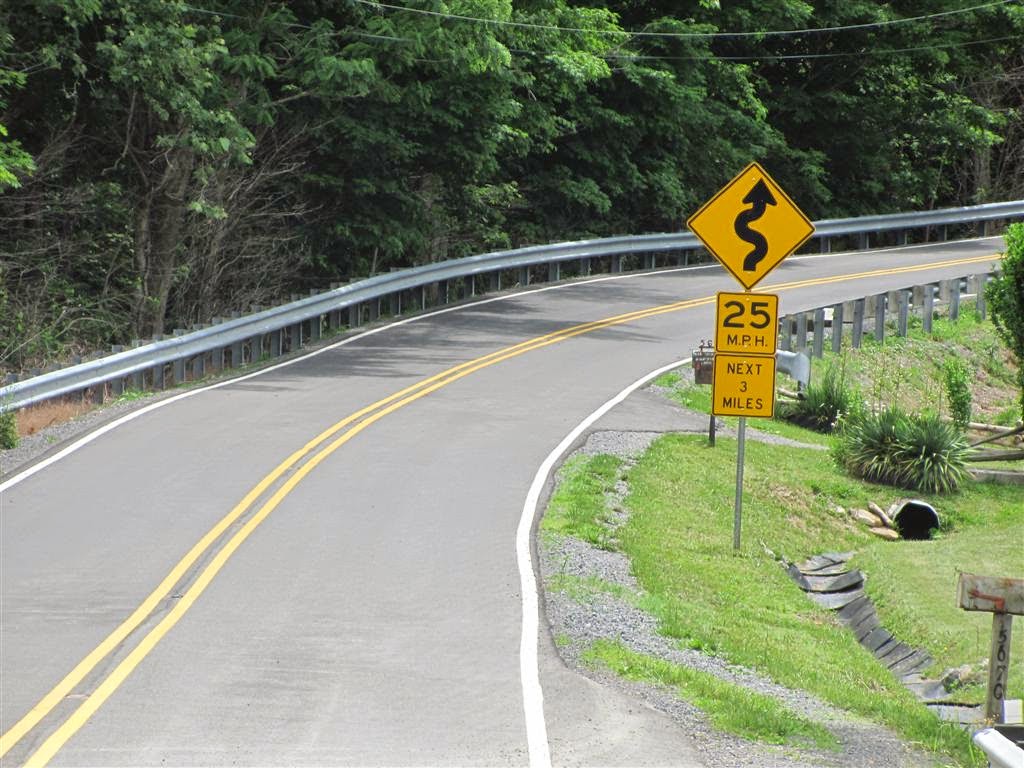 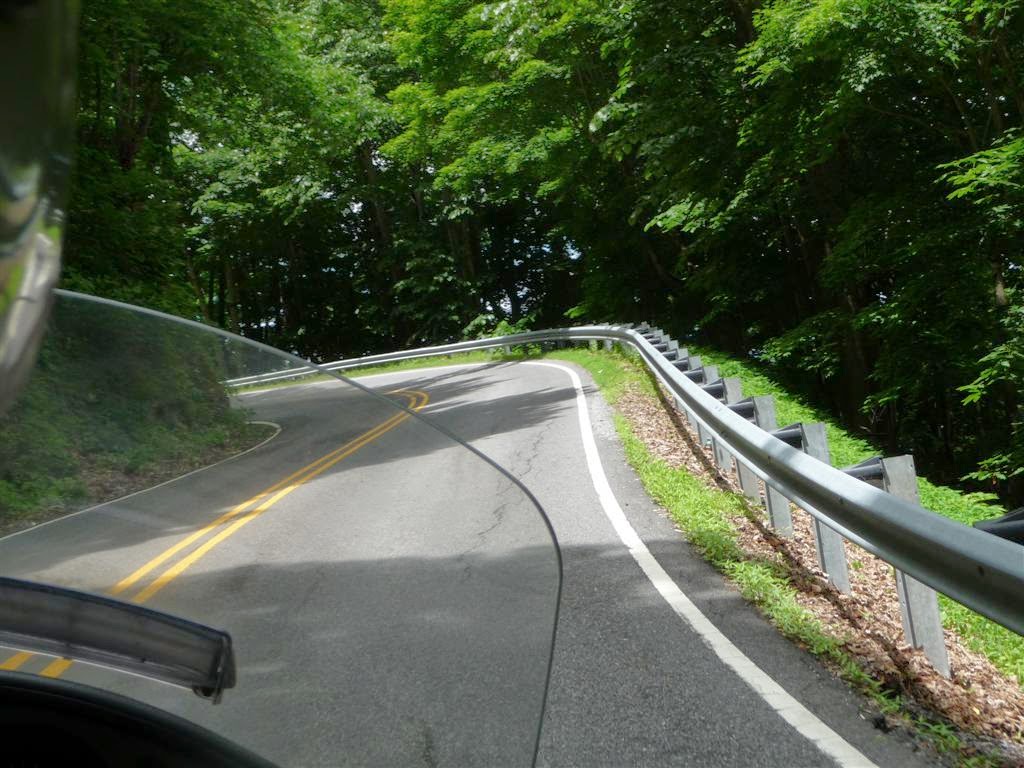 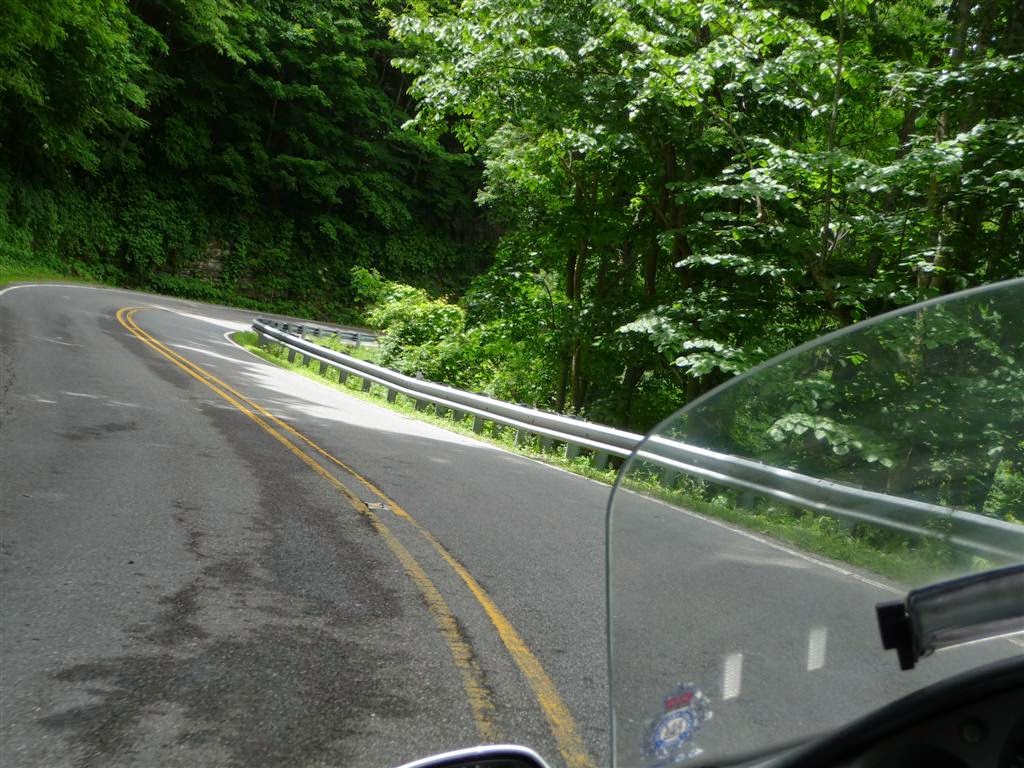 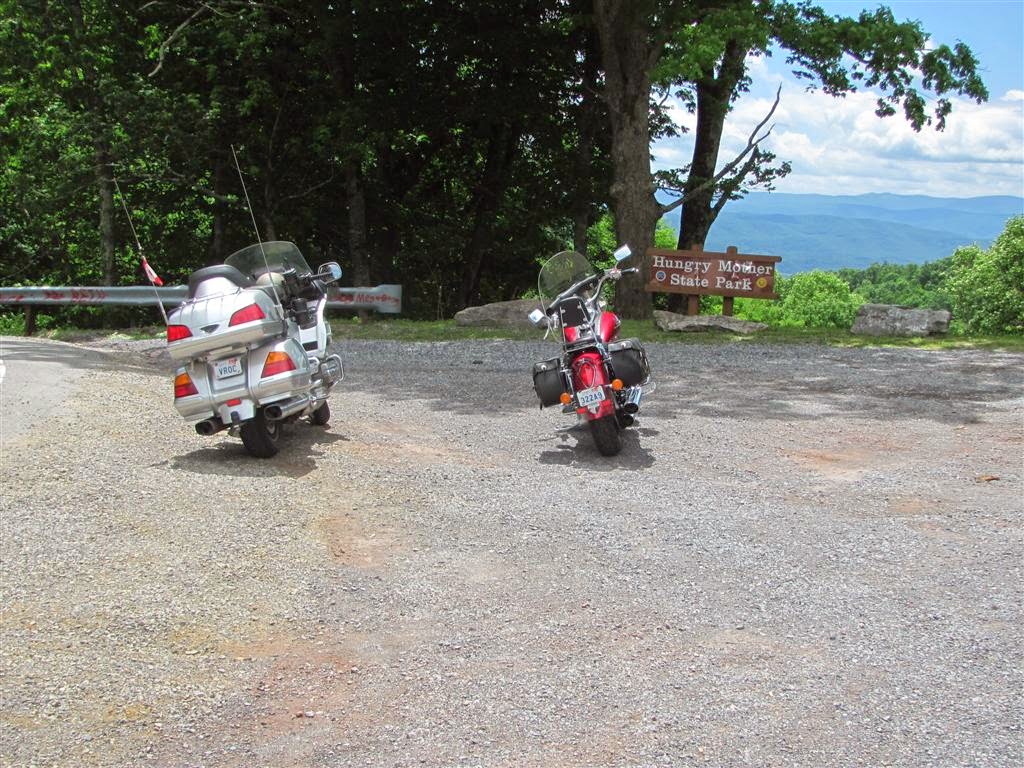 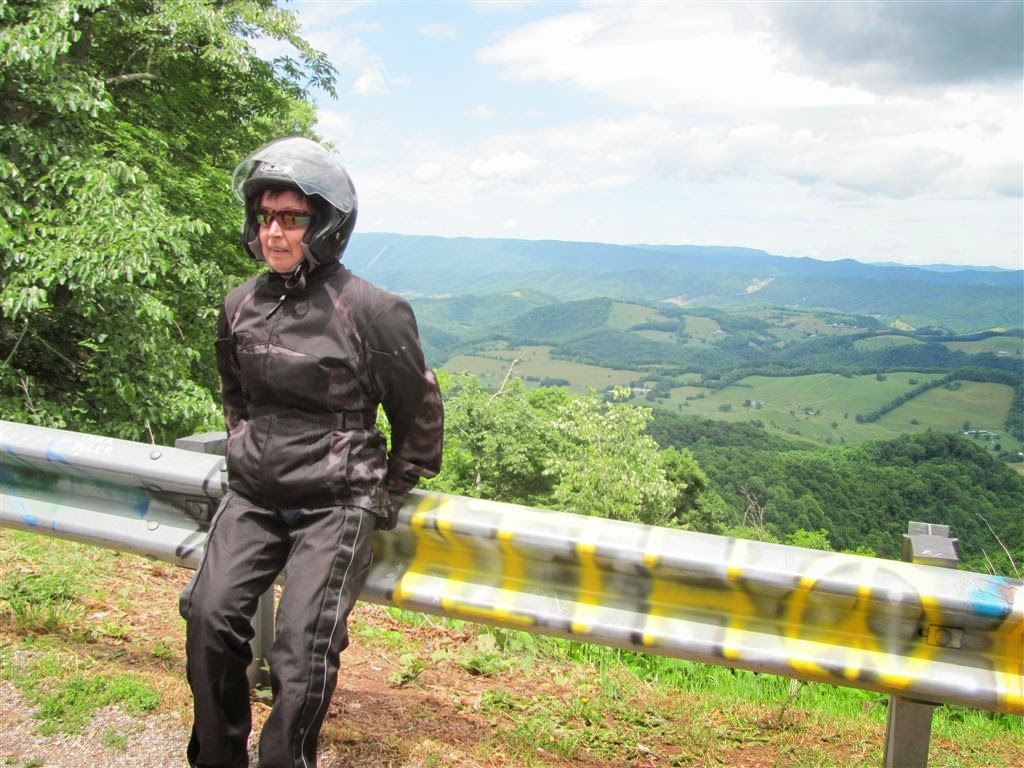 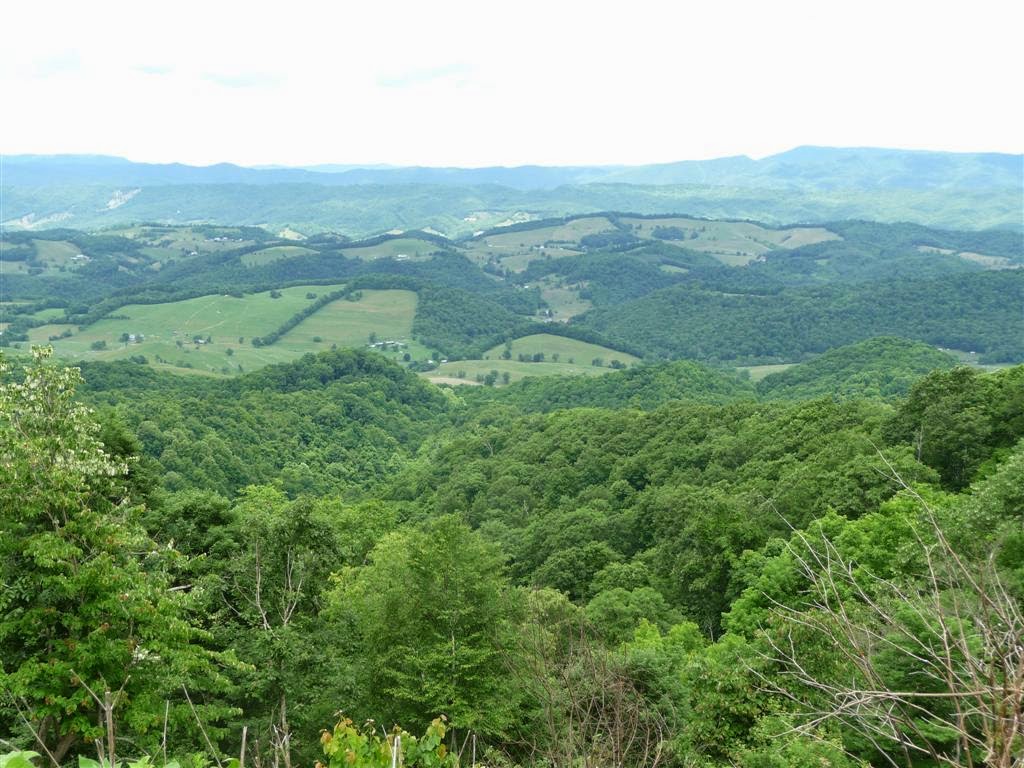 At Hungry Mother, we discussed the rest of the ride. My original plan has been to ride on down 16 past Marion to Mouth Of Wilson and then go to Wytheville via 221 and 21. From there, we would get on I-77 and return to Beckley. However, I sensed that the others had pretty much had enough for their inaugural day. At Marion, we took I-81 direct to Wytheville.

After some discussion about food, I pulled off at Rural Retreat. There is a Mickey D's there where we once took shelter from a large storm and passed the time talking with a Baptist preacher. But no fast food this time. Not far up the road was a Dutch Pantry. Not having done one of these before, we gave it a  try. You place your sandwich order at the deli counter, collect whatever else you want off the shelves, pay the pretty Amish/Mennonite attired young lady and eat a tables in a small dining room. Not bad and a nice break from the big chains. 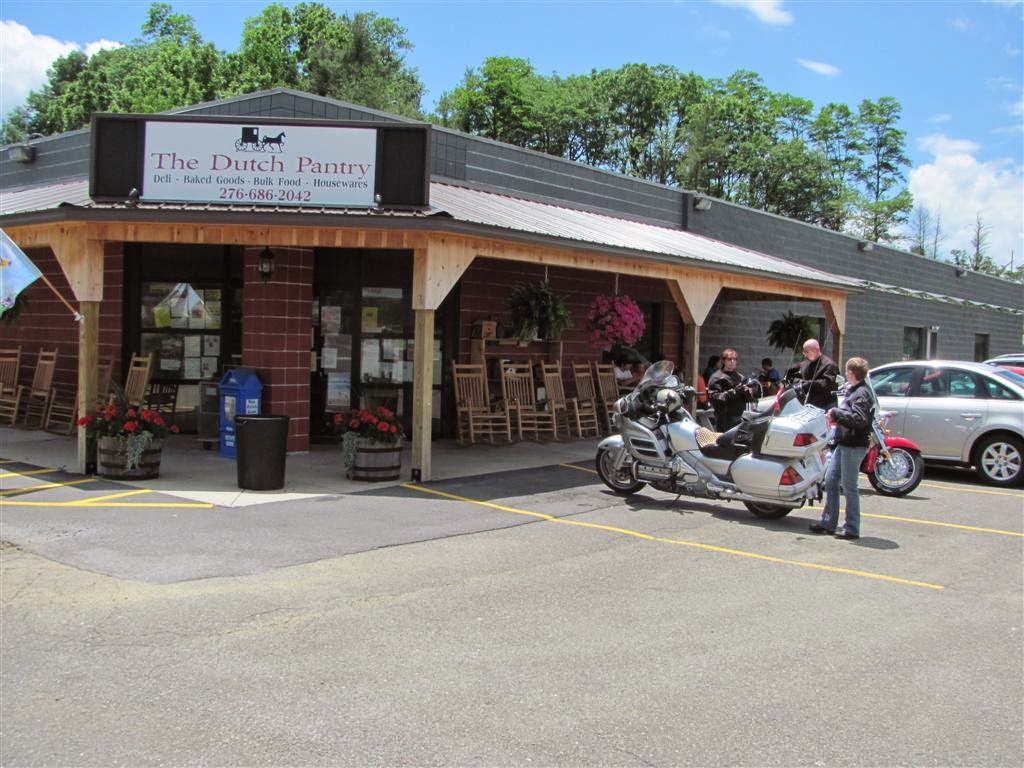 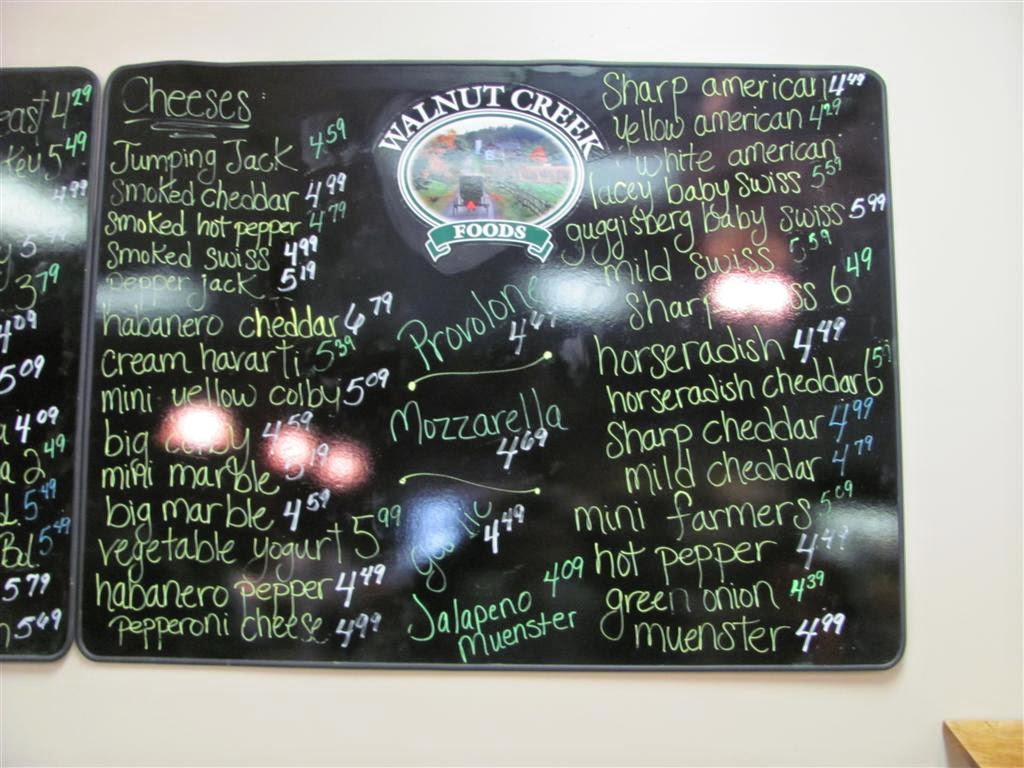 From Rural Retreat, we continued up I-81 to Wytheville where we took the ramp to I-77 North and went on up through Big Walker Mountain Tunnel. It turned out that this was Gary's first tunnel. I stopped at the Rest Area to warn them about the toll booth ahead. We met a lady there from Pennsylvania who had a minivan with a flat tire and no spare. She was trying to call AAA but was unable to describe where she was, so I took the phone and gave the operator directions.

We kept going, crossing back into West (By God) Virginia through East River Mountain Tunnel and got back to the hotel about 4:00 PM, still under mostly clear skies.

I had been fighting all day with the cruise control.  The problem was isolated to the micro-switch at the front brake lever. Nothing I did would allow it to keep the cruise on, so the switch itself might be toast. I will see if Schroader Honda in Hendersonville can help me when we get there on Thursday. 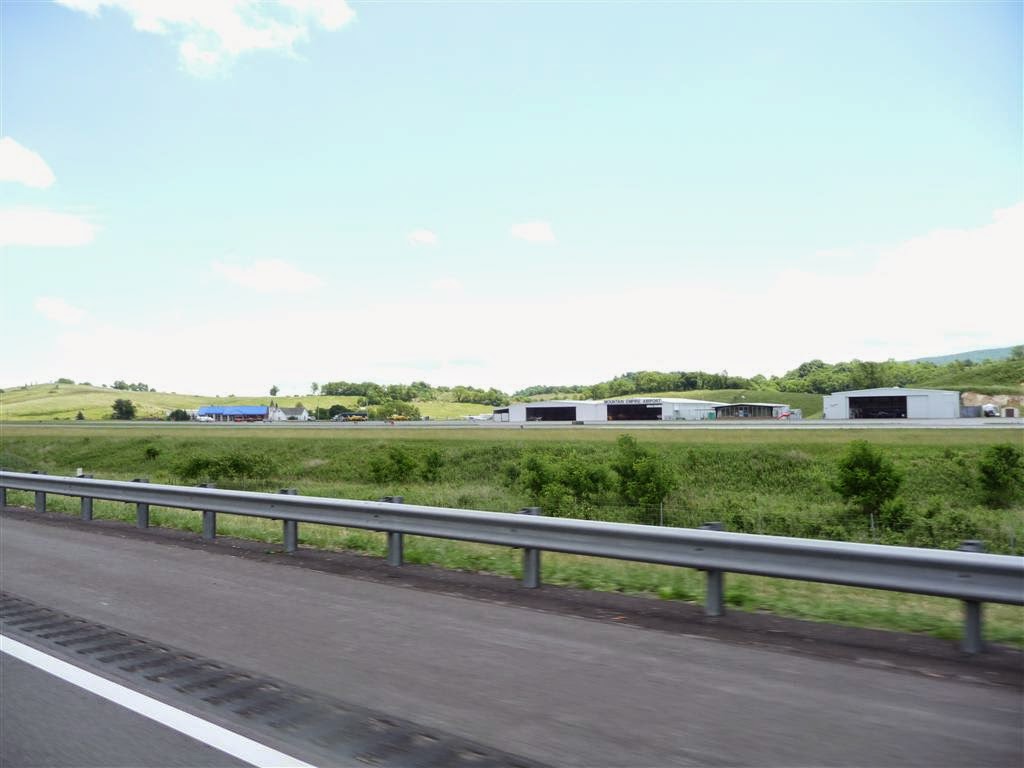 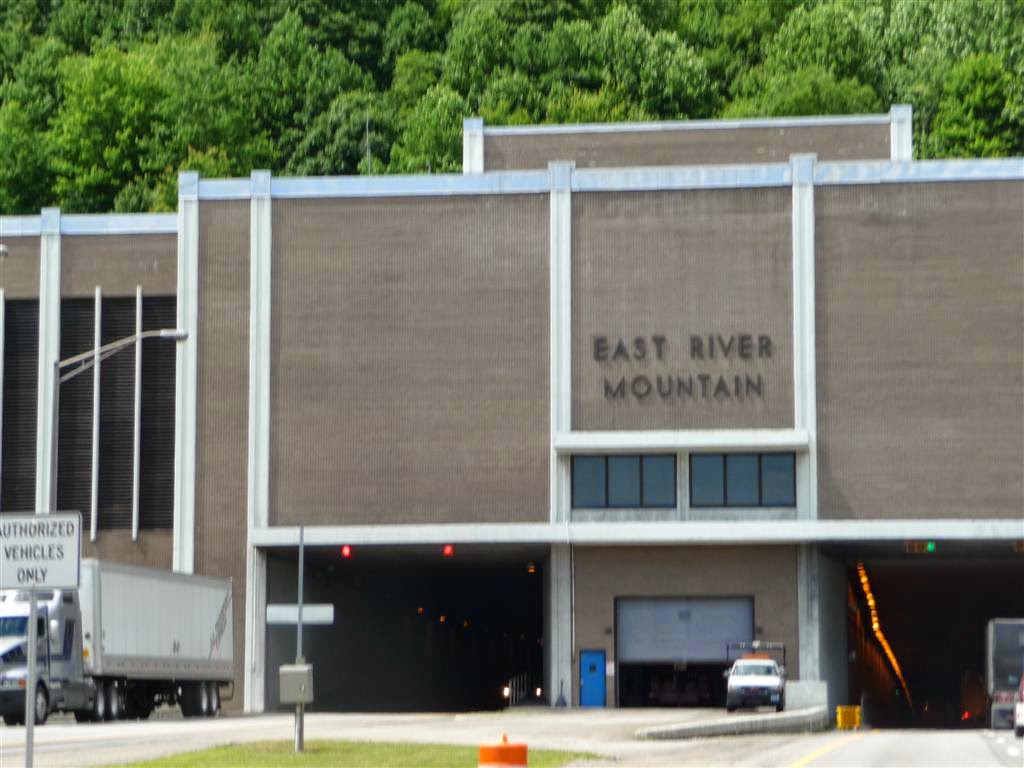 The hotel pool looked beckoning but Gary and Dianne needed bathing suits, so we piled into their truck and went to WalMart. In addition to suits, we got water, pop, salads and sandwiches. Supper was in our rooms tonight. 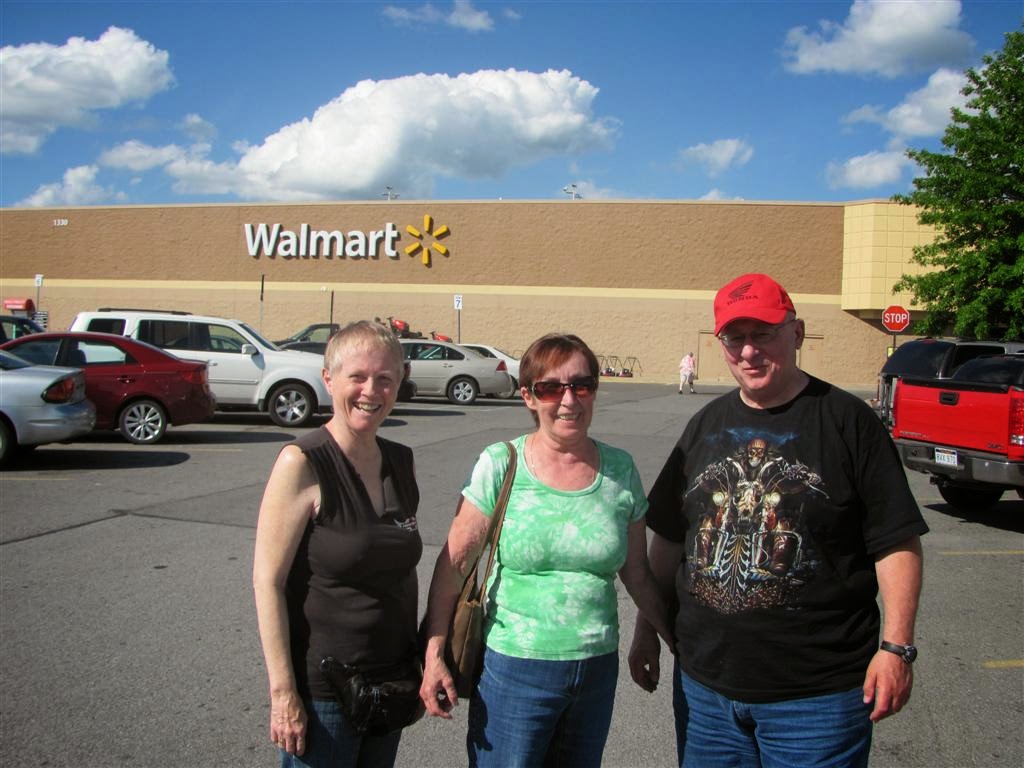 The pool was a nice end to the day. We covered the bikes and not a moment too soon. Shortly after we came in, thunder started booming and the rain started coming down. Sandy went to bed about 9:30 and, after swapping some stories, I hit the sack about 11:00.

I have rethought a bit of the routing. Since we will be bringing some novices (as far a s mountain riding goes) down on Monday, I believe I will skip Highway 151 up onto the Blue Ridge Parkway. Instead, we will catch the BRP at Asheville and ride it down to Cherokee. There is no reason why their first experience with the mountain roads should be the gnarliest. 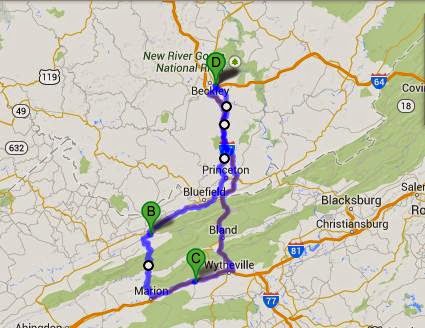 Hey Jim,
We enjoyed the BOTD, but as you heard in the song, "on the back of the dragon we nearly got burned by all the loose gravel on each right turn."
Admittedly, we may have been riding a little aggressively - and it seems we were coming through right after someone in a big vehicle made every turn with two wheels on the shoulder! Beautiful road though.

Mark, that is a familiar feature of many West (By God) Virginia roads. They often snag the inside edge and it doesn't take a big vehicle to do it.