I was up before 6:00 to work on the blog. Sandy ignored three rounds of snooze on the hotel alarm clock. I have no idea why she even set it. Just before 8:00, we took some of the bags down to the truck and joined Gary and Dianne in the breakfast area. There was no need to rush to get moving, so we made the most of it.

We got word this morning that Jim Siegelaar had been in a wreck. Jim and his wife Cat live in Fillmore, California and are the organizers of the Aebleskiver Rally in Solvang. Apparently he has a badly broken leg that will get the benefit of a titanium rod and some other injuries, but is expected to make a full recovery. Get well soon, Jim.

On the way out of town, Sandy wanted to stop at the Boot Box. Their ad in the hotel guide said that, among many kinds of boots and knives, they carried Crocs. She has been having trouble finding a ladies size 5 Wide. They did have many fine boots and knives and sporting clothes but had stopped carrying Crocs. Just her luck. 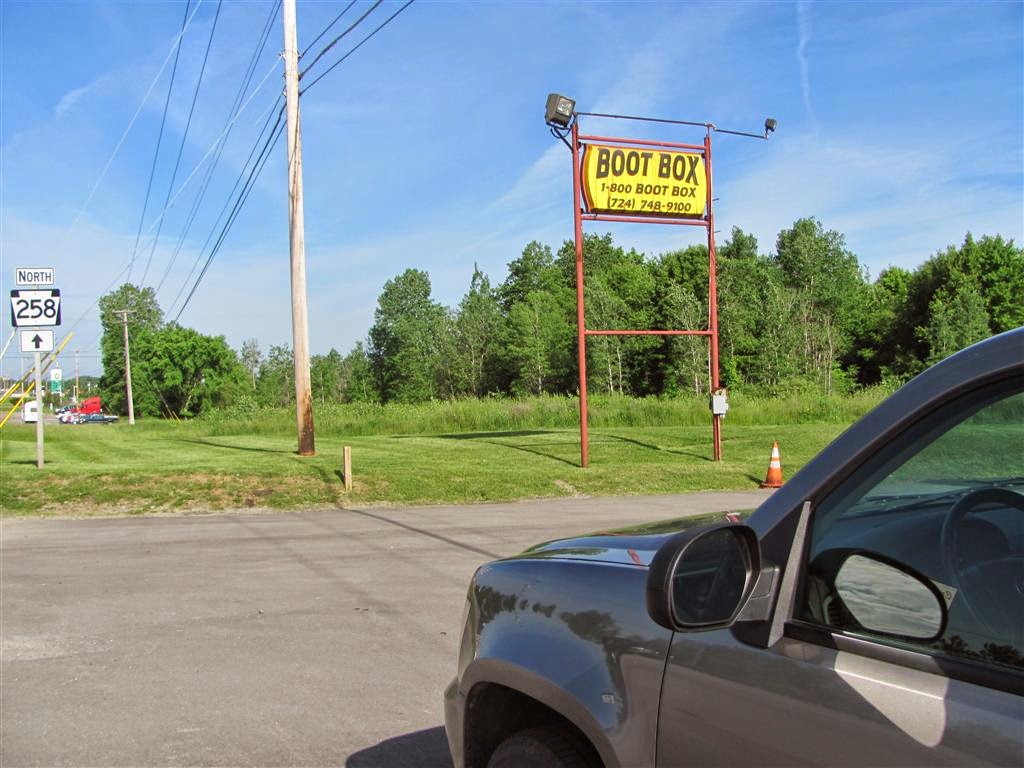 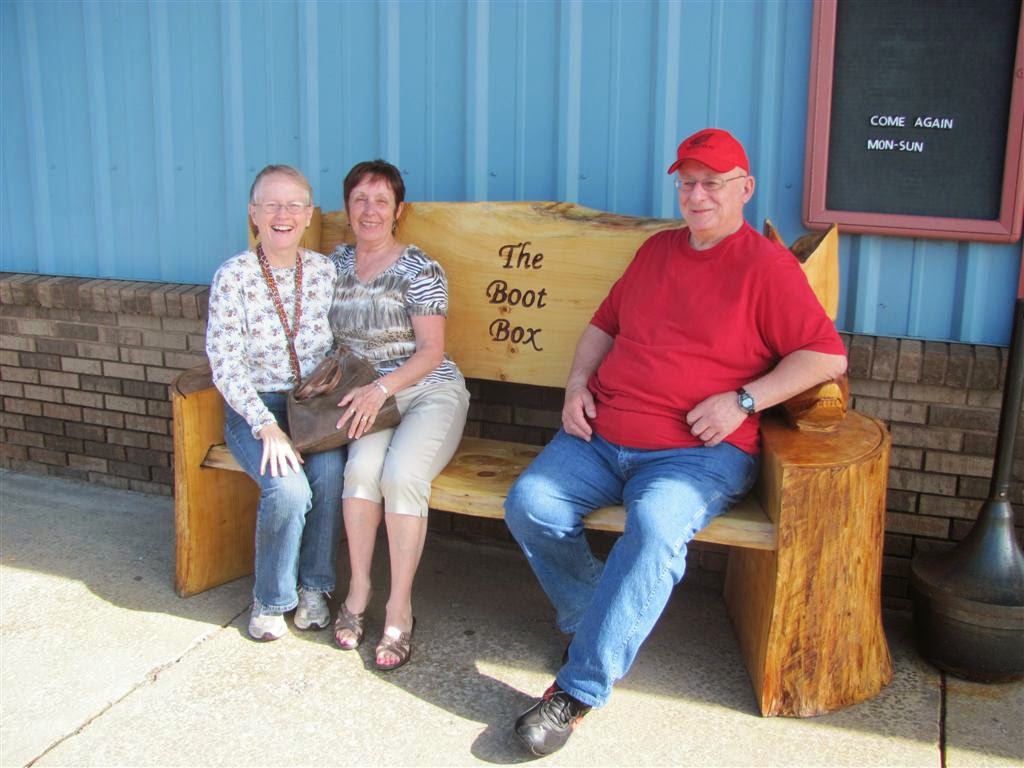 We finally left Grove City at 9:25. The sky was partly cloudy with gusty winds. We threaded our way down past Pittsburgh through relatively light traffic and stopped at the Rest Area just south of the city for a quick break. The sky was becoming more overcast. There was a big system moving east that had caused tornadoes in Colorado yesterday and was threatening Texas today. We didn't want to meet it tomorrow on a riding day.

We kept going south over the West Virginia border and stopped at Fairmont for lunch. The McDonald's parking lot was a little tight but we got the trucks in. I had a good conversation with a local gentleman before we got the food. Unlike our usual to go/eat in the truck mode, we actually sat down inside. 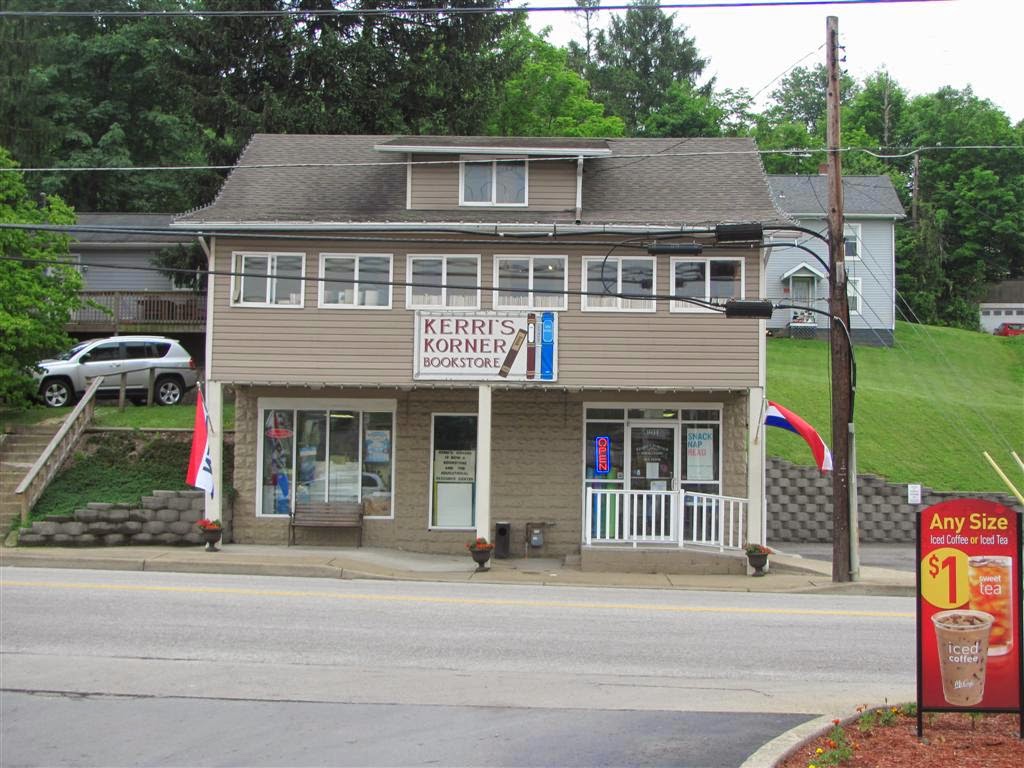 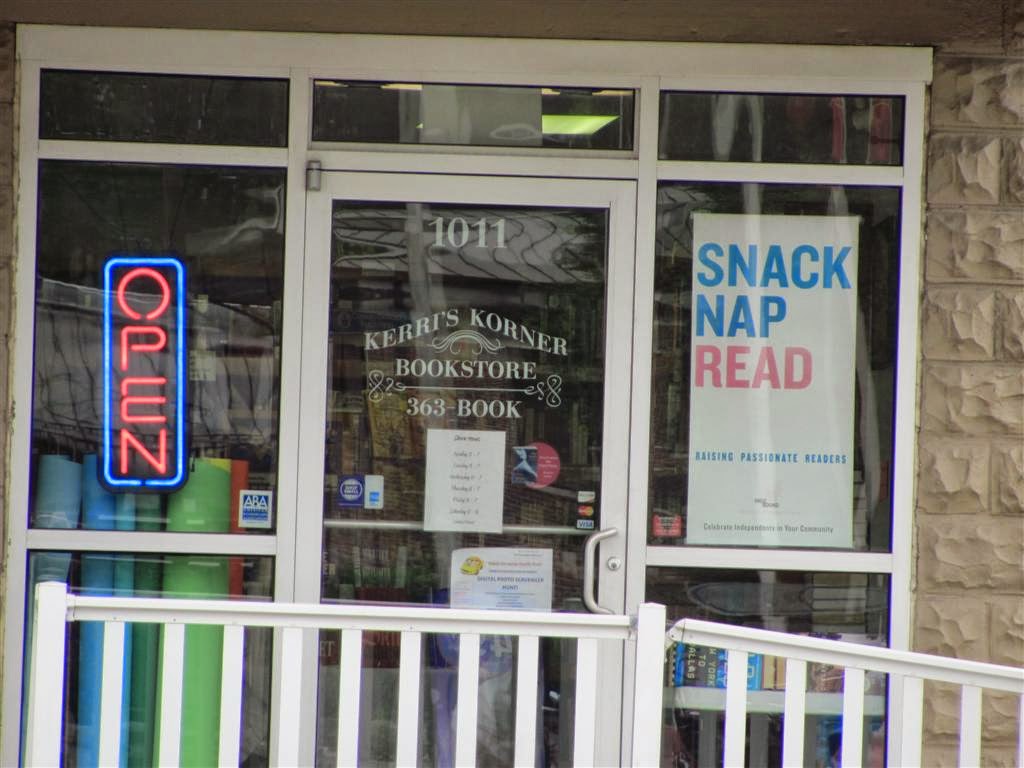 The book store has its priorities right

We kept going south on I-79 past Clarksburg and Weston (where we will be stopping on our way back). The truck has a V8 and can maintain speed on these hills but we pay for it at the gas pump. To keep costs down, I let it slow on the upgrades and build momentum going down, just like a Rolls Cunardly. 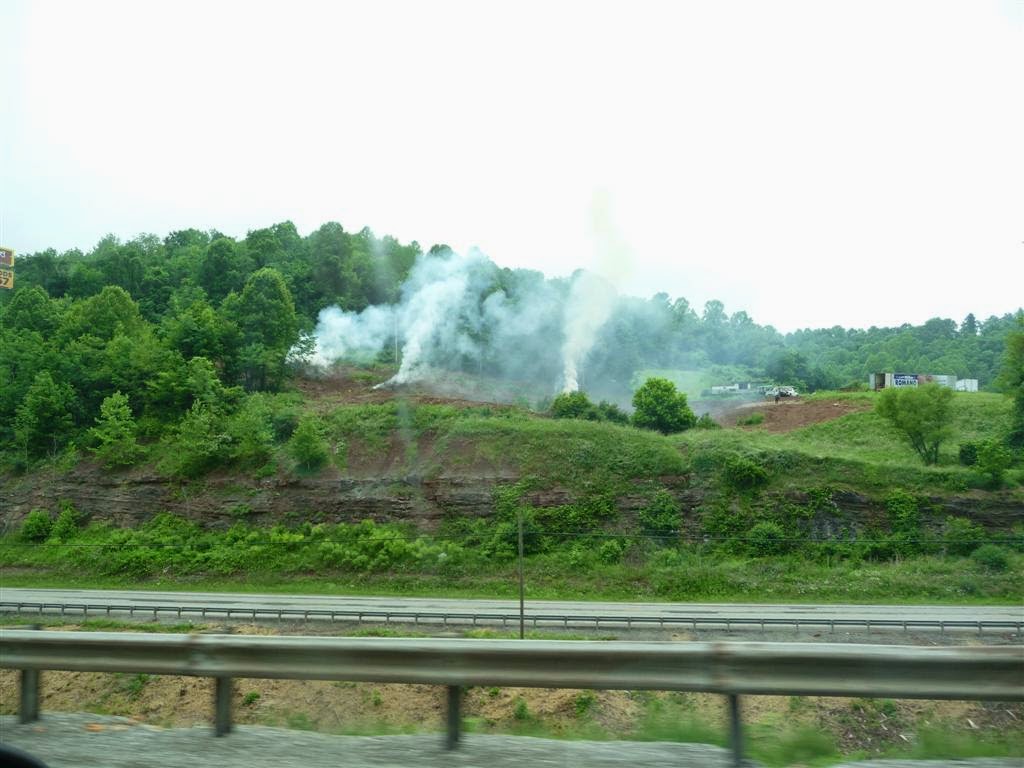 
We left I-79 for US 19 just south of Sutton and followed the highway over Powell Mountain to Summersville. I stopped there at a Sheetz to get some Gatorade and snacks. I'd been sleepy and needed to replenish some electrolytes. My friend Scorpion says the best replenisher is V8 juice but I didn't see any. This is not the kind of road that you want to be drowsy on.

We moved on and stopped at the New River Gorge Visitor Center. After checking out the building and exhibits, we walked down to the first bridge overlook. Then Gary walked down to the second overlook. I was down there once before and never saw a second need to go there, but I joined him anyway. Great view, long climb back up. 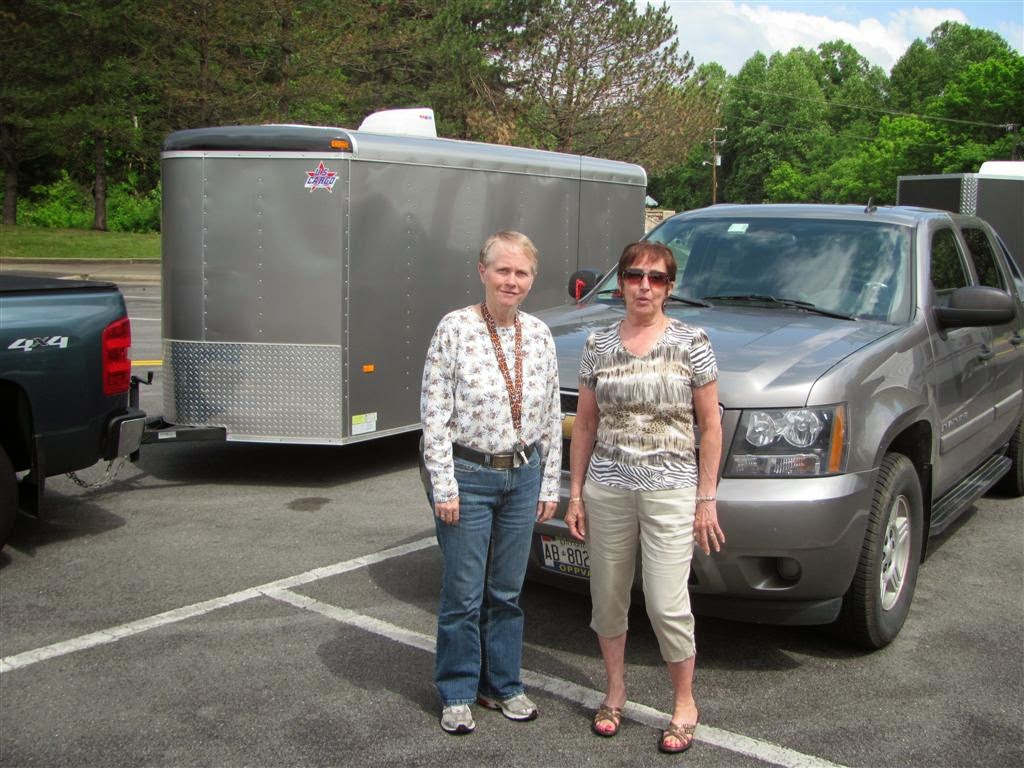 The ladies at the New River Gorge Visitor Center 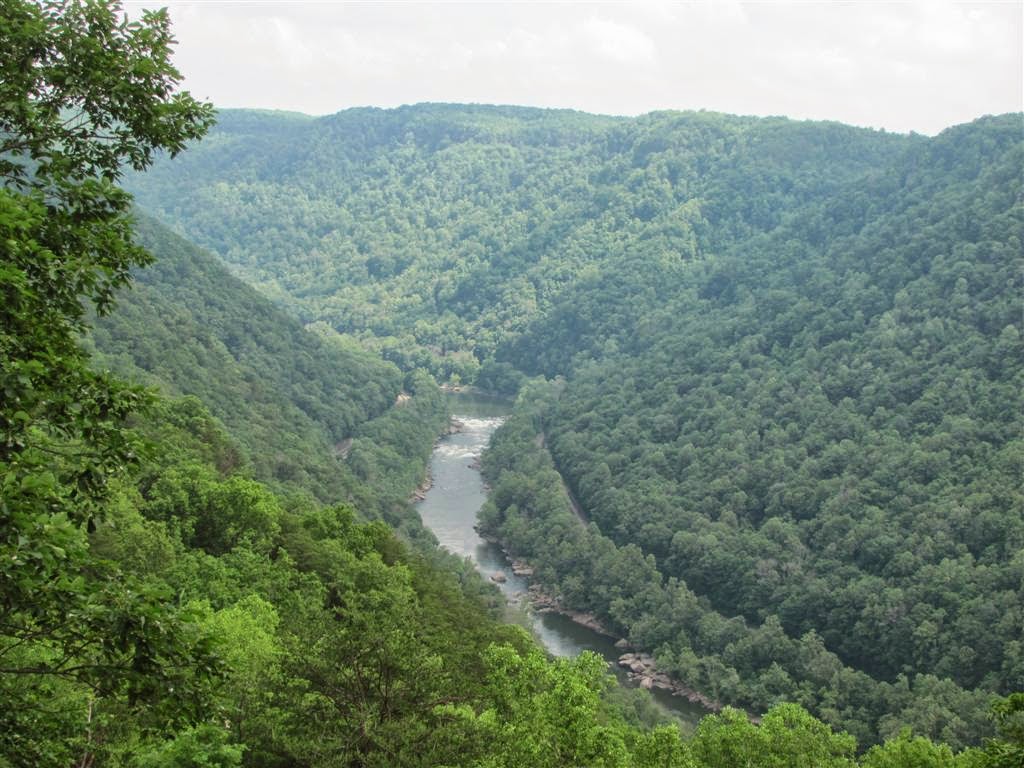 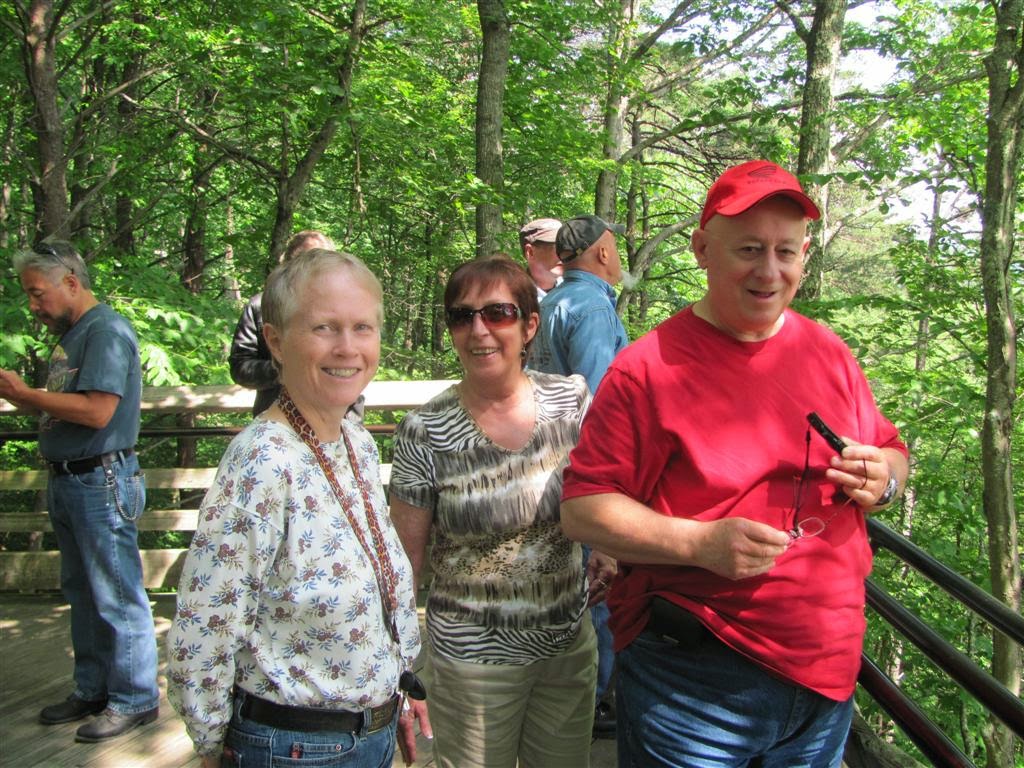 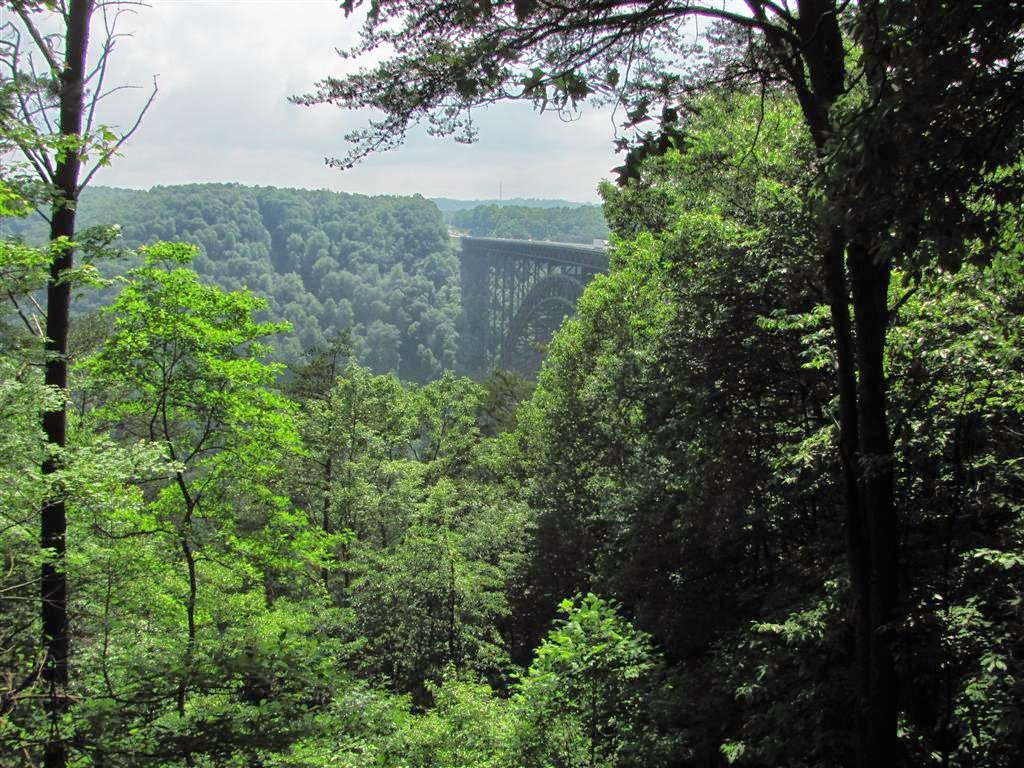 The New River Gorge Bridge on US 19 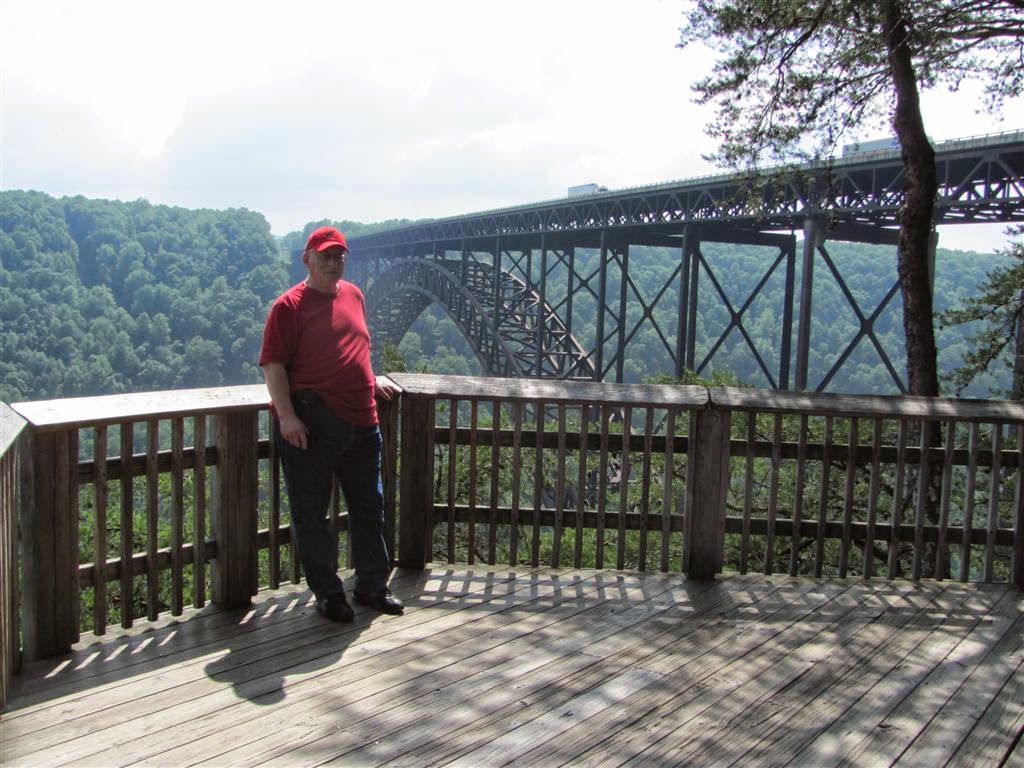 Gary on the second observation platform 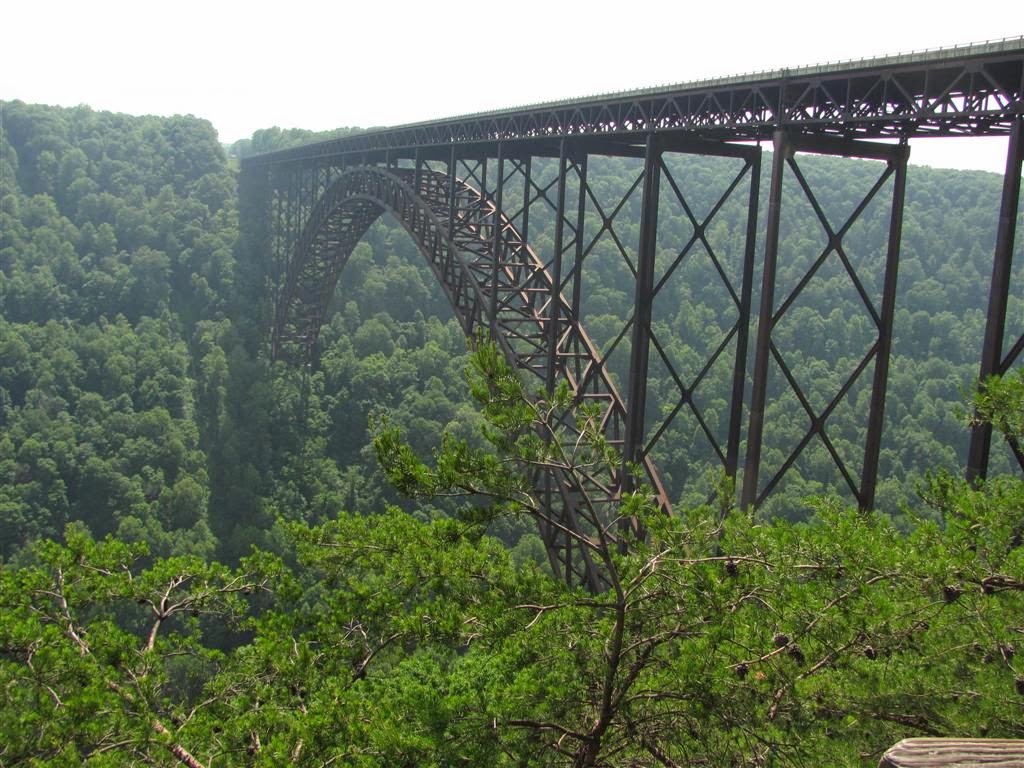 A lower view of the bridge 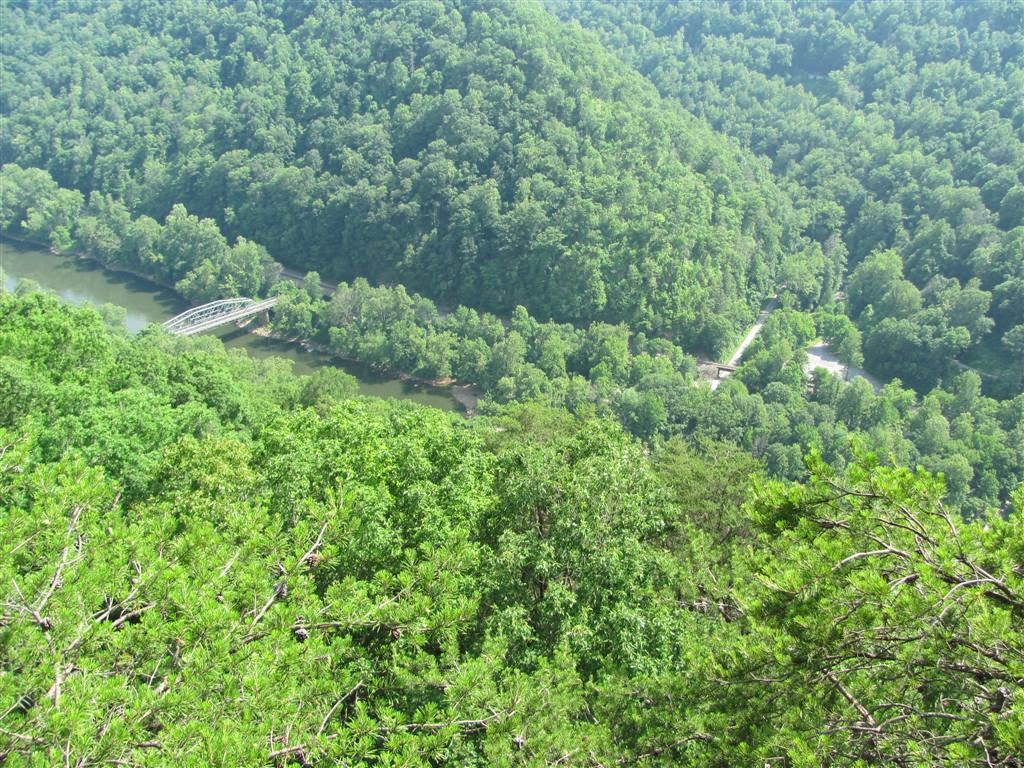 Wrong Turn and KT took us down there once

It was only 20 miles more to Beckley. We took US 19 right through town. It is amazing how developed and modern this area is. Seeing all their facilities makes me feel that Sudbury is underprivileged. The Microtel, where we stayed with Sherm, Lucky Al, Mal and Yvette on the way to Williamsburg in 2012, is all alone at the south end. We checked in and got adjoining ground floor rooms. The exercise room was right next door and the pool was only a few feet away. We couldn't have asked for better, and we will be here for three nights. 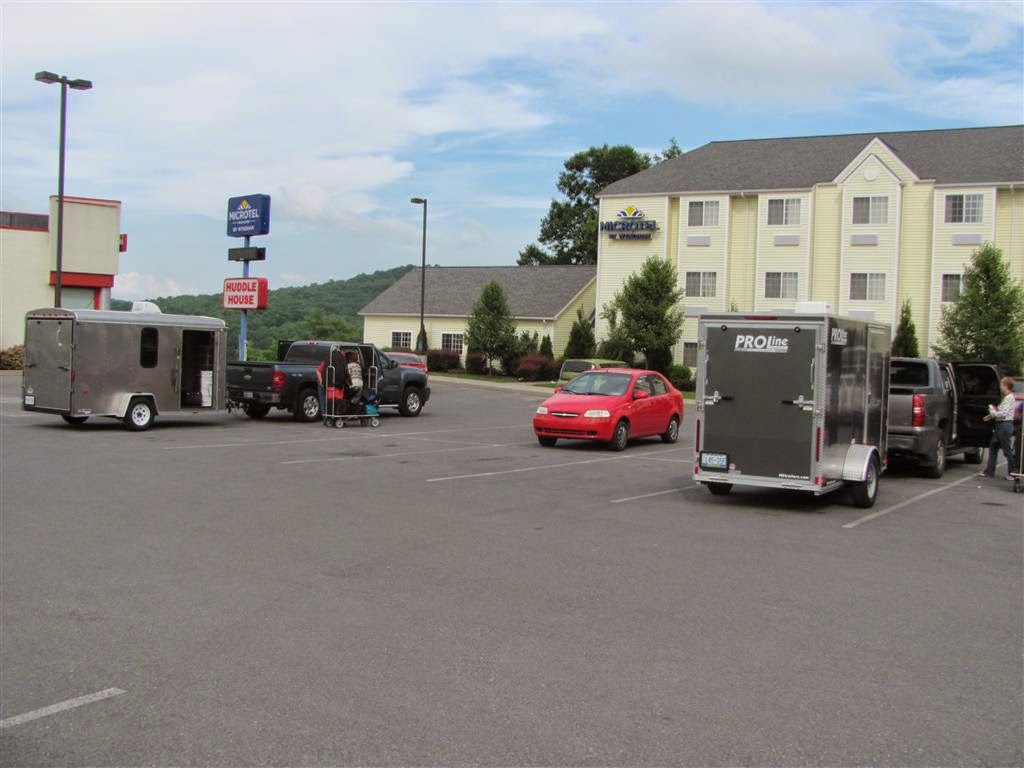 Gary unhooked his truck and  we we went for a drive. First. we stopped at CJ's for refreshments for later. The concept of a drive-through liquor store is interesting. You can still get booze even if you are too drunk to walk. 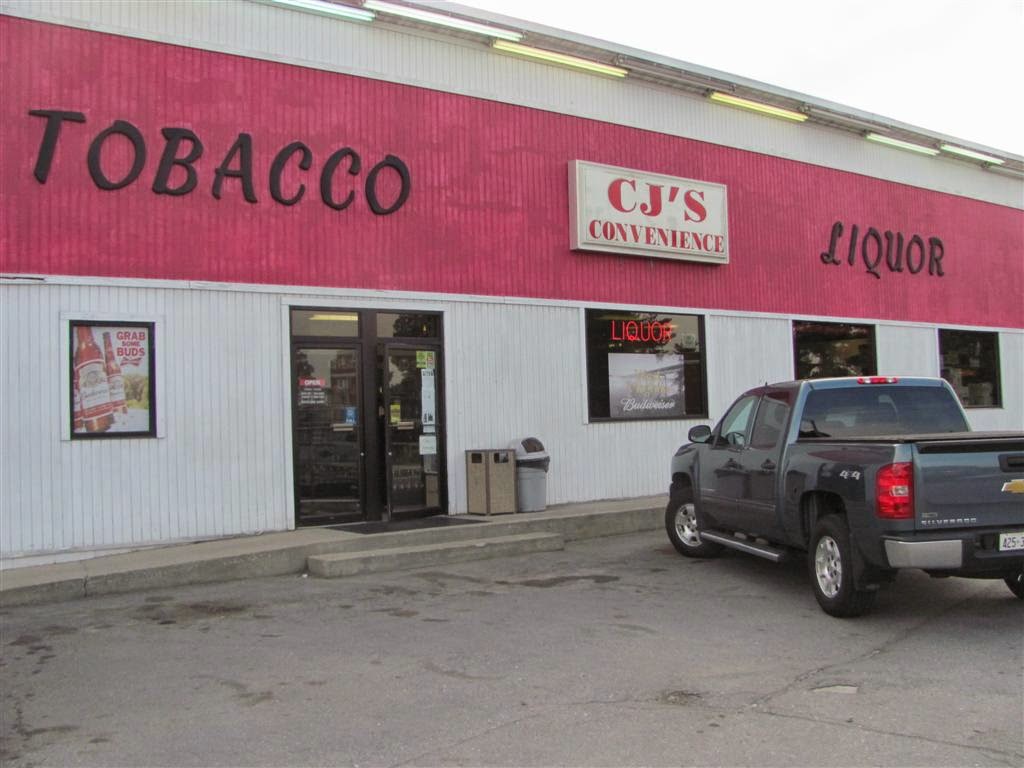 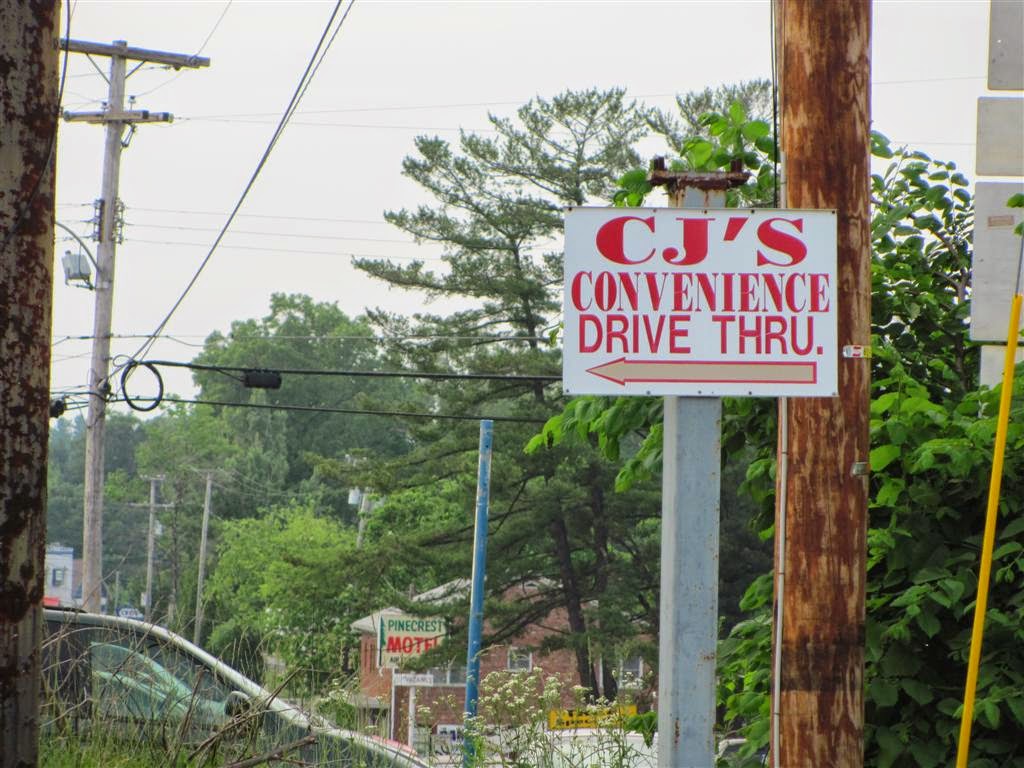 You don't even have to leave your vehicle

We went on up the strip to the Olive Garden for supper. I  had a baked shrimp pasta while Sandy had a lunchtime sized serving of tortellini. It was more than I had intended. Following supper, we went to Kroger's for some refreshing prune juice and I got some small cans of v8. 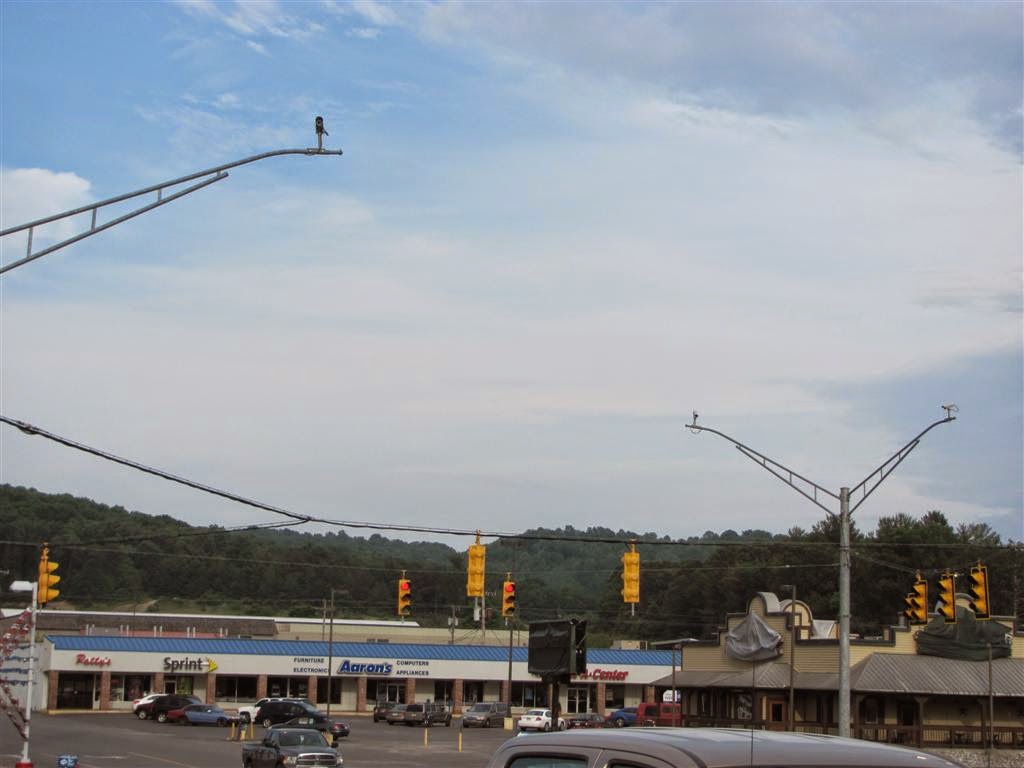 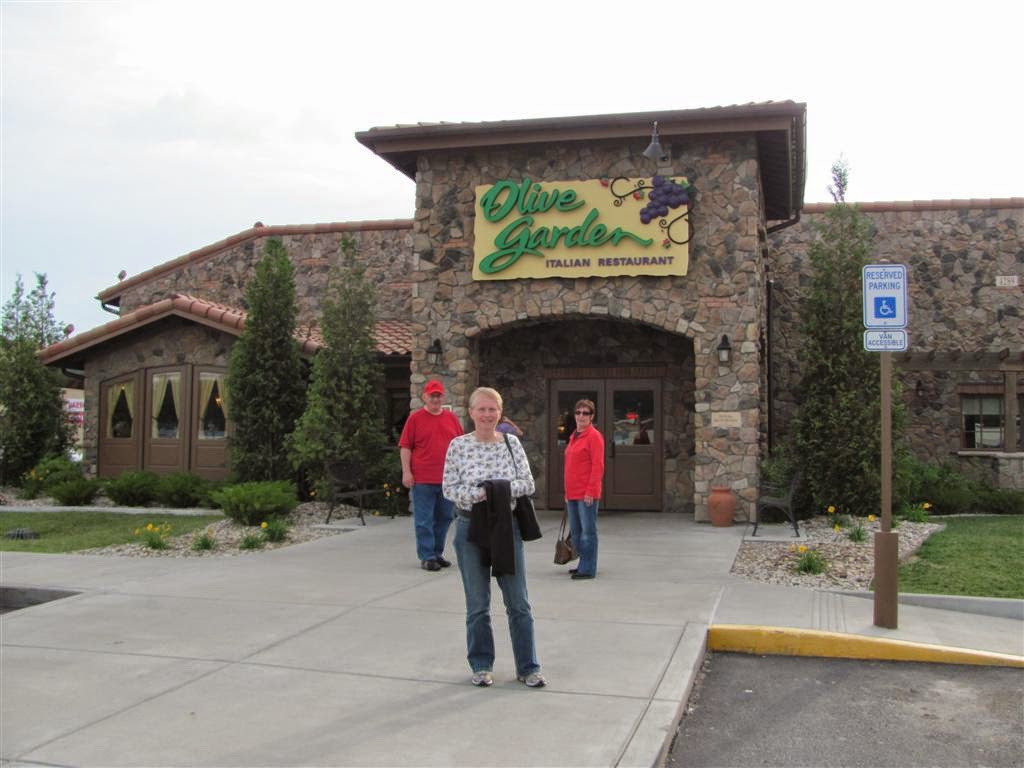 Supper at the Olive Garden 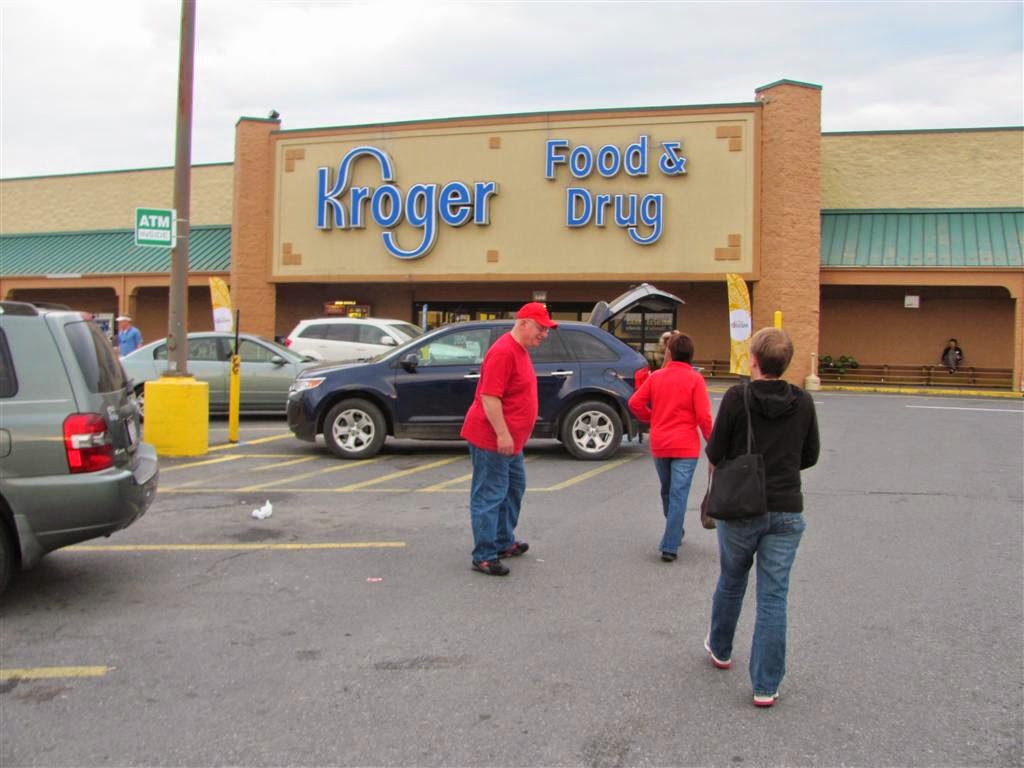 A stop for other essentials

Back in the room, we visited for a bit and then I did some blog work, posted the bills and checked the weather. Tomorrow has a 50% chance of thunderstorms, so we will see what the morning brings. 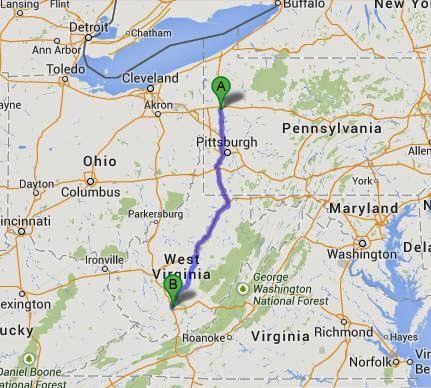