We heard the rumble as Don M. pulled out at 6:00 AM this morning. He and Roger planned to be home tomorrow and had set their sights on the same Super 8 in Grove City, Pennsylvania that we had stayed at on the way down. The rest of us were aiming for Weston, West Virginia today and weren't in as big a rush. Riders headed out in several groups with the trucks/trailers leaving last. Sandy and I led Gary and Dianne out at 7:45 AM. Danielle and Percy followed on their Harley's so they could follow us through the interchanges of Asheville. 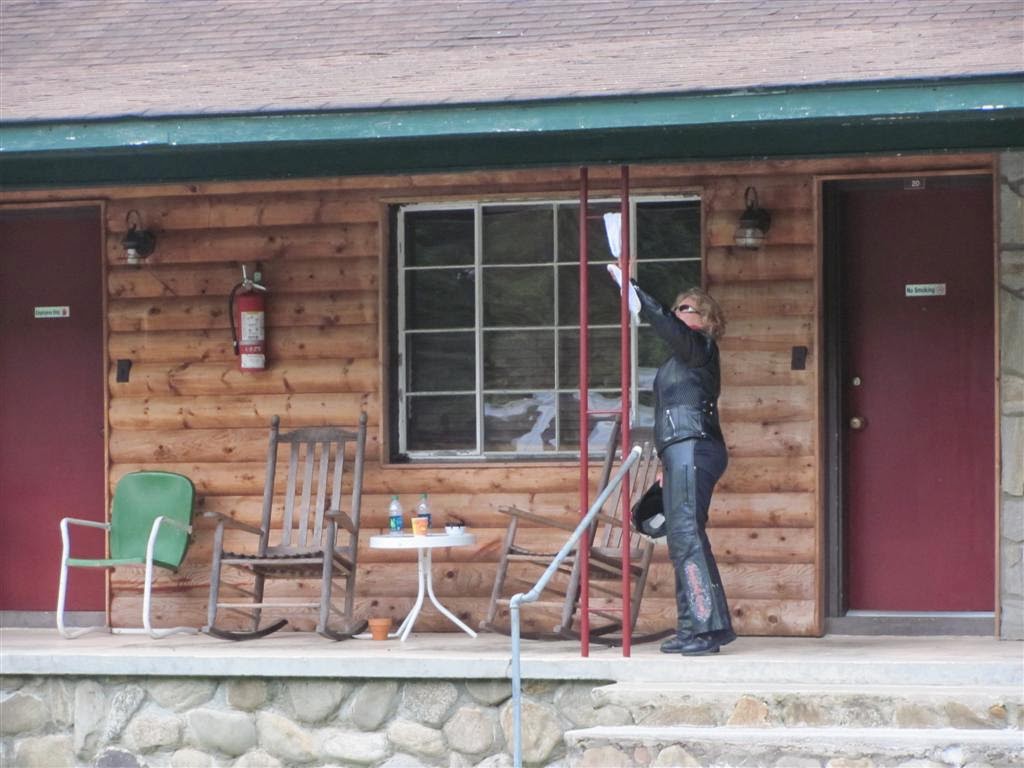 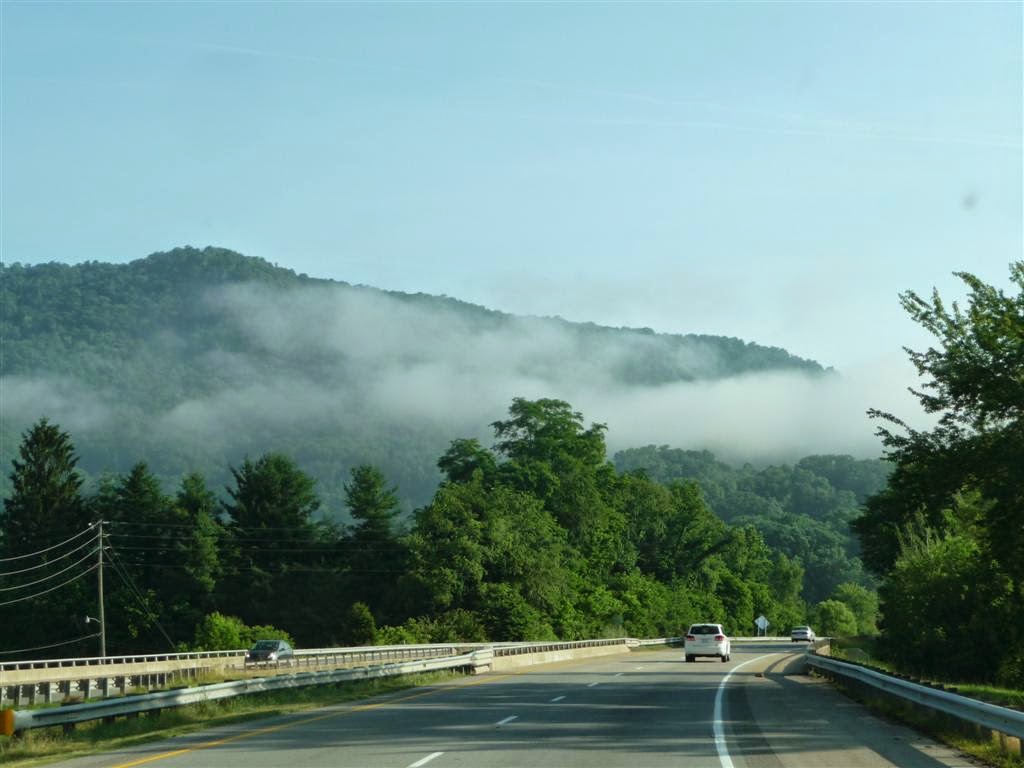 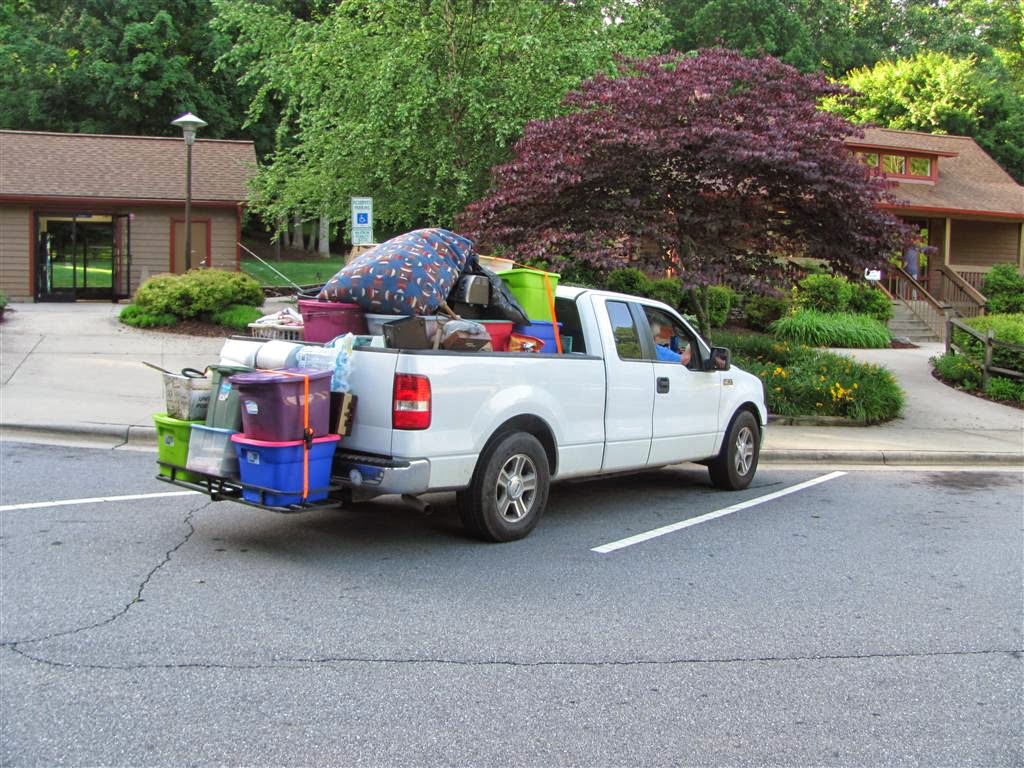 The Clampett's in a rest area near Waynesville 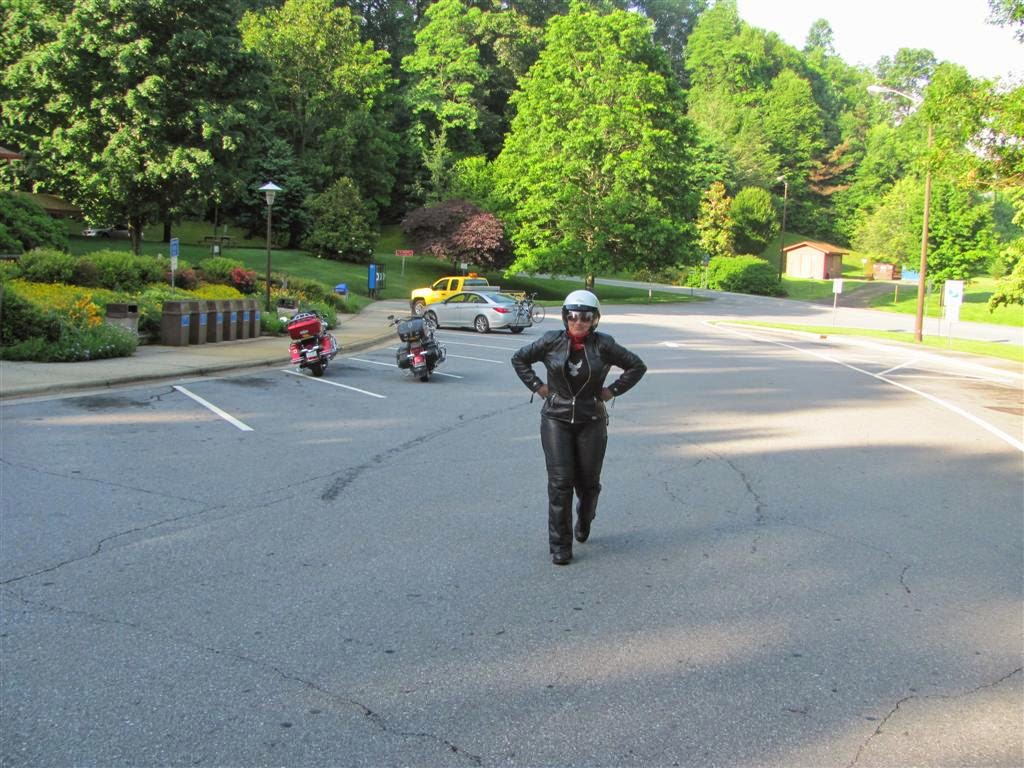 After a stop to check the tie-downs on the bikes, we successfully negotiated the highways and byways from I-40 to I-26. We went up over Buckner and Sams Gaps and stopped for a bathroom break at the Welcome Center on the Tennessee side of the ridge. The group led by President Rob was still there. Shaun's rear tire was down to cord and they were planning to stop at a Honda dealer in Johnson City to see if they could get a new skin. That was the second tire to give up on this trip. Percy and Danielle decided to stop as well at the Harley dealership in Johnson City to check on a slow leak in her front tire, so our two trucks/trailers went on alone. 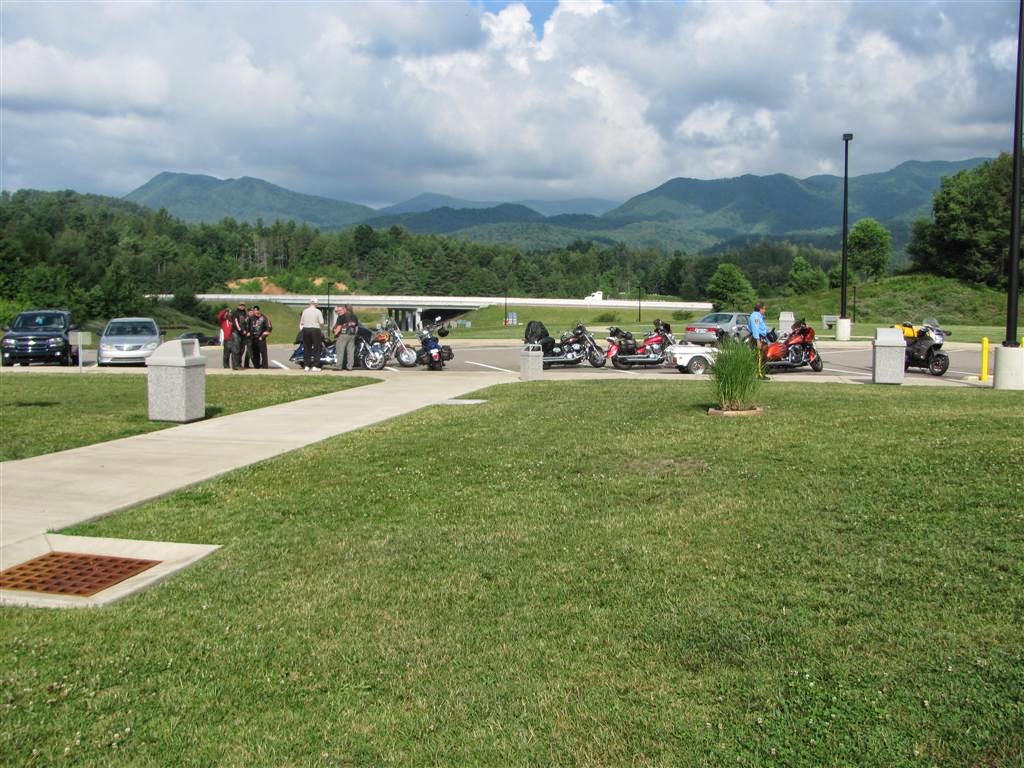 We went all the way up I-26 to I-81 and headed northeast, entering Virginia about 10:15. There was a gas stop (Virginia gas is much cheaper) at the Shell in Rural Retreat. While there, we grabbed food to go at the adjacent Mickey D's. Then we reached I-77 north in Wytheville and passed through the two tunnels into West Virginia. As we cleared East River Mountain Tunnel, we could see clouds building. Up until now, it had been hot and sunny but it started to rain on the climb to Princeton. By the time we got there, it stopped. 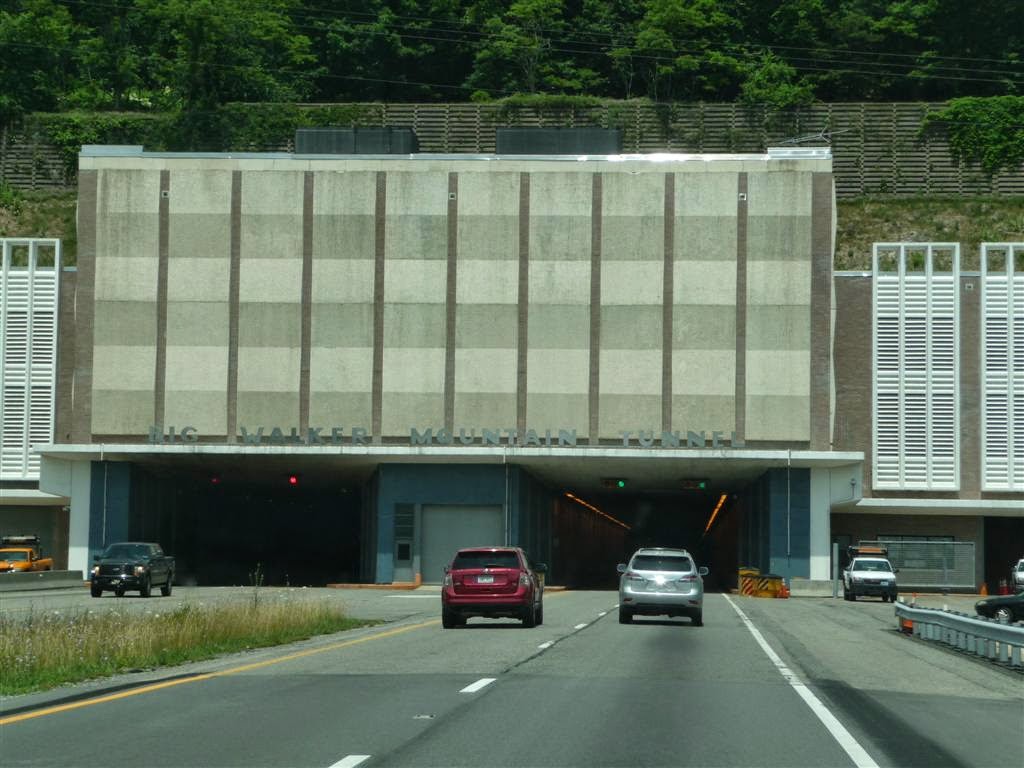 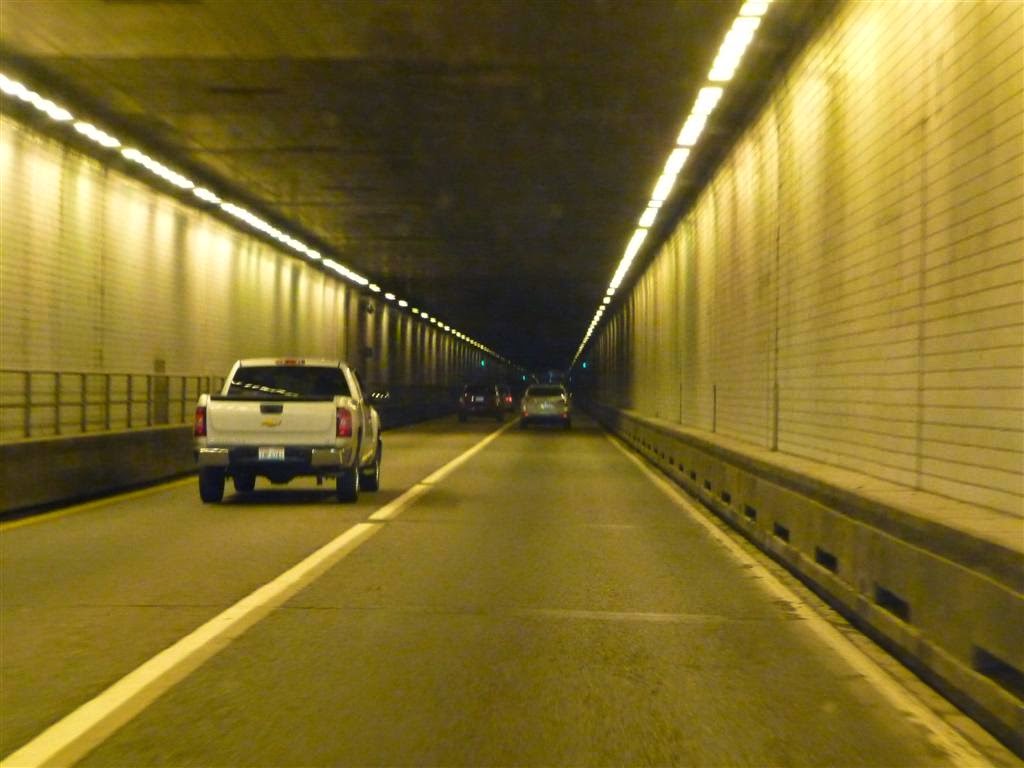 Stay away from the walls.... 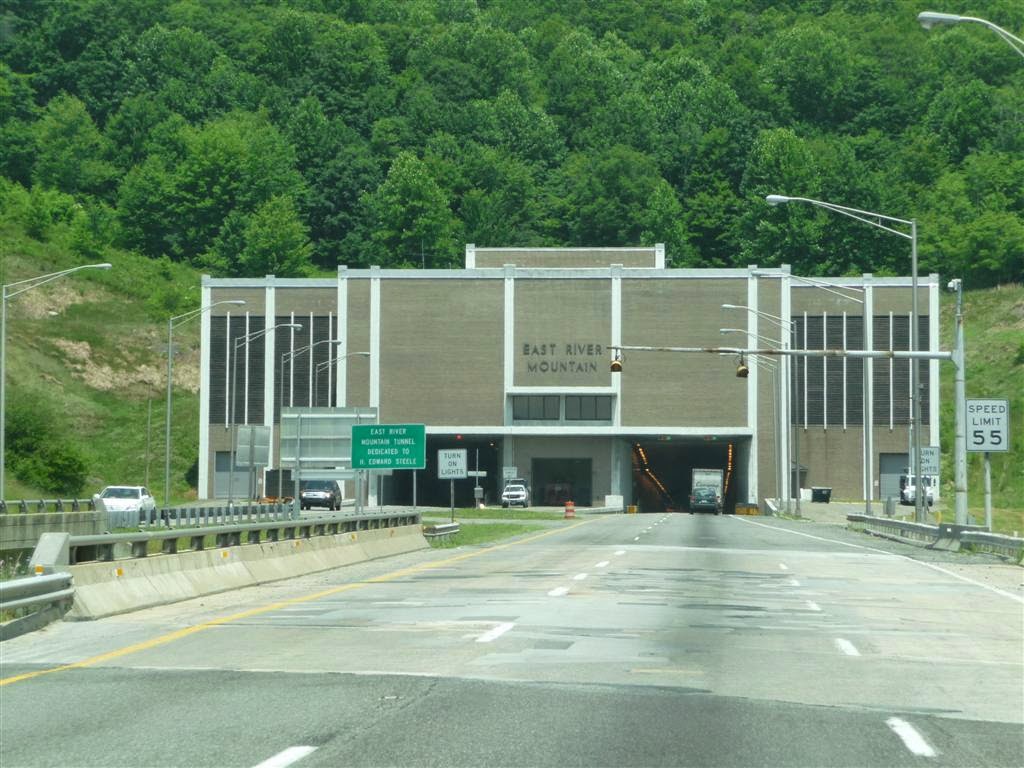 The second tunnel and the West Virginia border 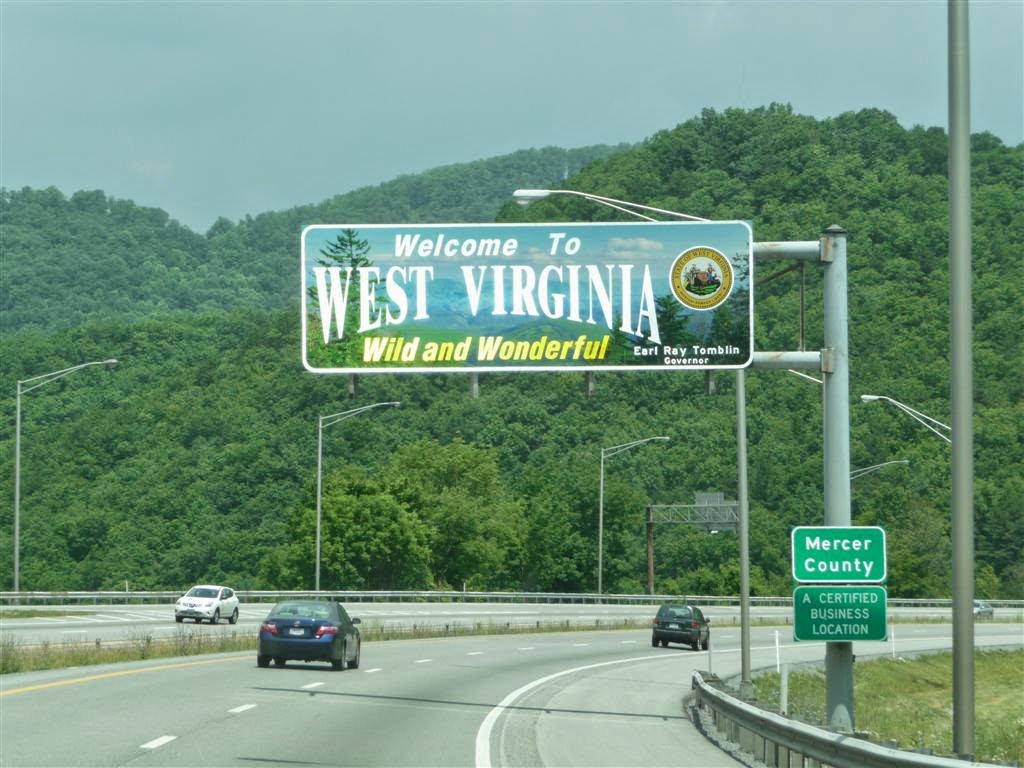 We rolled through the first toll booth on I-77 but Gary got blocked by a truck who was being held for some reason. He had to back up and use a different lane. North of Beckley, we took the exit to US 19 and cleared the second toll booth. The EZ Pass is a great device, eliminating the need to handle change. 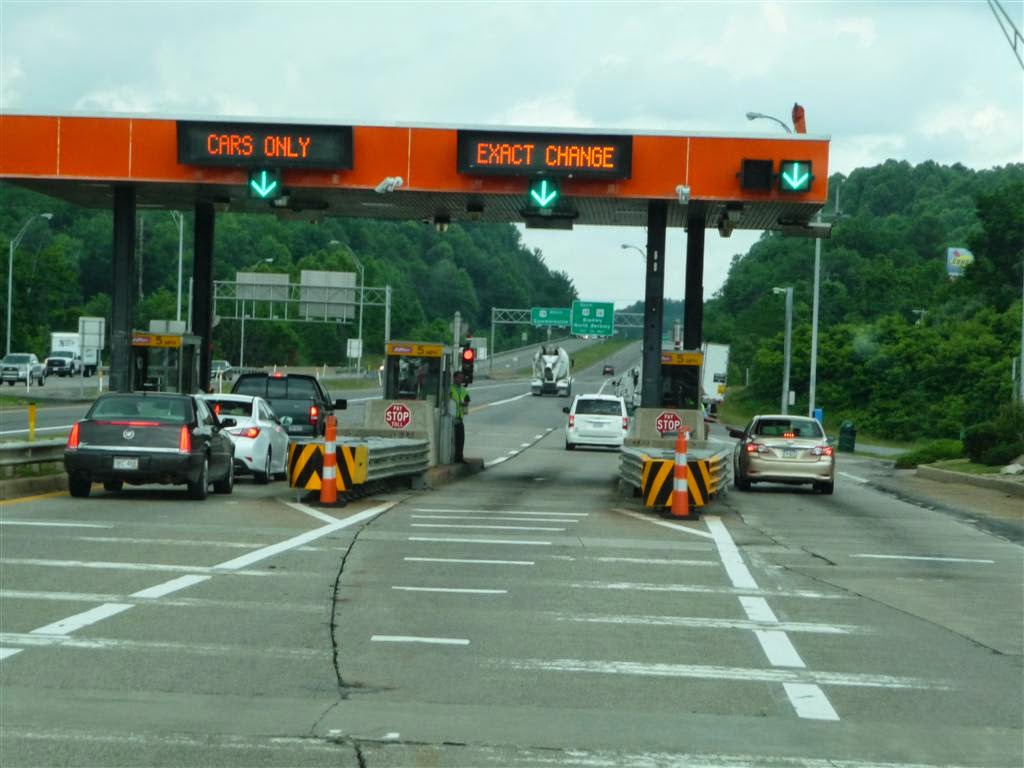 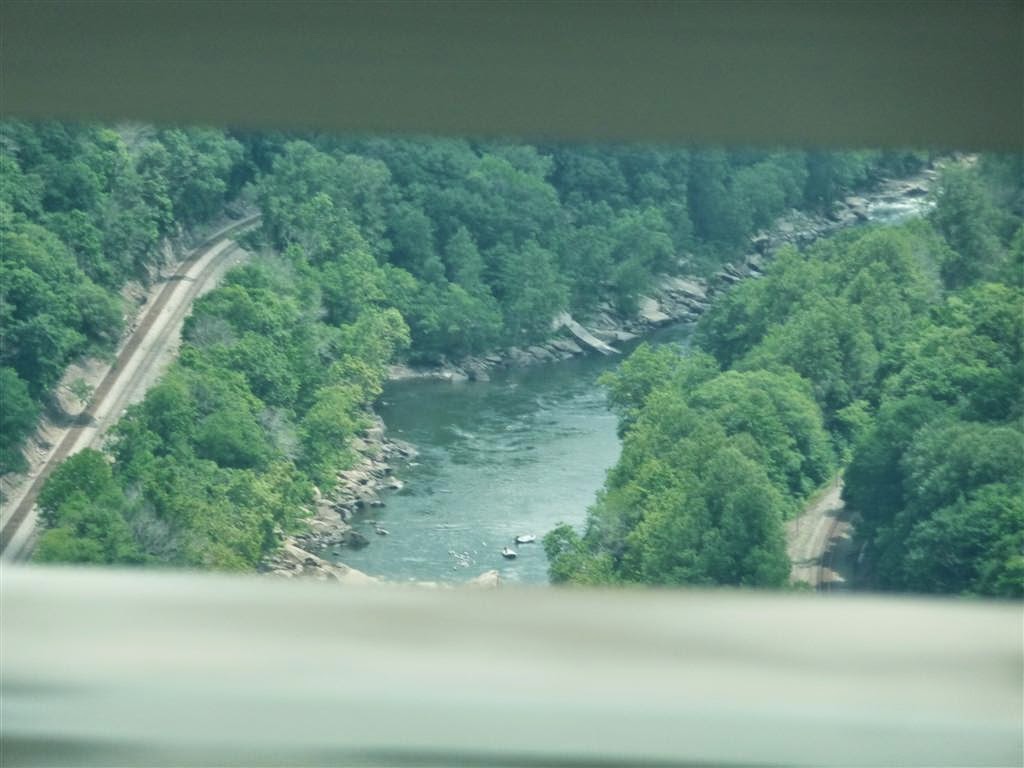 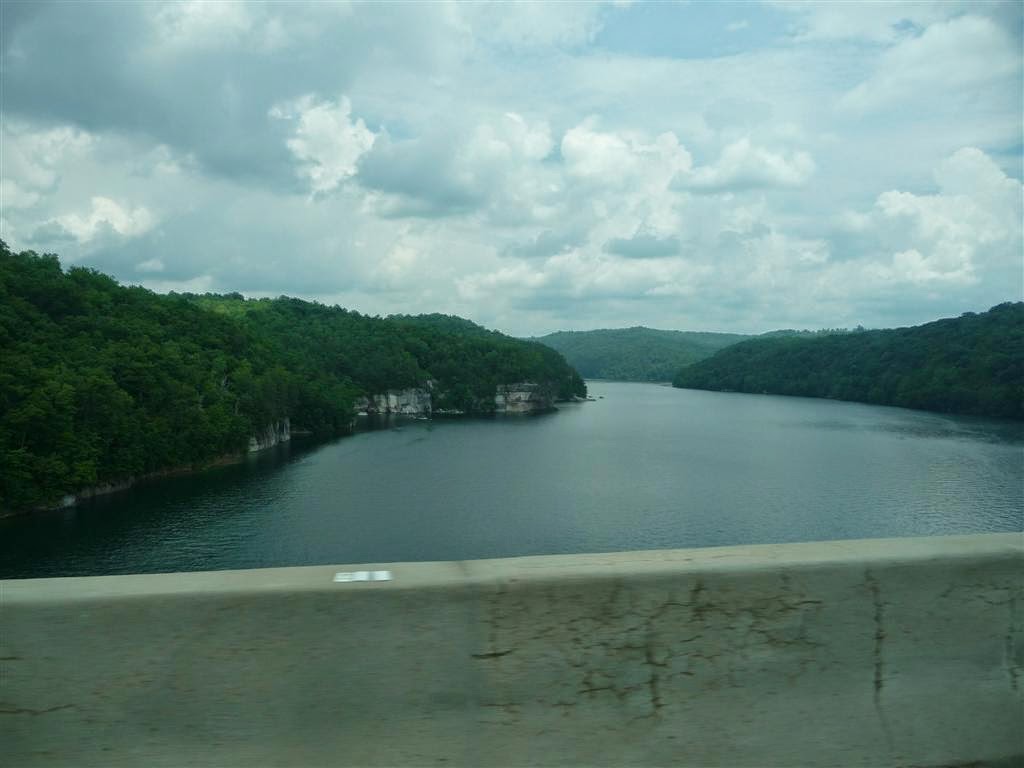 We stopped briefly in Summersville so I could wake up a bit. Then we drove over Powell Mountain and continued on to I-79. 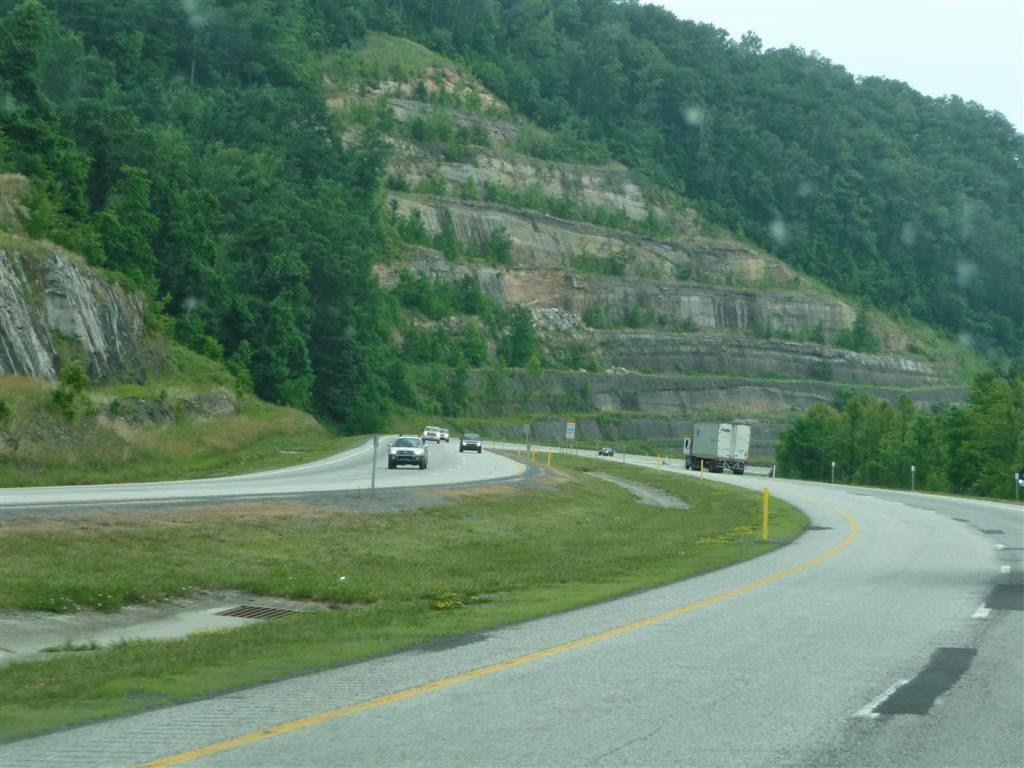 US 19 (Mountaineer Expressway) over Powell Mountain 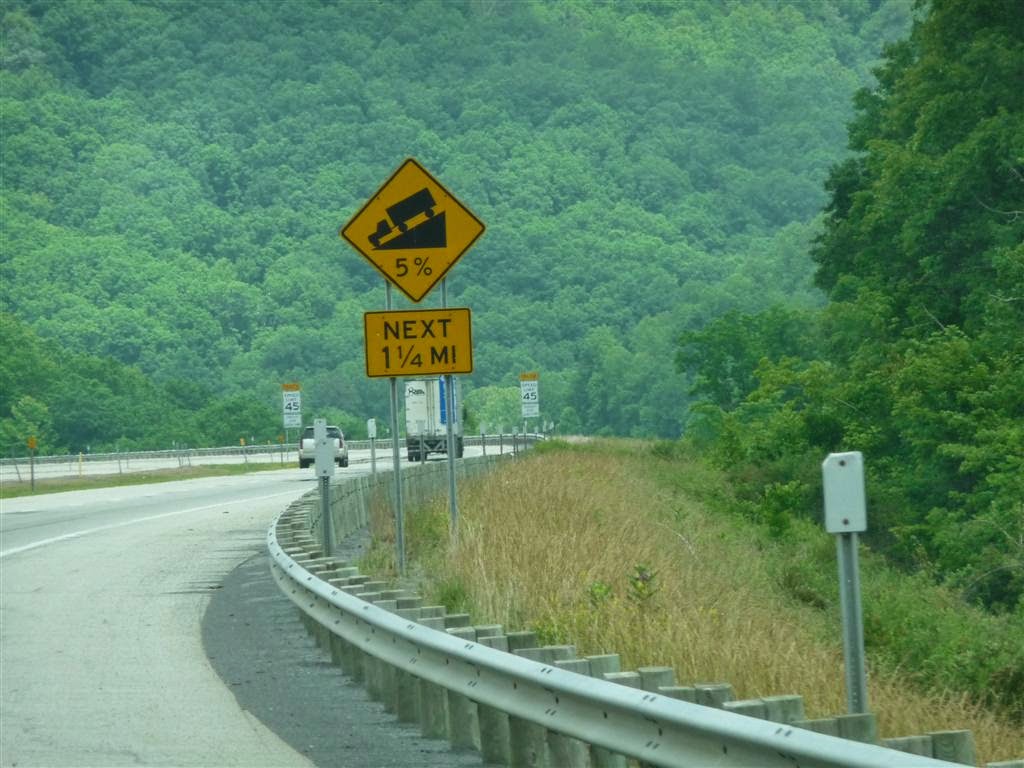 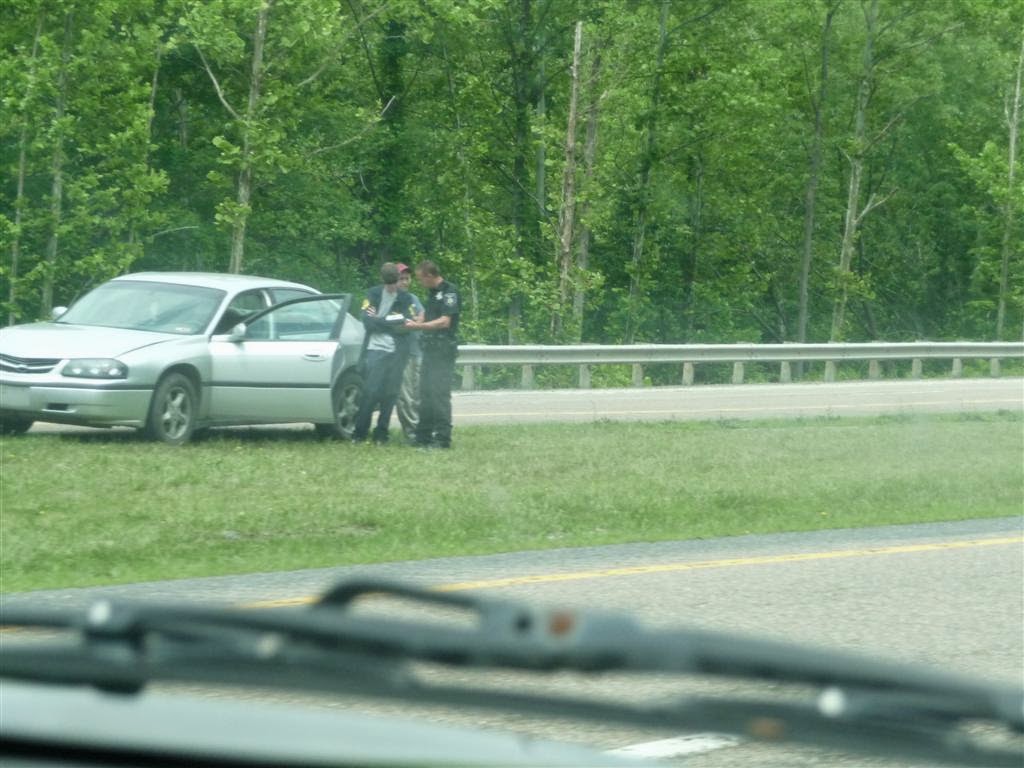 Some unlucky soul getting cited on US 19

Finally, we reached Weston about 4:15 PM. After fueling up, we arrived at the Super 8. Biker & Chery, Nepper & Yollande, Don R & Tina  and Terry A were already there. We carried the overnight gear inside. Soon after, Ray & Mary Ann, Jack & Cathay, Terry D and Terry E arrived. Then it started to rain. Hard, complete with thunder and lightning. The area was under a flash flood watch until 6:00 AM tomorrow. 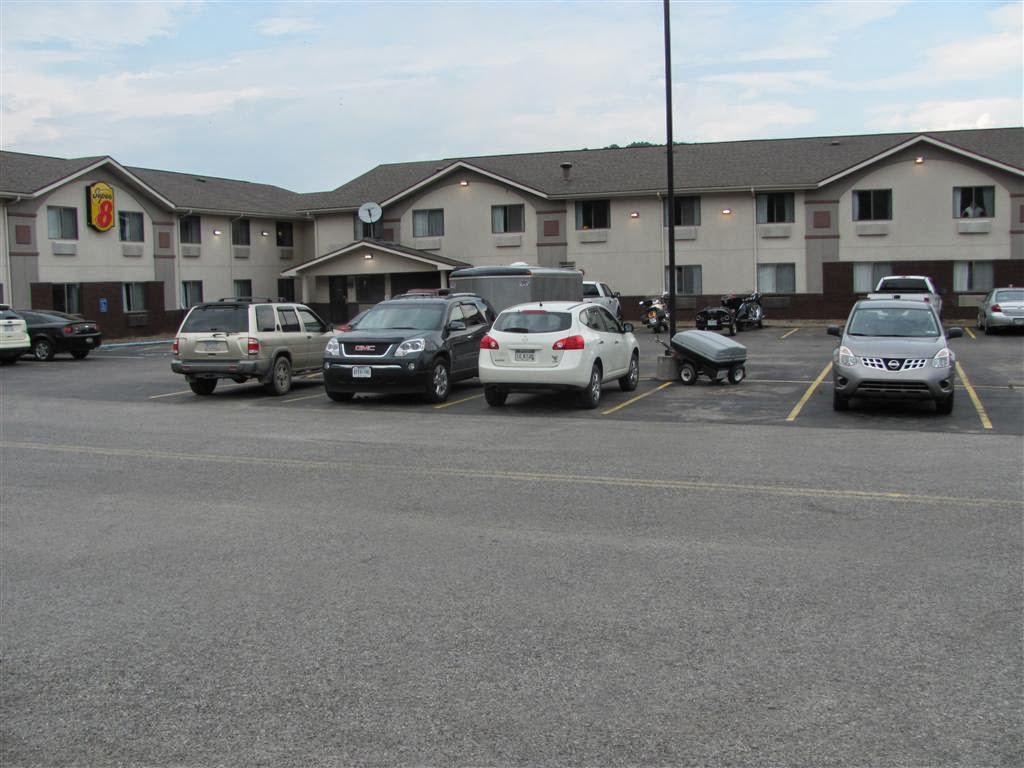 Free coffee in the lobby 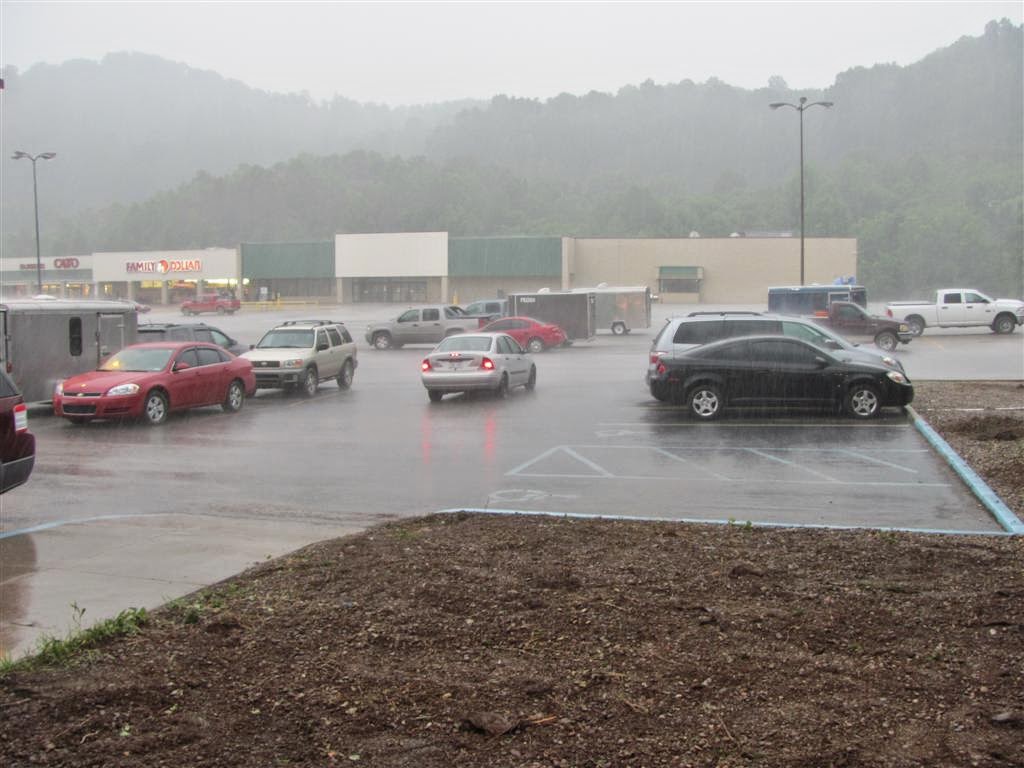 About 6:00 PM, we all walked over to the Peking Chinese Buffet for supper. It was OK but I restrained myself and didn't feel over-stuffed when I was done. Then we went back to the hotel where I blogged while Sandy went shopping in the strip mall. She finally managed to find a set of running shoes that fit and a pair of camo Crocs.

As I write this, there has still been no word from Rob's group or Danielle and Percy. It is now dark and I hope this just means that they have decided to lay over somewhere due to the weather. Sandy and I plan to leave at first light tomorrow and run the entire 660 miles back home. Others have different plans. 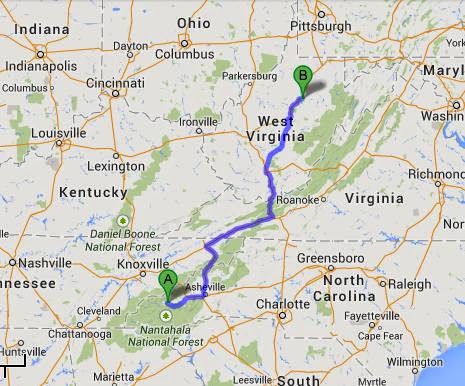