As I mentioned in yesterday's post, the organized group ride was cancelled for today. Most people felt that they wanted to recharge their batteries before heading for home tomorrow morning. So today was unstructured.

One thing that was on the agenda for some today was a visit to Wheels Through Time, a vintage motorcycle museum over in Maggie Valley. Some of us weren't in a rush so Blaine led an early  group over the ridge, a ride of about twenty miles. I left later and led Biker, Don R. and Mike the same way. As we were leaving Bryson City, I had to pull over because all the police cars in the area were hightailing it towards Cherokee with blue lights flashing. We never did find out what that was all about. We caught up with the others at Country Vittles, a favourite Maggie Valley breakfast spot. 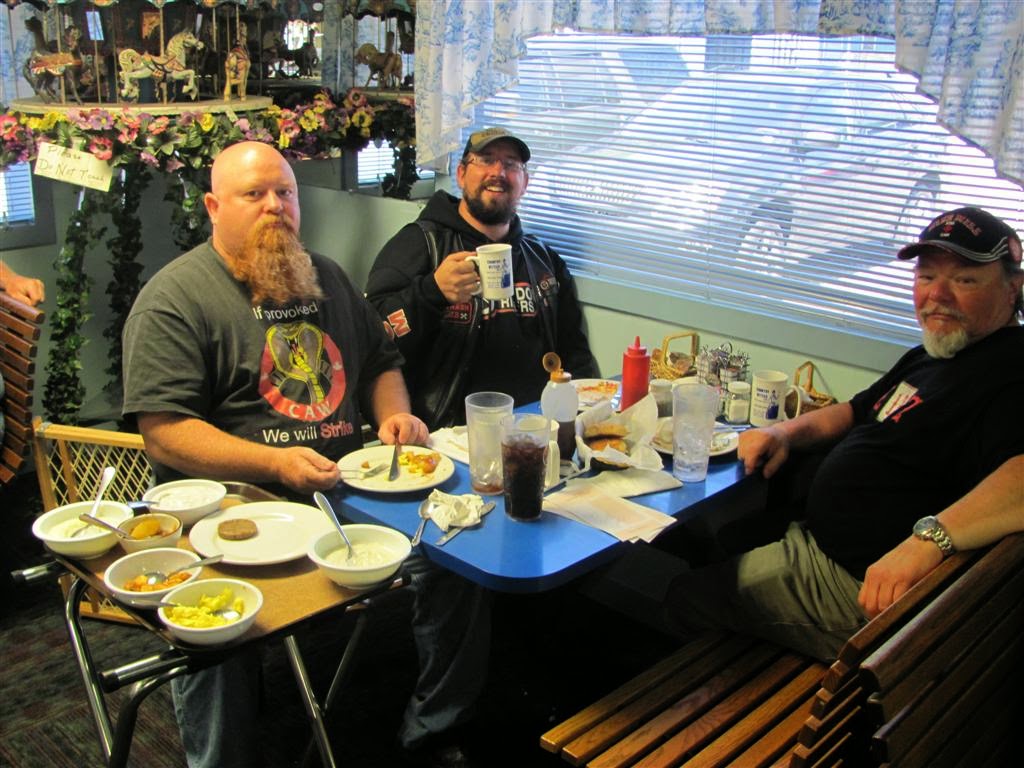 Don M., Paul and Rick having a Country Vittles All You Can Eat Family Style Breakfast 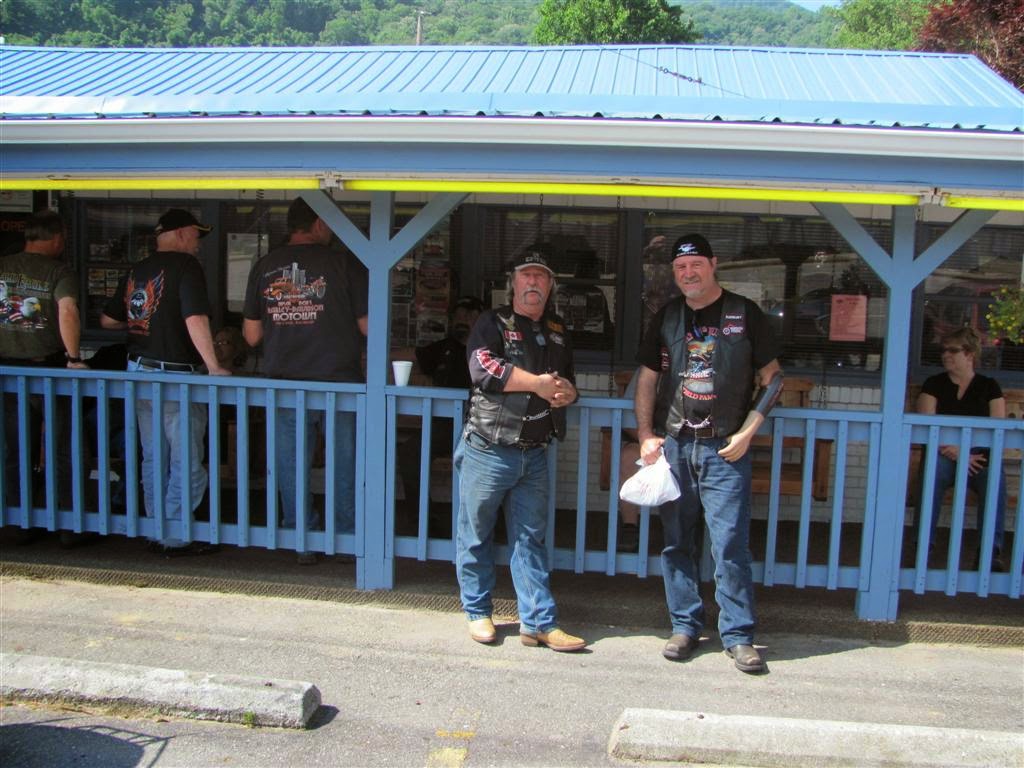 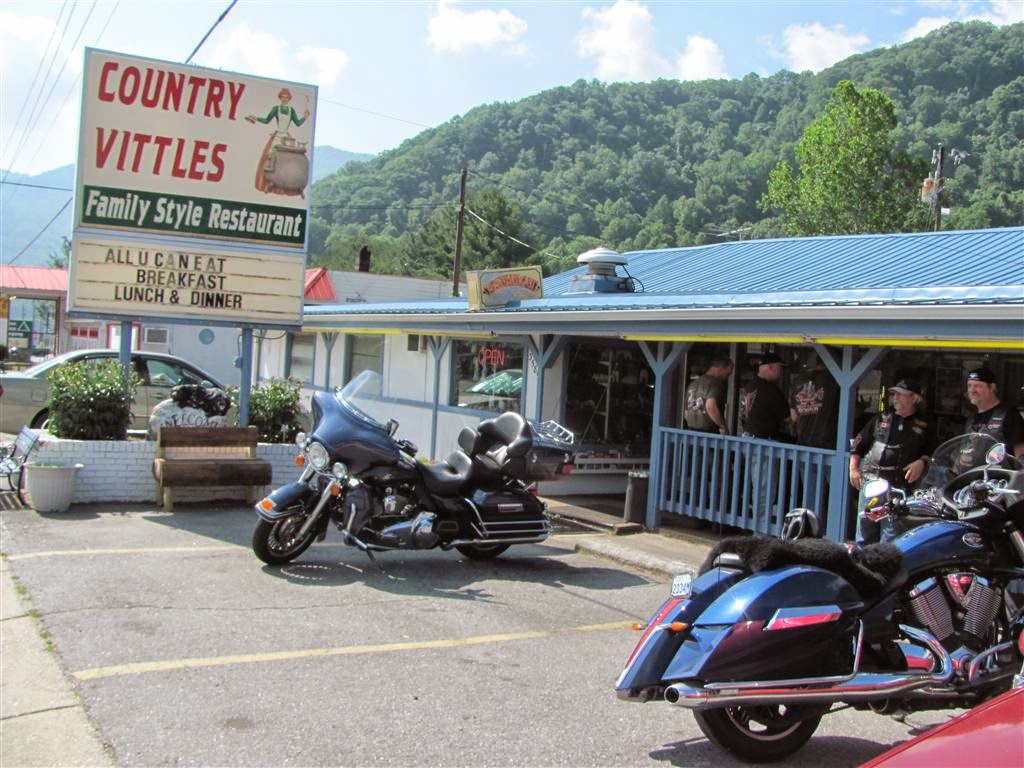 A good spot to eat 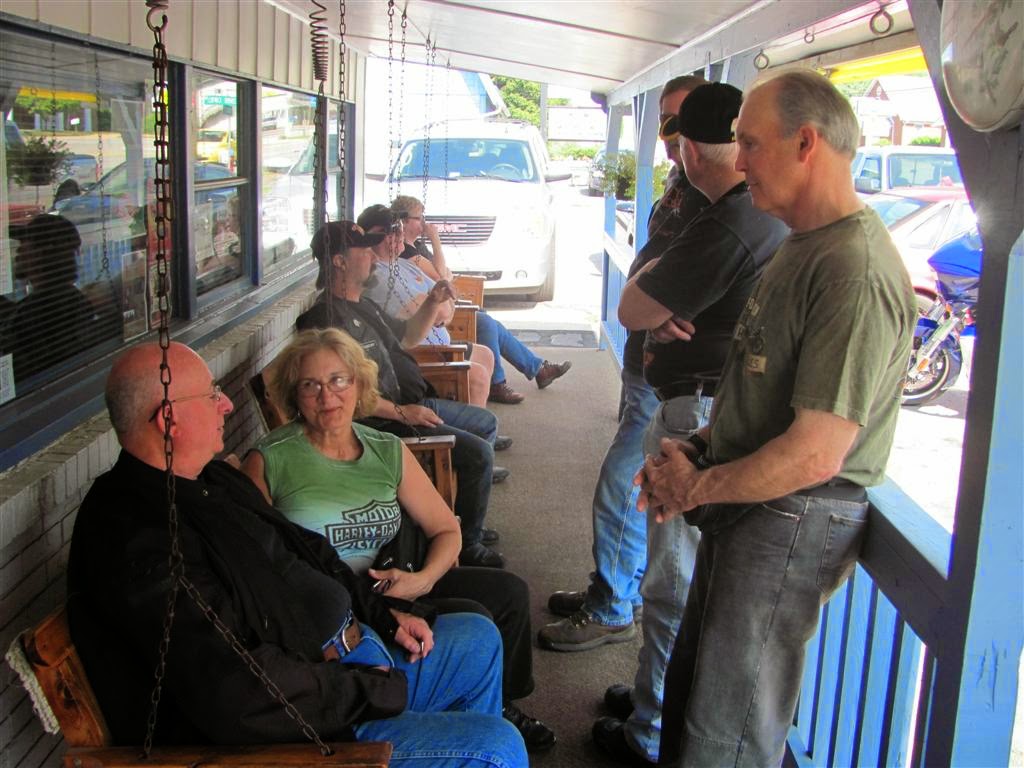 Biker and I escorted Don and Mike to Wheels Through Time, where others had already arrived. Neither of us went in because we had been there before. 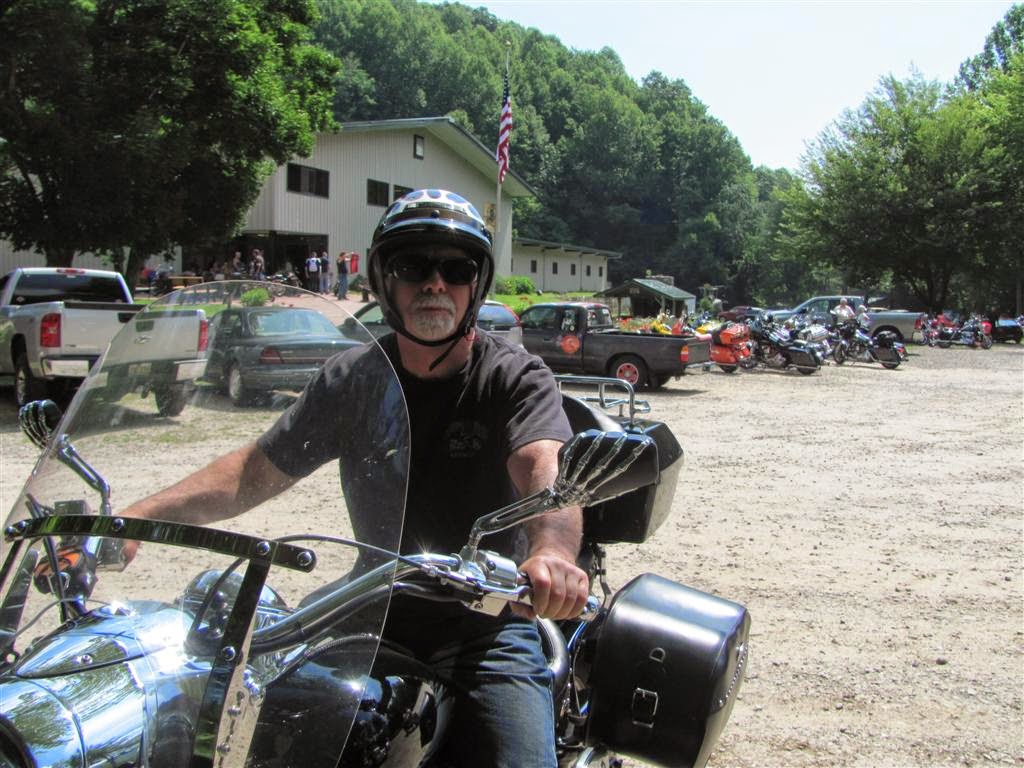 Biker at Wheels Through Time 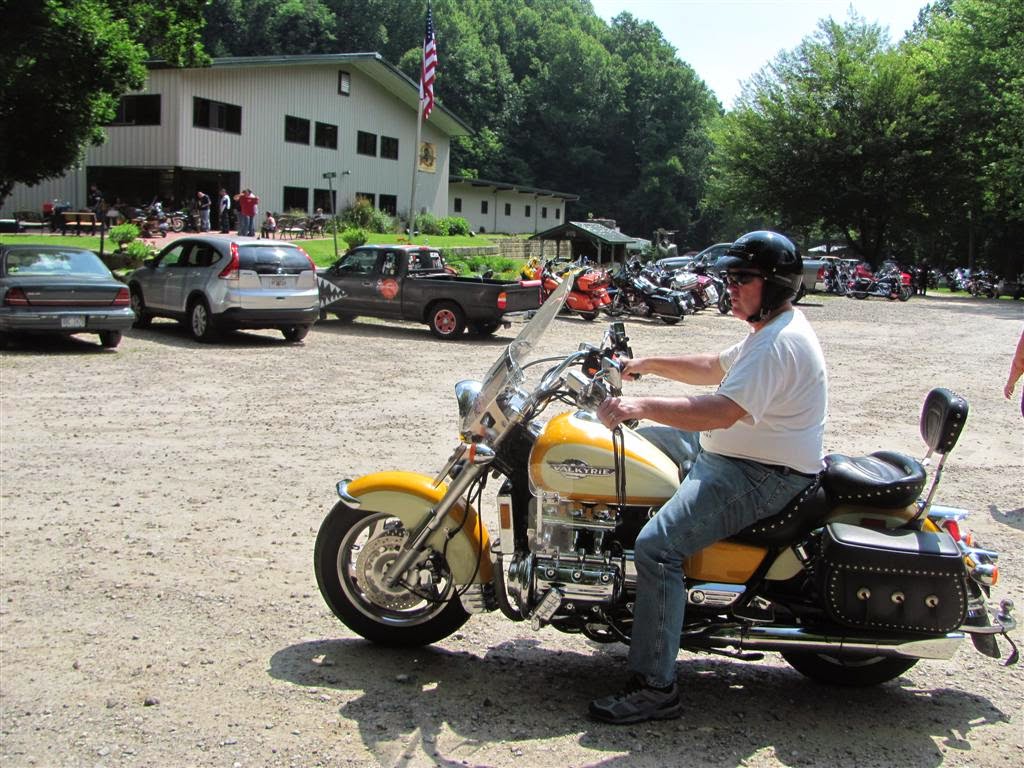 Terry A. at Wheels Through Time

Biker and I fueled  at the Shell in Maggie Valley and then started back up US 19 to Soco Gap. We were following three vehicles by the time we reached the passing lane near the  top. The second car pulled into the right lane but the lead car stayed in the left, as did the pickup truck running third. They paced each other, not letting us by. This was the last chance to pass before the winding descent into Cherokee and I was steamed. Finally, the car in the right lane got a little ahead allowing Biker and I to slip through at the last minute. The offending car was driven by a young lady who apparently did not have a care in the world. Or a clue, either.

We got back to Two Rivers just before noon. I took Sandy to Mickey D's in the truck to get smoothies for her and Tina. The face at the Drive Thru window startled me a bit. 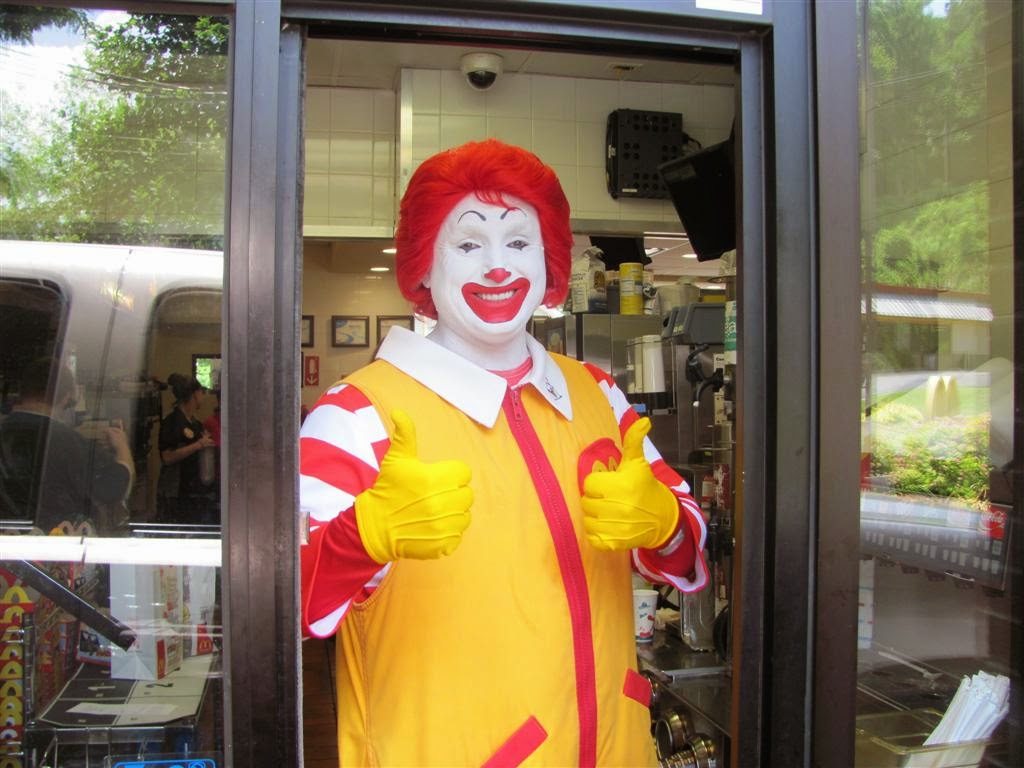 Back at the motel, I posted bills and did some MS Society work. There were clouds building on the horizon, so we all hooked the trailers up, packed the big suitcases and loaded the bikes. It was a good thing we did because the rain came down heavily during the afternoon. Later, it cleared and we had a pleasant evening.

Blaine and Kathy put on a supper for us for a nominal fee. We had all the hamburgers, hot dogs, beans and potato salad that we could handle. As if that wasn't enough, we had three kinds of cobbler (blueberry, apple and peach) with ice cream for dessert. They were cooked in outside Dutch ovens using hot coals from the grill. I have to say that Blaine and Kathy have been the most awesome hosts. And very nice people to boot. I will be suggesting to club members that they put reviews on Tripadvisor when we get back. Sandy and I are looking forward to retunring in early August for VROC WWR8. We even have the same room reserved. 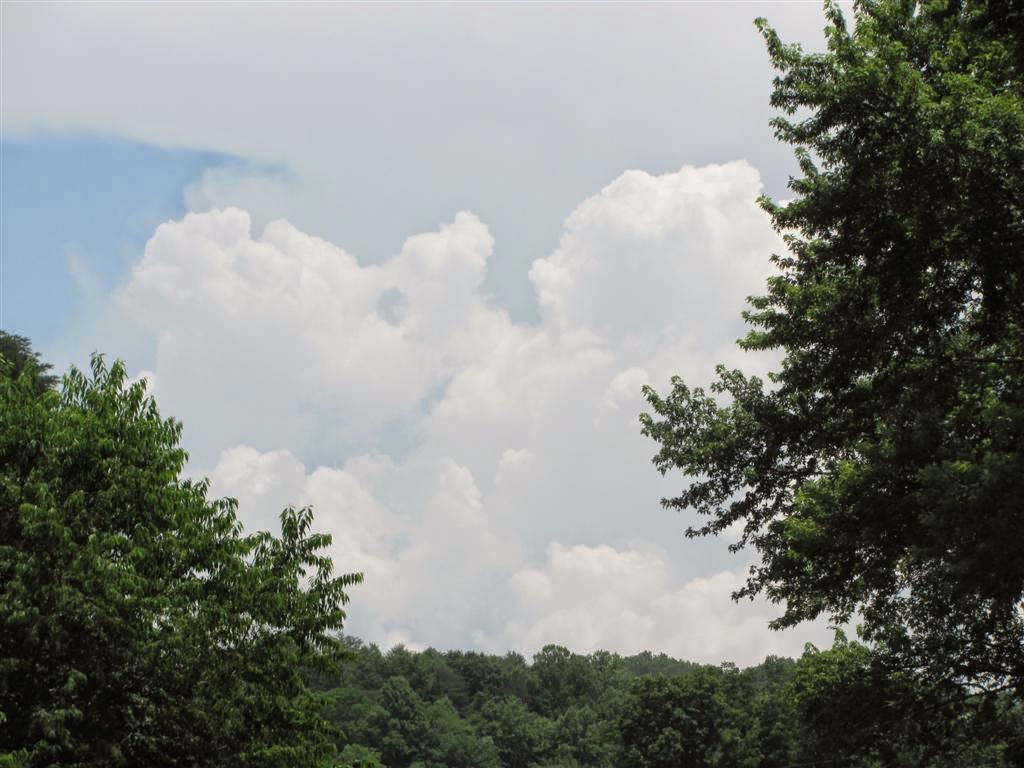 The clouds before the rain 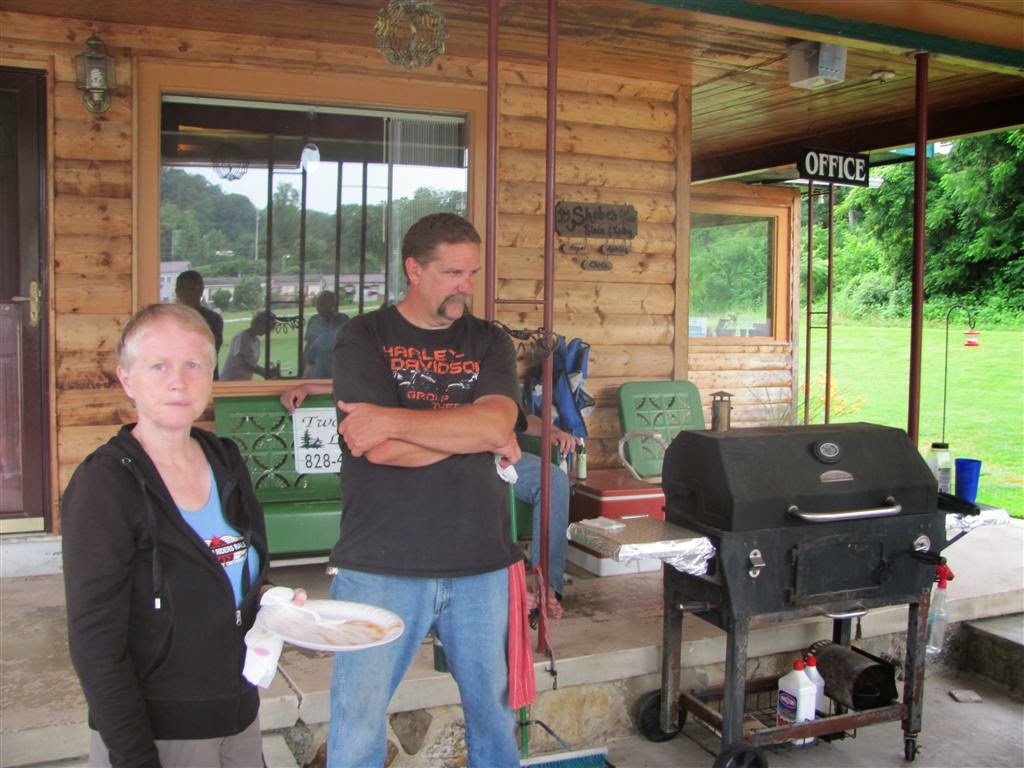 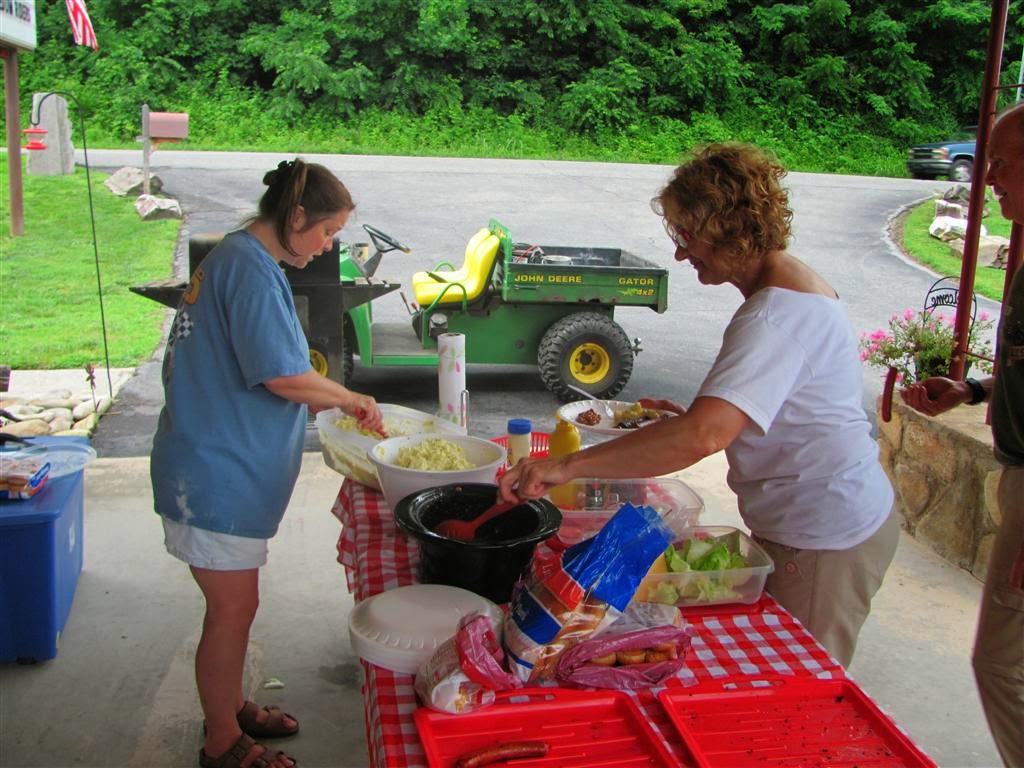 Kathy replenishes the potato salad as Danielle gets some beans 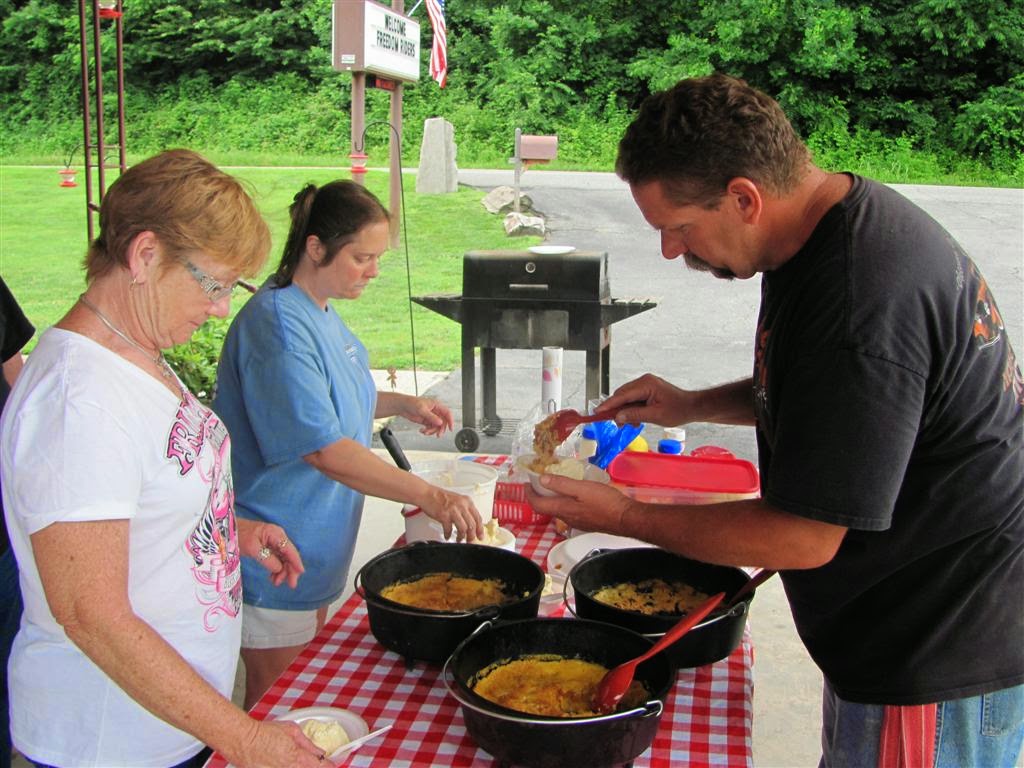 Cathay getting some cobbler

The evening was quiet. People were subdued in anticipation of the trip home tomorrow. It seemed like the trip had been a success thus far so my part was done. It was a real pleasure to share one of my favourite areas with my Ontario motorcycle family. 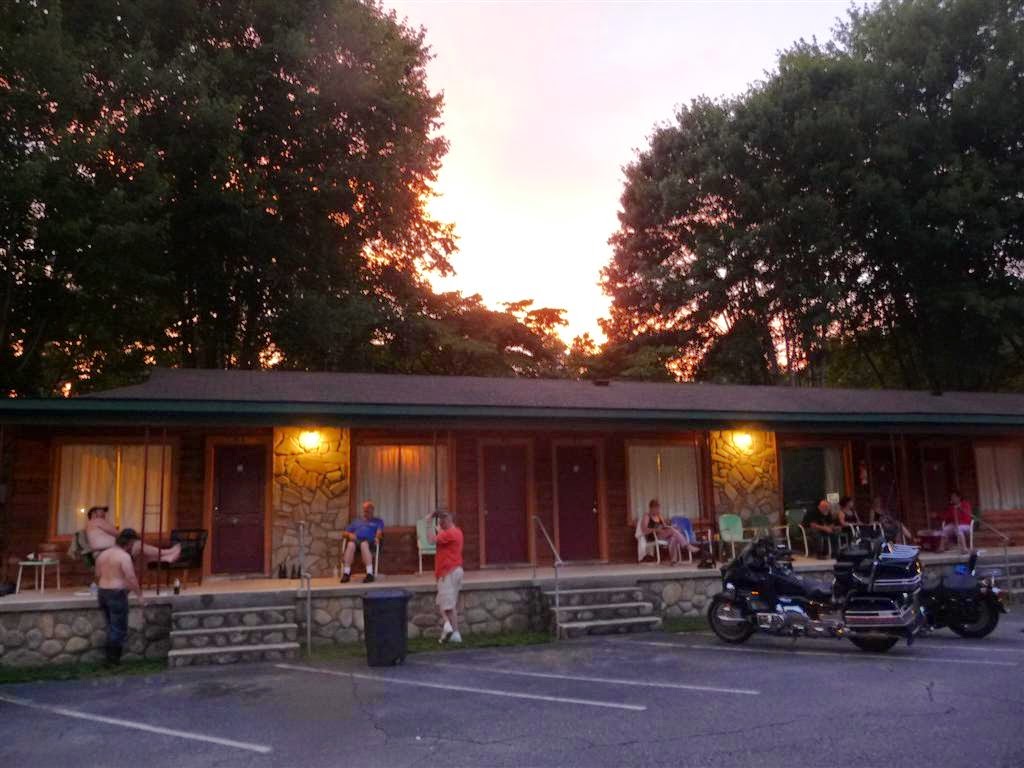 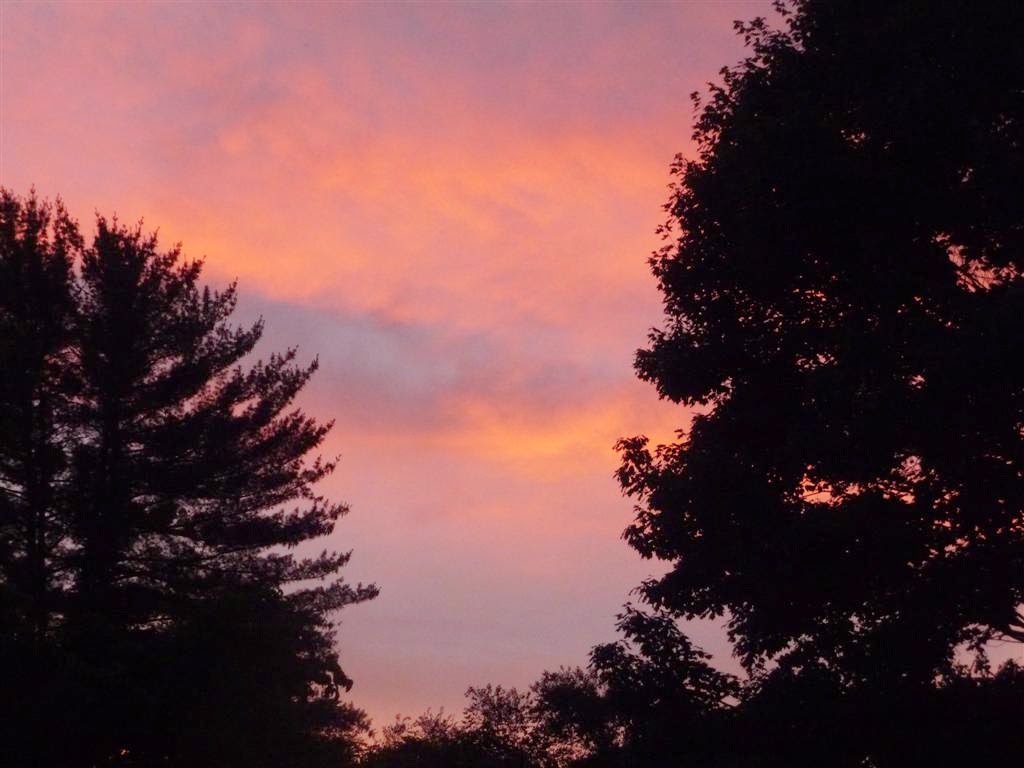