There was no dew at the Two Rivers Lodge this morning. Biker and I left just after 8:00 AM to ride to Erwin, Tennessee and meet the inbound Freedom Riders. Gary decided to stay back due to a toe he injured on the Devil's Whip a couple of days ago, and said he would look after the ladies.

Biker and I stopped for gas just past Sylva on US 74. We had to come out westbound and then flip over to the Eastbound side at the Sylva exit. After reaching I-40, we continued east towards Asheville. There was an unscheduled stop at Canton to remove a plastic garbage bag that Biker had run over and was stuck to his Vulcan. 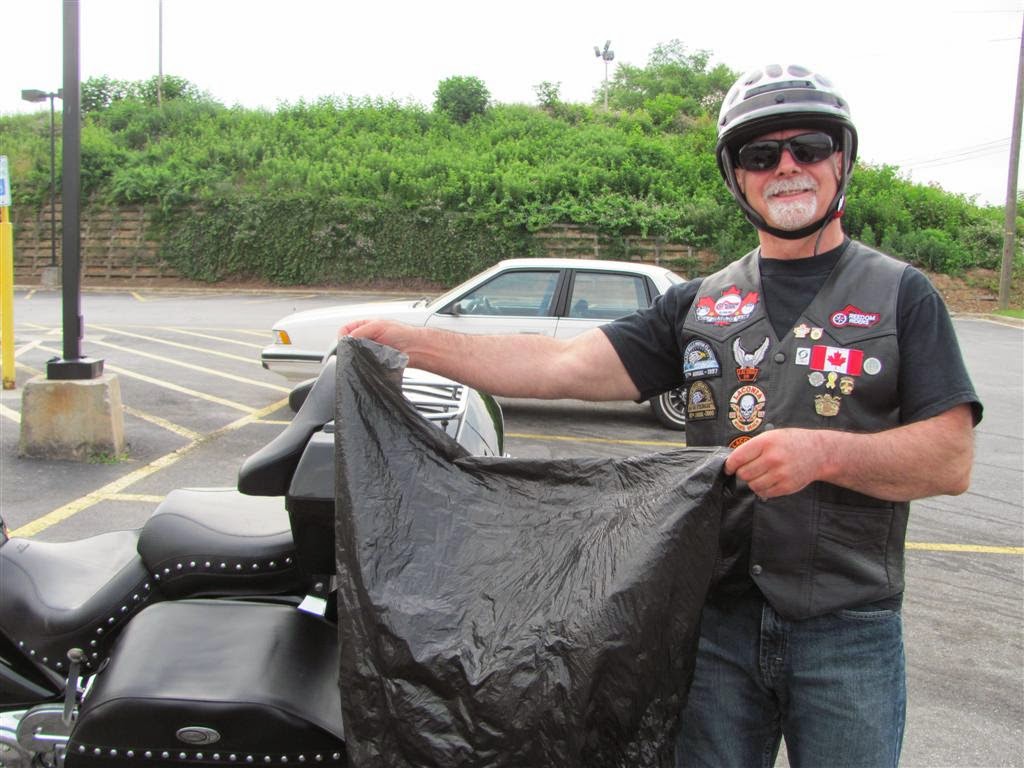 We rode around Asheville on I-240 and took the ramp for I-26 North. It was 24C and the skies were partly cloudy. On the climb through Buckner Gap and Sams Gap to Tennessee, there were some darker clouds to the west, although it was looking good again as we descended to Erwin and the McDonald's rendezvous point.

Terry, Nepper and Yollande we already at the meeting point. Biker and I gassed up (for $3.36 regular) and found we used the same amount of fuel to the thousandth of a gallon, although his was high test. The group arrived in several sections and I suggested they have something to eat before we rolled on. The riders decided who was going to go directly to the motel and who was going to follow me up onto the Parkway. For the BRP crew, the next food stop would be at Two Rivers.

Before we left, it started spitting rain and some suited up. I didn't. The Parkway group left first and started up the climb to North Carolina. We hadn't gone very far when the sun broke through and it warmed up. In the gaps, there was no sign of the earlier dark clouds. I had planned a final gas stop after we got off I-26 past Asheville, but made an unplanned stop north of the city for fuel and suit removal.

At the gas pumps where we stopped, a young couple were getting someone to boost their truck. At the pumps. I kept my camera handy to capture the possible fireball, but they were lucky. 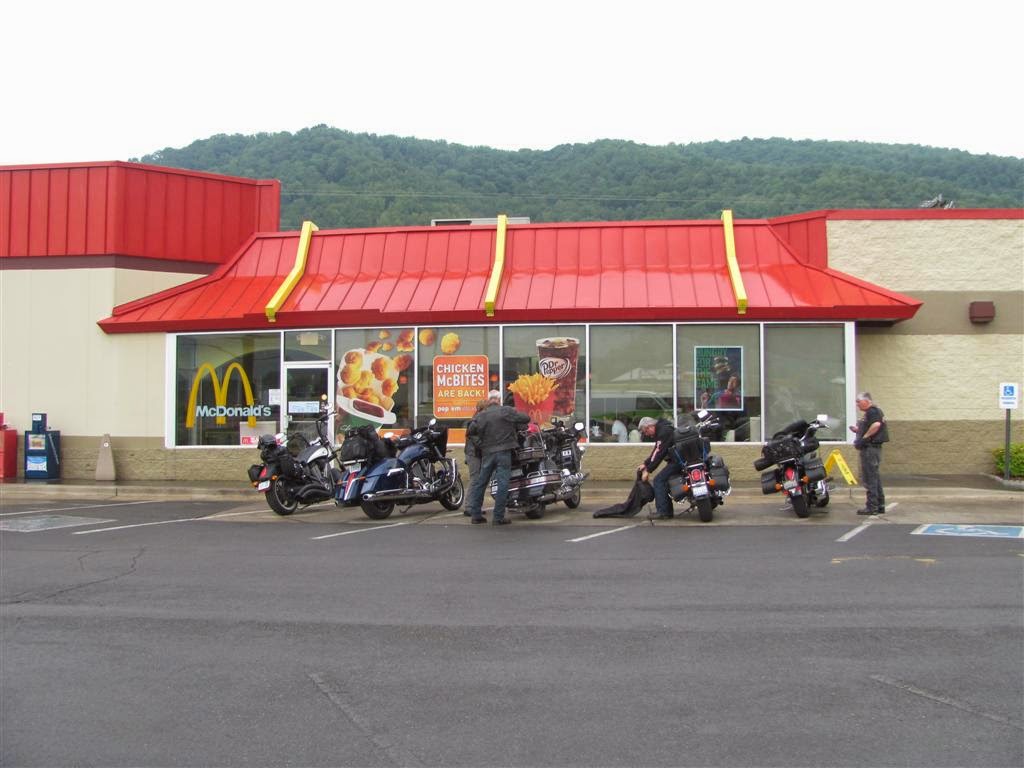 Suiting up in Erwin Tennessee 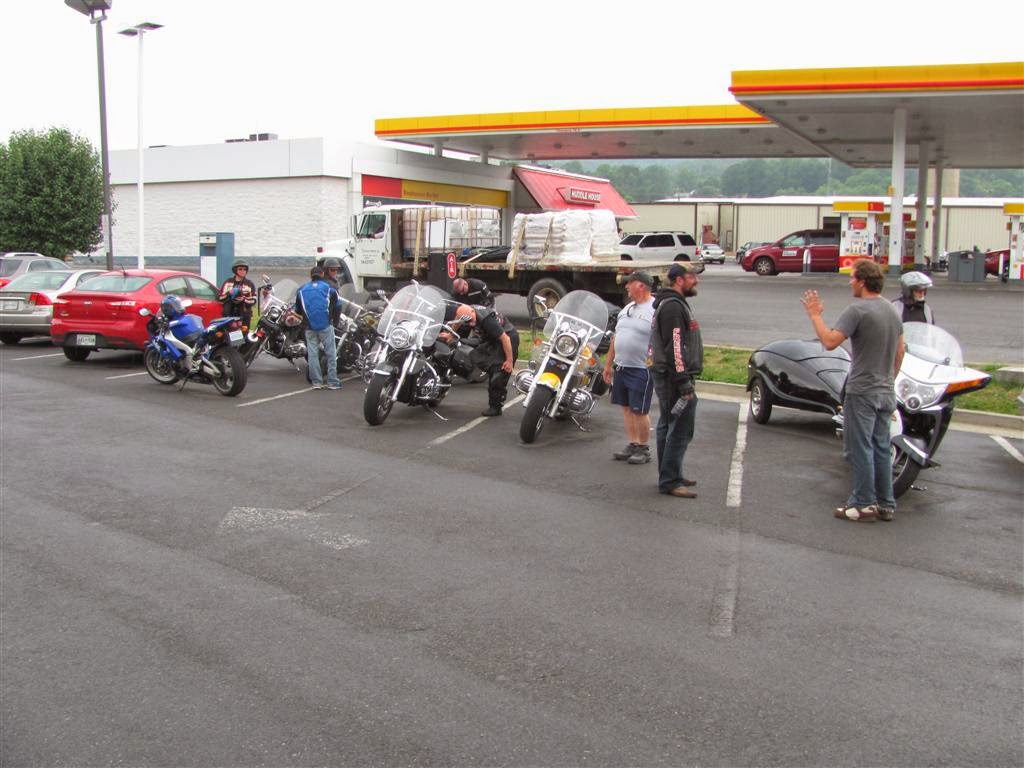 More riders getting ready to leave 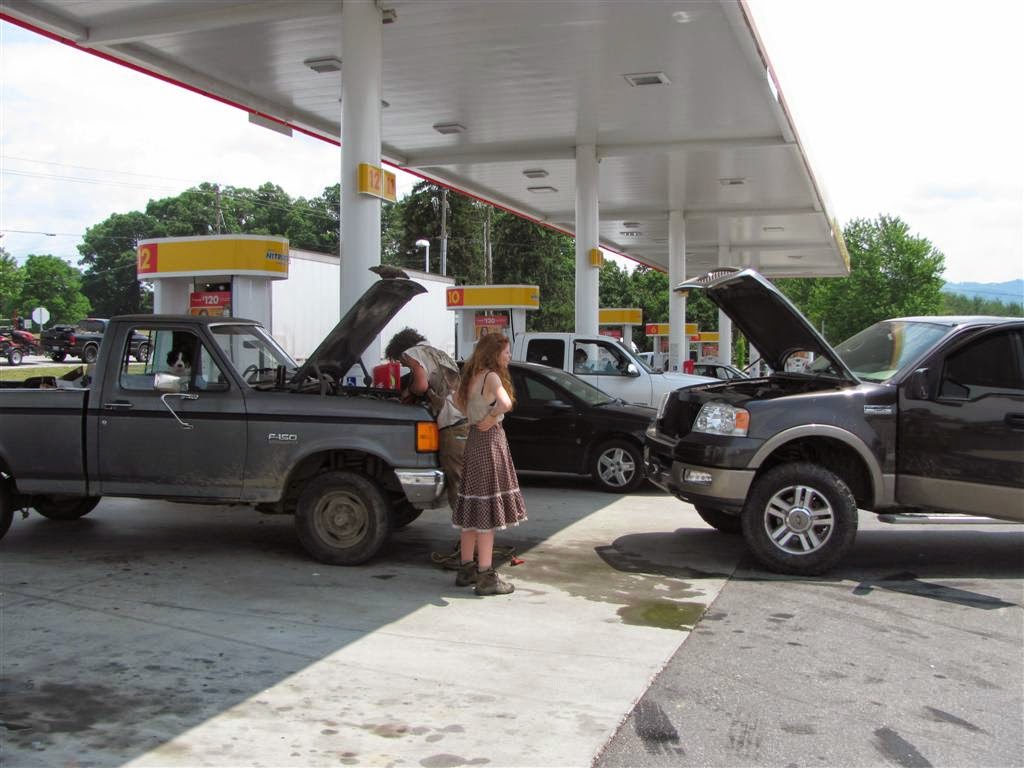 Boosting the truck at the pumps

Following I-26 around Asheville, we took Exit 33 to NC 194. Just before we got to the Parkway entrance, it started to spit rain again. I hoped that as we headed southwest, we would get out from under it. We did from time to time, but it dogged us all the way. I took it easy on the wet sections and everyone kept up quite well. I wasn't riding in the zone today, possibly because I was worrying about everyone else. The rain was coming down a bit harder when I pulled off at the Pisgah Inn, but stopped when we did.

At the Inn, we met three Harley riders from Welland who were riding the length of the Parkway. They needed fuel and would be heading down US 276 to Waynesville. They asked about food and I suggested Bogart's. 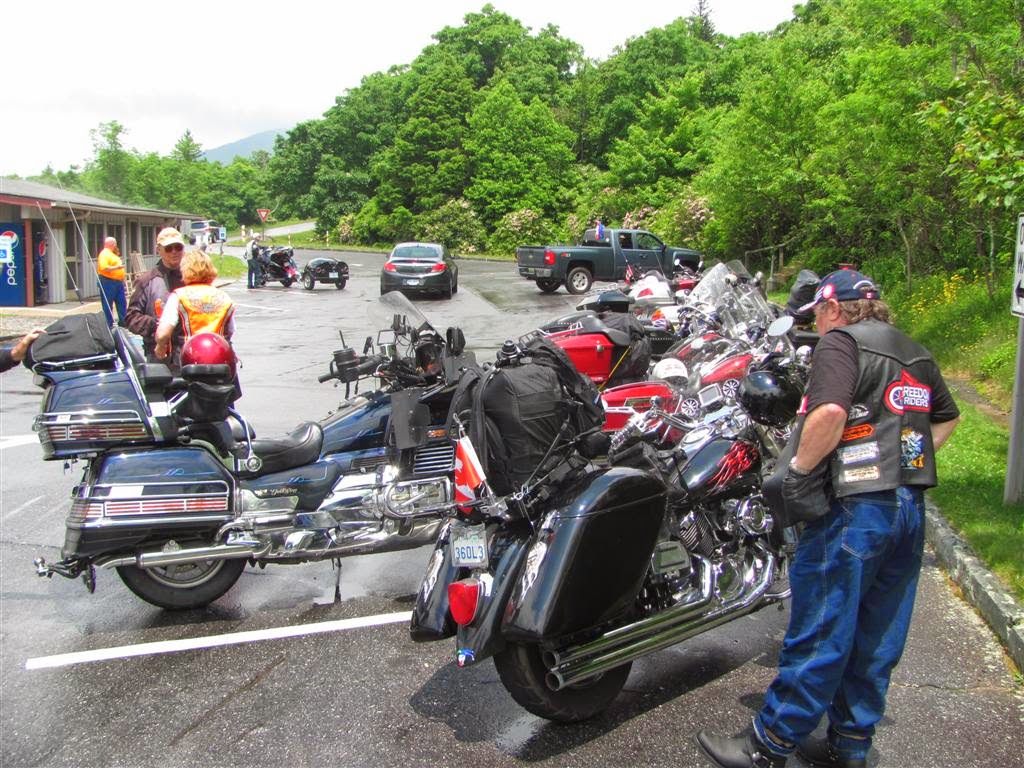 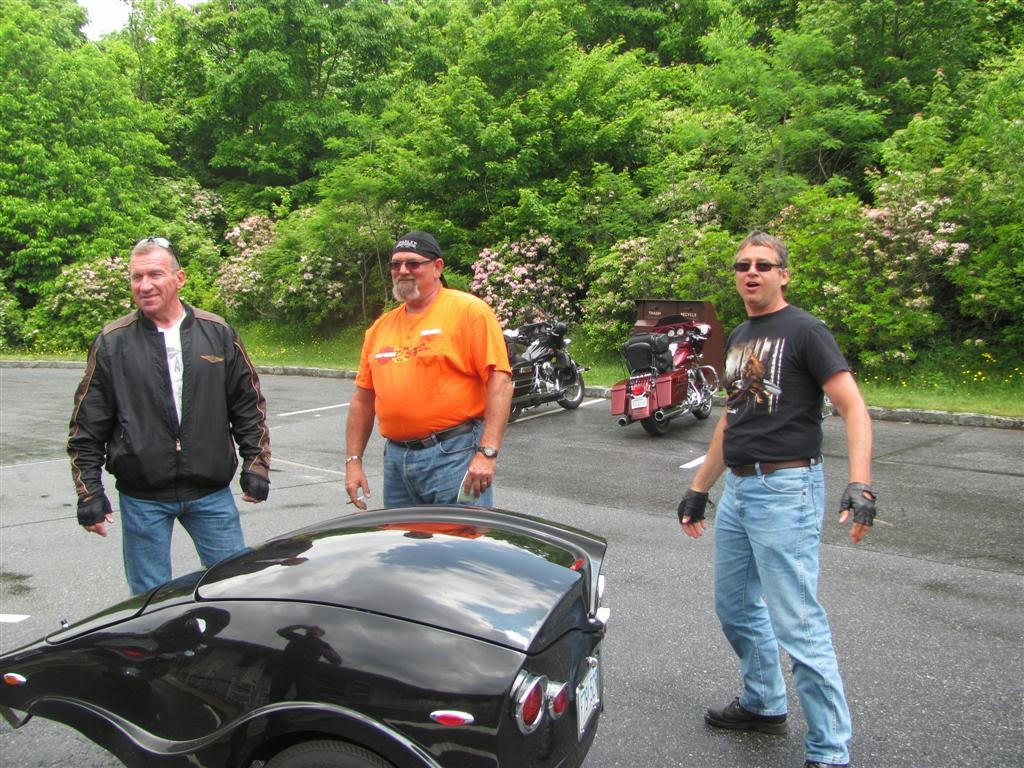 We continued on, running through patches of wet and sections of dry road. The next stop was at the highest point on the Parkway, where we got a group photo. I had planned to ride the Parkway all the way to Soco Gap and run down US 19 through Cherokee to the Lodge, but changed plans here due to the damp conditions. I informed everyone that we would exit at Balsam Gap and take US 74 the rest of the way. 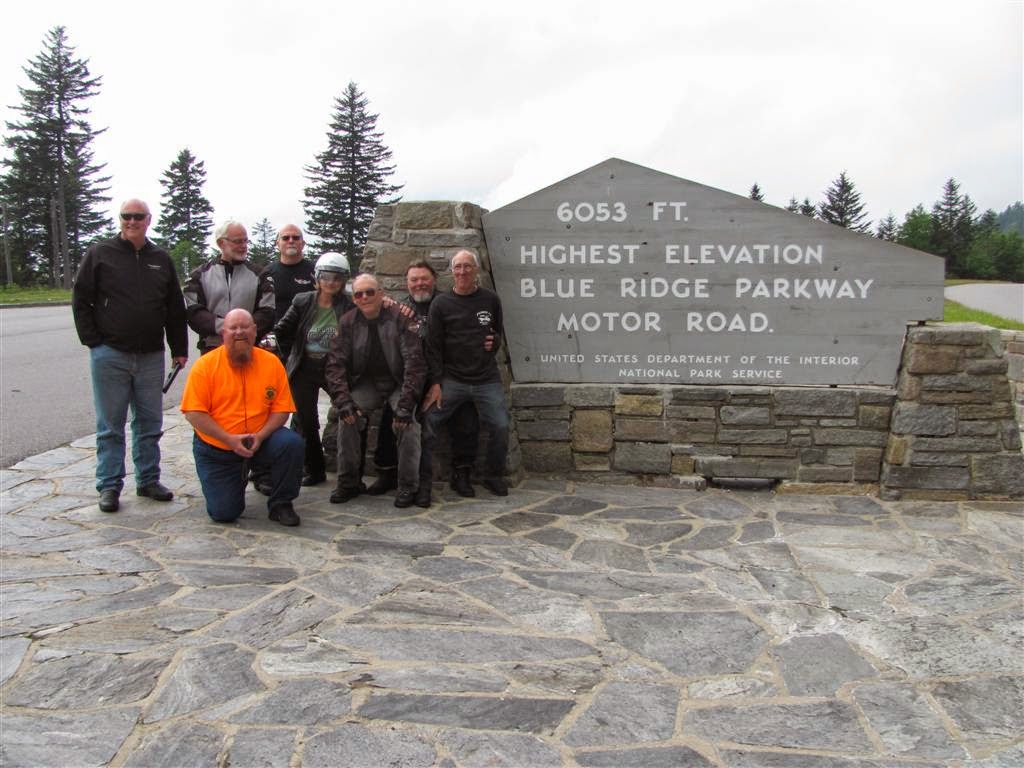 Not long after we pulled out for the last stretch, I saw a change in the sky. I stopped at another pullout and suggested that anyone who wanted to suit up should do so now because things were about to be serious. Some appeared skeptical but some donned their gear. I put my wallet, phone and camera in the trunk but didn't put my own suit on. Not a mile from there, the downpour started. It continued all the way down to Balsam Gap, with me leading at about 25 MPH and barely able to see where I was going. As we exited to US 74, it stopped and the sun came out.

The rest of the ride was uneventful. We arrived at the lodge at 4:30, not long after the direct group. They had stopped a few times. It had rained here but was looking quite pleasant by the time we got in. People got checked in and some of us hit the pool. The last to arrive were Don and Tina, who had left Sudbury Sunday morning towing their bike.

The issue of supper came up. Many restaurants close on Mondays here. Blaine said the Iron Skillet in Bryson City was closed but that Jimmy Mac's was open. Rob and a few headed off first and we got there last. Jimmy's was, in fact, closed. But the Iron Skillet was open and Rob got us set up in the back room there. One server took care of all of us. She did well, all things considered.

While we waited for our food, we discussed tomorrow. The communal eating would be difficult so we decided that people would look after their own breakfast and get fuel. Fed and gassed, the group ride would leave the motel at 9:00 AM tomorrow. Sharp. I finally had my chicken fried steak with mashed potatoes, green beans and coleslaw. It was good and only cost $8.95. 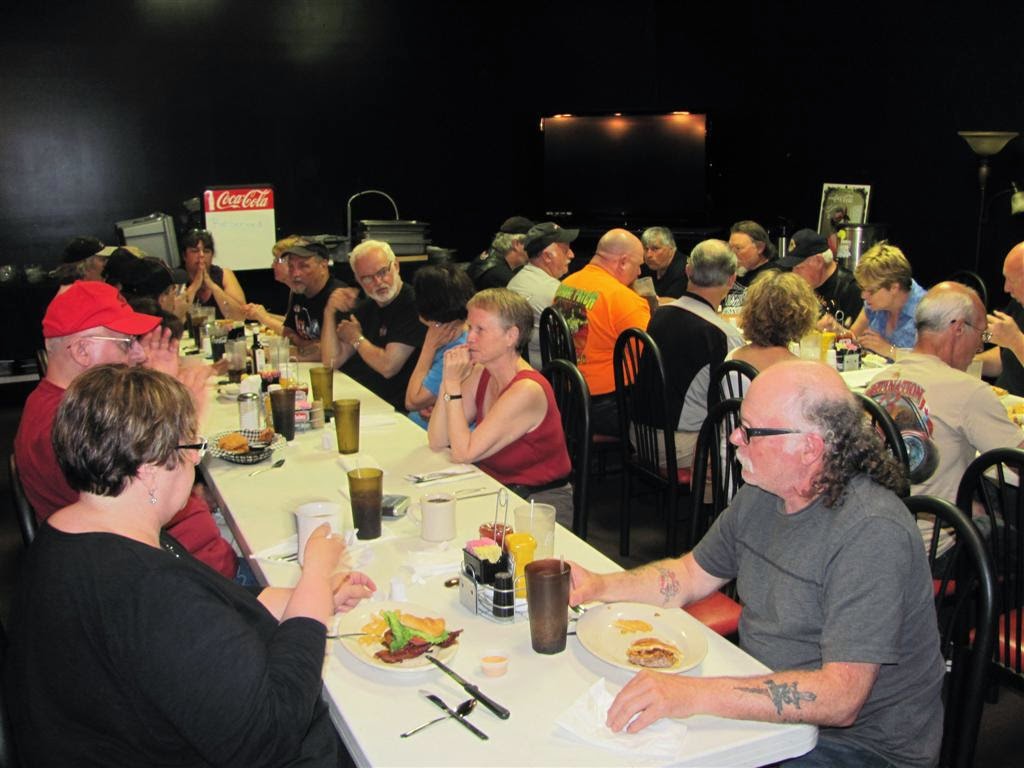 More people than many meetings 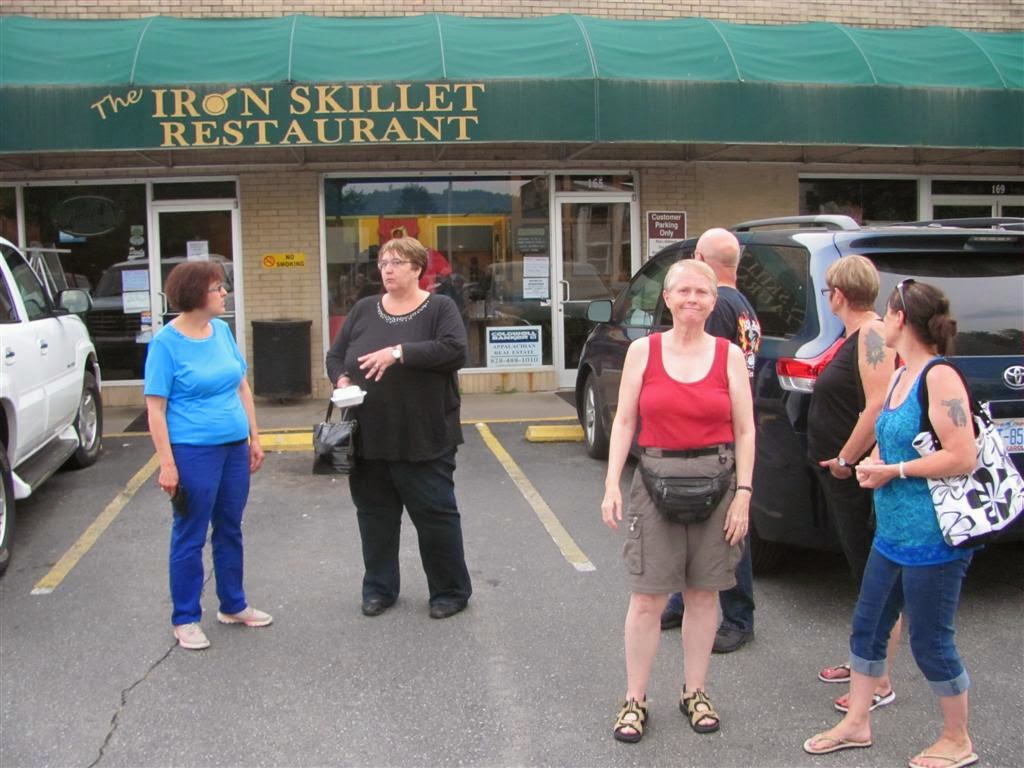 A pretty good place to eat

Back at the motel, people sat out for a while and then slowly filtered off to bed. The last to leave the pavilion were Rob, Paul, Blaine & Kathy (our hosts) and me. It was all of 10:45. 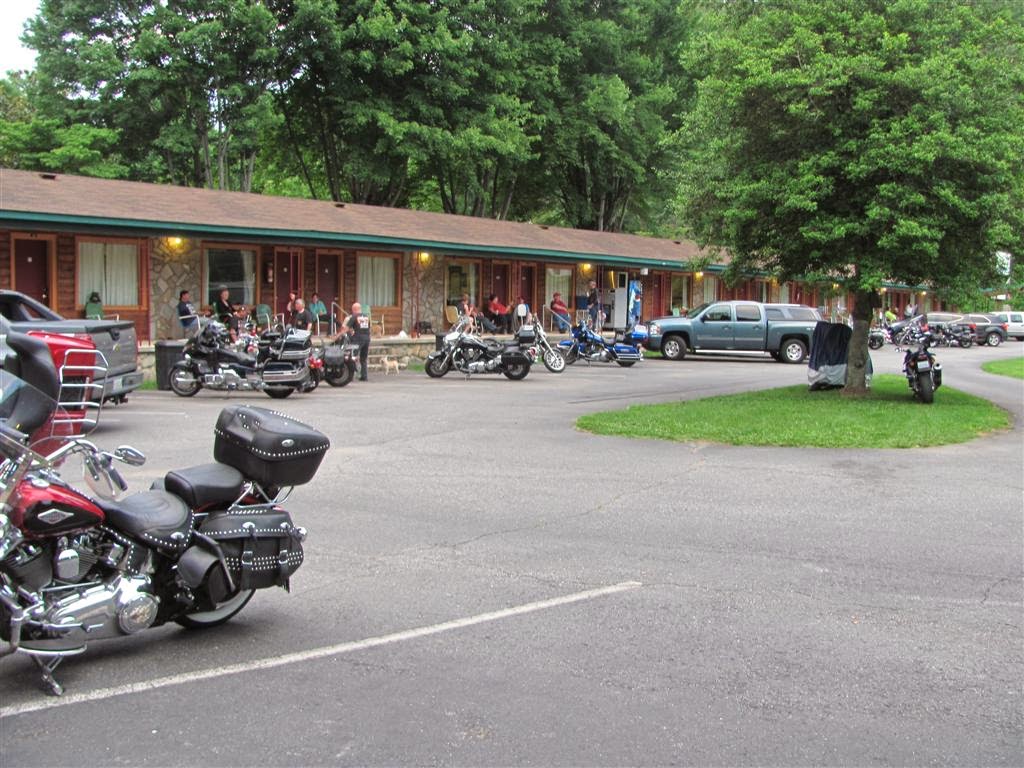 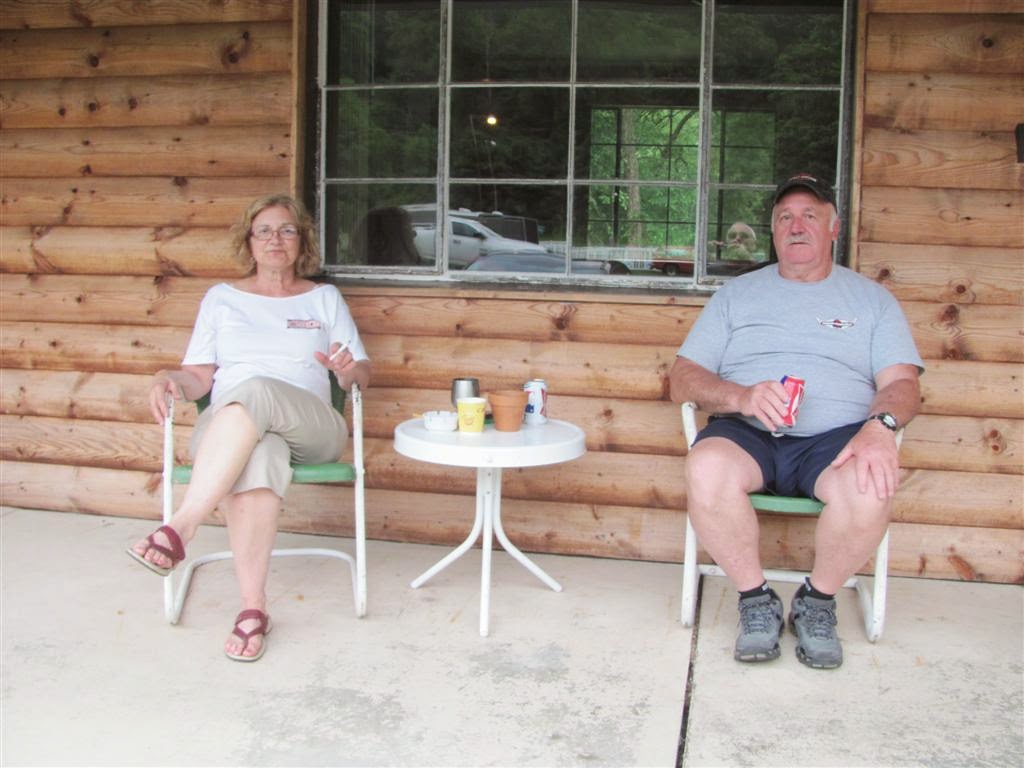 danielle and Roger enjoying the evening 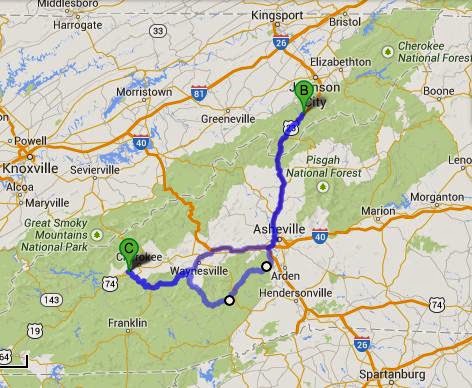