Departure Day Minus One

Having missed the first two planned trips of the year, we were eager to get out of town. The Freedom Riders Annual President's Ride this year would be a little more ambitious than the usual three day weekend, with President Rob setting the club sights on the Tail Of The Dragon on the North Carolina/Tennessee border.

Since I am more familiar with this area than most club members, I have been working on planning this ride for several months.The concept on the way down is that members can travel their own pace but will rendezvous each night for socializing. Once down there, I will be leading three day loops over some of my favourite roads. The total trip will be nine days and over twenty people will be participating. Detailed itinerary.

While the official ride doesn't leave until next Saturday, Sandy and I will be on the road early tomorrow morning. We will be joined by Gary and Dianne, longstanding fellow club members. We will use the extra week to explore some additional roads in West Virginia, Virginia and North Carolina. We will both be towing the bikes in trailers.

With departure looming, this last week has been a scramble. Getting work done for the various organizations, servicing the truck and the trailer wheel bearings, several medical appointments, updating the GPS maps and other tasks made the time fly by. But it all got done, although the GPS update almost brought me to my knees. This morning, we packed the truck, connected the trailer and loaded the bike.

This afternoon, we attended the Freedom Riders Annual Club Bash. This is the only event we have that is closed to members only. The event was held at President Rob's home this year. On Wednesday, a group of us gathered in the evening and set up the big club tent. I took the truck and trailer because I wanted to get a few miles on and then retorque the lug nuts on the trailer wheel we had off to adjust the bearing. We started at 3:00 PM with the monthly club meeting, a rally meeting and a review of the trip plans for next week. 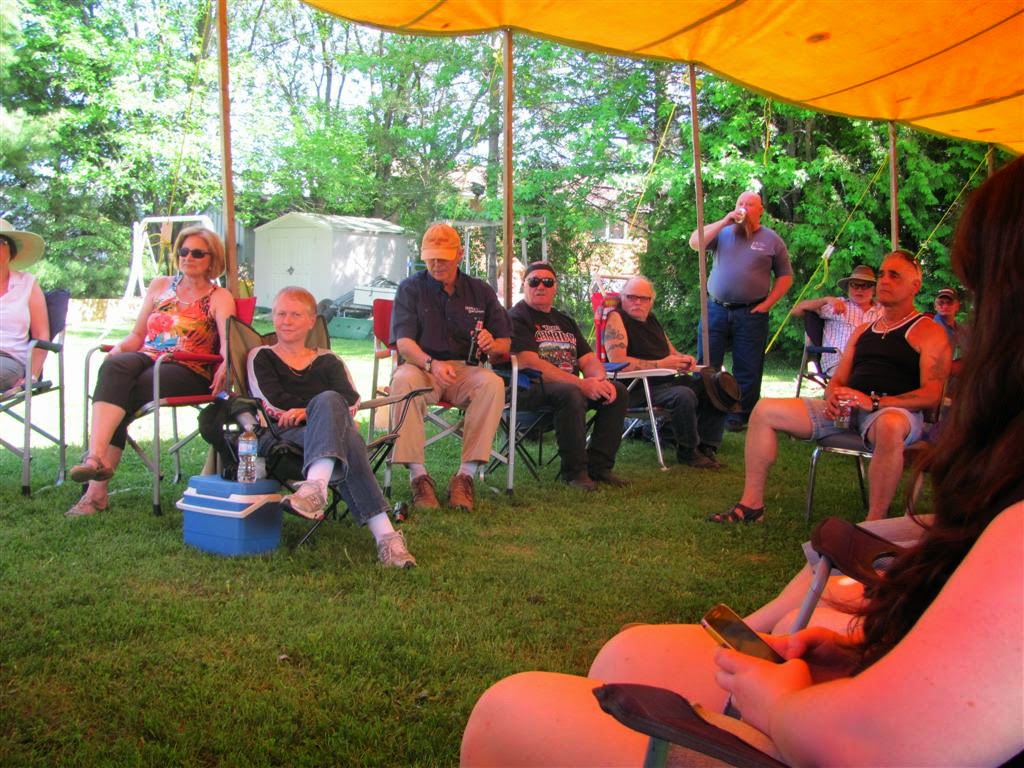 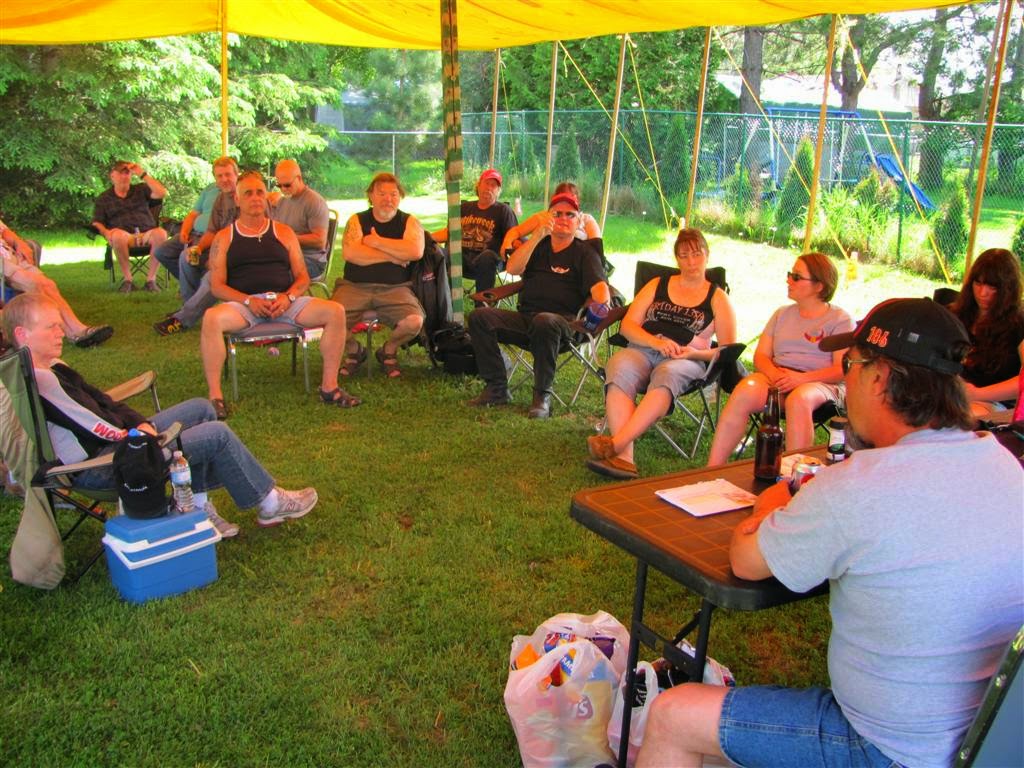 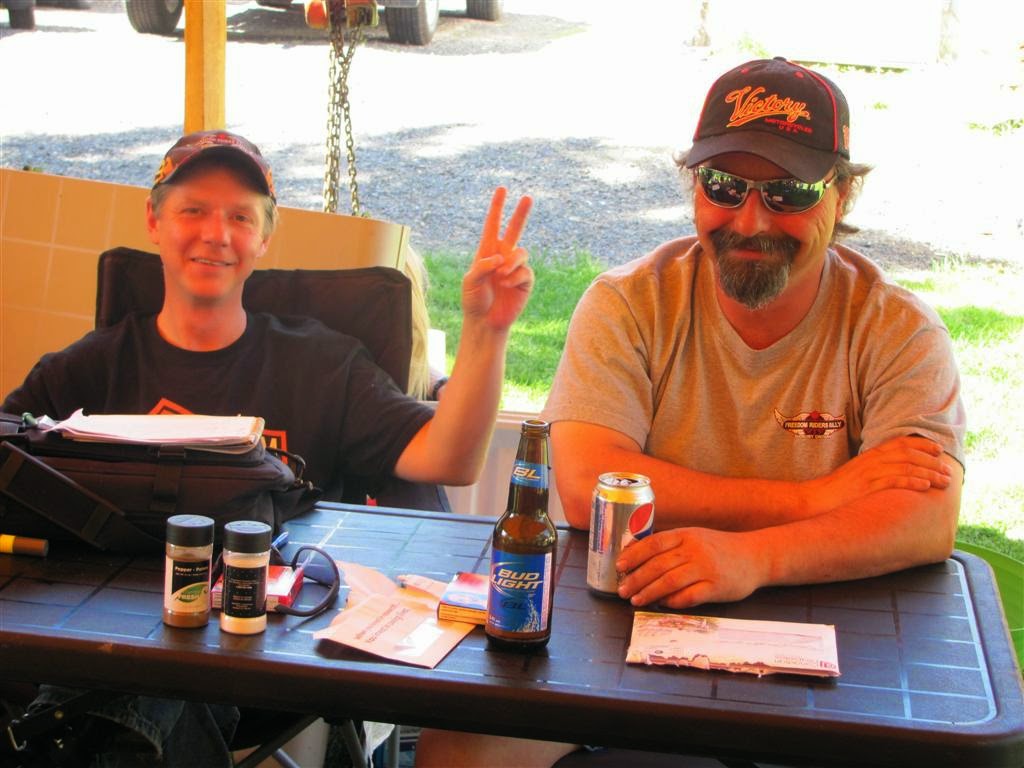 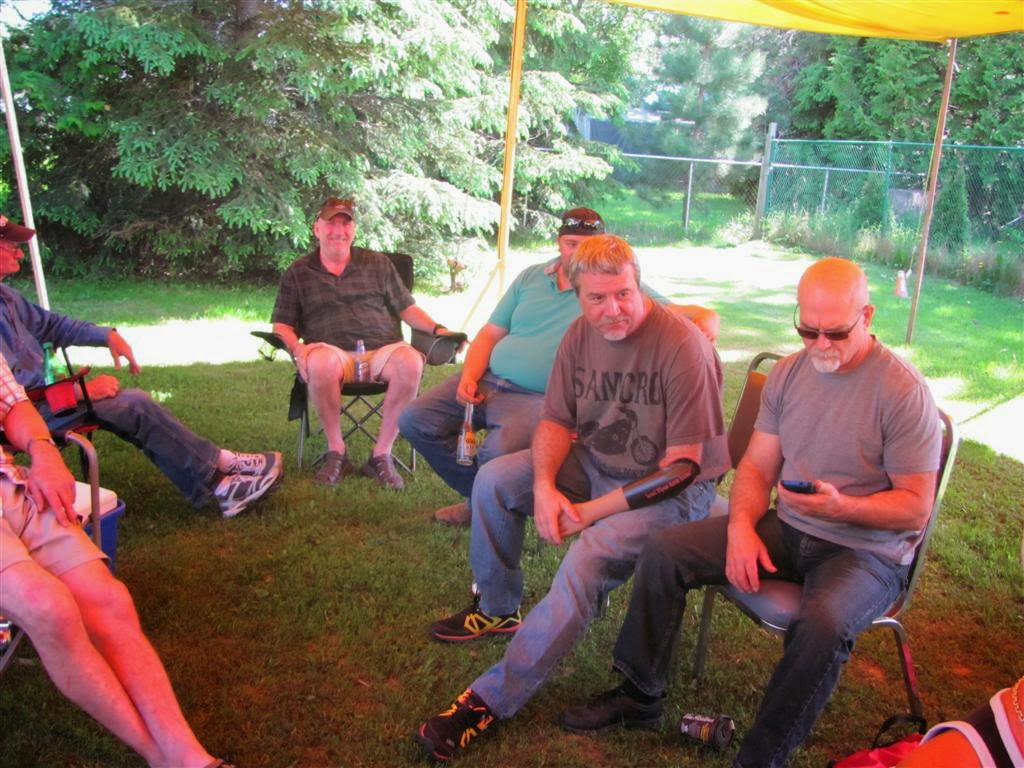 Biker monitoring the outside world

Following the meeting, some of us sat around talking while other played yard games. As suppertime rolled around, we got burgers and dogs cooked by Richard and sampled the varied pot luck spread set up in the kitchen. It was an excellent meal but I forced myself to not overeat.

Sandy and I left early to get rested for the drive tomorrow. A large number of attendees will be catching up with us next week in Tennessee or North Carolina. We got home to find my trailer backing skills were rusty. It took several tries to get into the driveway, a maneuver I usually do in one move.

Sandy did some laundry while I wrote this entry. We meet Gary and Dianne at 6:30 tomorrow morning and the adventure will begin.
Posted by Jim "Skid" Robinson on 6/07/2014