It was Friday the 13th. Back home, motorcycles were heading for Port Dover.

Lying awake at 4:30 AM, I decided to get up and finish some writing. Finally, about 7:00 AM, I wandered down to the lobby to have breakfast. Sausage, eggs and a bowl of fruit was enough to start the day, along with coffee and juice. The breakfast selection here was above average.

The weather forecast was for a good morning but a questionable afternoon. It was optimistic enough that we unloaded the bikes and got ready to ride. I had called Slammer and we agreed to meet he and his good wife at the Tiki Bar at the Geneva Hotel in Lake Lure at noon. This was the place that had been the headquarters for SEVROC from 2001 to 2005.

While we were waiting for Gary, I struck up a conversation in the lobby with two Harley riders who were riding the Blue Ridge Parkway northbound. One was originally from Surprise, Arizona but was now living in Ogden, Utah. The other was from the Indiana flatlands not far from Indianapolis. We talked a bit about roads and places and then it was time for us to go.

After Gary fueled, we rode north on I-26 and got off south of Asheville. A few miles of local roads and we arrived at an entrance to the Blue Ridge Parkway. We rode northeast across Asheville for a bit until we came to the exit at 74A. This section of the BRP is atypical, low elevation and no views because of the proximity to the city.

The ride southeast on 74A was like coming home. This was the last stretch when we would ride to Lake Lure, and we were usually doing the happy dance because we were almost at our destination. After leaving the built up area and traversing the countryside, we started up the twisty section that led to the Eastern Continental Divide. I stopped at the summit for a photo op. Gary and Dianne were becoming accustomed to this type of road and were doing fine. 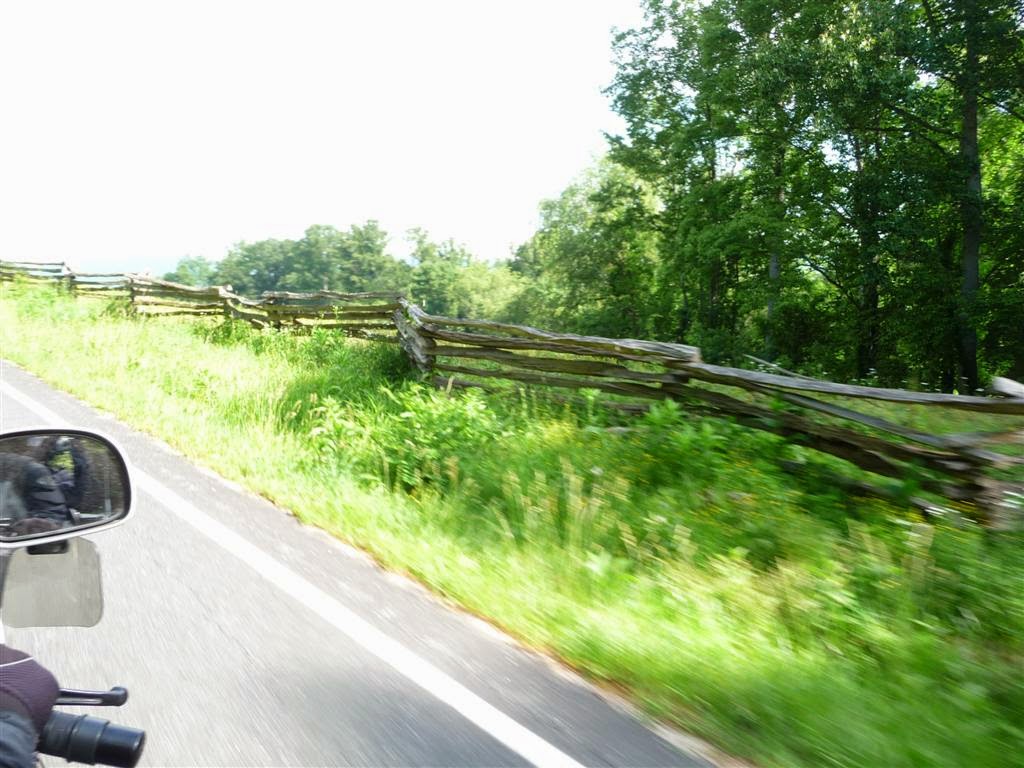 Split rail fences along 74A 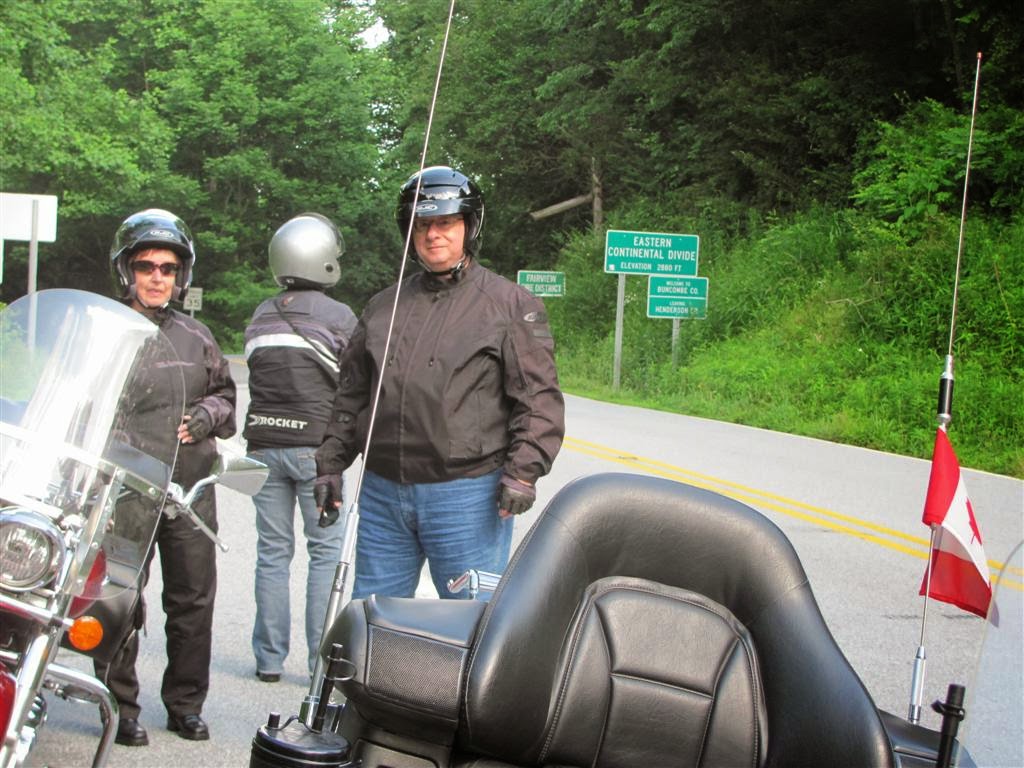 Stopped at the Eastern Continental Divide 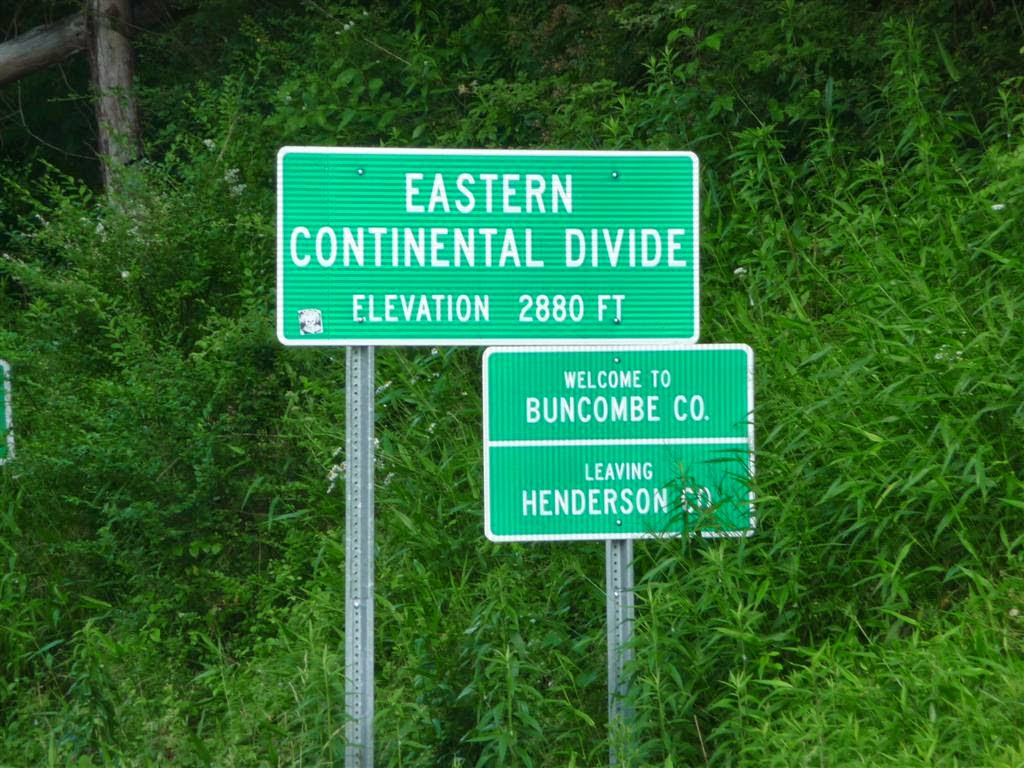 While we were sitting there, a gentleman pulled up with his truck and got out carrying a box. He was relocating a squirrel. He opened the box and the furry transportee was off like a shot. I mentioned that it was illegal to relocate squirrels and chipmunks in Ontario. It seems it is here too, but some people prefer this option to murdering them. Personally, I am fine with justifiable squirrelicide. The fellow said he had gone to blacksmith school in Haliburton, Ontario. I never knew that  there were any more blacksmith schools, much less one back home. 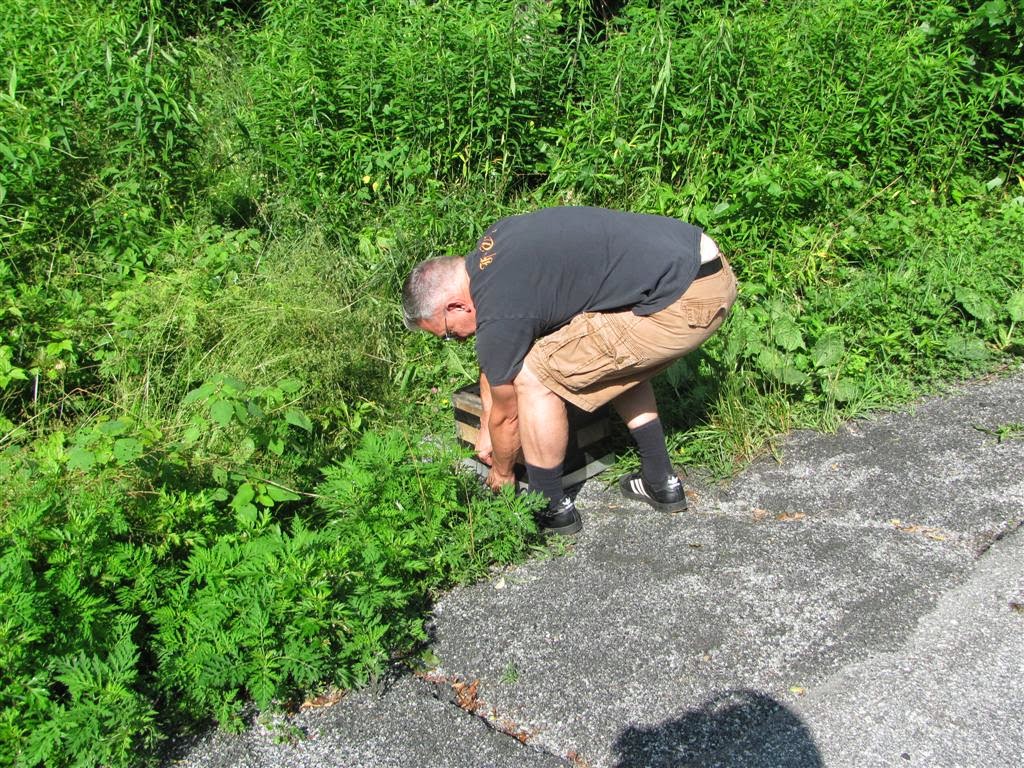 Having gone up one side of the ridge, we had to come down the other. There was an SUV ahead of us who was doing his best to wear out his brake pads. He probably never heard of manually downshifting an automatic transmission to let the engine do the braking. Passing through Gerton, we saw a sign advertising the "Original Carolina Hillbilly". He was sitting out front and waved as we went by. We waved back but didn't stop.

The entrance to Chimney Rock Park is right in the village. We turned in and rode a mile up the hill to the park gate. There, they told us that there was a discount because the elevator had not been fixed yet. We went on in anyway and rode two more miles up some very tight turns and switchbacks to the parking lot at the base of The Rock. The bike, as usual, heated up on the slow climb but I ignored it.

We didn't climb the stairs to the top of the spire. Instead, I got into a long talk with John A. Mason, who was doing a great job playing a hammered dulcimer. We talked about mountains, travels and the trials of being a libertarian in our modern world. 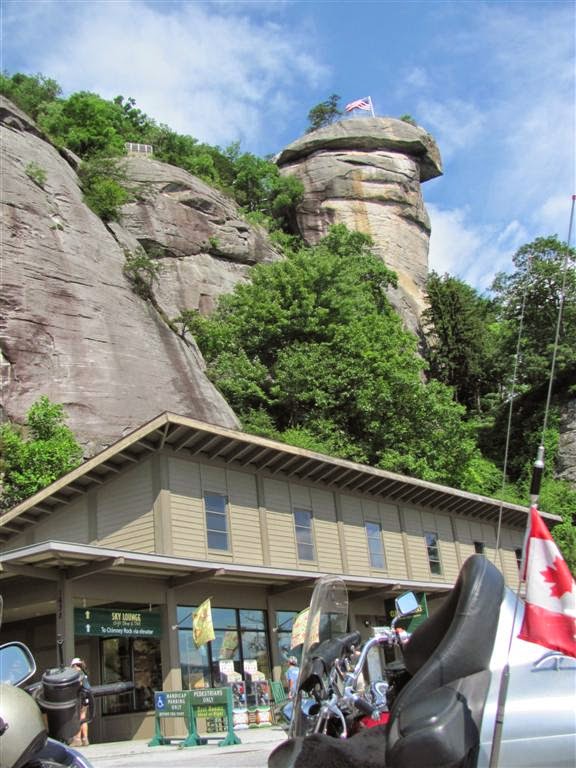 This was as high as we got 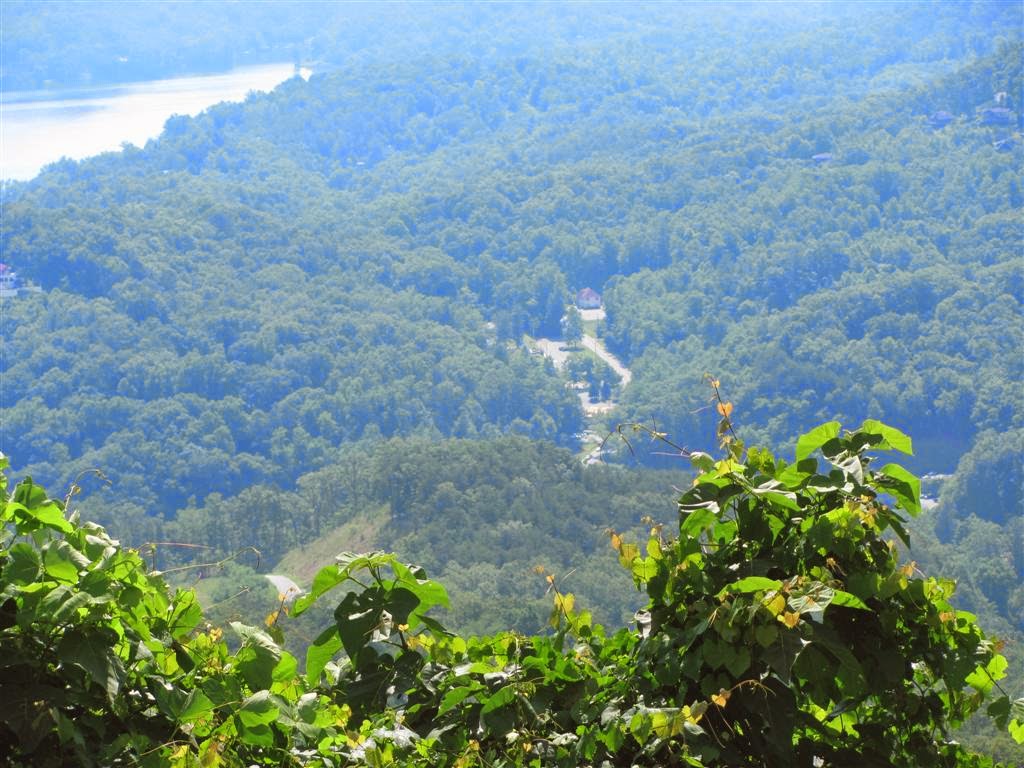 It was pretty high 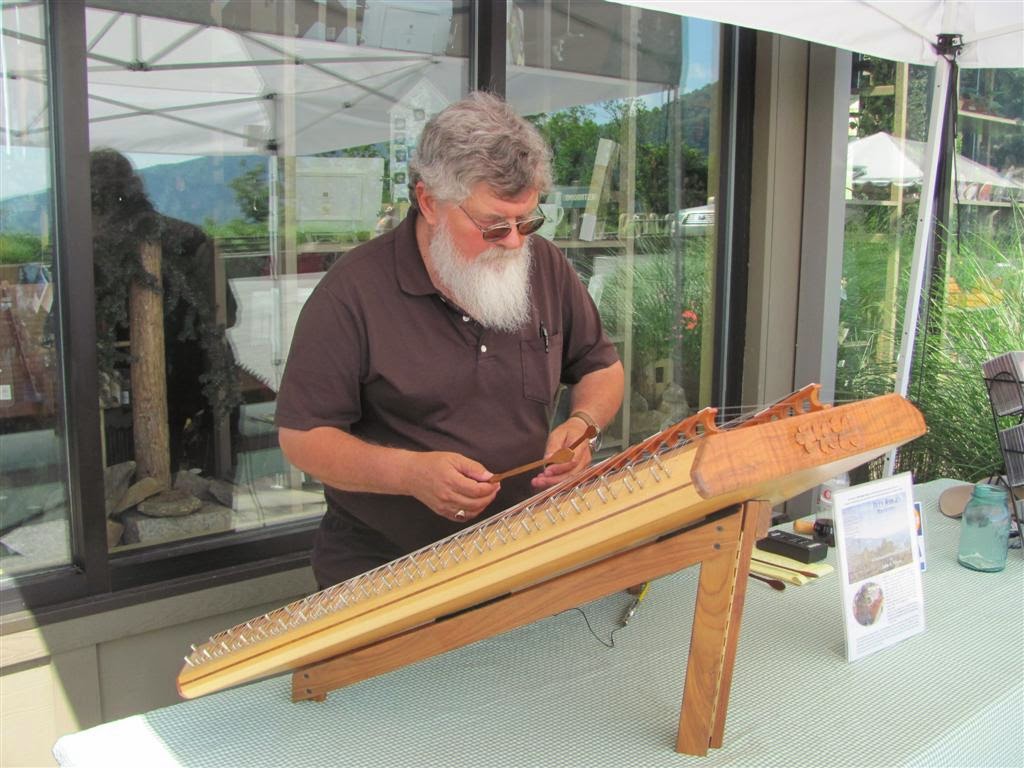 John A. Mason and his hammered dulcimer 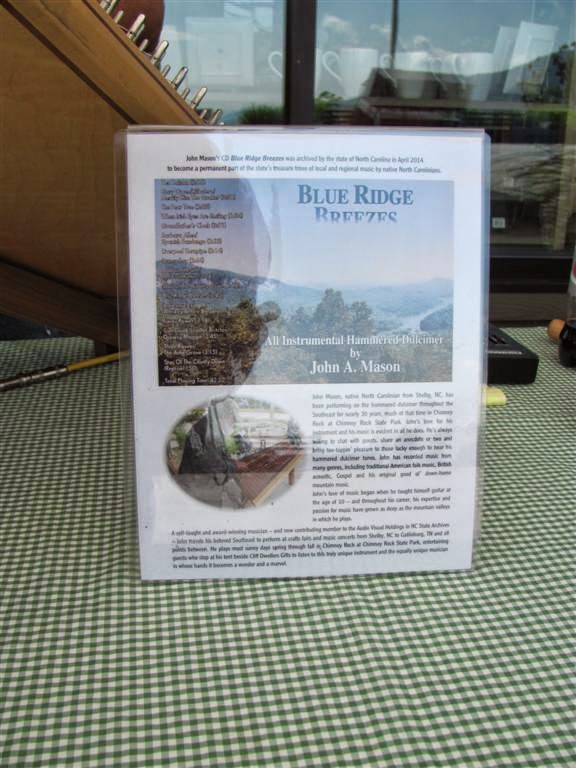 John has a number of CD's

While we were up on the mountain, the two Harley riders from the hotel this morning rolled up. It seems I had mentioned Chimney Rock and they decided to give it a look. Being more ambitious than we were, they headed for the stairs to the top. 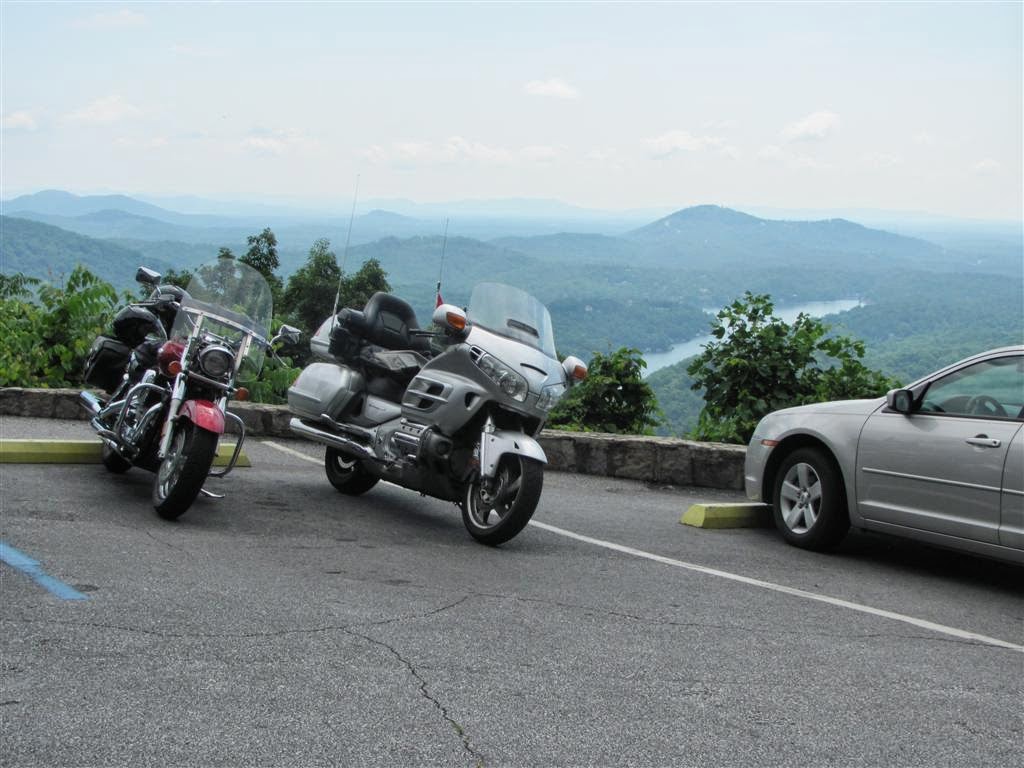 Bikes are resting after a hard climb

We started out down the hill and I almost got creamed a few corners from the top. The speed limit was 15 MPH so I figured I could cut a left hand hairpin and see anything coming. What I did not count on was  a young lady in a minivan charging up the hill at close to 30 MPH. She met me as I was at the apex and I had to do a dodge and weave to avoid becoming a hood ornament. My fault for not allowing for the possibility of her poor judgement. Gary said she was virtually stopped as he went by.

We headed over to the Geneva and parked in front of what had been our old room. It was a bit early so we repaired to the Tiki Bar, which hadn't changed much, and ordered some cold drinks. Slammer and Barbara showed up right at noon. After introductions, we settled down to catch up on things. Slammer is one of the nicest fellows you could ever meet, belying his past career as an aerial warrior. The food was ordered, came and was excellent. Slammer picked up the checks, for which we were very grateful. Now he HAS TO come to WWR8 in Bryson City in August so we can repay the favour. 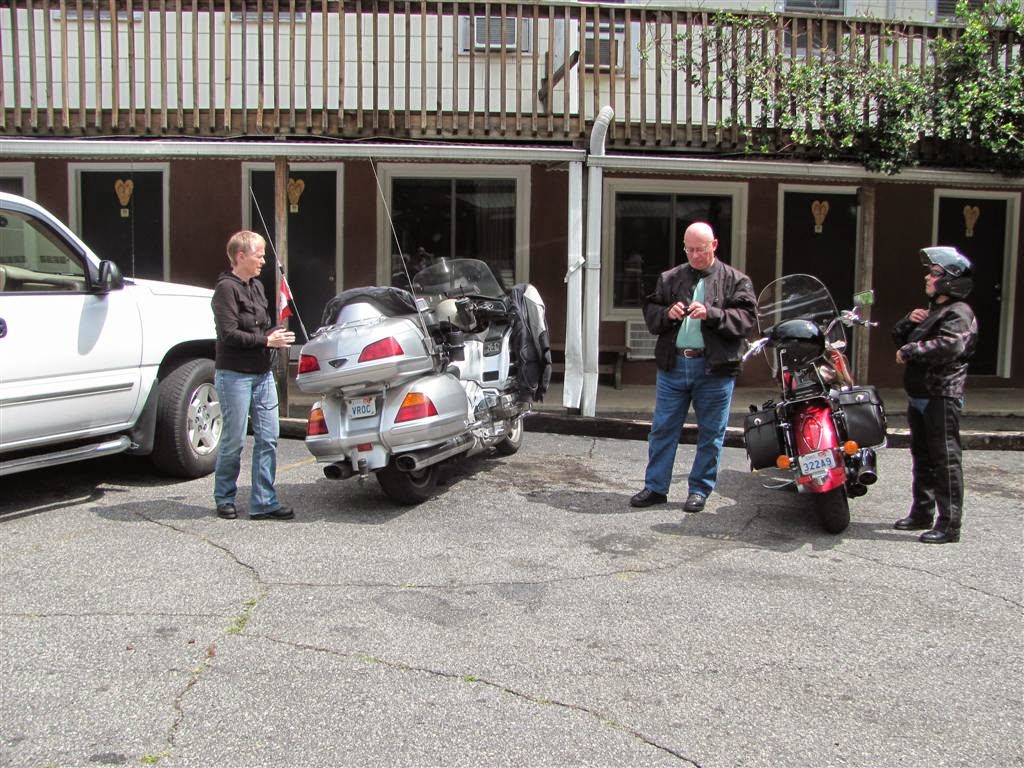 Familiar parking spot at the Geneva 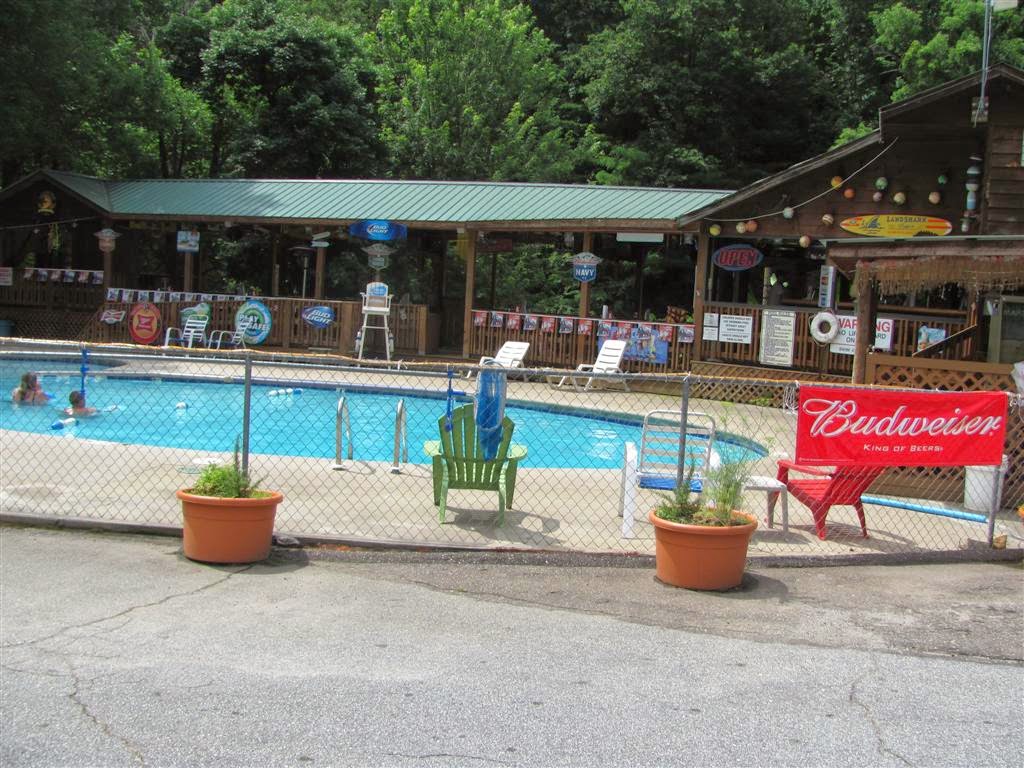 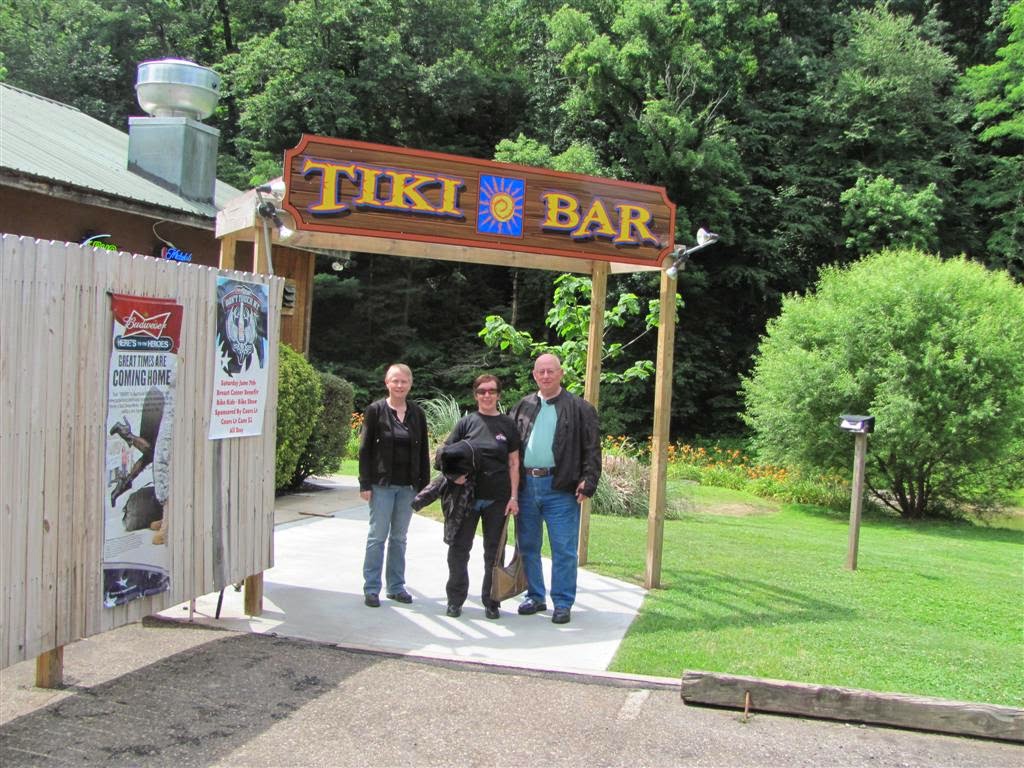 The Gateway To Lunch 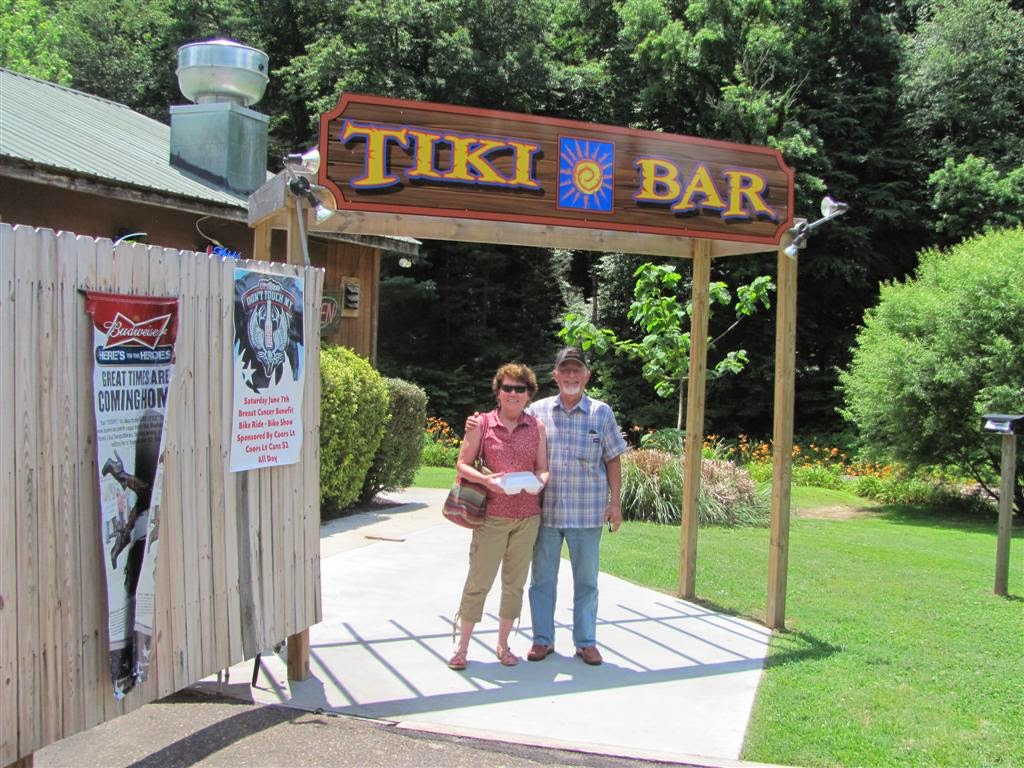 The inimitable Slammer and the lovely Barbara 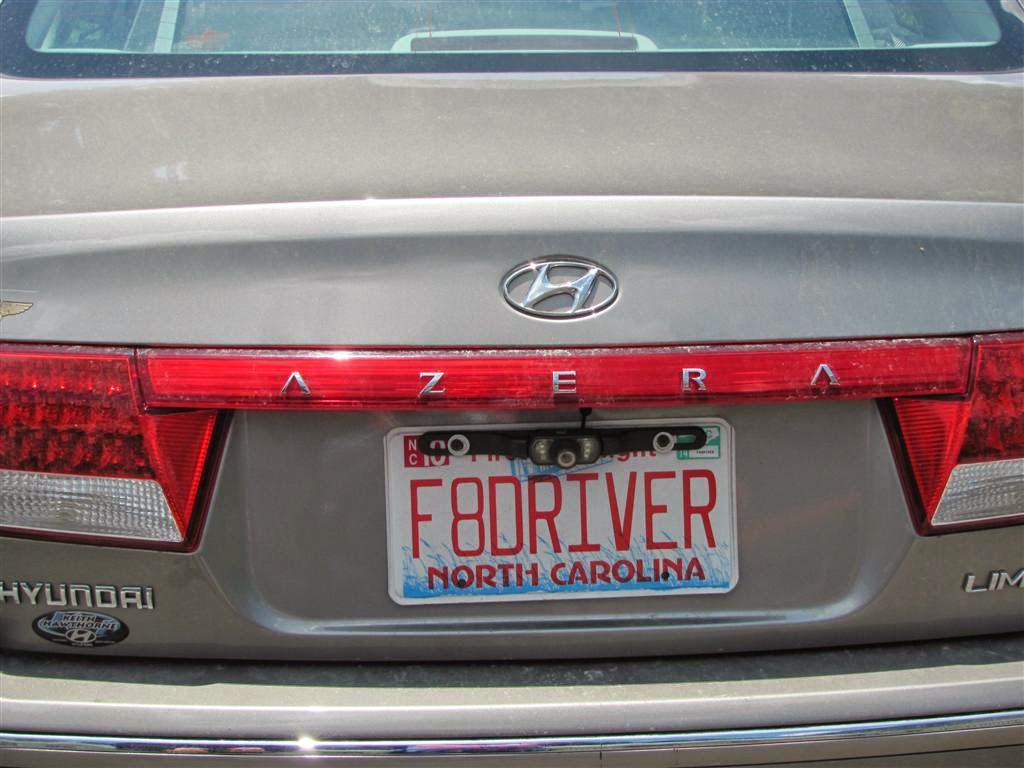 Lunch done, we rode back down 74A to Bat Cave and turned left on Highway 64 to Hendersonville. This path also crosses the Eastern Continental Divide and I though maybe we should stop at the summit and look one more time for the tail light/license plate that Flip lost off Frankenbike all those years ago. But the skies were darkening to the south and Flip no longer has that particular ride, so we kept going. 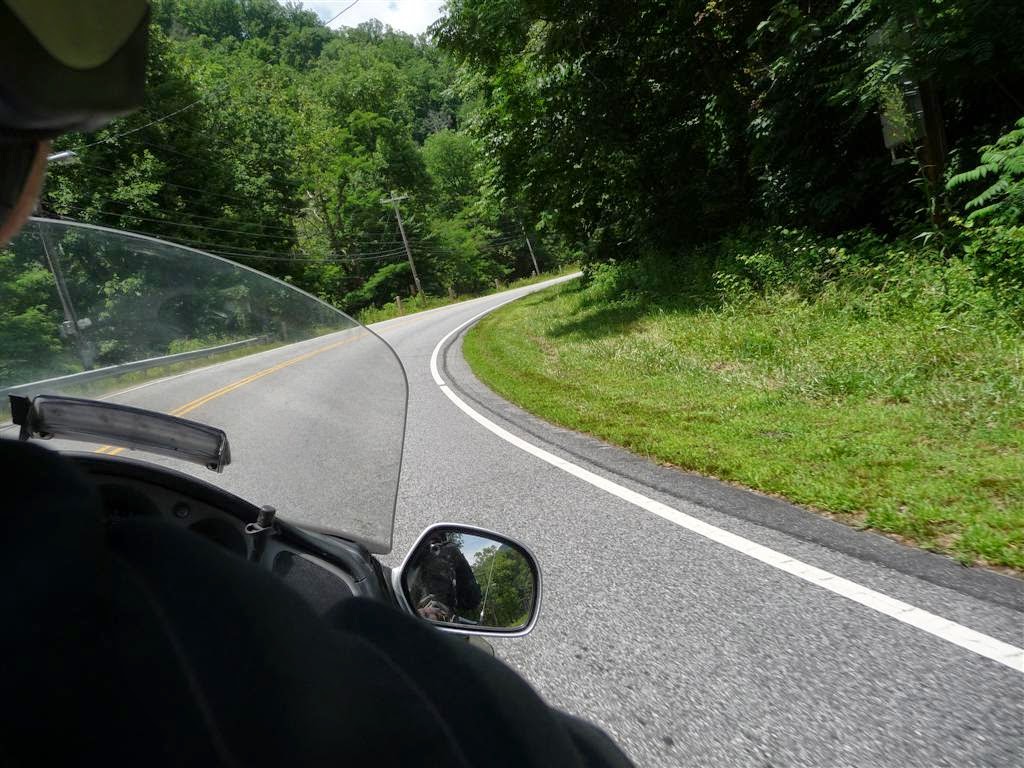 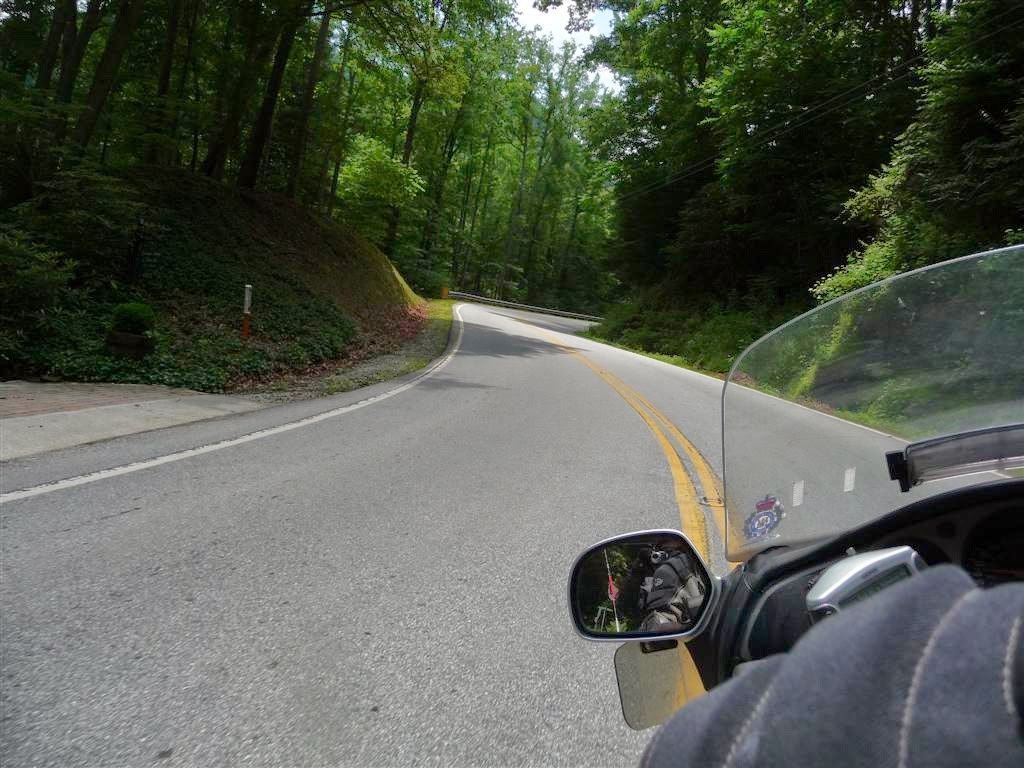 We rode down into Hendersonville, although Gary lagged because there was a deputy following him. The skies got darker still. Not two minutes after we parked the bikes under the awning at the hotel, it started to spit. Gary is starting to think that I am some kind of meteorological genius. I know that I have just been lucky. 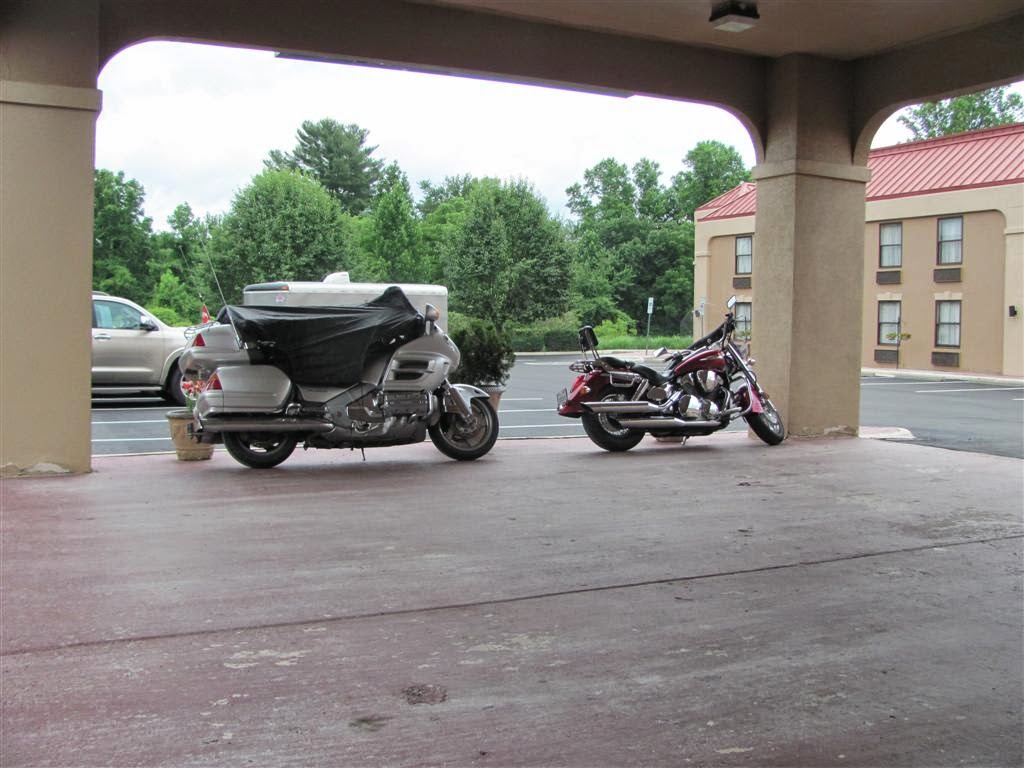 Bikes under cover as the rain begins

I did some work on the computer while Sandy napped. Then I napped. When I woke up, Sandy was gone and thunder was booming. I found her in the lobby with Dianne looking at books about the Blue Ridge Parkway. Coffee was free all day so I got one and went out to watch the downpour.

It was close to supper so we checked Tripadvisor and then just decided to go to Applebee's. This was another first for our companions. It was busy due to grads so we had to wait about 20 minutes. While waiting, I met a man from Maine who works with trees and has another place down here. They called us soon after and we sat on stools at one of the round tables. I had a small steak and shrimp with roasted potatoes and broccoli. Sandy had an Oriental Chicken Salad. Both were good, as usual.

Back at the hotel, we agreed to meet for breakfast about 8:00 AM. The weather forecast for tomorrow is good. We'll see if it holds up before we finalize our plans for the day. 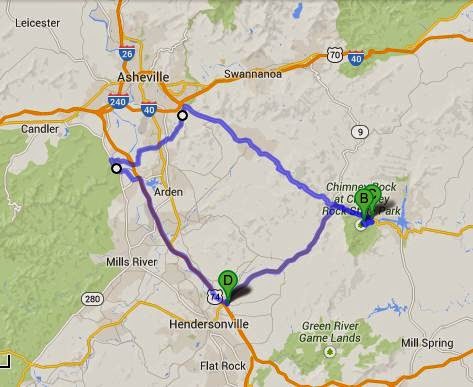