We were up at 5:30 AM, packing the last of the gear. I made the mistake of looking at the extended weather forecast for the southeast. It looks like a major weather system is moving in and may be in play for the next ten days. Oh well, you pay your money and take your chances. 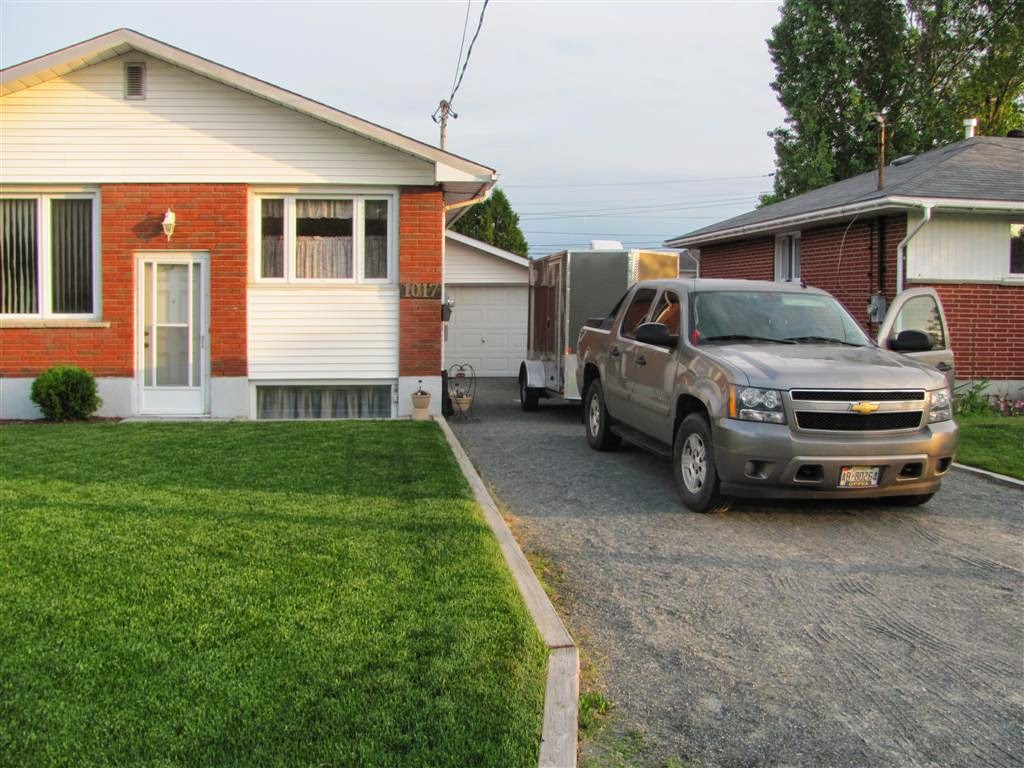 We left the driveway at 6:20, stopping for fuel before arriving at the rendezvous point slightly after the appointed 6:30 meeting time. Gary and Dianne arrived a few minutes later and, after a quick stop at the adjacent Tim Horton's, we were on our way. I gave them one of our GMRS radios so we could stay in touch on the road. 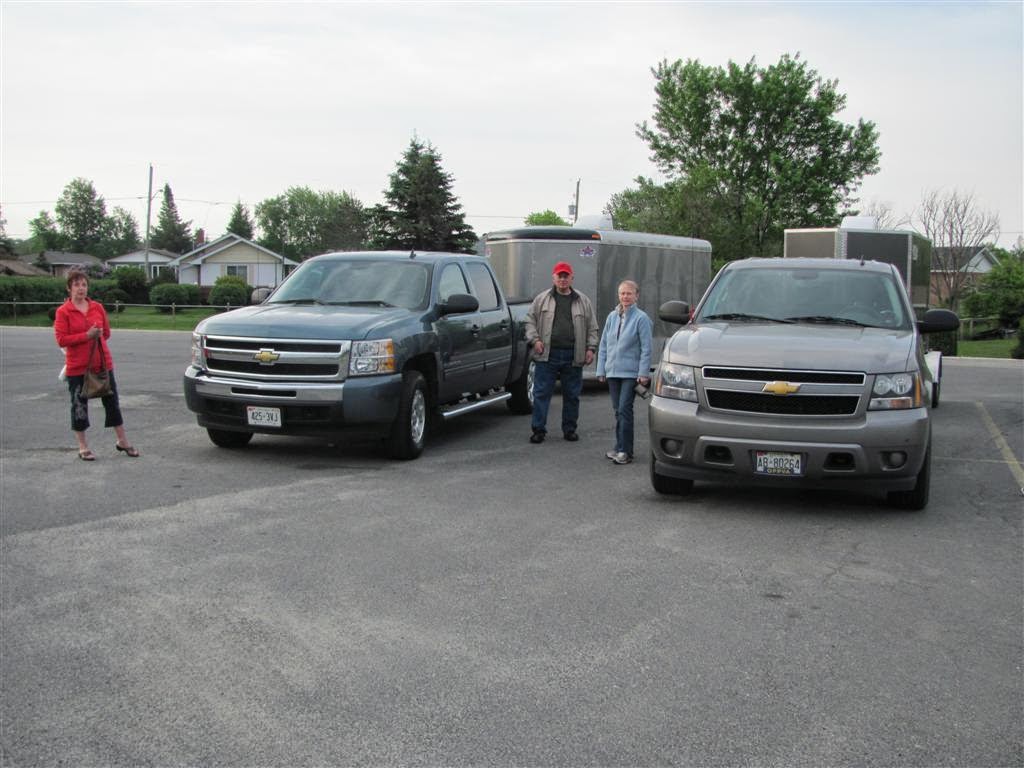 We hit the road about 7:15 AM with virtually no traffic. I set Beckley, WV as a destination and the GPS told me that we would be in around midnight if we rolled straight through. Then I remembered I had set the unit to avoid tolls, so I changed that and it revised the arrival time to 7:12. I am not sure how it was routing us around the NY Thruway and the WV Turnpike but it must have been wild.

We stopped at the French River Trading Post to check the trailer hubs and put the torque wrench on the lug nuts for a final time. All was good and the bikes were still well tied down. The flies, however, were obnoxious. 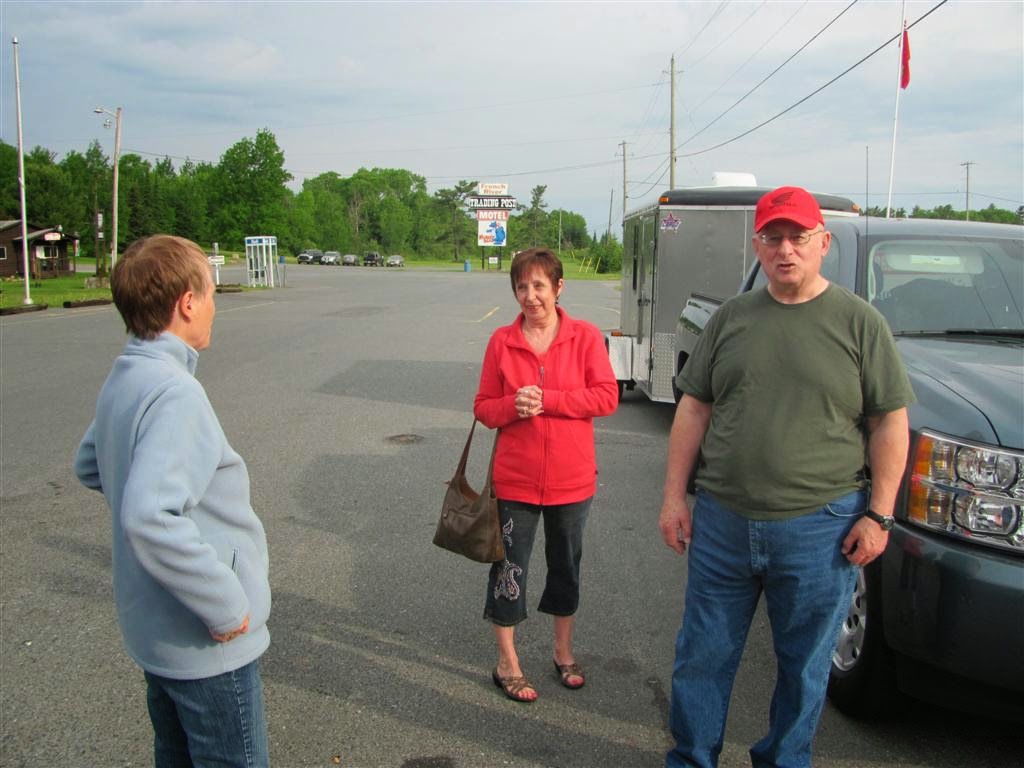 We made a bathroom stop at the Tim's south of Parry Sound and then continued on. I noticed at Waubaushene that the MacEwan had gas for $1.359 compared to $1.436 that I paid in Sudbury. We stopped just north of Toronto at the Maple Service Centre and fueled. I took $10 more than Gary despite us having the same 5.3 L Chev engines and his trailer being bigger. Either my holding the speed on the upgrades really hurt or his six speed transmission made a big difference. I believe the latter was the case.

We took the 407 ETR all the way to Burlington and then crossed the Skyway on the QEW. Lunch was Subway at the Casablanca Road exit in Grimsby. The four person tables were occupied by pairs of young people, two to a table. All that was left was a two person table so Gary and I let the ladies sit. He set his GPS while I swapped phones, changed greetings, switched credit cards and installed the EZ Pass transponder in anticipation of the border.

I was concerned as we approached St. Catherines and the traffic started to back up, but it was only temporary and we were soon rolling again to Fort Erie. Gas at the Flying J in Fort Erie was $1.299. Amazing. The Peace Bridge was clear and I lined up on the leftmost Customs booth because it was easiest to get to. The agent said I should have taken the RV/Bus lane because it had more room. He said that it specified trailers and I respectfully corrected him. Then I apologized for being in the wrong lane because he does have a lot of discretionary power. He looked in the trailer and sent us on our way. There is a new chain barrier forcing a hard right turn out of the booth. I made it very carefully, remembering that this was where I scraped the motor home a few years ago.

There was no place to wait for Gary so I started down I-190 as slowly as I dared. Just before the I-90 exit, I was adjusting my mirror and got off one stop too early, putting me into a residential neighborhood. Around the block and back on the freeway, I took the correct exit and found a spot just before the toll booth to pull over and wait. Gary arrived moments later and we headed through the toll booth together.

The temperature had been about 20C in Toronto but dropped to 14 in Niagara Falls. It was back up to the high 20's in Buffalo but started to drop as we moved west. It looked like we were crossing a front and, sure enough, it started to rain. Then it started to pour. Then it really came down. I abandoned plans to stop at the Angola Service Center because we could barely see it in the downpour. 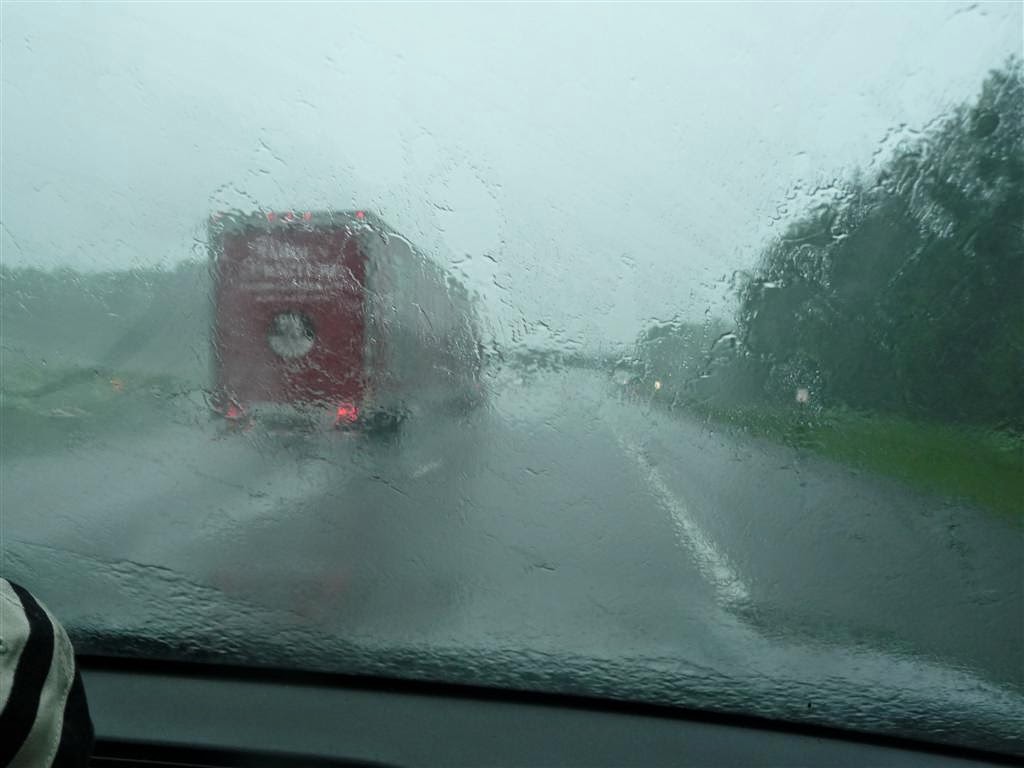 Rain on the NT Thruway 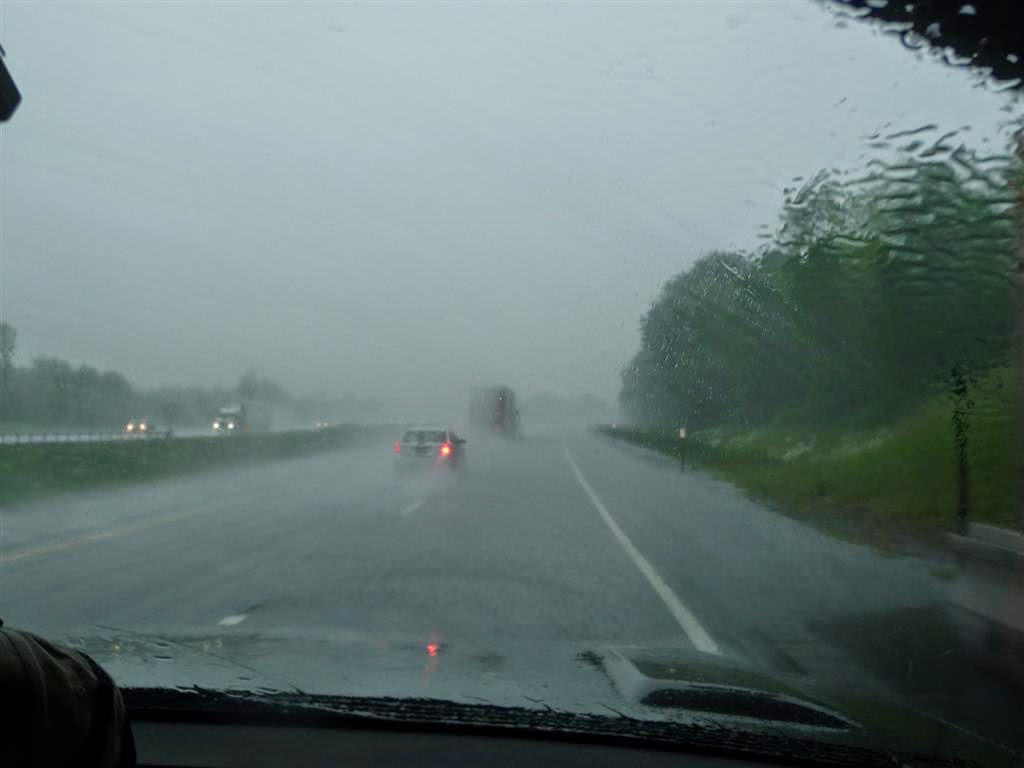 The photo doesn't do it justice

The rain had eased considerably by the time we reached the end of the Thruway. After clearing the last toll booth, we stopped at the Pennsylvania Welcome Center where I picked up a couple of the hotel coupon books. From the state line to Erie, fog enveloped the road. 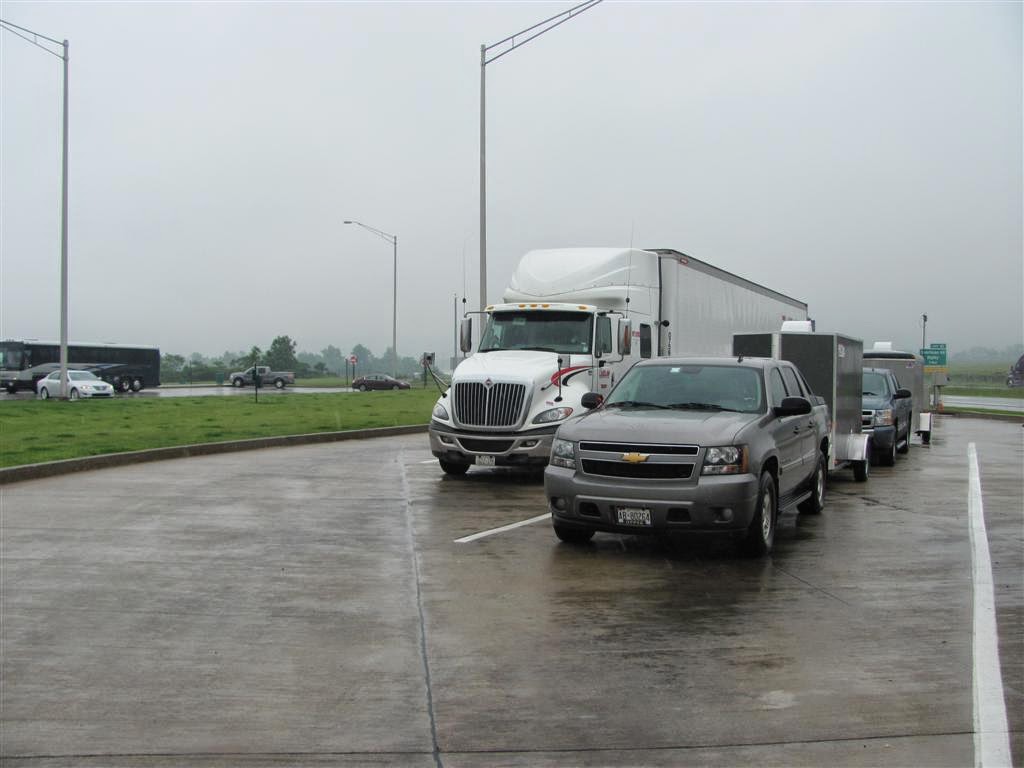 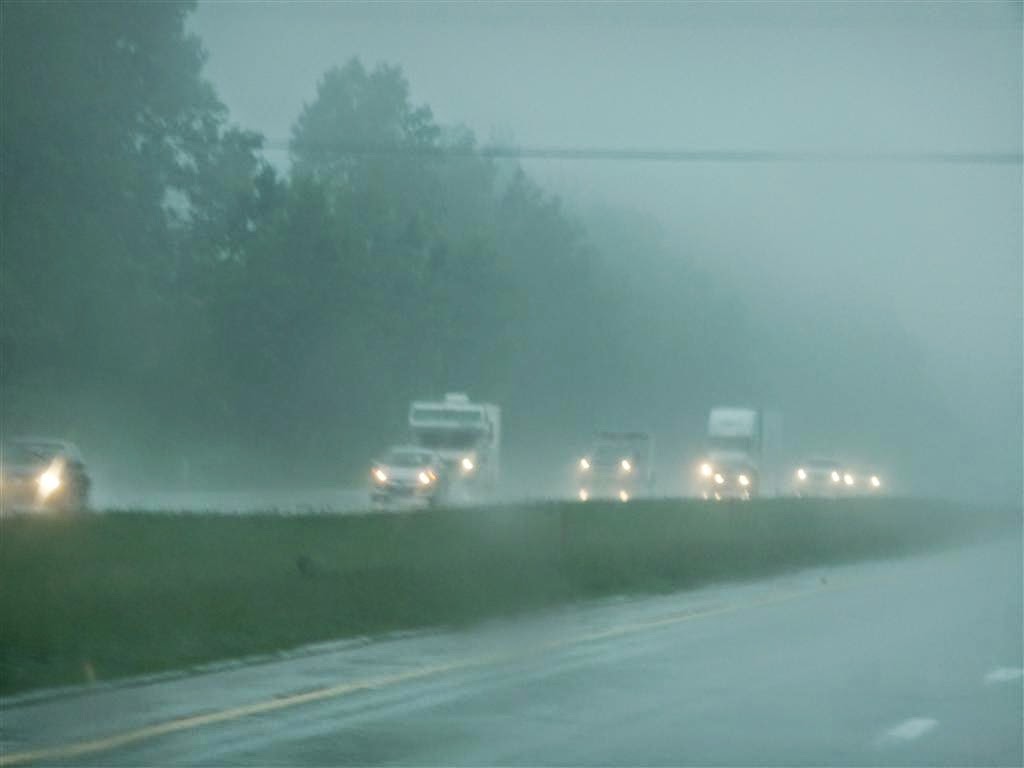 We took the I-79 exit just past Erie and followed 79 to Grove City where we fueled at a Sheetz. We could have pushed on past Pittsburgh but it was already 5:00 PM, we were within striking distance of Beckley tomorrow and we had coupons for the Super 8 here. They honoured the coupons so we settled in for the night. 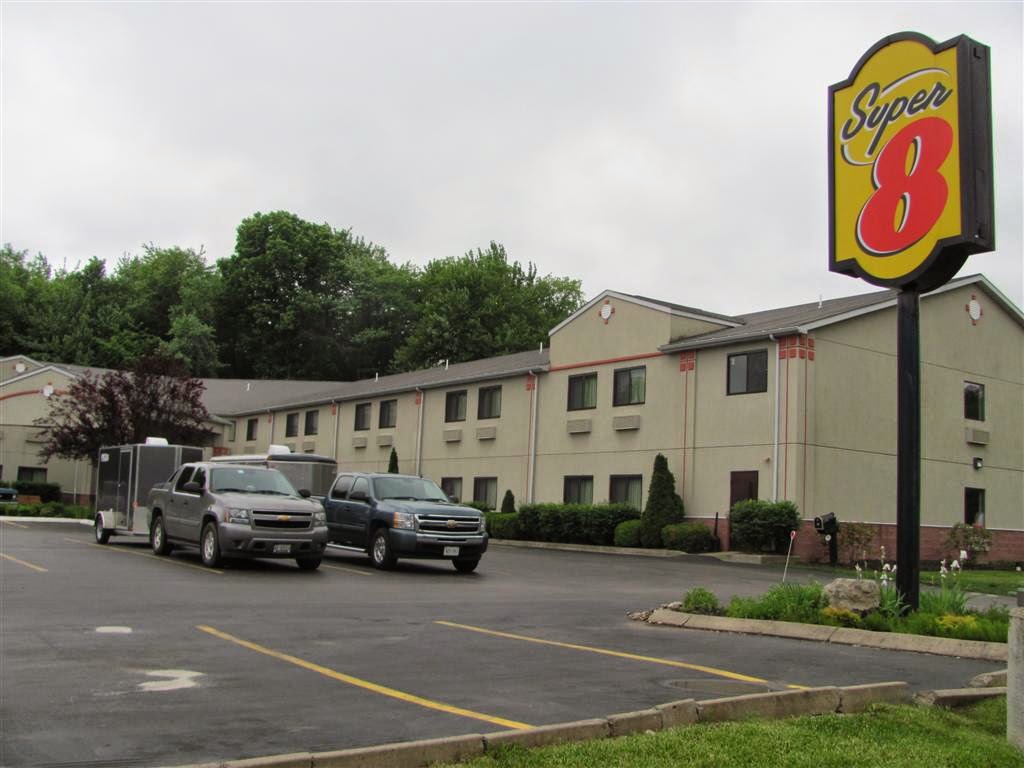 The only drawback to the Super 8 was that it was about a half mile from any restaurants. We decided to walk to supper since the rain had finally (almost) ended. There were no sidewalks and the paved shoulder ended at Hoss's Steak and Sea Family Restaurant so we gave it a try. It was OK. 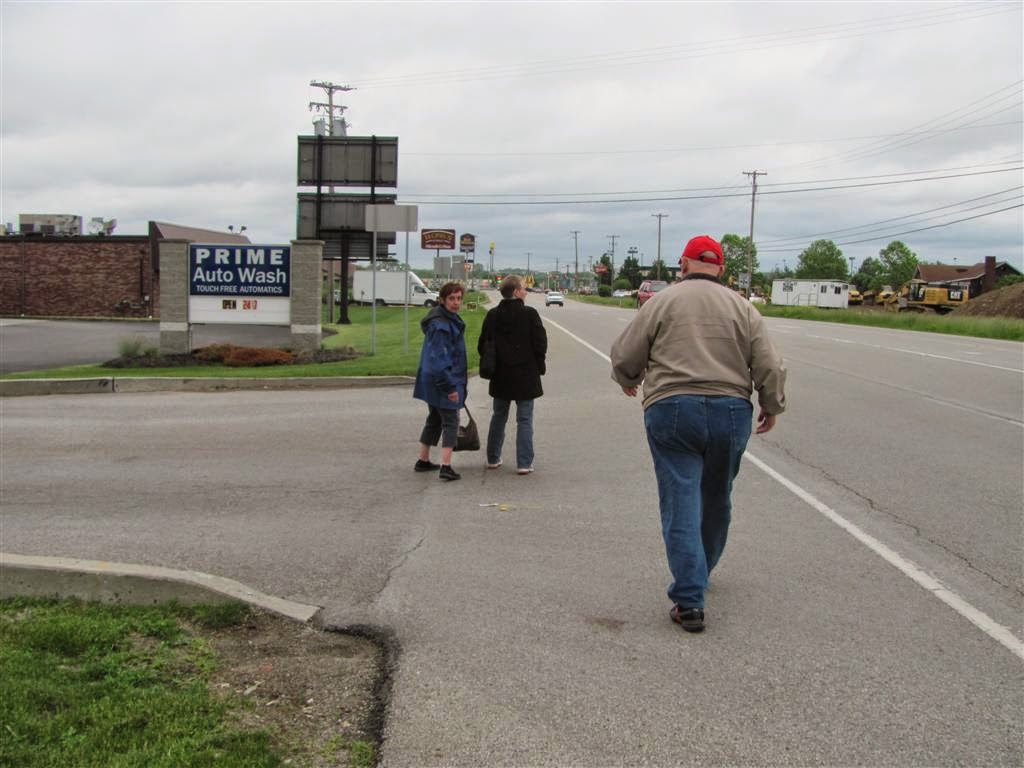 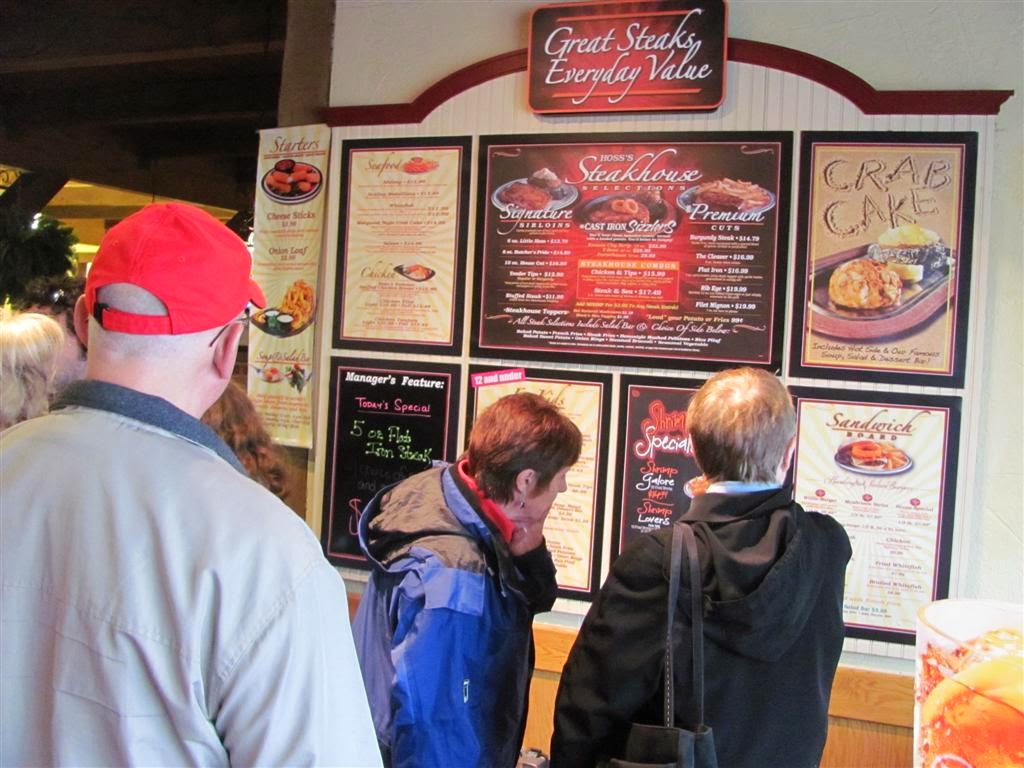 Considering the menu at Hoss's

After supper, we walked back to the hotel. Dianne was a bit concerned about the twisty roads we were heading for and I assured her that people would be able to ride at their own pace. The mountain roads are dangerous when people don't know their limits. Then I played them the Ballad of the Gap, probably the most enjoyable motorcycle video I know.

I started the blog entry for the day but was pretty tired and stopped after I got the map done. After reading a few pages on my Kindle, I turned the light out just after 10:00 PM. 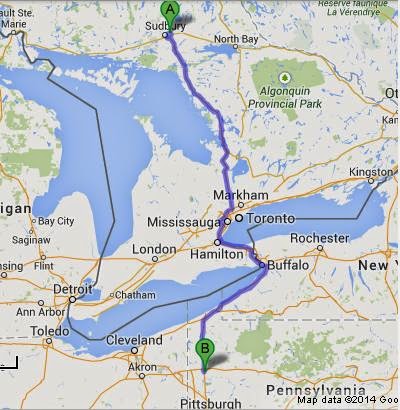 Nice to have your blog to keep track of you with. Sorry about the rain. Hard to relate to that wet stuff :-) Hope your trip is really enjoyable!

"The most enjoyable motorcycle video I know..."
That's one of the best comments ever! Thank you for sharing it, I'm glad you enjoyed it.
Mark Faulkner